The Legend at the IG London Nocturne

I woke up this morning excited but well rested. This whole week I haven't been sleeping well but I did last night. I was still not sure which cameras to bring but in the end I brought my trusty Lumix TZ5 & my fisheye key camera. I wasn't too sure about how safe my equipment would be but later on I would have preferred to have brought my Canon 5D Mark II.

As I got into the car park and unloaded "The Legend" and put on my outfit. I thought I make a big entrance into the ExCel Exhibition Centre. This was the first time I had worn the full on outfit since BWC 2012 and dang it felt good. A few people passed me in the carpark and as always commented on my full on "The Legend" mode and said they would be cheering me on in the  IG Nocturne Folding Bike Race later on.

I rode the short distance to the ExCel entrance and was ticket touted but just told them I was competing and got free entry >:P As I entered the main gates the crowds started to notice me. I was pretty hard to miss as you can imagine. The "Bumble B" Effect was in full force dear readers.One of the security people commented on my in his words "Bad Ass" outfit and pointed me to Riders Registration. The ladies there said that I had a best outfit for the folding bike race.

Called Mr. Orange and he informed me he was near one of the entrances down the far side of the ExCel and I made my way down. There where 2 shows, The Boat Show as well as The London Bike Show going on at the same time so there was quite a number of people walking about visiting the shows. As always "The Legend" attracted a lot of attention and I just nodded and smiled as I made my way down. A few said they would be cheering for the Bumble B when us racing.

Met up with Mr. O, Mark W & friend, we had a little look around and then made our way to the riders area, which at that point we found out we could have a good ride around the track to get a feel of it. I got a few laps in and was really getting a feel for the Schwelbe Stelvio Light tires I'd whipped on the night before. I have to say I'm VERY impressed by them as I had no idea how they would operate. Definitely the kind of tires I would use on future racing type events esp indoors, I may have a look at getting Kojaks as they have better puncture protection just to be safe.

After getting a few good solid laps we decided to get something to eat so we had time to make sure it all settled before the races began. Also took the time to have a little walk around The London Bike Show stands to see what was on show. to be honest I wasn't really impressed with the show itself, maybe I've been to too many trade shows in the past and felt the "buzz" wasn't there anymore. Checked out the Brompton stand of course and liking the new limited edition bike they have on display.


I did catch alot of attention as I went around and there was a awesome looking carbon bike I spotted which was in my colours >:D As soon as I got there the people on the Foffa stand said the bike was all me ad they had to take a few photos of their bike and me together. a perfect match >:D They even offered me a discount but I'm a Brompton man though and though. 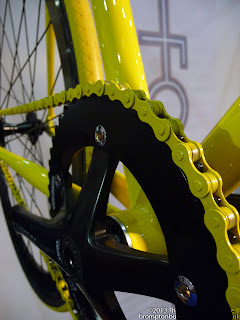 Well enough of that eye candy. Time for the LBC racers to get back into the heat of things and get a few photo before we build up too much of a sweat.


Me and "The Legend" headed out for some more warm up laps, this time I mounted the keycam on the top tube and filmed a few laps, which I'll post after I've processed the footage.

Before I knew realised it was time to get ready for my heat. We all got to the start/finish straight and picked a number out of a bag, I got a number right at the start line not good as I would have to run though most of the bikes to unfold before I even started racing.
The race finally started and I ran to The Legend and unfolded and got riding in a good time. In practice I made sure I nailed my cornering which helped alot and I went out and did the best my best. In my heat of 30 riders I came in 23rd and the cut off to get into the final was the first 15. I'm happy with my first proper full on race.

I know quiet a few from my group took photos and maybe some video so I will post that when I see it but I damn well has a good race. I even remember when I was going around the commentator was commenting on my wicked outfit a few times and this made me smile and keep on going even harder.

While I was there I also got interviewed my a photographer of Nocturne and a few good action shots I have seen. I will be posting those as soon as I get hold of them.

Enjoyed the day and I want to go out doing some serious riding tomorrow but the weather is still bad here. I know I got a hell of alot of training to get under my belt to up my fitness levels big style, BUT someone has already said that I looked a hell of alot different a rider to when I was riding on the BWC 2012 so that I'm happy about even more. Onward and upward....
Posted by Brompton Bumble B at 23:39