Getting some sea air

We have been to Brighton a couple of times before but this time instead of cycling all the way there and catching the train back to London, we going to take train to Brighton & actually ride around Brighton itself, under the white cliffs right next to the sea.

This was billed at a 40 mile ride which was going to be an easy pace so we could take photographs & take in the lovely cleansing sea air.

The weather forecasts where foreseeing it to be pretty windy and wet so I packed our over-trousers & shoes with extra socks and gloves so I had something dry to change into. Learnt that from Anne P on York ride which was a pretty wet one.

Just as I was heading out from "The HiVE" I discovered that BumbleB's rear rubber flap on his mudguard has disappeared. I figured that it probably unscrewed itself during the Critical Mass ride the night before as the reminding mudguard wasn't broken. No biggie & not expensive to replace, I may ever have a spare one somewhere. 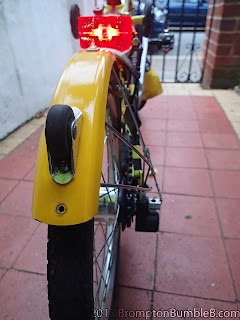 Fuelled up with porridge & 2 bananas we headed to Victoria where we would be travelling to Brighton with my cycling partner in crime, Mr O.

Found Mr. O pretty easy once we arrived at Victoria Station & checking the departed boards we where discussing my experiences with going "Clipless" & up coming rides in the near future.


Arriving at Brighton Station dead on time we found a quiet spot to wait for the others who where coming on slight later trains. Finally with the LBC gang (Alan B, John M, Andy L & not long after David P and Anne P) arrived and our group was complete. all together we made our way past  Brighton pier & onwards to the under cliffs.

Finally getting down to the undercliffs itself with the high winds & VERY choppy sea. You could feel the salt in the air which really cleared out your lungs.

The entrance to the Brighton Undercliff there was a notice about the evidence in the layers of rocks in the cliffs showing the last  250,000 of yrs of climate change. 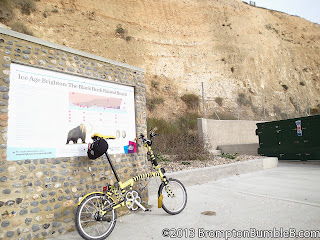 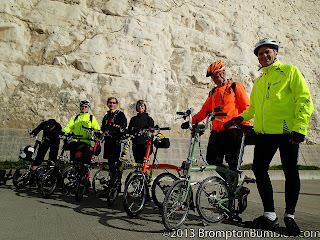 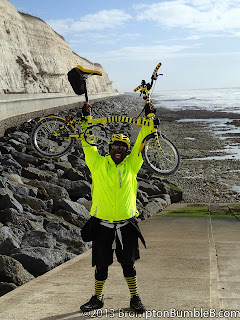 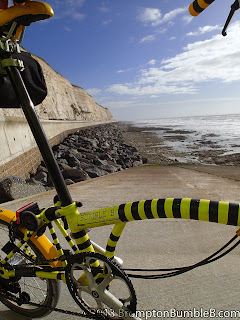 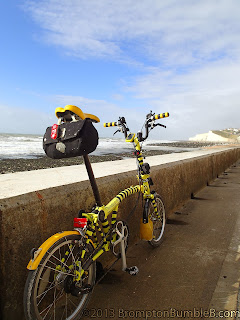 On our way to the great little pub "Coach & Horses"recommended by Alastair G of the club that wasn't on this ride we was heading up abit of a hill. It was pretty steep but I still managed it without putting a foot down, just a little slower than the others.

But that wasn't the funny part, on the otherside was the going down hill which you would think would be easy right?

Nope not on this ride, because of the high winds it was actually blowing us BACK so we had to pedal harder going down the hill that going up. VERY odd way to ride if you ask me. 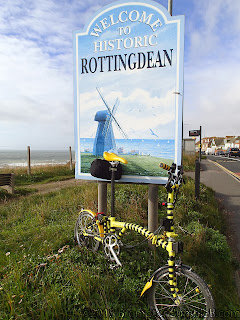 After a damn fine lunch we headed towards Shoreham Airport which Andy L promised to be a very interesting building to view. 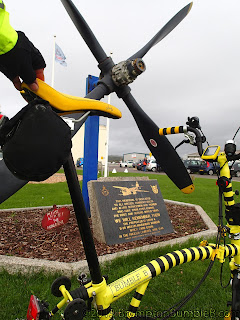 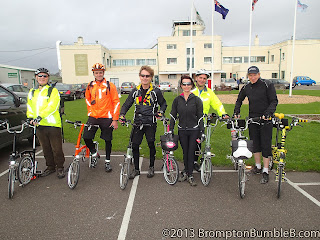 I was promised cake which I have to say kept my legs going as they where starting to burn from fighting the head wind for the last couple of hrs. It was the only thing that kept me going and I have to say the cake didn't disappoint.
At first I was going to have a Chocolate cake but I spied Mr.O with a Velvet Cake which just too too damn good, so I had to try some. What a great choice as the cake was AWESOME.

Sorry but the next image is just too good, I'm only just stopping myself from licking the screen right now as I write this part. 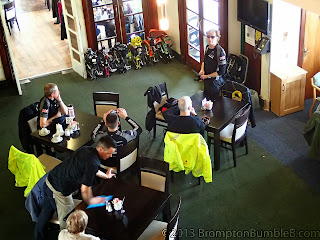 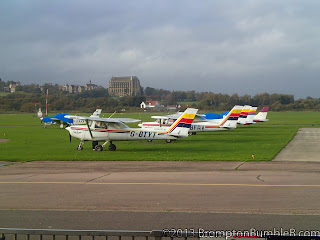 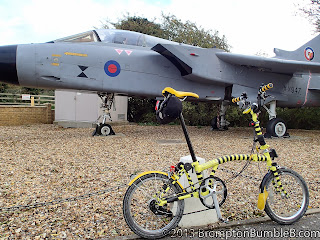 Now we only had to make our way back to Brighton Station to catch our trains back to London, which should be alot easier as we would have the wind behind us. Alittle way back Andy L parted from our little group as he had his car pretty close by.

Not long before we hit the main part of the Brighton sea front something happened. We was trying to find another way around a walkway that had been closed and David P was figuring out another route around. For some reason I completely forgot about "clipping out" and I ended up hitting the deck. It was my first fall since being clipped in, luckily I do know how to fall without hurting myself too much but most of the gang missed it, sparing my blushes.

We continued onwards towards Brighton and along the seafront. We went past some of the colourful beach huts right along the beach front and I just had to find a yellow one and get a shot of Bumble B with it. 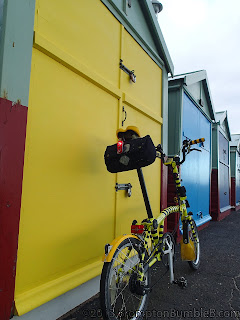 We made it back to near to Brighton Station with over 1 hr to spare for some of us but others had open return tickets so headed to the station for which ever trains they could catch. Me, Mr.Orange, David P & Anne M decided to head to a great little coffee shop. We was warmly greeted  by which I can only assume was the owner of Milk No Sugar

I spotted a Nuttella Mocha which sounded wonderful and I have to say it damn well WAS >:)

The guy in the shop actually remembered BumbleB from when we was returning from the Brighton night ride a few months back. I gave him one of my cards and thanked him for the great Nutella Mocha. 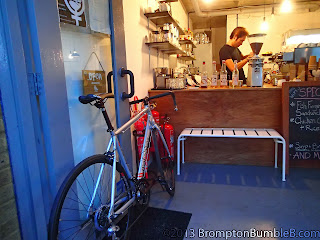 It was time for us to catch out train back to London, we managed to get good places for our Bromptons on the way home.
The train back to London took us past Clapham Junction where everyone but me got off as it was nearer to their homes/parked cars etc. Said our good byes and I continued on the train to is final stop Victoria Station.

Another great ride with the LBC as always, great navigation from David P & great company as always. Even with the high winds & sea air which was actually pretty good for the lungs but not so good for the Bromptons. I will have clean BumbleB with fresh water as the salty air can cause corrosion if left untreated.

P.S. Almost forgot to add that when we was leaving Milk No Sugar I discovered that my left shoe cleat had loosened up to the point where the cleat itself was moving about in my shoe. No wonder I was having trouble clipping in & feeling slight foot movement when going up the hill to Brighton Station. Luckily I had my alley key set with me to tighten it up and the other one was a little loose too. David P suggested I'd use a tiny bit of super glue to make sure it didn't happen again but also super glue is brittle enough so it can be broken when I may need to un screw the cleat if needed in future

This would be our first ride with the SPDs and a good lesson in "clipping in & out" quickly in fast changing situations.

We decided to ride from "The HiVE" to the meeting point of Waterloo Bridge, South Bank.

Powering my way though the London traffic felt awesome, I felt more connected to BumbleB than every before, we finally became a single entity, a complete LEGEND.

Finally made our way to Waterloo Bridge and then had to find exactly where the meeting point was. Finally found my cycling friends, Jenny H, Samantha S, Anthony L & Susana L & afew hundred others >:D

Well there was a loud whistle which signalled that we was moving. 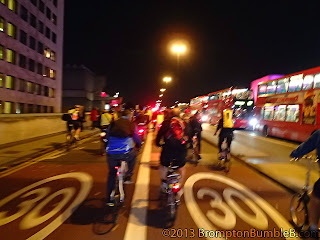 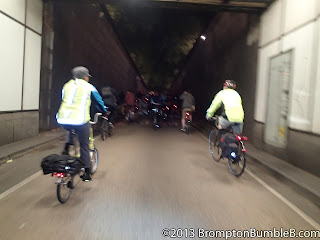 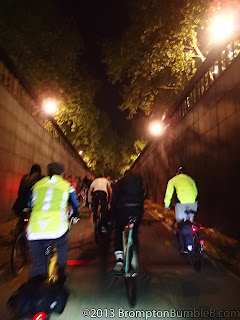 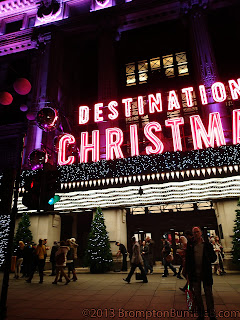 Another rider I've seen on a few rides in London came up to me and mentioned it had some crazy socks on. MY SOCKS. I had to resist cutting off his legs due to copyright infringement :) 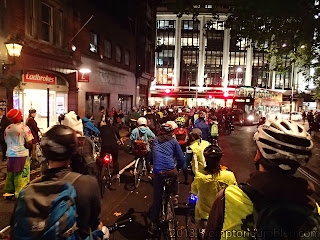 We was heading somewhere I have no idea where when I spotted a HUGE Penis on a skateboard. Yeah I kid you not, I nearly fell over but then again this is London I shouldn't have been surprised. Had to get a few photos of him. 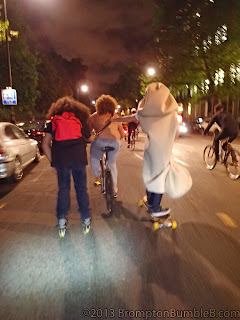 Our little gang finally managed to get together again and we was figuring out what to do next as the ride was kinda fuzzing out a little it seemed. 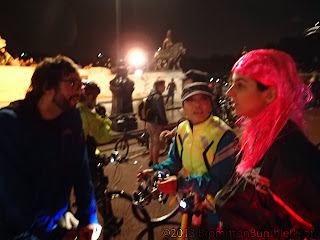 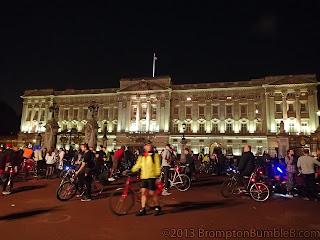 Now dear readers don't get upset now at the following 2 photos. Susana L wanted to have a little go on BumbleB. I think she secretly fancies him, but then again who can blame her eh? he is abit of a babe magnet ;)

Our little gang decided to head back down tot he South Bank near the start and get some Pizza & Beers. Damn fine plan. 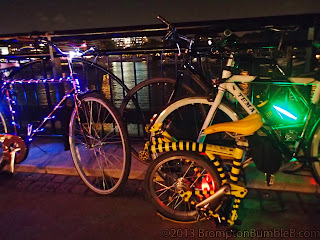 Well after finishing of 6 pizzas and a damn good Beer (Cider for me) it was starting to get a little cold probalby cause we wasn't cycling and getting abit of a breeze from the Thames me and BumbleB decided to head home. 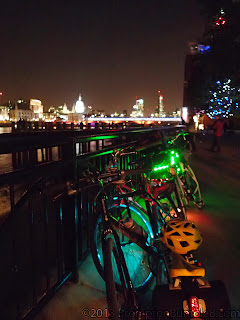 We cheated but I wanted to get home quickly so we could get ready for LBC Ride: Brighton-Rottingdean Undercliff ride.
Garmin Edge 800 Data of Critical Mass: October Edition
Posted by Brompton Bumble B at 07:10 No comments: