As some of you may have know I'm a bit of a fan when it comes to anything Bumble Bee related in anyway. This also includes characters in movies. So when Transformers film BUMBLEBEE came out I went and watched it. It was okish but I wasn't expecting anything awesome. What I really liked the was character BUMBLEBEE himself and that he was a crazy but lovable transformer.

So when someone sent me a link to this Bluetooth Speaker I had to get it. It came in 2 versions, clean  and battle scared. I went for the battle scared as I always like BUMBLEBEE looking abit rough. This was a cheap import so I wasn't expecting great.

First switch on and I was abit surprised as his eye glowed and the sound effect of a transformer transforming as hear.

Yeah I had to giggle at that. 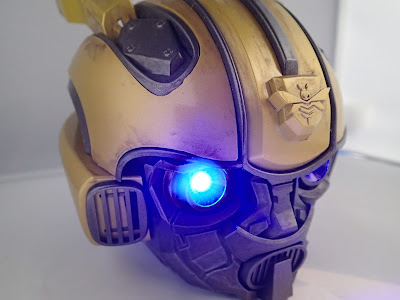 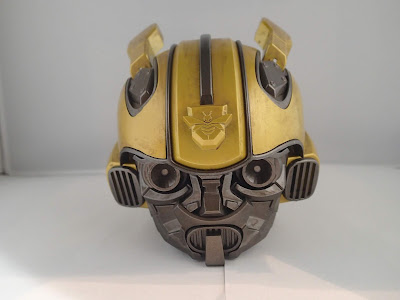 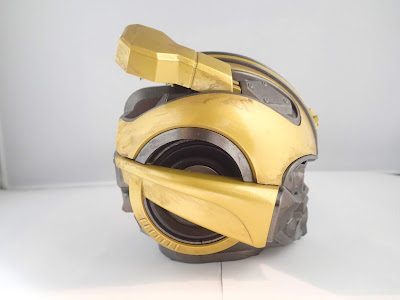 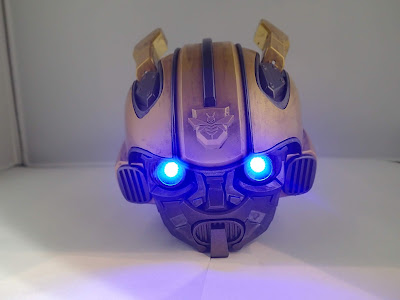 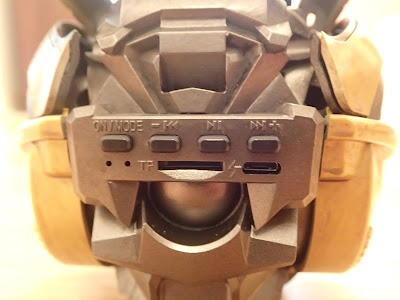 over all not to bad a unit tbh. Good for the giggle factor and well I got a Transformer BumbleBee. What more could i ask for :D

It's got a FM Radio and can take a micro SD card with music on.

This weekend I had some good time off work and there was a nice social ride with my London Brompton Club buddies so  me and the legend decided to join them for a much needed ride.

On this particular ride, organised by Jenny "Mile Monster" H & David "The Guide" P we would be heading from our classic meeting point The London Eye.

My social rides haven't been as many as I would have hoped since the year began but I'm certainly trying to get into more of them and maybe a few of the bigger and longer rides in future as my fitness improves. For me atleast its a little harder to get my fitness level up during these dark and cold winter days but if you want something you got to work for it.

The weather was typically forecast to me COLD but if I remember rightly the last time we had a ride at this time of year it wasn't as COLD as that. Still I layered up with thermals and proper winter cycling gear and headed to The Eye.

Upon arriving at my stop I kinda got a little excited but also alittle scared, this is kinda normal for me if I haven't been on a ride for awhile but as soon as I got onto The Legend  his humming settle me right down. I was pretty much dead on time so I saw a whole group of Bromptons garther together close to the London Eye. There really must be a word for a gathering of Bromptons like that. If anyone has any ideas please comment below. 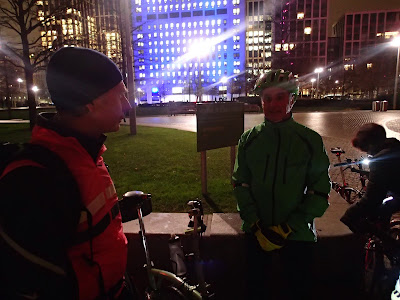 It was good to see old and new faces as always. it never surprises me how people from different backgrounds, nationalities and ages come together cause of this crazy little fold up bike.

Good to see my cycling partner in crime Mr.Orange looking very orange as always. So many new faces to and Jenny H even brought someone that had come from the far east to join us as they where in town and JUST got a brand new Brompton and this was its rider's first ride on it. Good way to break it in.

As always we made our way along the Thames River heading eastwards towards Canary Wharf and passing sights that I have been passed a number of times. London never gets old with the views of the city at this times of day, night or year. 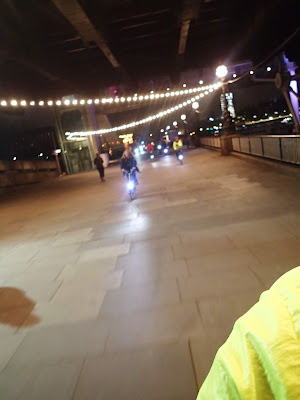 Always love London at night when cycling near the rive, once you get past the tourist points it can be pretty quiet and the lights of the city really bring it alive. 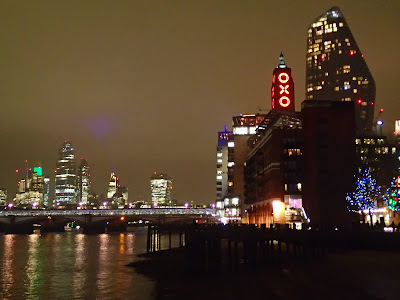 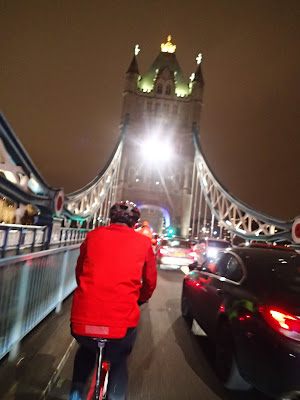 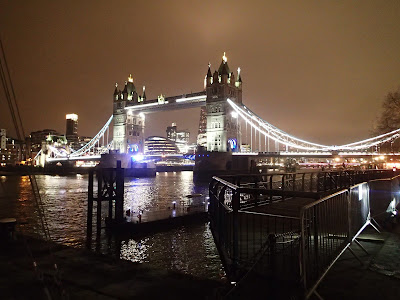 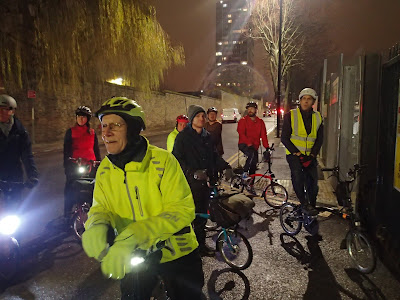 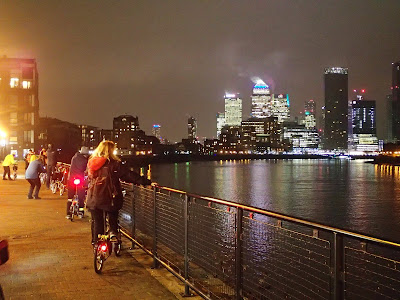 As always we stopped for which is now a MUST do thing on a London Brompton Club  ride and thats a group photo for the facebook group header. 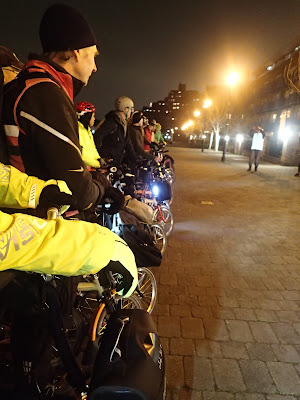 Arriving at Canary Wharf I could tell this was a pretty major event and was in full swing with people everywhere enjoying the event. 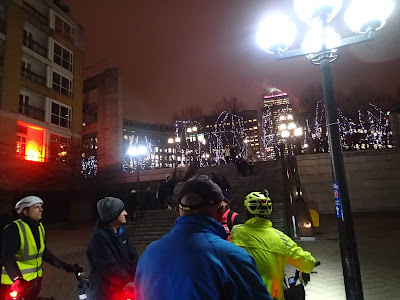 I managed to get a paper guide of the event as the Jenny H and David P both planned out which installations we would try to see given our group and the crowds around us. It would be tough as this was the last weekend it would be here so everyone was coming to have a look before it closed. 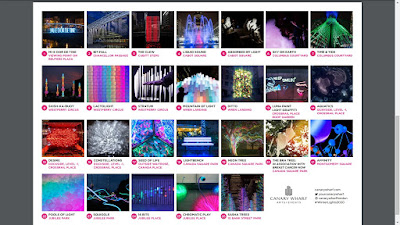 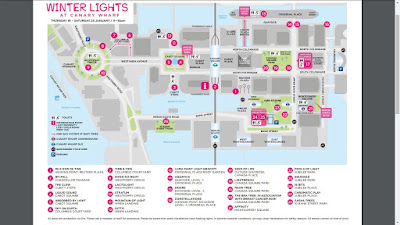 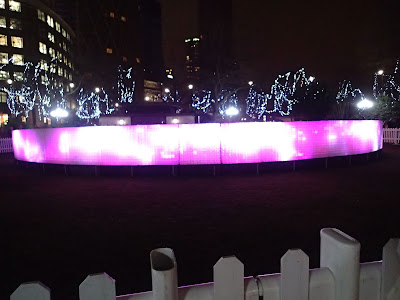 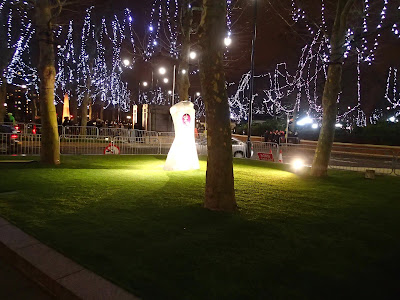 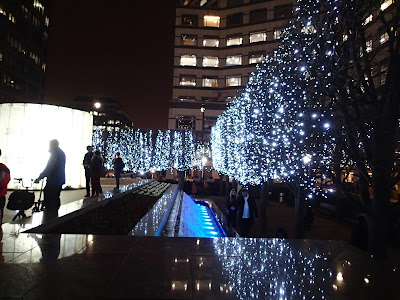 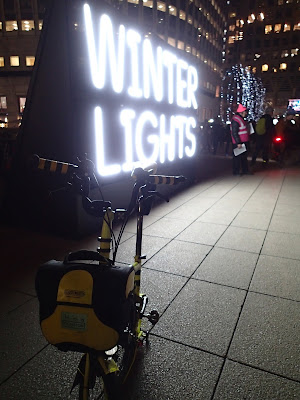 Well we managed to see alot but with us not actually cycling alot everyone was starting to feel the cold as it seemed the temperature dropped since we arrived at the event. Having gathered everyone together we motored back towards our meeting point of The London Eye. 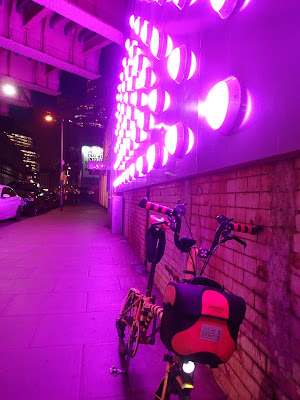 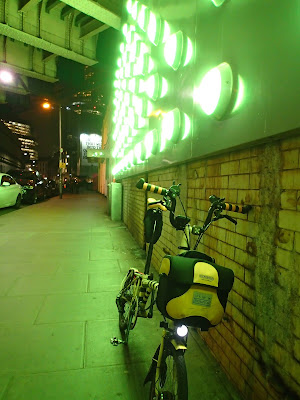 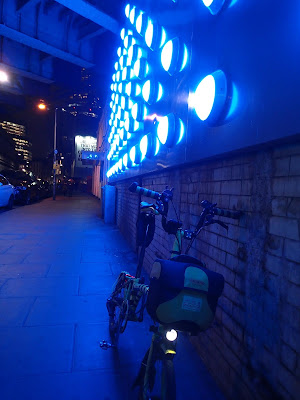 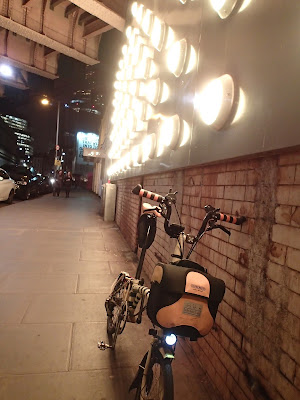 We arrived at the London Eye pretty much dead on the time David H said we would finish and everyone started to say their goodbyes and make their way home.


Once again I'd like to thank the ride leaders, Jenny "Mile Monster" H & David "The Guide" P for organising, leading and keeping everyone safe. For everyone that attended it wouldn't be an awesome LBC Ride as always.

till the next ride, bee safe.....
Posted by Brompton Bumble B at 07:02 No comments: Links to this post

Ever since I went to the Apple Store a couple months ago to get my screen replaced after I dropped my iPhone while trying to get a selfie while cycling. Yeah I know what a dumb ass but I was cycling in a park so not like i was riding on the streets. Anyways when I went to the Apple Store I saw they had upright wireless chargers. I had bought a flat wireless charger but was sometimes tricky to get the phone in the right position to get it to charge consistently.

I had always on my mind to find something similar but never found it til today. I went there looking for the normal pre Christmas shop, low and behold there was the Mounted Leather Charger - Business Edition - Black from Touchdown Charging.

As you can see it fits my iPhone easily & still very usable when on your desk. Can still be charging when phone is in landscape mode and still charges though my case. Word of warning though don't have any magnetic cards between the charger and the phone as it could corrupt the data on those cards.+

till the next ride, bee safe.....
Posted by Brompton Bumble B at 09:00 No comments: Links to this post