The curse has returned...

So over the last couple of months I have noticed a "pulsating" feeling coming from Bumble B's rear wheel. I knew this was from last time my rear rim had worn out and was basically breaking though. But this rear wheel is just over a year old and shouldn't be wearing out so quickly, something was afoot....

I took it to my main man at Mamachari to check out. He trued the wheel for me but found something odd which he couldn't explain. Basically the brake surface was pushing out in odd places on different sides which he couldn't explain and his never seen anything like it. I had another rear wheel on order already so was just waiting and would swap it out. Told him I would have a closer look at the wheel to see if I could spot anything usual about it and report back. I mentioned that the last Velocity AeroHeat rim had a huge crack down the middle which you wouldn't see if the yellow rim tape was in place and then the light bulb idea came to us at the same time. Maybe the AeroHeat rim at split again and was wondering why.

Our theory is that under the extreme pressure of 100psi the Marathon + tires needed as well as my weight may have pushed it to its limit and over time it developed cracks which just got worse over time. Even though there is no mention of max tire pressure for these rims.

I took a very close too at the troubled rear wheel and our theory was right. The AeroHeat Rim had split again if you looked very closely. You can just about make out the crack developing. Not as bad as the first Velocity AeroHeat rim but I caught it much earlier than before.

I also found where the rim is joined it had split but I have a feeling that was from me taking the Marathon + tire off as its pretty new and tough to remove from the wheel. No way me and Bumble B's surgeon would have missed that split for damn sure. 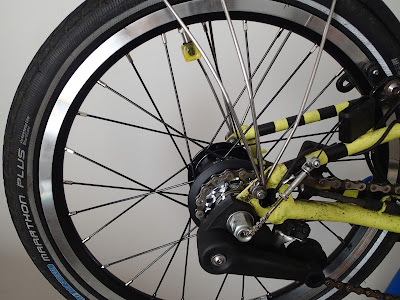 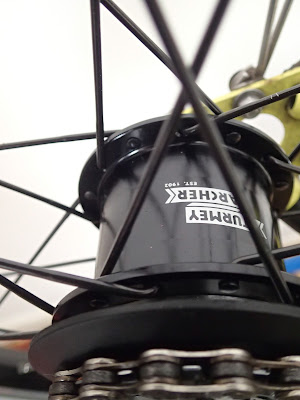 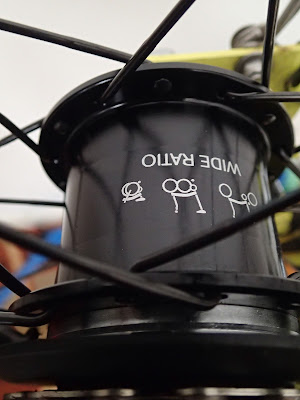 So Bumble B is back up to full strength again. WOOP :D

Its been awhile since I've ridden a decent distance so me and Bumble B headed to the Thames Bridges ride for the Stroke Association. We have done this particular ride a few times over the years and combines riding around London and rising money for a good cause.

Me and Bumble B arrived a little later than I had planned but its a pretty far distance from "The HiVE" to the start of the Thames Bridges start at Kings House Sports Ground near Barnes Bridge Station. Took me about 2hrs by train. I finally arrived at the start and got all registered. As always Bumble B causes abit of a stir when he arrives on the scene.

I was pretty much ready to go when a fellow Brompton rider Sylvia came up to me asking if I could  help with her Brompton. Being the gentlmen that I am, I could never turn down a lady in distress.

Turns out some how the straps for the rear rack for wrapped around the rear wheel sprockets and locked up. Tried to undo it but it was so tangled up I had to take the whole rear wheel off. Just when I did that the rear sprocket of her 3 speed pretty much fell off in my hand. Got Sylvia all sorted ready for her ride. She was doing the 8 mile ride so me and Bumble B waved her off on the start line.

Me and Bumble B was pretty much ready to go but had to wait a little while for the safety briefing from the marshals and then we was off.

I didn't take many photos as I was mostly focused on making sure I was going the right way and cause there was a lot of other cyclists about I had to keep my wits about me so not to run into anyone.

Unlike other years of this ride, there was only 1 stop at around the 22 miles mark. Good supply of water, peanuts and other goodies for the hungry cyclist that has a few miles to go.


While we was there I met this gentleman who came up to me and told me that he had seen us on this ride before and the legend and I inspired him to do this ride on his 70s Bickerton no less. Kudos my man, KUDOS.

This kind of thing really makes the legend happy, inspiring people to do things they couldn't think they could do.


Not long after we left the feeding station I started to "bonk" abit. I knew I probably would is why i made sure I ate a few bananas and took a few cereal bars with me. I didn't eat properly before I left the HiVE as I was a little excited to get going I suppose.

I just put my head down & got on with it while eating and drinking as much as I could counting down the miles to the finish. I was on my own for a good few miles so didn't really have anything to distract me from the "bonk". Finally caught up with a few others on the ride which made me feel much better and the "bonk" feeling started to fade away & I felt stronger.

Saw the tents in the distance and knew we had made it so really pushed in on the final straight to the finish line to the huge cheers of everyone.

The legend had done it, which big smile and congrats from everyone for a good ride. All I wanted was FOOD and lots of it. I finally found the food stalls and ordered up a HUGE cheese burger with pulled pork. I didn't even give myself a chance to take a photo of it as I just wanted sink my teeth into the meat and savour the taste explosion going on in my mouth. 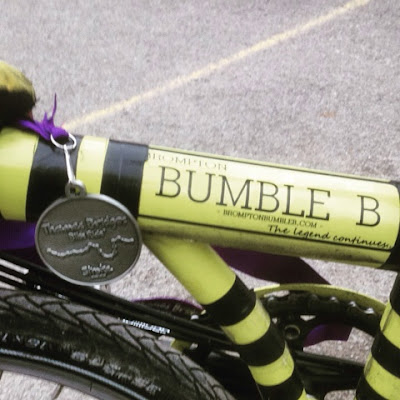 Finally had to make my back to the HiVE. Just as I was exiting my station I unfolded Bumble B and heard a *ping* I thought what the hell was that? I started to roll Bumble B and noticed something was jammed up in the rear wheel, had a closer look and found this. 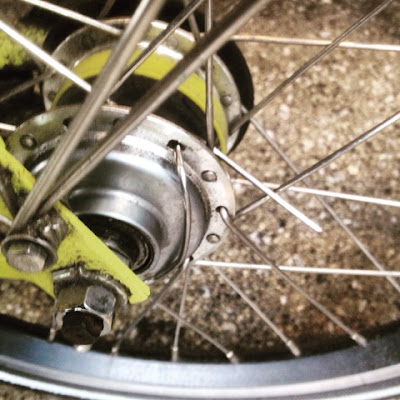 I know my unfolding skills are awesome but I didn't figure they where THAT powerful. Lucky I actually have a brand new rear wheel on order from Brilliant Bikes.

I'd like to thank everyone for the support and cheers as well as the organizers of the Thames Bridges Ride.