This was a ride organized by Bob H.  A good loop ride from Reading Station just over 30miles with a promised Curry to finish.

After the awesome ride yesterday I was looking forward to this one as I knew the weather had been promised to be good throughout this weekend.

Felt there was a little chill in the air so I may have layered up more than I should which I would pay for dearly later on. 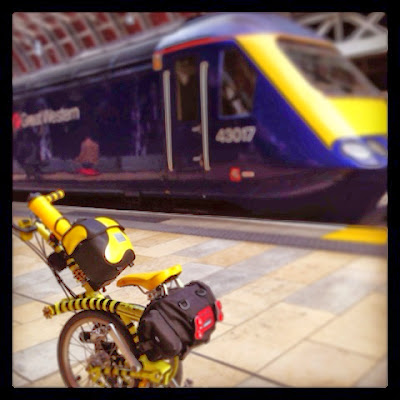 Fully fuelled up with porridge with a mixture of fruit & nuts and a banana I set off to Paddington Station to catch my train to Reading.

Once on the train I settled BBB in a luggage rack & enjoyed the ride.

Having got to Reading Station I met up with Ann M, David P, Bob H, Dina D, Rob H & 5Mile. So 7 of us all together on this little ride.

After Bob H gave us a little outline of the ride we set off on our loop.

I have to say that  felt ok for the first 3-4miles, then things started to go wrong.

I hit the "The Wall" but I like the term "BONKING"

I think I over did it on the LBC Thames Triple Chaser 2014 the day before and didn't recover properly.

Bob H suggested I take off a layer as it was turning into a warm day and that helped & also snacked on my energy bars.

Just about made it to the Terrace Cafe where it was suggested that I get a good energy boost from drinking milk. So I ordered up a Fish finger sandwich & glass of milk. My appetite wasn't all that good and I only ate half of the sandwich. 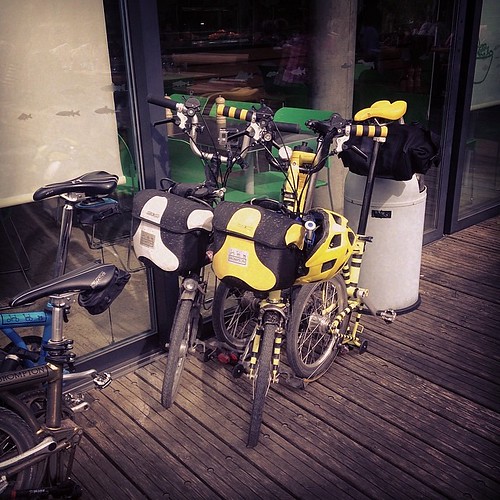 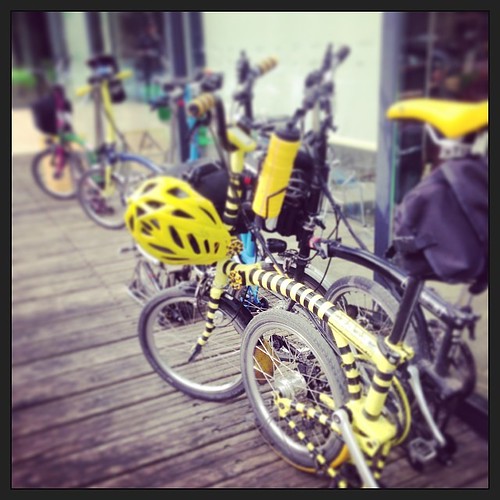 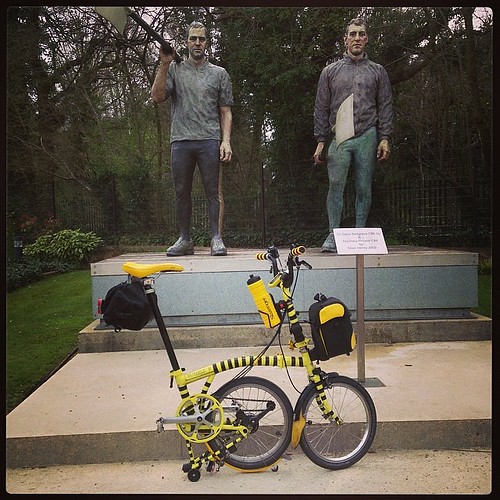 Right after we left the museum there was a pretty steep hill. As soon as I saw it I hopped off and walked up the evil thing.

After a little while of cycling I began to feel a little better. Still felt lagged but kept on going as I knew we was on the homeward leg of the ride.

The promise of a good curry kept me going as I knew the Curry house was right next to the station.

Finally made it back to the Curry House where the owner was happy to have us park up our Bromptons in the back yard for safe keeping while we had  a damn fine curry buffet. Big thanks to the folks at the Curry House and ofcourse Bob H for leading and everyone else for their company.

My Garmin Data
Posted by Brompton Bumble B at 21:00 1 comment:

On, under & above the Thames


Today's LBC ride promised to be a good one.

How wrong was I. It was a awesome club ride.

Mark W had planned an awesome ride under, over and on the Thames. There was to be over 30 Bromptons at Trafalgar Square for todays LBC Club Ride.

Riding to Trafalgar Square the weather looked pretty for a ride in the city. I was feeling pretty good in my Bumble Bee cycling top riding though Central London. 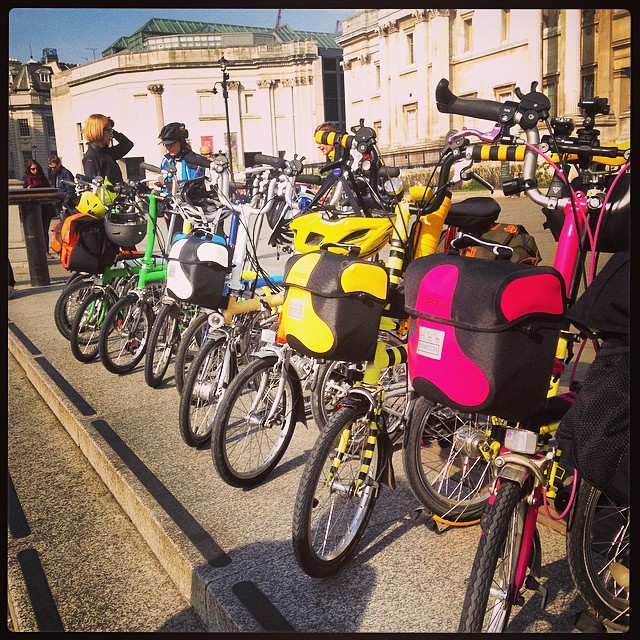 As always having so many Bromptons all lined up in one place draws attention.

I have to say being a part of this group is awesome as you get to meet and greet new riders to the fold as well as see old friends. 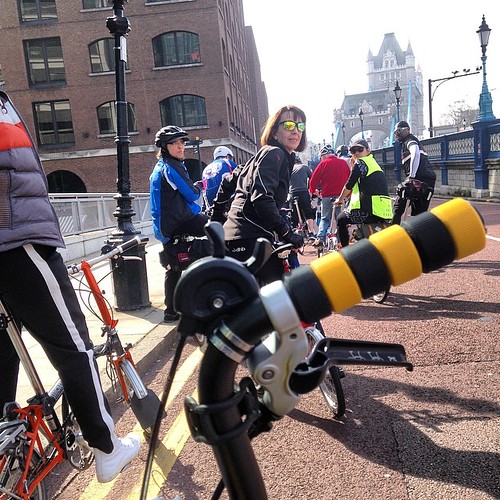 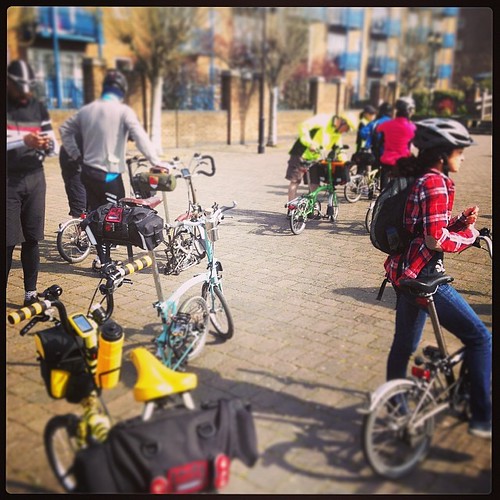 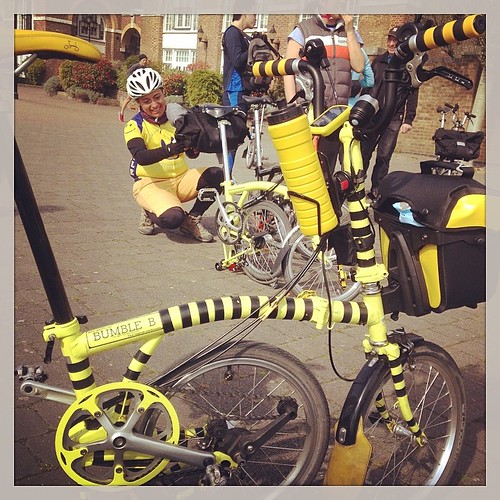 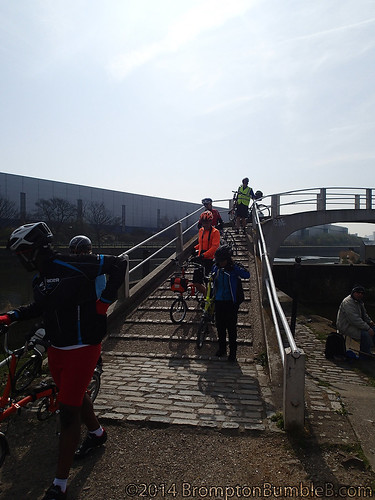 Having made out way to the Greenway and then close to the Olympic site. Just outside the Olympic site there was a new to me cafe "View Tube" and even a place to hire bikes for the day. Definitely will be visiting again to sample the food more.


Cycling & cake, the perfect combination. I had to sample abit of the Guinness cake they had. mmm yummy


After the Olympic Park we headed towards the Woolwich Ferry to go over the Thames.

We headed to the Millennium Dome and  we stopped off for lunch and water. Seeing it was a nice day we just got some sandwiches etc and sat outside. It was a little windy there but I don't think we minded too much. 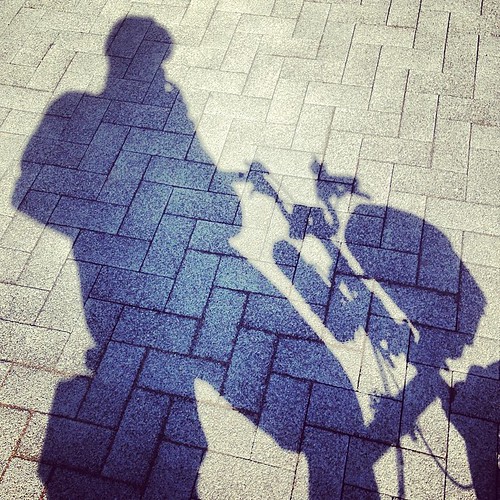 On onwards to The Thames Barrier..... 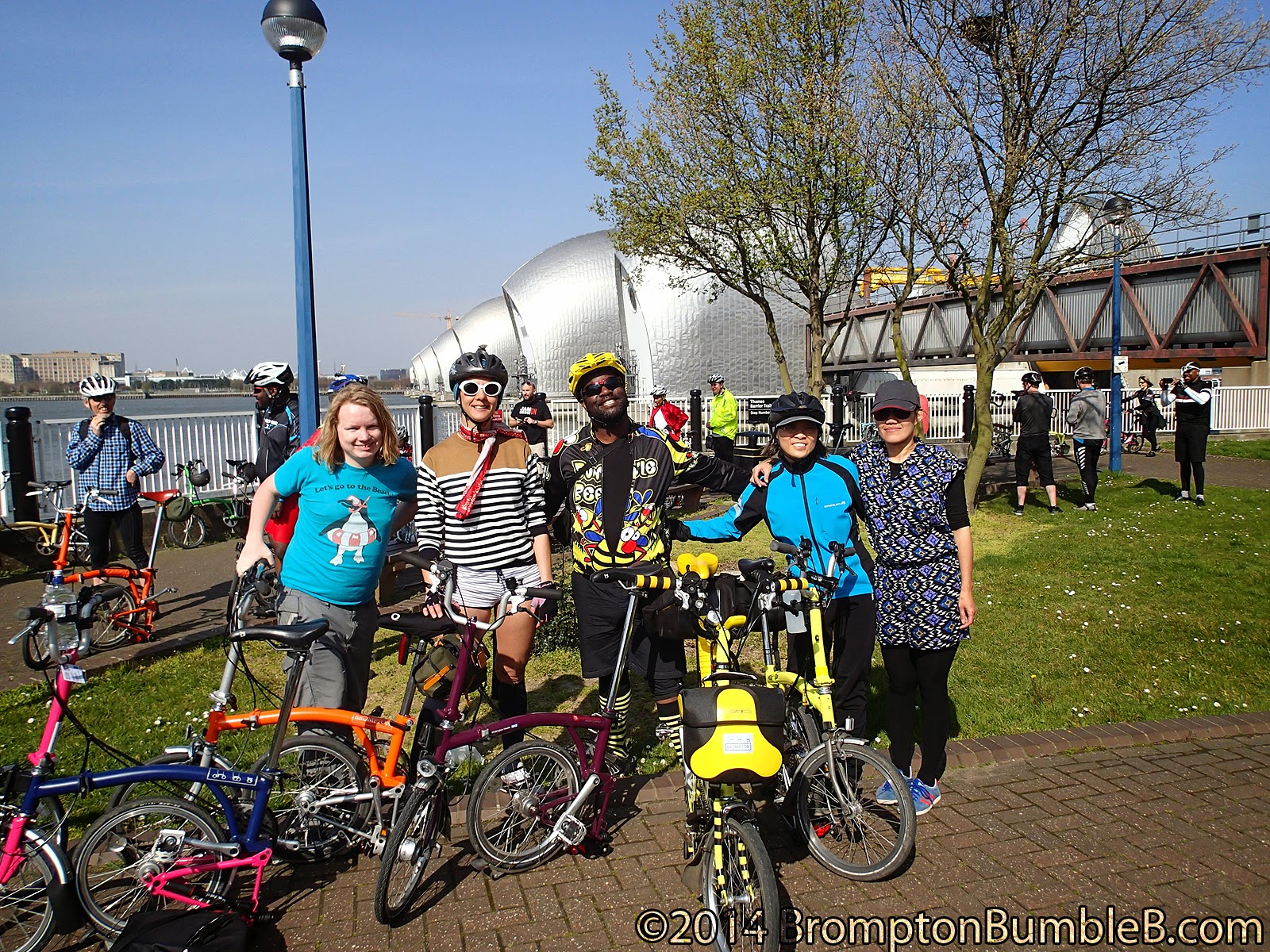 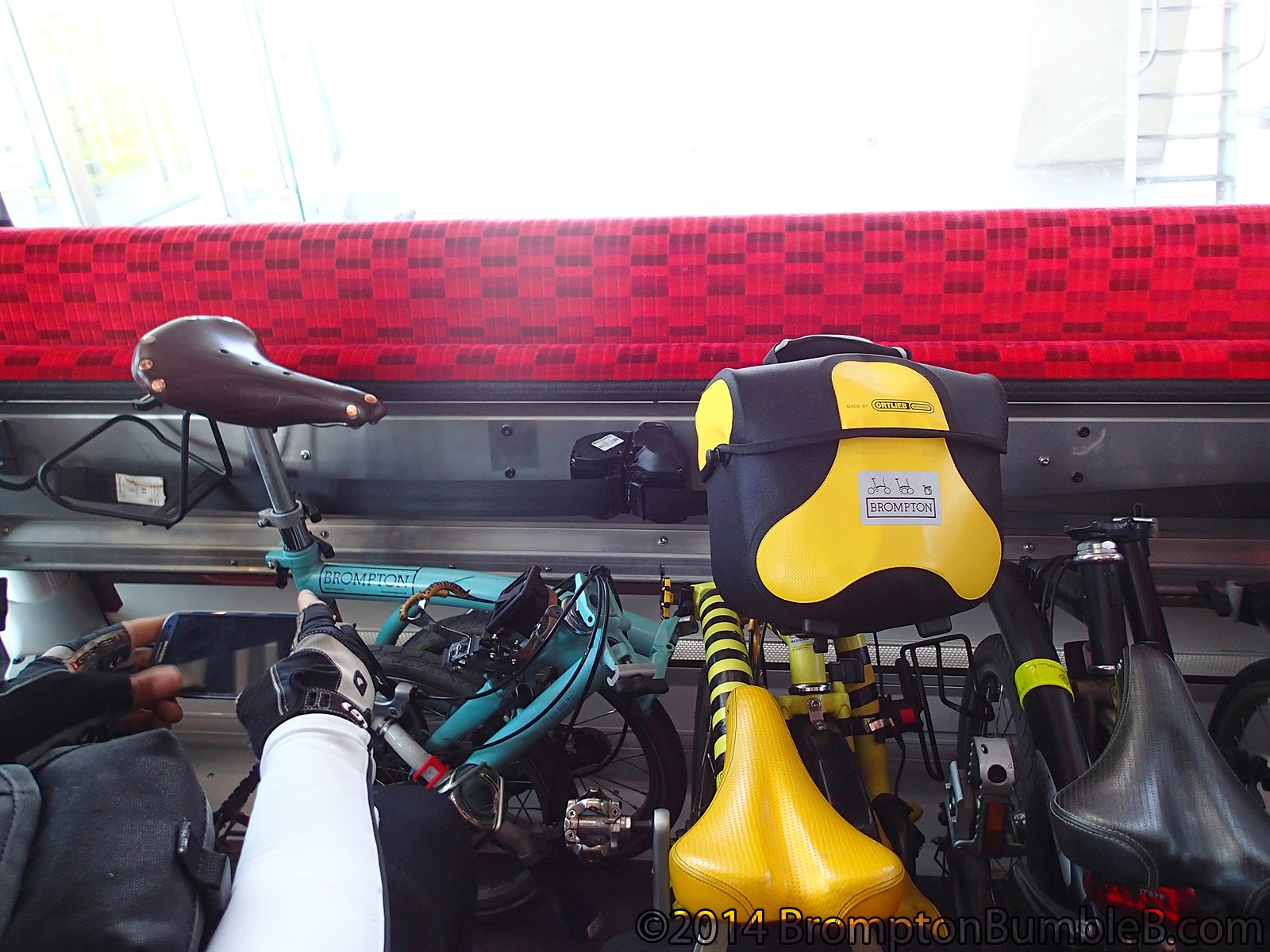 After we got off the Emirates Air Line someone spotted this young fan of the BBB. Quiet rightly after seeing me his parents wanted to get a pic of us together sporting the black and yellow. Slowly but surely the power of black and yellow is taking over, deal with it. 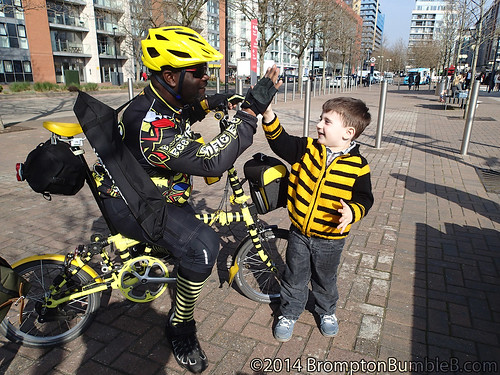 Then to the Greenwich Tunnel to go under the Thames. I always enjoy going though this tunnel on the other side is the Cutty Sark 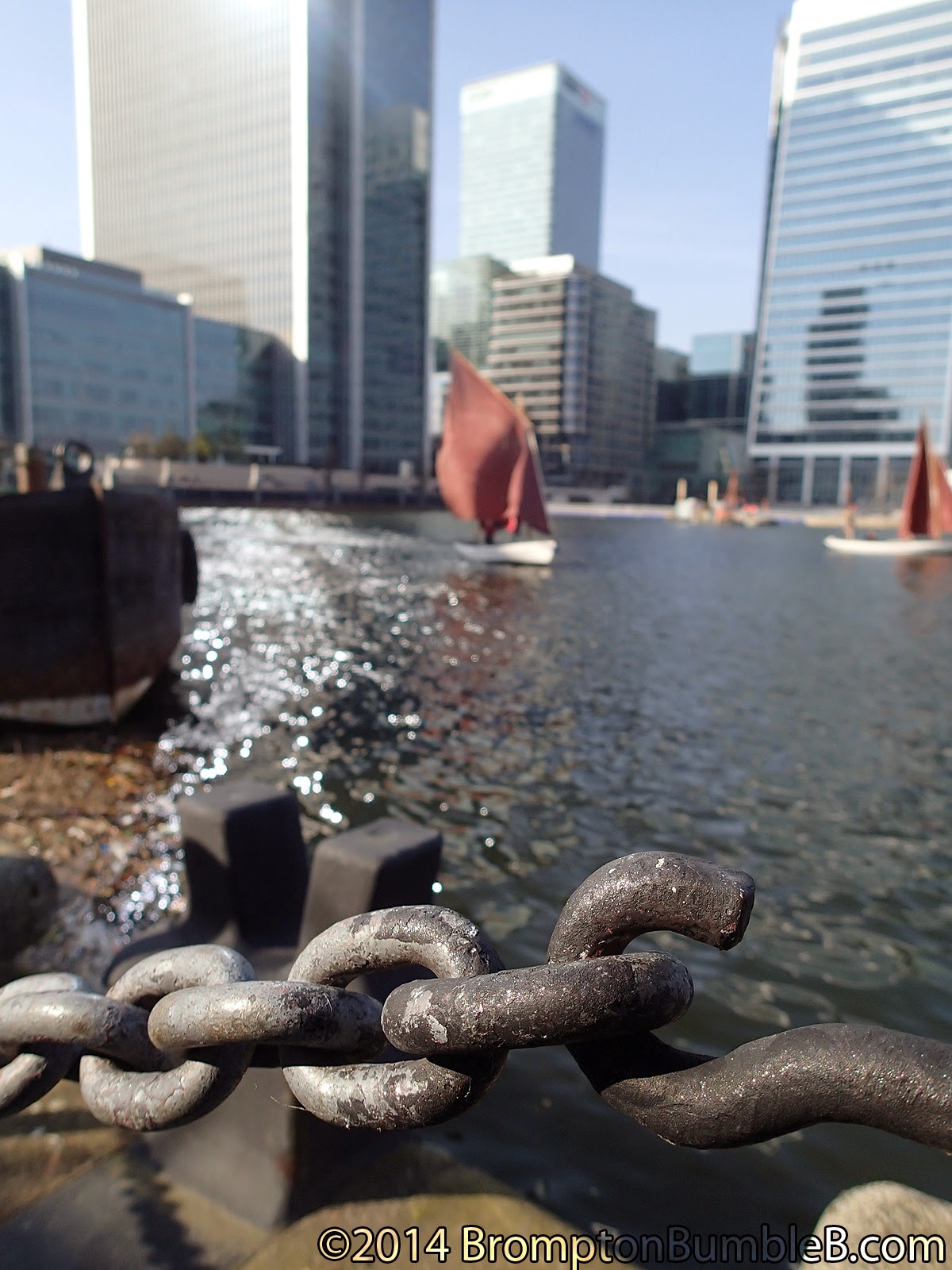 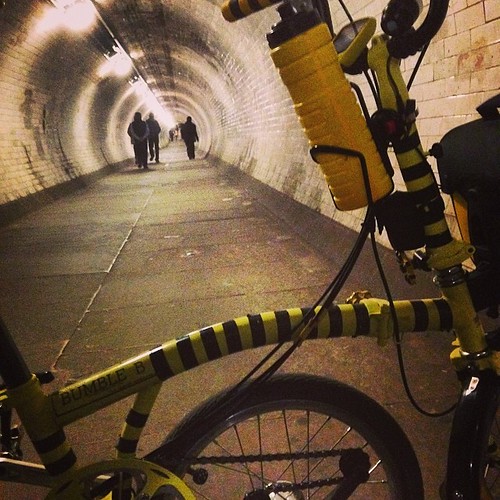 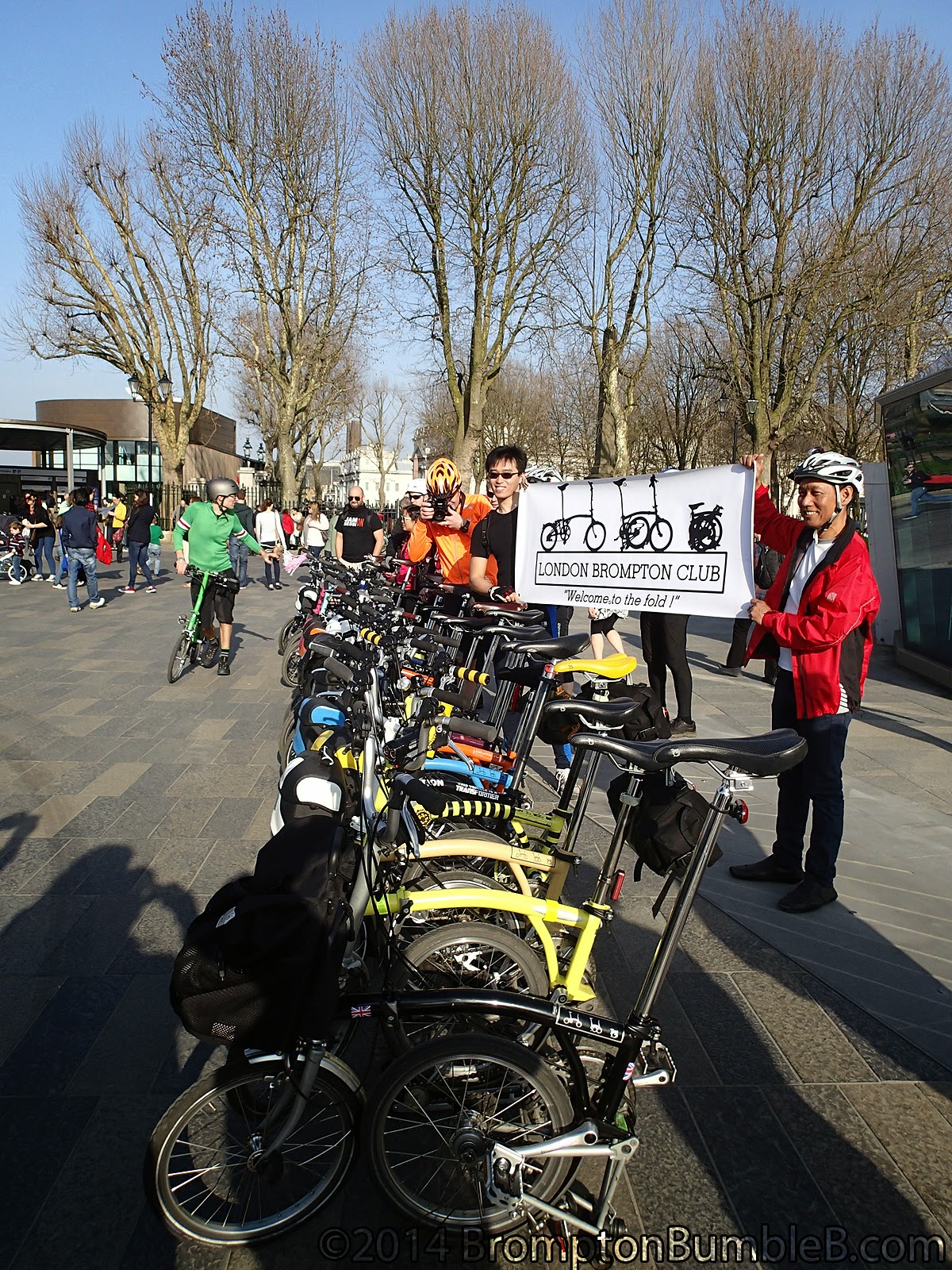 This was the end of the ride for some and I decided to chill out abit and head home. One last group photo shot before afew parted. 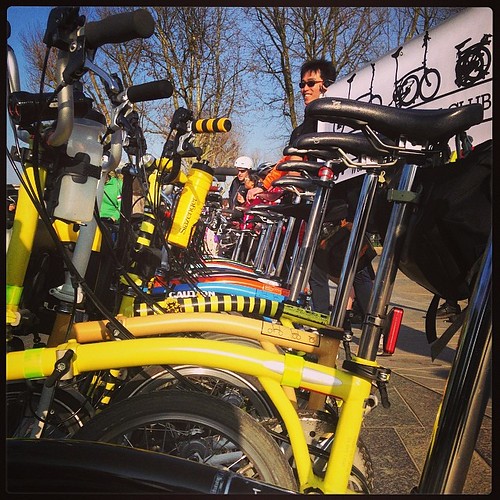 Had a little chill out time near a pub at the Cutty Sark in the sun.

Another good ride with the LBC as always. Me and a few headed off homeward bound.

With the sun beginning to set on awesome day of riding. 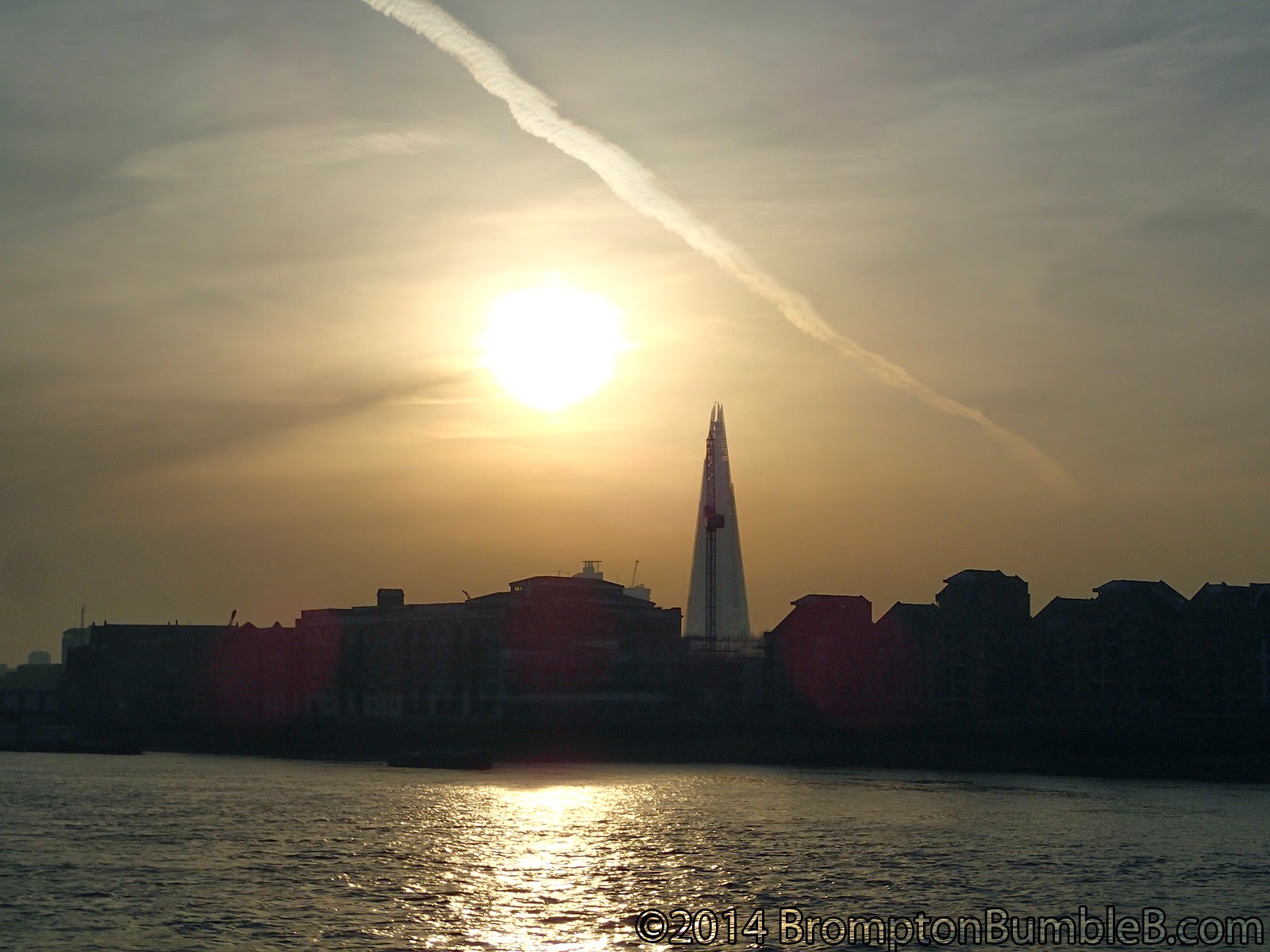 I'd like to thank everyone for attending the ride and Mark L for leading it. Looking forward to the next ride.

Garmin Ride Data
Posted by Brompton Bumble B at 21:00 No comments:

Today I went on a ride with a new group based on MeetUp.com called Cycle Ninjas of London & SE. Quiet a few of my cycling buddies I have met on the different social rides in and around the London area.


Meetup is the world's largest network of local groups. Meetup makes it easy for anyone to organize a local group or find one of the thousands already meeting up face-to-face. More than 9,000 groups get together in local communities each day, each one with the goal of improving themselves or their communities.
Meetup's mission is to revitalize local community and help people around the world self-organize. Meetup believes that people can change their personal world, or the whole world, by organizing themselves into groups that are powerful enough to make a difference.

This ride was a loop from Greenwich to Camden The Second - (Roughly 25 miles). Nothing too hard more of a social type of ride, the kind I enjoy more these days.

Meeting at the Cutty Sark end of the Greenwich Foot Tunnel. I was going to get their by underground train but the underground system was a bit messed up due to maintenance works going on at various points so setting my Garmin Edge 800 to get me to the meeting point made it all easy as always.


Once we all met up we was off on our little adventure around London. We took a route along the Regent Canals from central London to Camden which I am very familiar with. Can never tire of seeing the canals as there is always something happening there. The weather was perfect for cycling. We was passing the back of Islington Police station which where having a abit of a cycling road show type thing. Free security marking of your bike, quick maintenance check & a lorry for you to get the view that lorry drivers have of the world. I would encourage everyone that comes across one of these road-shows to have a seat in the cab of a lorry so you can see the view that lorry drivers have. You'll be surprised.
I spotted that BBB's chain needed a little cleaning so asked if they had a chain cleaning kit thing & clean his chain.
Then we headed off to Camden Lock for food. It was pretty busy as you would expect on a  nice day like today. Lots of tourist and people just enjoying the weather and ofcourse food. After food it was the fast run back to Central London, a few of us wanted to hang out in Hyde Park for ice cream to chill out. Another good ride, and with spring follows summer so even more fine weather and more cycling to be sure.

Ride Data & Maps: Cycle Ninjas of London & SE: Greenwich to Camden Loop
Posted by Brompton Bumble B at 23:48 No comments: