The Legend goes up north again.

Once again the call northwards was answered.

The LBC Northern Chapter was having another Brompton Ride in Sheffield. After having so much fun on the last LBC: Sheffield 2013

Looking at the weather there was a chance of rain but as it turned out it only rained while I drove up with John M who accompanied me on the long drive to Sheffield. Parking at those lovely folks at "Edinburgh Bicycle Cooperative" I met up with a Ann M, David P, Mr. O & the organizer Alan K & his lovely other half & made our way down to Sheffield Train Station where everyone was meeting up. 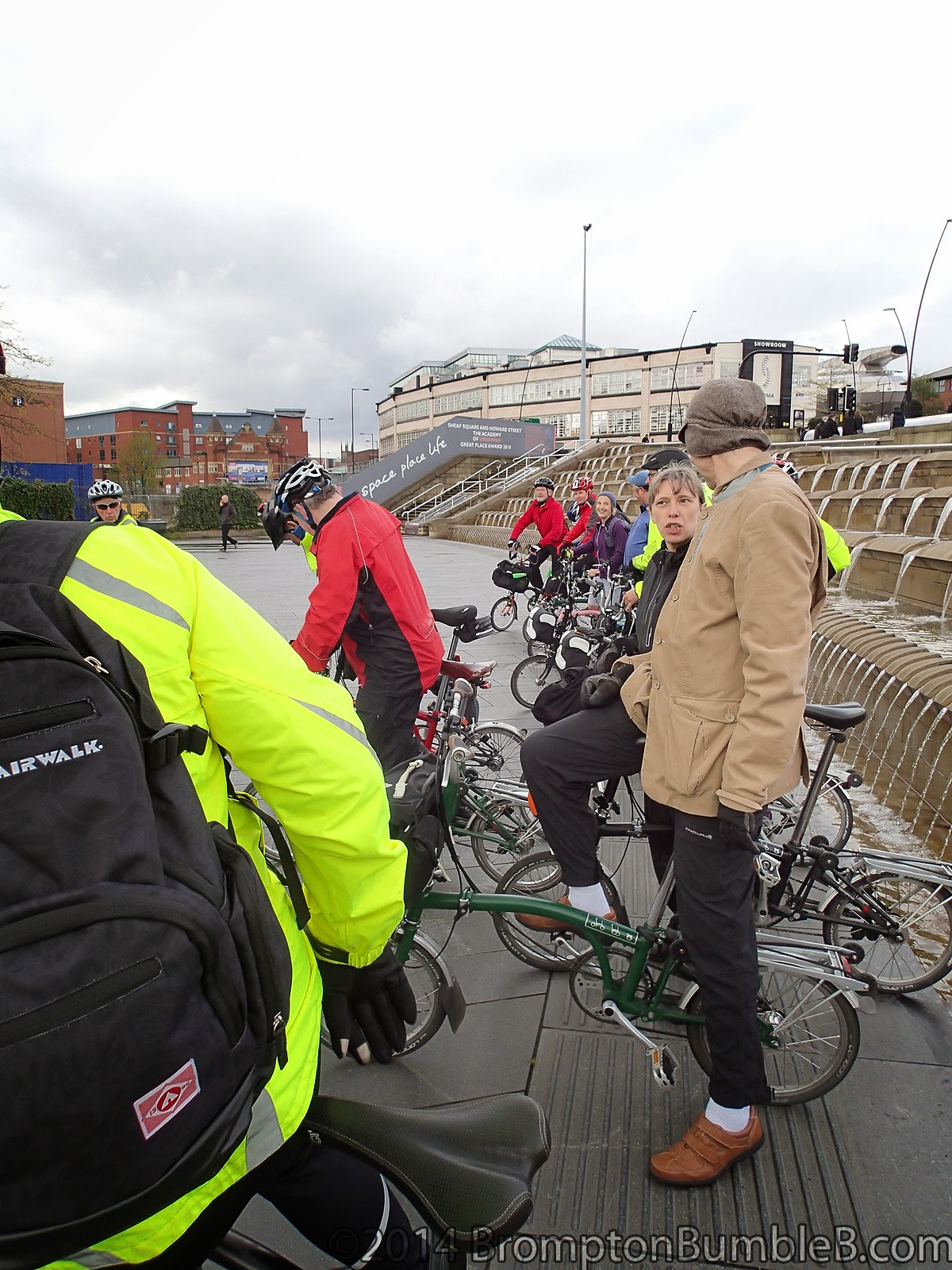 After a brief talk about our little tour of Sheffield everyone ready for the off.... 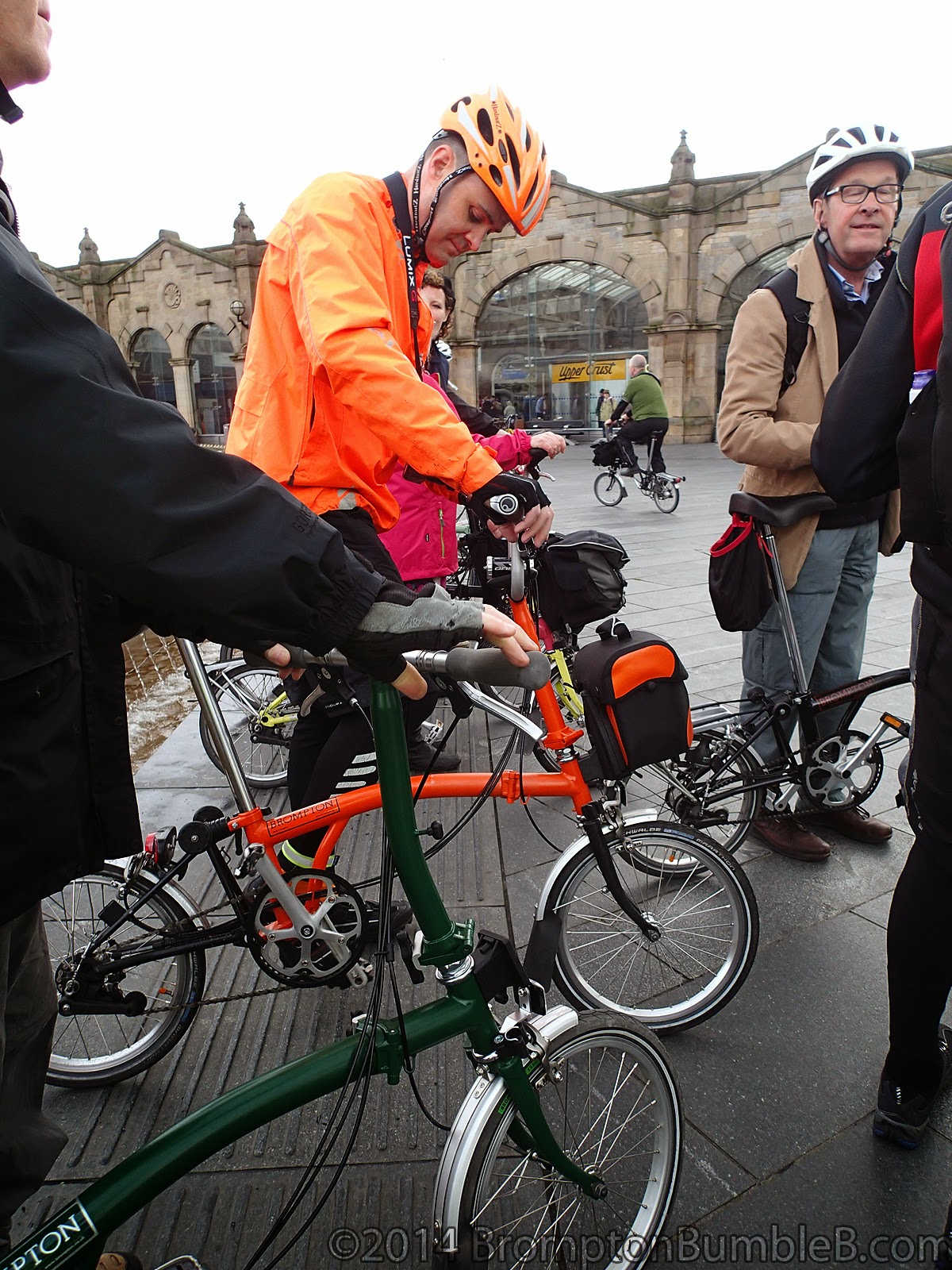 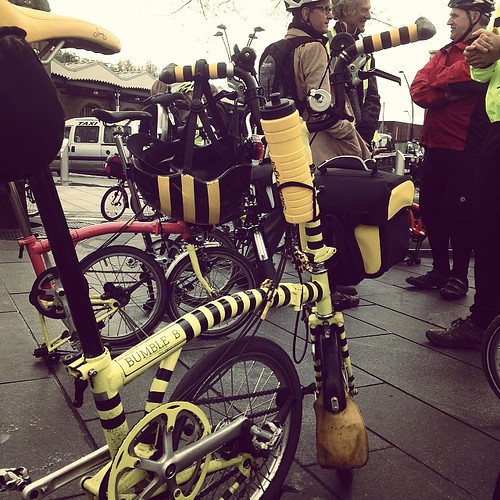 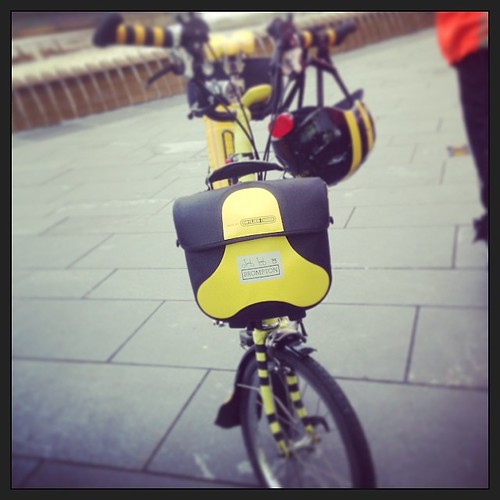 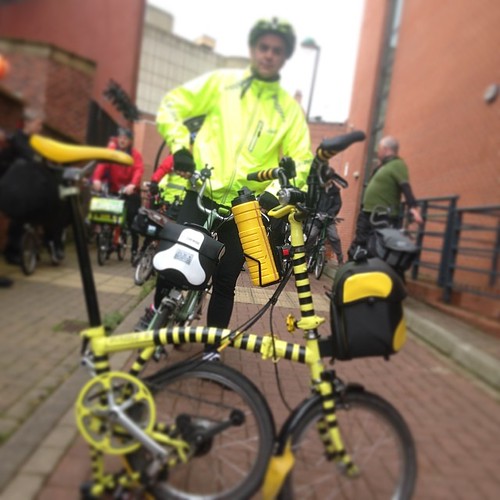 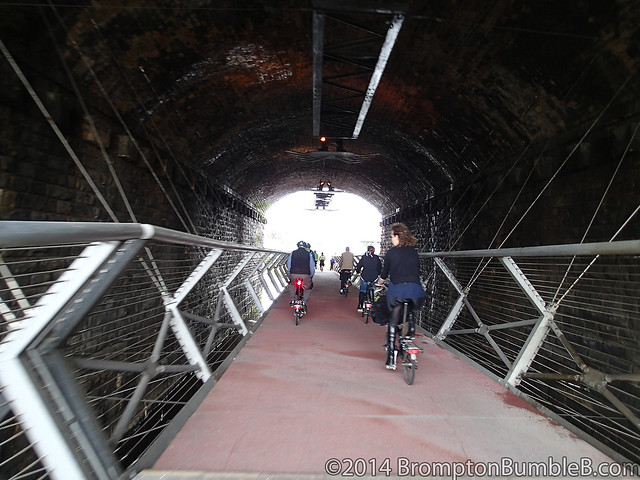 Our guide Mick who knew pretty much everything about Sheffield and its history was great at putting the great history of the town in a good way, thoroughly entertaining. 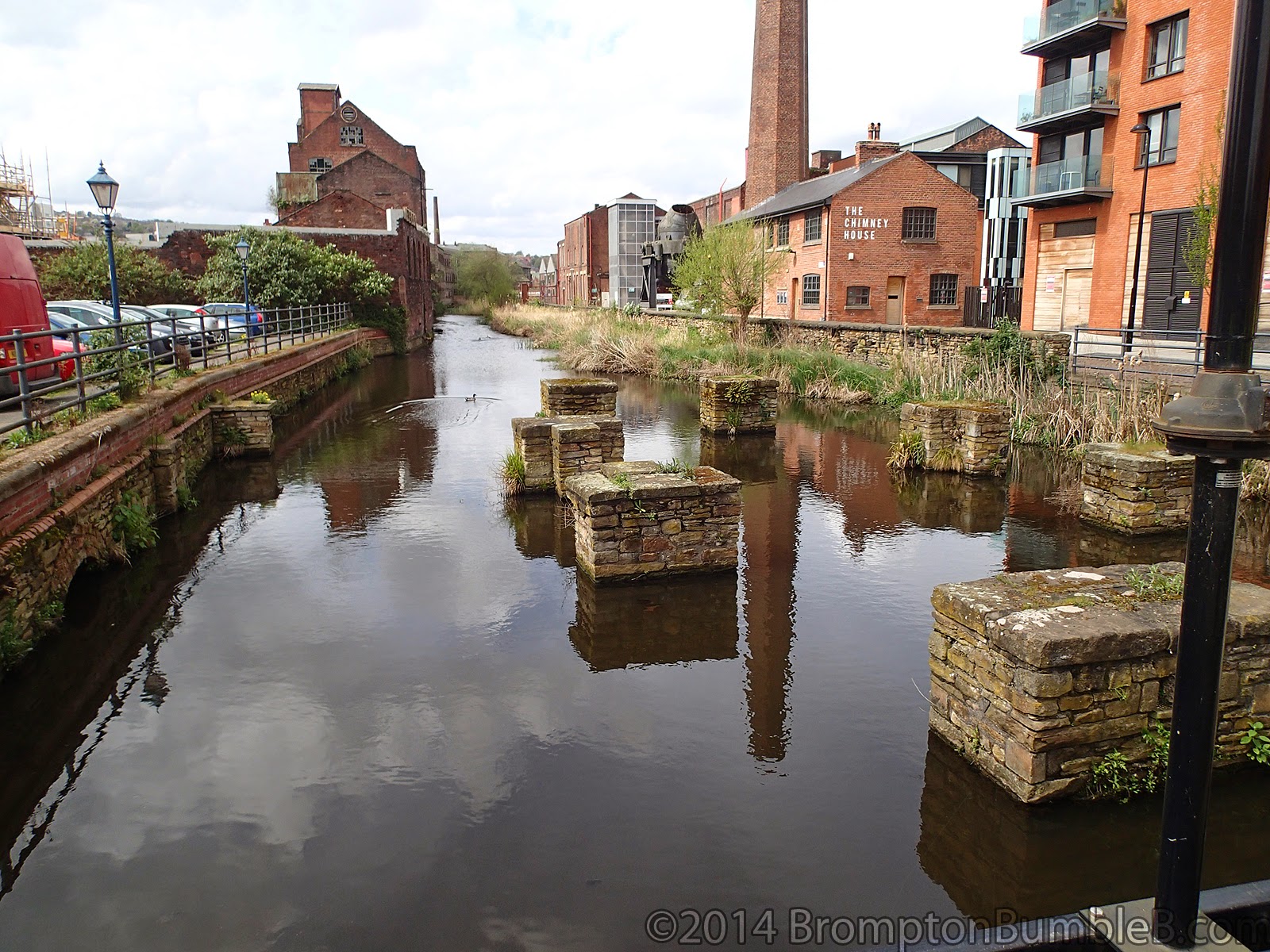 Now finally it was the high point of the ride for me, having lunch at a pub called "The Black Cat" and have myself PROPER Yorkshire Pudding. I was not disappointed.

In the Black Cat Pub we had a little room reserved all for ourselves. The staff where very helpful and I admit even quicker with the yummy food. Big thanks to everyone at The Black Cat for accommodating us so well.


The lunch was sooo good I found it a little harder getting on BBB let alone going up the remaining hills of Sheffield. 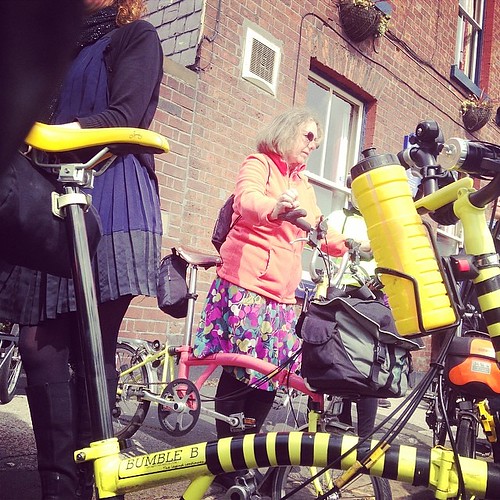 Entering into the Sheffield Botanical Gardens where everything was in bloom and looking perfect. 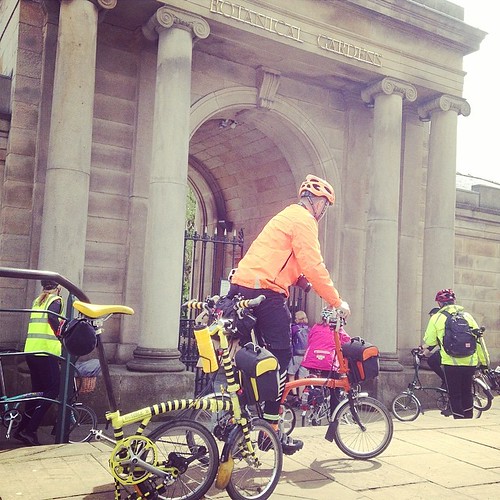 After the Sheffield Botanical Gardens we visited the Shepard Wheel Workshop which had a fully working water wheel and original workshop. 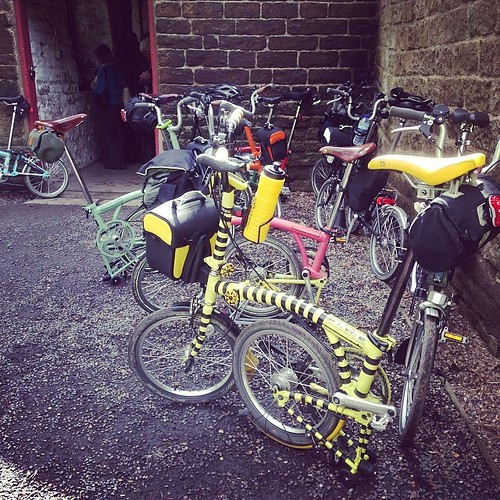 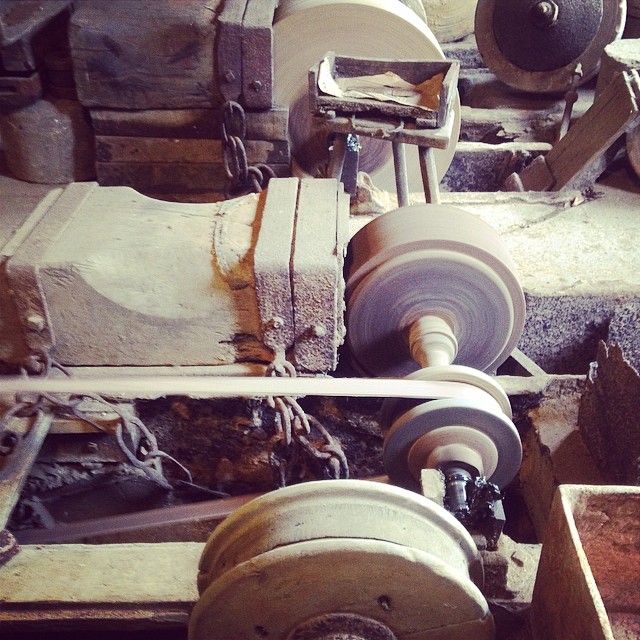 While on this ride we would be riding some of the places this year's Tour De France will be taking place. Ofcourse there will be a few hills involved and I did have a little trouble going up a few of the steeper hills. Alan K allowed me to borrow his Brompton for one of these hills which has reduced gearing so it would be easier to go up hills. I have to say it was alot easier so that will be BumbleB's next major upgrade in the very near future. 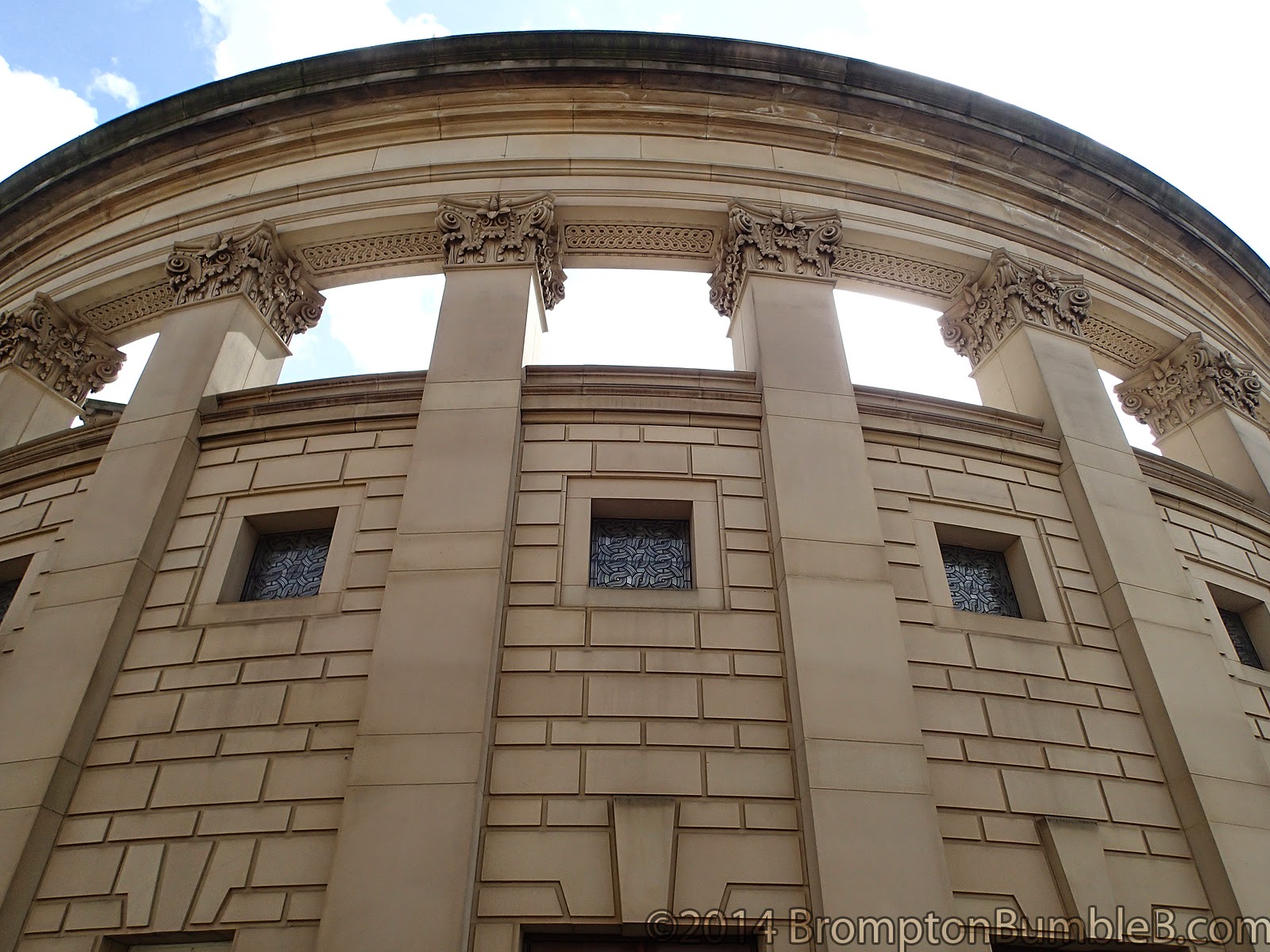 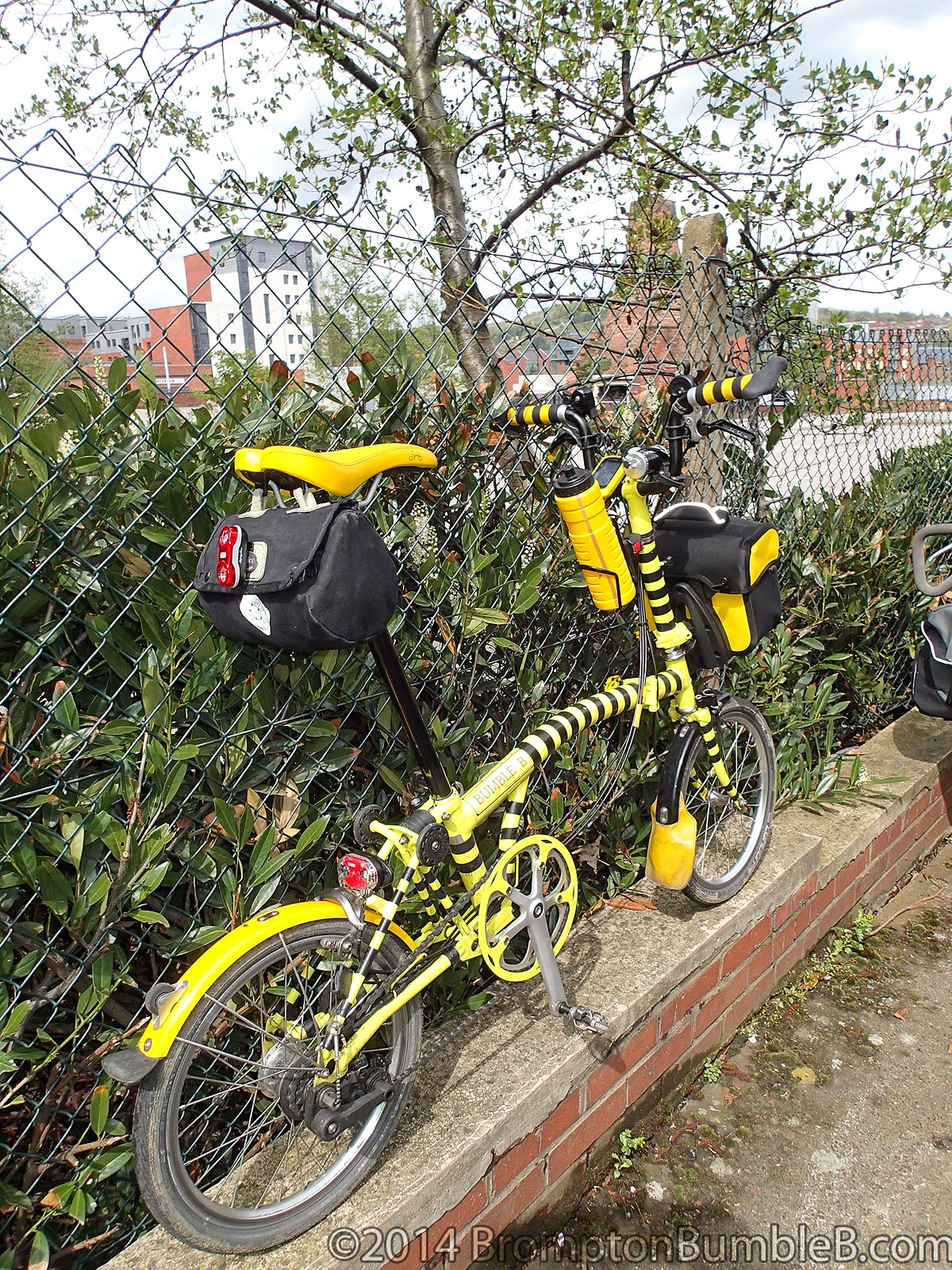 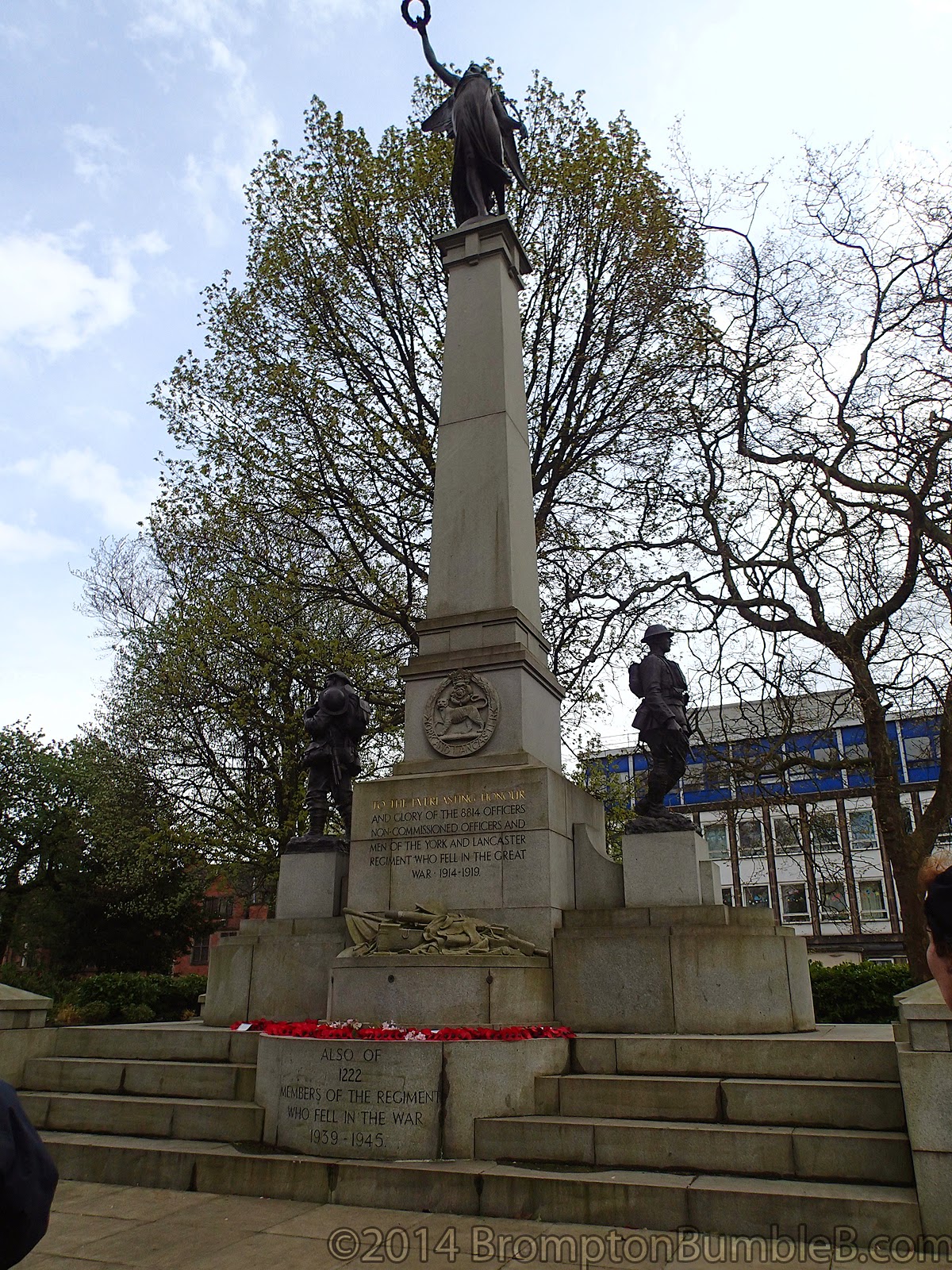 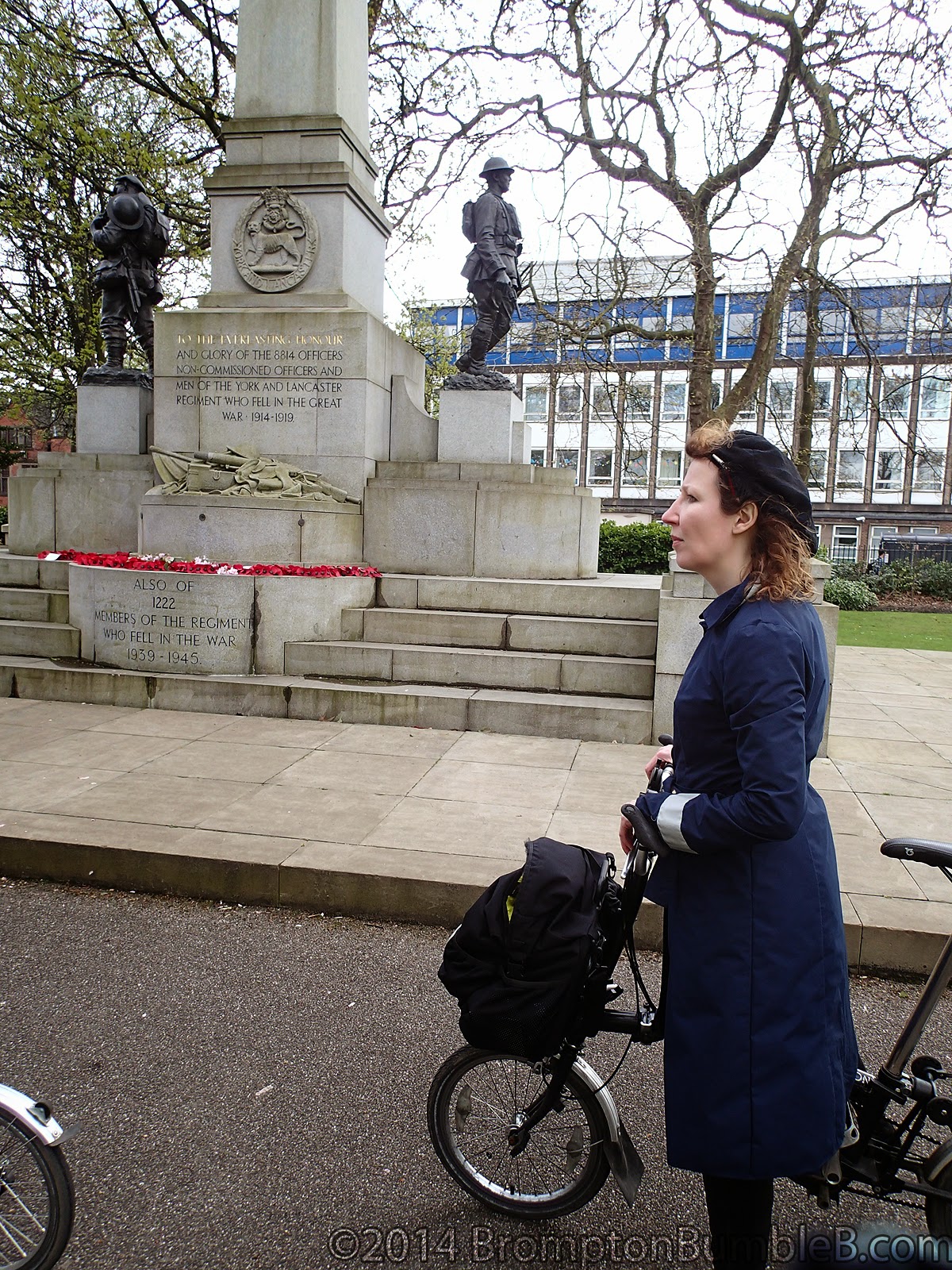 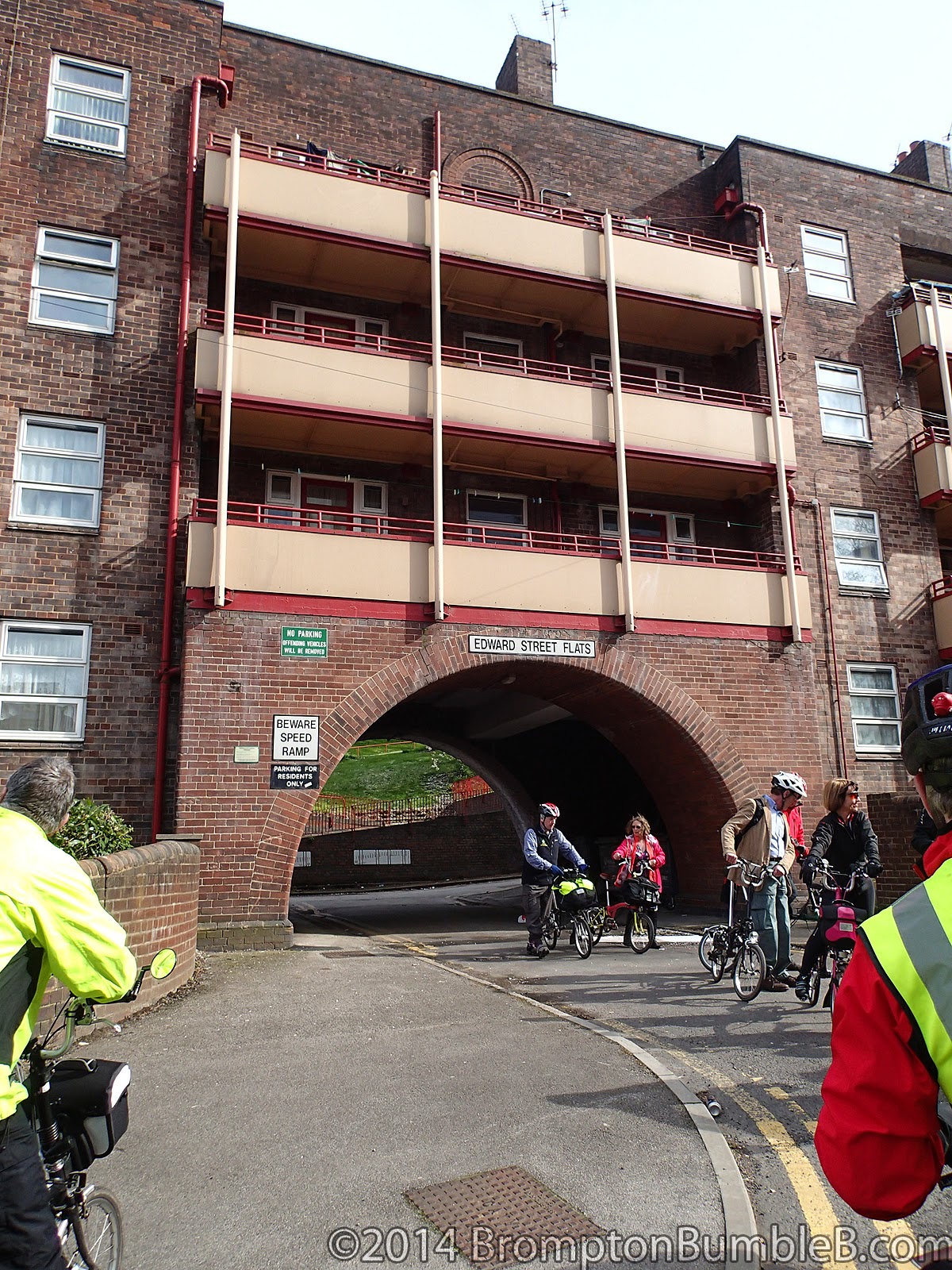 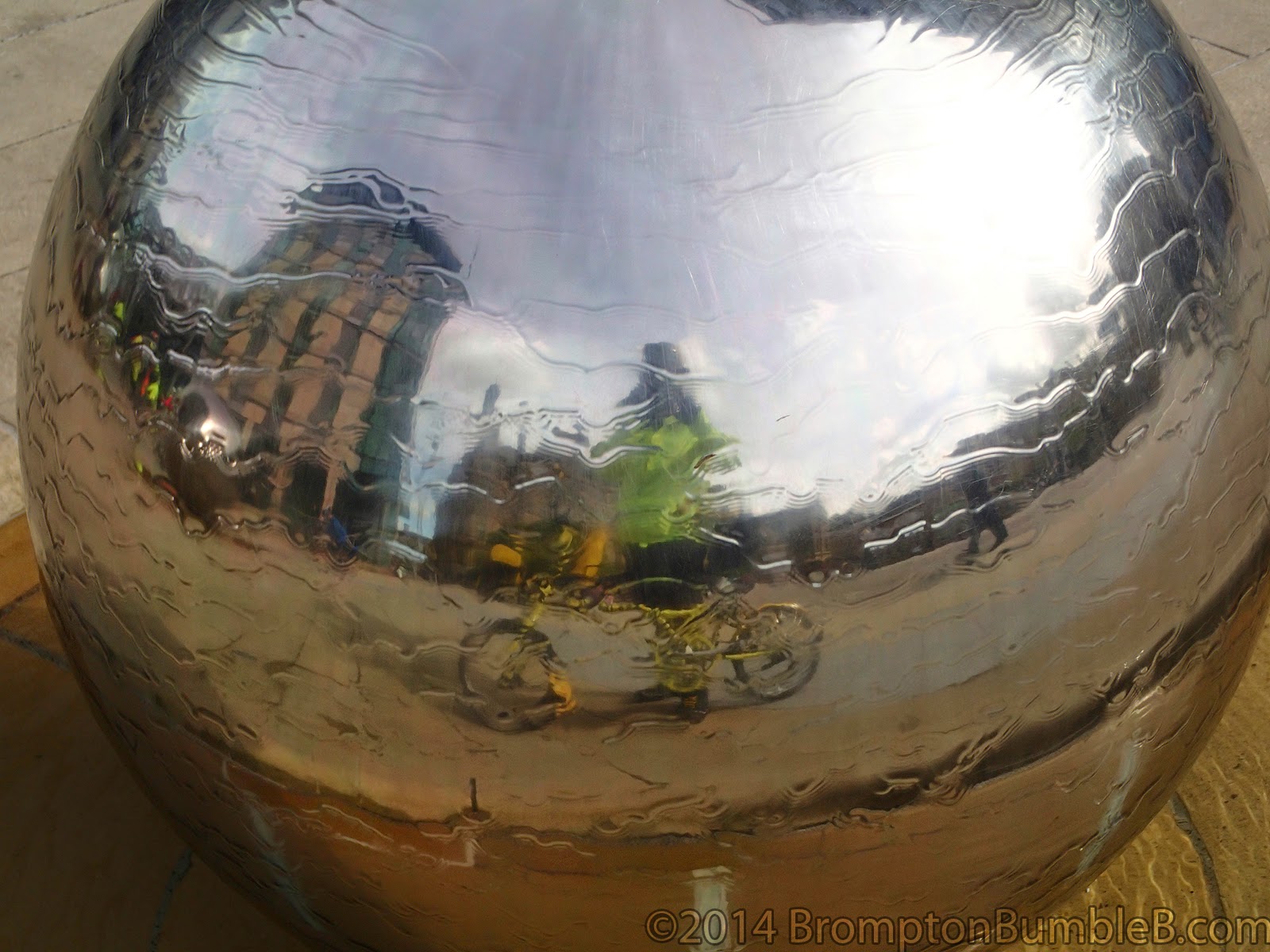 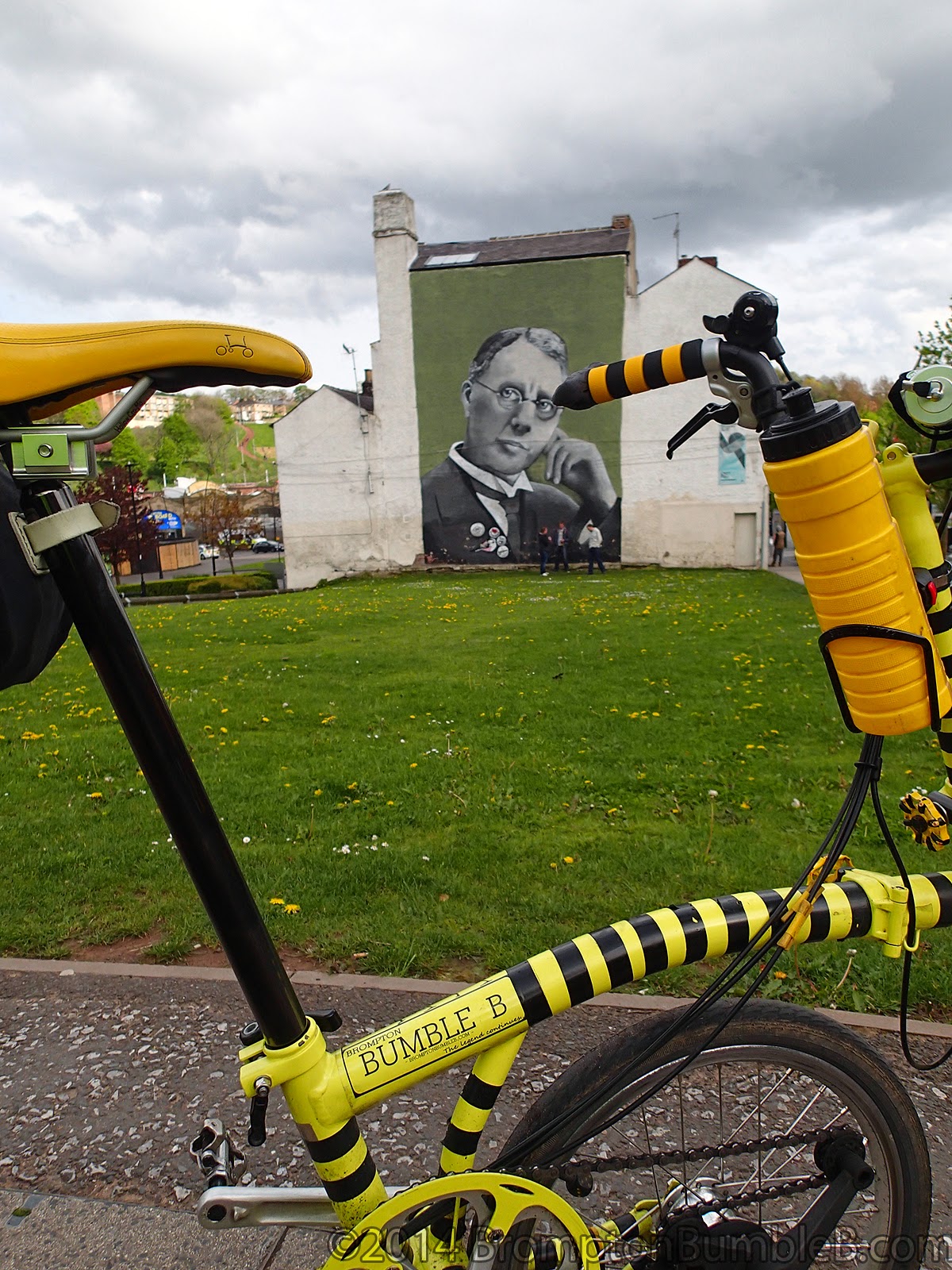 We all headed towards the station where most of the others had trains to catch back to their home, locals popped into the pub next door for a drink or 2. Me and John M headed back to the car at Edinburgh Bicycle Cooperative where we are allowed to park our cars for the day.

Special thanks to everyone involved with this now annual Brompton Ride in Sheffield. Always good to see Alan & Janet K, Mick for the wonderful guided tour of a very interesting city.

Sheffield Ride Data
Posted by Brompton Bumble B at 21:30 3 comments:

Before yesterdays LBC Brighton Ride I wasn't sure I would attend The London Classic. But in having a good ride in Brighton and then talking with my LBC clan by the time I got home I decided that I would attend this bone shaking, lung busting event.

Our preparation for this ride would be to unload as much as possible so off my Carradice Super C  saddle bag & no Mini O Bag at the front. I would be carrying everything on me. Snacks & water I would get on route cause we was still in London even though its a Sunday quiet a few places are open.

It had been raining pretty hard that morning and on the drive to Gypsy Hill the starting point which had me wondering what the hell would I do as I packed ultra light. Luckily the weather improved and by the time I got me and BumbleB unpacked from the car the rain had basically stopped.

Managed to get to the start point of Gypsy Hill Tavern where I confirmed my entry and got myself the umber cool The London Classic Round 5 tshirt. Thought I'd get it from the start cause I had no idea if I would be coming back alive. With the others waiting to push off we didn't hang about and started off down Gypsy Hill.

I didn't get a chance to take any shots before the first major stop at "Look Mum, No Hands" as the cobbles where pretty rough & wet. Needed all my focus navigate those cobbles thats for sure 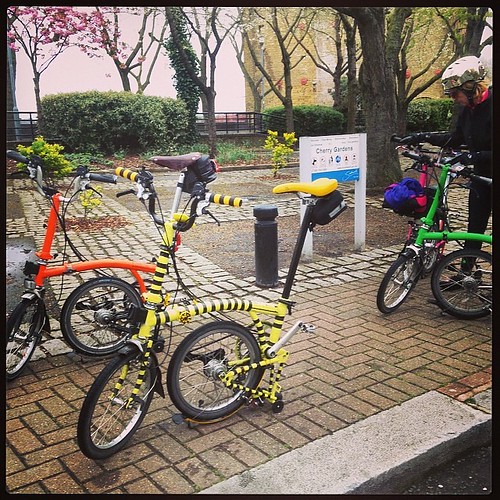 After being by the Thames it was time to head into the evilness of the hills that will be the ultimate test of man and machine. Out of the 6 hills I managed 2 of them. Took my time with them but managed them. The others though where the most evillest hills I have ever had the misfortune to come across. If I was driving a car I still would be scared of those hills so can you imagine the fear I felt when I looked up and saw these things. 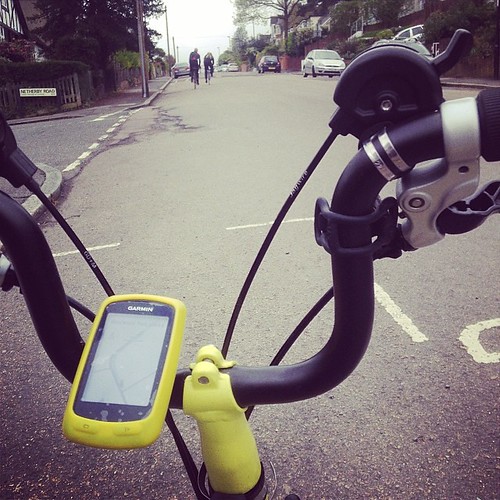 The last hill was Gypsy Hill where the start point of "Gypsy Hill Tavern" This one I killed, I may have been a little slow on it but I got in the right gear from the start, kept my cadence and breathing right and "killed it"

So that's 2 out of the 6 "Lung Busters" Hills killed. A year ago I would have walked up all, so slowly but surely I'm getting better at hill climbing.

I have to say to everyone that was at this event a big thank you for all the encouragement I got along the way, trust me it sure does help and I thank you all but especially my LBC buddies, Ann, David, Chris, Mark & ofcourse my cycling partner in crime OrangeBrompton. 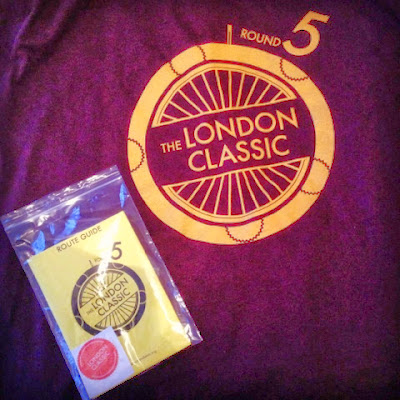 The LBC goes to the beach again.

Been here before and was looking forward to this ride to see if I improved on the couple of hills on this ride.

I arranged to meet with Mr. OrangeBrompton to catch a slightly earlier train so we could explore a little bit before everyone else arrived.


Once we arrived at Brighton Station we headed to Milk, No Sugar. A great little coffee shop we ave been to before last time we was in Brighton. Once again they remembered us and bid us welcome.

I needed something to eat as I was abit rushed to get to Victoria Station as there was delays on the underground so left without having a proper breakfast.

I had a great Tuna toasty and hot chocolate.

Not having to wait too long the others starting arriving at the station. We would be 18 strong on this ride, a few new faces and some of my regular LBC crowd.

After a briefing over where we would be going we headed off towards in the direction of Shoreham & Brighton's City Airport. 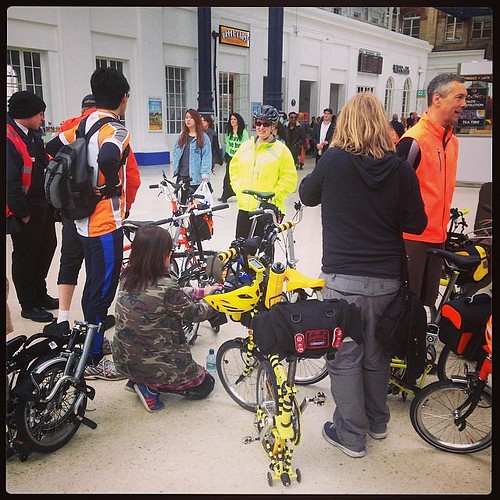 I have to say it felt like we got to te aiport much faster than last time we did this ride But I wasn't complaining as I was in need of the Red Velvet cake that I had last time. Alittle dry this time but just as yummy. 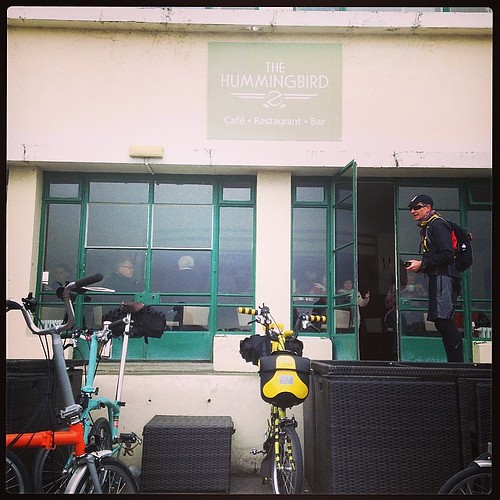 We headed back towards Brighton Pier where we had been invited to a new cycling cafe called the Velo Cafe for lunch. 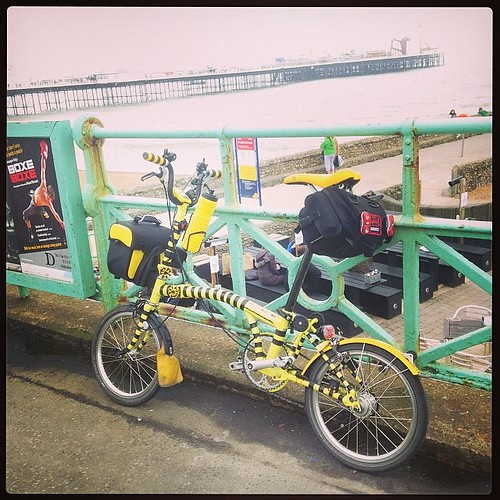 As always, there is time for a little Brompton Line up shot. It standard these days on our rides :) 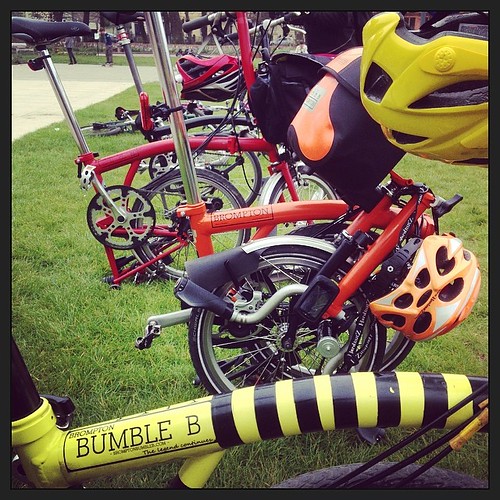 After lunch we headed to the Undercliff part of the ride. I always enjoy this bit as we get really close to the sea and see it crashing against the seawall. 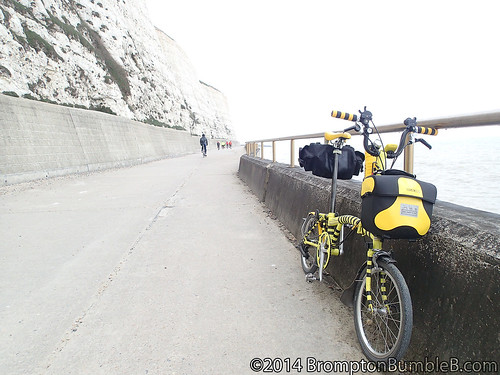 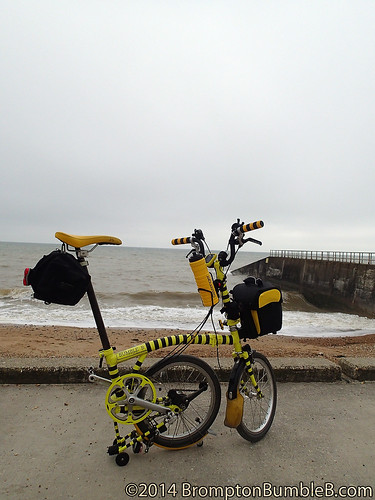 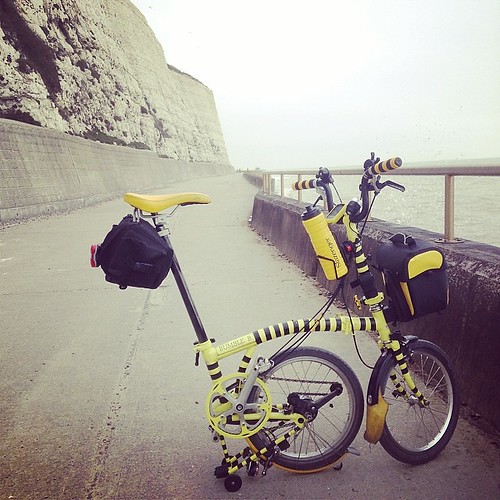 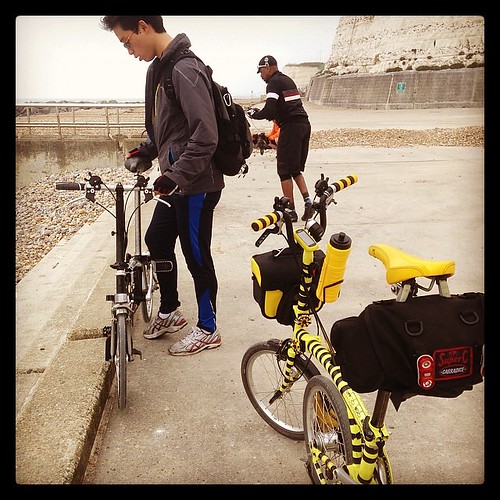 After the undercliff we began to loop back towards Brighton Train station and some got on a train, I and a few others had later trains so again we had coffees at Milk, No Sugar and waited for our time  trains home.
Another good ride in Brighton & please to say that a couple of hills I had problems with last time where much easier this time round.

Posted by Brompton Bumble B at 21:00 No comments: