Out training with Bumble B in Central London & there was alot of fans for a German football club. Their main colours are ofcourse Black & Yellow. I did notice quiet a few of the fans smiling and waving at me as I rode past even taking photos when they could. I was just riding around Hyde Park when I spotted this guy in a Bumble Bee suit and I had to stop him and say hi.
He told me he cycled all the way from Germany for the match. I wonder if I could borrow his outfit for the IG London Nocturne next month ? ;)

Just checked and my adopted team Borussia Dortmund lost to Bayern Munich, but still good to see so much black and yellow around London and all those smiling faces when me and the Legend rolled past ;)
Posted by Brompton Bumble B at 22:40 No comments:

Too tired for the FNRttC

Last night I was supposed to do the FNRttC: Burnham on Crouch with a few others from the LBC. I hadn't been sleeping to well this whole week. I ended up working early on the Friday (05:00 - 15:00) and thought I may have been able to catch a nap before the ride.

Well it was a good plan but I didn't get my nap/recharge at all and by the time I was due to leave to head to the meeting point with my fellow LBC hardcore I was too knackered and I personally think it would have been unsafe for me to ride. I think my body was holding out for the bank holiday weekend to recharge itself.

I'm sad I didn't go as it was going to be a good one as when the FNRttc ended at Burnham on Crouch the LBC riders where going to continue on to Southend itself and even a little ferry crossing in the mix. Well summer hasn't really started here yet so still time for some good rides to be had.

Speaking of which I just got the riders pack for the London Nightrider 2013 that's happening on the 8th-9th June.

It's starting to get real, real fast...

Posted by Brompton Bumble B at 18:03 No comments:

Woke up pretty early on Sunday. was excited as it would be the Brompton Urban Challenge today which me and Bumble B have been looking forward to.

I headed down to the meeting point "Look Mum, No Hands" in Old Street. A few days before I had gone past in a bus after purchasing Bumble B's awesome black seat post.

Set my Garmin Edge 800 to Look Mum, No Hands and headed off.

On arriving a police van turned up and I thought "oh dear its going to turn ugly!" but no they here offering free registering to Bike Register. They put on a serial number on your bike which is near impossible to remove and add your details to the data base. So if ever your bike gets stolen and is recovered they will be able to contact you and return your bike. Bumble B got his tattoo checked and all is good.


After registering and gathering the LBC Admin Team we all had a little catching up talk trying to figure out what we was going to do. We got clues in a red envelope, which was opened and had a good think about our first stop. We was almost ready to go when someone said that we couldn't start til 11:00hrs. Damn we thought we could get a head of the game but we got spotted.
Our first port of call was Olympia in answer to one of the challenges, if I remember correctly the question was where was Brompton's first ever award given. 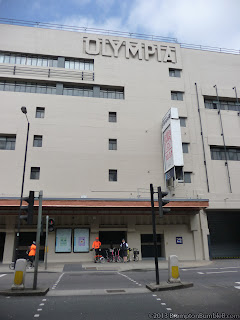 Next challenge we ended up at the birth place of the design of the Brompton Bicycle by Andrew Richie. The Brompton Oratory. 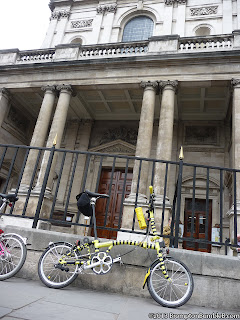 While here at the Oratory one of our group spotted there was a start pattern in the forecourt so we arranged our Bromptons for a creative photo opportunity.

I didn't remember what the next challenges where as it was all a bit of a blur in trying to figure out how to get there, get the photo and get back to the start point.

As much as the challenges we could do we headed back to Look Mum, No Hands before the deadline.

As part of the event everyone got a token for a free drink & something from the special Brompton Lunch menu. I choose the very yummy Taco type thing with Chilli. Was very tasty and everything else looked just as good. If you get the chance do go and have something to eat there


When we was there we saw a few of the photos other teams had taken and been printed out for everyone to see and vote on. 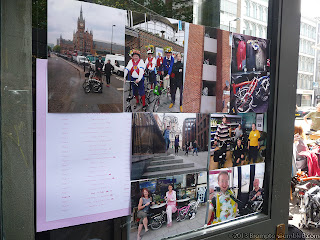 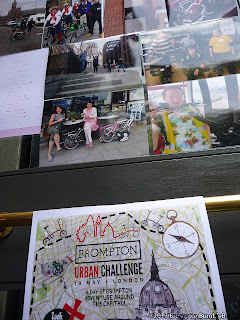 Well after awhile everyone in my team started to head back home. For me I could have just taken a bus almost to my front door but seeing it was still a nice day I rode all the way home.
On the way back I spotted this bit of street art and had to stop and take a quick shot. 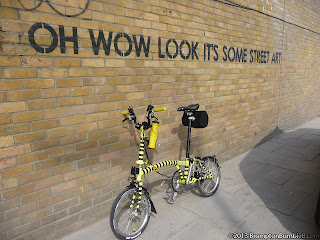 A pretty good day but then again it always is whenever we go out. Another ground breaking event organized by Brompton. May need a little more fine tuning but a good start. More ways to show the world that Brompton Bicycles are not just for commuting but also for having fun.

Next Sunday is the Brompton Urban Challenge by Brompton. This is another new event that Brompton are putting on which is very different to events of the past.

This is not about speed (cheers!) but about orienteering skill and ingenuity.

Brompton based challenges and checkpoints with clues to the next. Every completed challenge will earn the team points and the team with the most points wins. Most of the challenges / tasks will be to have a photo taken of a Brompton.

The event will also have a live feed though twitter so you can follow live. Search for the hashtag #BUCLDN

At the end of the event which finishes back at the Look Mum, No Hands HQ all those photos will be on display at "Look Mum, No Hands" in Old Bond Street  & the favourites will be framed & raffled with all the money going to Brompton's named charity: Re-Cycle I definitely will be looking for a good shot of Bumble B.

This is my first ever charity ride and for Stroke Association, UK

Me & my cycling partner in crime OrangeBrompton did the Standard Route which was 16 Bridges & about 34 miles.

As well as my normal compact camera I decided to also take my Infra-Red (converted Canon Digital Rebel) camera seeing the weather looked to be good for it and I so wanted to get my IR shots as early as possible.

For once I was DEAD on time at the meeting point and Mr.O was actually late *shock horror* yes dear readers you heard it here first. When my cycling partner did arrive we set our satnav to guide us to the offical start point for the ride which was Southwark Park, South London.
Along the way we could see a few other riders heading in the direction of the starting point so we decided to follow them. I made a point of actually asking them if they where actually going to the start point and not already on the ride.

We arrived at Southwark Park which was busy with activity & we headed to registration. Seeing that we already had our T shirts and rider numbers we was told we could head off to the start line and go.

Heading off to our first bridge which is one I'm very familiar with
I have to say this ride was pretty well marshalled. Marshall's where at all the turning points making sure we going in the right direction. As always Bumble B gets alot of good comments as we roll by.
Continuing on though London traffic I started to lose count of the bridges as I was just enjoying the day. The weather was perfect for cycling, nice and sunny & dry. It was a little windy but in the city it wasn't to bad. There was mention of rain later on in the day but hopefully we would be finished by the time the rain came.
Good bridge this with a proper separate cycle path in blue. A part of the London's cycling infrastructure (CS7)


I have to say the tourist thought it was pretty amusing seeing so many cyclists rolling past them. A few asked what we was up to and told them it was a charity ride for Stroke, UK


As we approached Pitstop 1 in Battersea Park the volunteers where handing out bottles of water which was well needed. We was promised a Mars bar but it wasn't til Pitstop 2.
Most remember to come back again to this park as it would look great for my IR photography.

As we had a little breather, drink and munches another rider that remembered me and Bumble B at the IG London Nocturne earlier in the year offered to take our photos with my camera.
and then we was off to the next bridge


As we headed off towards Richmond we went pretty close to the Thames river where there are quiet a few rowing clubs out training I would think. 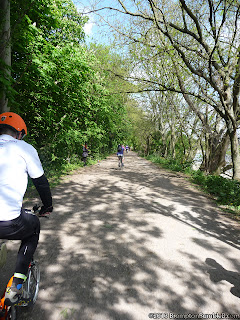 We approached Pit Stop 2 at Suffolk Road Recreation Grounds. Again lots of volunteers handing out bottles of water and the promised Mars Bar.
I noticed this lovely very friendly dog with a ball. I thought at first he was playing with his owner a cyclist but he/she wasn't.
This VERY smart dog would pick up the ball and drop it near someone and look at the ball and then the person. Inviting you to pick up the ball and throw it so he/she could play fetch. It was so lovely to see and even I had a little fetch too.

Off again as we was only at the 17 mile mark and still another 4 bridges to go. 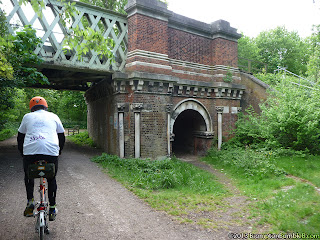 Pitstop 3 the final one before the finish near Hampton Court


After this last pitstop we pushed on though the rest of the route to finish this ride off. It was only another 3 bridges (Kingston, Hampton Court, & Walton Bridges) & only 8 miles left. So we pushed on wanting to get to the finish and head home without a big rush of other cyclist.

Once we crossed the finish line I was pretty surprised that there was medals being handed out to people that finished the ride. I have to say OrangeBrompton was VERY happy to see this unexpected gift as he has a thing for medals. Me too I'm afraid now.

Once again I'd like to thank everyone that sponsored me on this ride and there will be other sponsored & sponsored  rides in the future. Probably one of the best rides to date with all the marshals guiding us on our way and cheering every cyclist on. Made all the difference esp at the finish line where even I couldn't resist cheering myself.
The final total I raised was £80 for Stroke Association, UK.

Not bad for my first ever charity ride but then again I only started asking for sponsorship the week before the event itself. When I'm doing stuff for charity I should start alot earlier *nods*