Earlier this week I felt the need to do a "Onboard with the legend" video. I've got a number of video cameras which I haven't made very good use of.

I've been trying out a new software from Garmin called VIRB Edit. With this editor I can put my cycling data on the video at the same time which I have always wanted to do cause it just looks cool.

Below is the first test of the whole process and there are still bugs in the editor which are being worked on but looks promising.

Hopefully when the weather is much better I will be doing more and more videos, getting in practice for mounting the cameras in different places and angles.

The video below is of my foggy commute into work which takes me roughly around 25mins. The video been speeded up, my legs are not that fast, YET.

A glimpse of what is like to ride with the LEGEND.....

Posted by Brompton Bumble B at 08:58 No comments:

Tonight was the first evening ride with the Brompton Junction folks.

This would be the first good bit of cycling me & BumbleB have been on in 2014 so was looking forward to having a good blast.

Having arrived at the Brompton Junction Store I was surprised to spot some new colours in the windows. Turns out that Brompton have just released yellow O Bag & Mini O Bag. I have been wanting a proper yellow front bag for many yrs and finally I have been heard it seems. A pity though that now my cycling has changed so that I don't use front bags anymore, esp after the fateful LBC: Oxford ride back in 2012. I have to say I did have a really good look at them & MAY be tempted by the mini o bag for carrying my dSLR and short social rides when summer finally hits.


Also while in the workshop there was a prototype "Chrome" Brompton. From what I remember they are testing to see how long the chrome will last and any other problems that may come up with the process. But DANG it does look good, I personally wouldn't ride it but just have it on display somewhere instead. Too good to ride 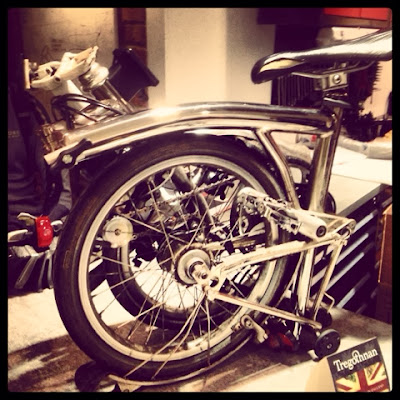 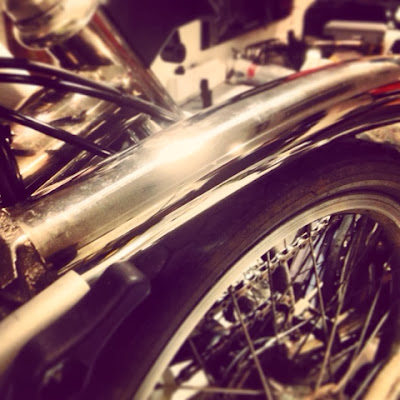 Once we all got together and thought no one else was going to turn up 5 Bromptons & a big wheeled bike left the shop and headed off into the night. As always London was busy with the tail end of the rush hour traffic as we headed towards Buckingham Palace via the Mall. With so few of us the pace was good and I could definitely feel the the strain of being not being on a decent ride since Christmas.

We went past Buckingham Palace, Paddington Station towards a very familiar canal system. No matter how many times I go riding down the canals is always fun and even in the pitch darkness. Just have to make sure you got decent lights on and your fine.

Passing around the back of Kings Cross we passed this great water light fountain right outside the Central St. Martins College of Art & Design and we had to stop and take a few shots. 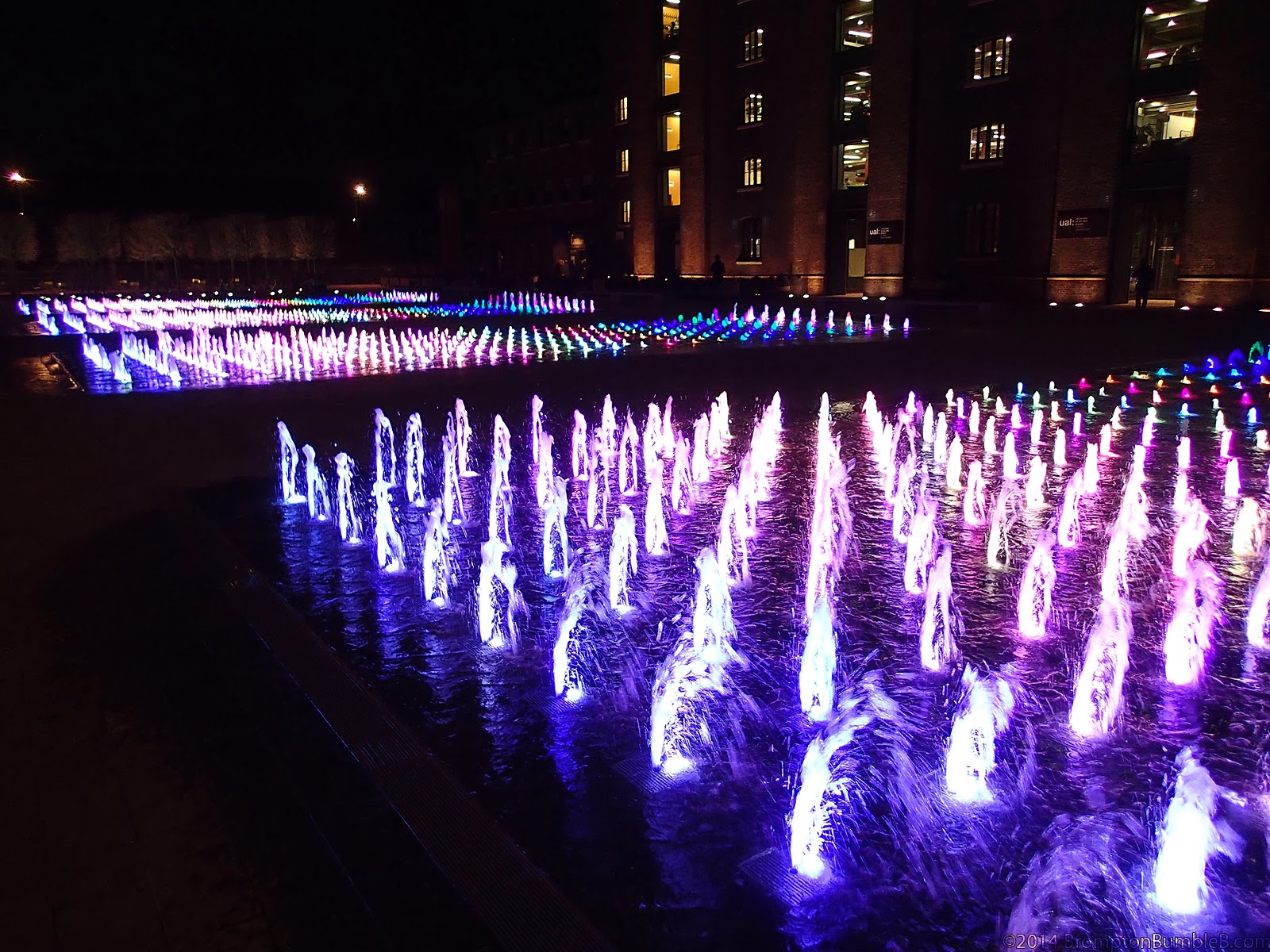 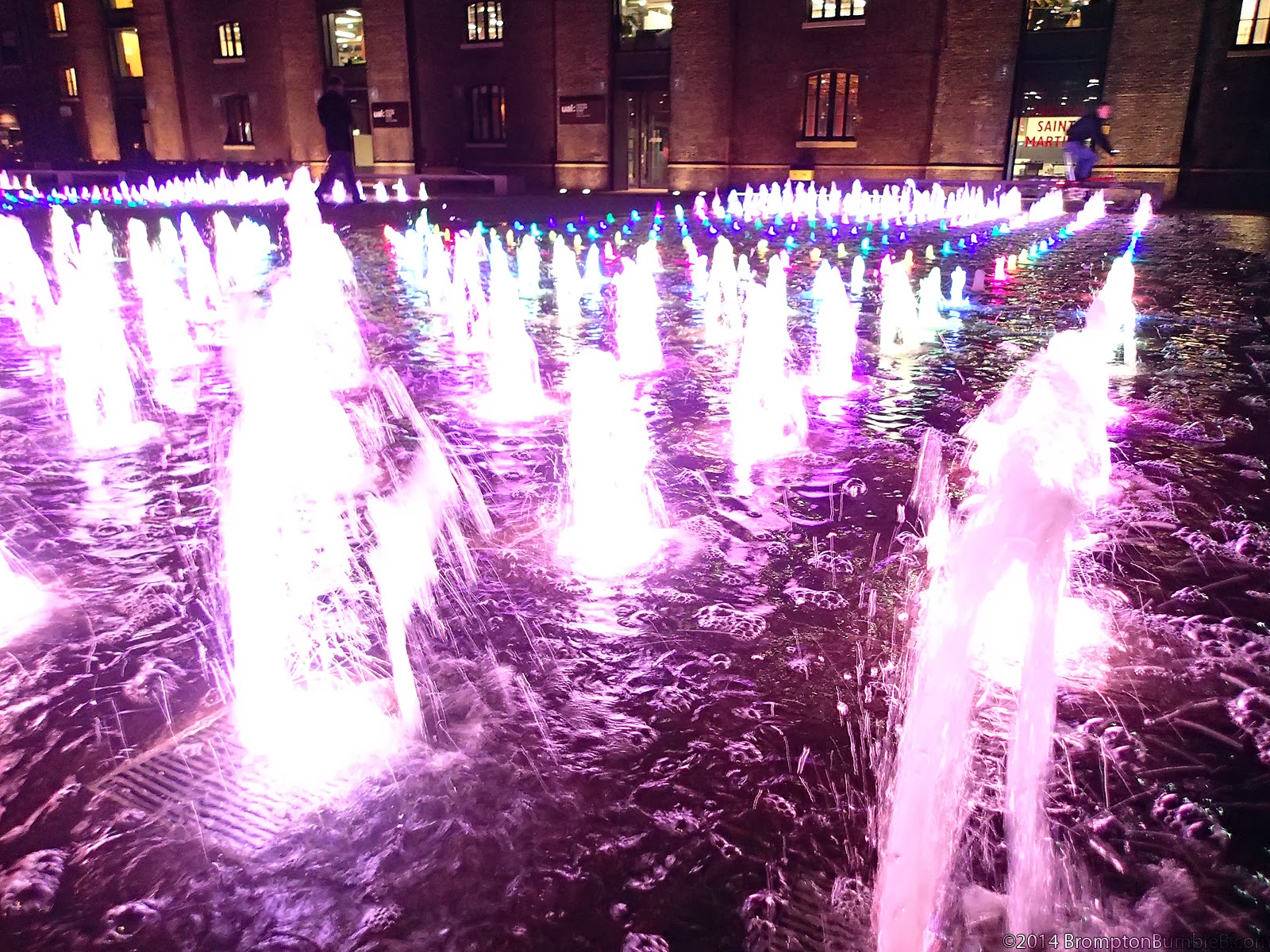 Well after this is was a quick burn to the pub the ride was ending at The Wenlock Arms.

Would like to thank Yavor & everyone at Brompton Junction, London and everyone who attended the ride.

Looking forward to the next ride.

Bumble B's Ride Data
Posted by Brompton Bumble B at 23:49 No comments:

Well today is a day that's been marked on our calendar for a couple of weeks.


This year will be different.

We have entered not just the Brompton World Championships but also the Sprint & Marathon events too.

"THE TREBLE"
Day One
Brompton Sprint: 500meters as fast as you can. Heats and then the final.

I'm liking this format alot as I will have a chance to recover to make sure we do our best in all the events.


This will be the first time we will be doing "The Treble" but I know we are more than able to do it. I remember when we did the Brompton World Championships 2012 (blog post) it was a major mistake for me to the Marathon before the Championship race. We almost didn't make it as I was so out of breath from the marathon and didn't feel that good. I know I worried a few of the LBC crew cause I looked that bad.

Brompton World Championships 2013 (blog post) was much better as my fitness level was much higher & with our official time of 00:37:56 we have something to aim for.

BUT we are now EVEN fitter and we will improve even more so with training as this will be our biggest & busiest year, watch out EVERYONE.

YOU HAVE BEEN WARNED,
TRAINING  HAS BEGUN


My brain will be overloading with the amount of HUGE events we have going on this year & you know the best place to read all about it now don't you?
Posted by Brompton Bumble B at 21:00 No comments:

One thing I have always wanted to do is put some of my cycling data on the video.

I haven't been doing much video work since the Brompton World Championships 2013 (blog post) so I thought I'm break out my "dusty" GoProHD Hero 2 & the chest mount and see what I could come up with. With the weather being so crazy here in the UK at the moment I haven't been able to get out much for proper training. No excuse I know.


Using Garmin's Virb Edit (video editing software) I can now display the ride data from my Garmin Edge 800 on the video footage I shot with the above set up. Just a quick test to feel out the software & get used to mounting the camera on my chest.

I personally think that the video is ok but unstable and shaky.

The best way for video footage for me personally is having the camera on BumbleB's top frame. It seems more stable and using the frame as a good stable reference point making the video seem less shaky.

Below is video I shot back in the summer of 2012 with my GoProHD Hero 2 on Bumble B's top frame using the GoPro big tube clamp. As you can see much more stable.

Well still experimenting with what I'm going to video as sometimes it takes time away from the actually riding itself.
Posted by Brompton Bumble B at 13:44 2 comments:

Bumble B goes on safari


Since Christmas I haven't been out on BBB much partly due to the holiday season itself and the crazy weather we seem to be having in London. So I was in desperate need of a decent ride but nothing too
strenuous in between the the heavy rain and high winds.

London is unique in the number and variety of its lion statues. If you ask Londoners how many such lions they think there are, they usually say, 'There are four in Trafalgar Square' and they pause . . . then 'Oh yes, there's also one by Westminster Bridge.' In fact there are many thousands more, from the oldest and snootiest to the cheekiest and saddest.

We set off on Safari to find these and other lions, from private homes to Rugby grounds from bridges to gateposts they overrun the capital, how many would we find.

Expect to visit the city, Barnes, Chelsea and possibly Twickenham, although this is a social ride and will be modified on the go to suit the majority.

We will lunch, Lions are not freely available, so we may have to settle for a Giraffe!

Well with that I thought why not. Checking the weather the previous night I finally decided to join the ride. A few people where going to meet up at City Hall & then head down to Cutty Sark Gardens. 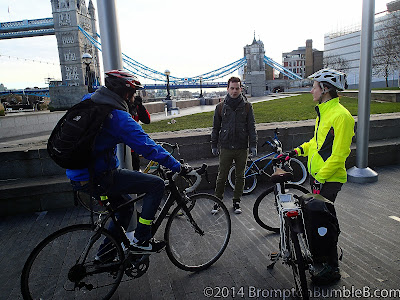 One of the riders even came on a BMX bike, yup and he kept up pretty good I might add.

I took the lead as I don't think anyone had a great idea on how to get to Cutty Sark Gardens so I put our destination into my trust Garmin Edge 800 and took the lead. Not long after we was at the Cutty Sark. Turned  out thsi was a popular meeting point for cyclist as we saw a few other groups of riders and actually asked a few if there we're going on the "Lions of London" ride.

Finally found out group which turned out to be about a dozen in the end. Having met up and told a rough outline of the route/place we would be visiting we headed off. 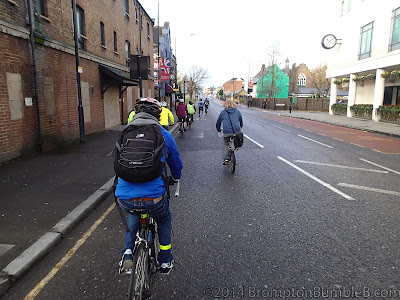 Some small lions, had to really look hard to find them. 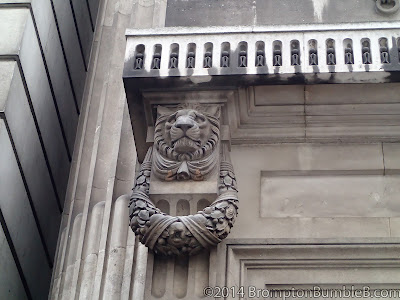 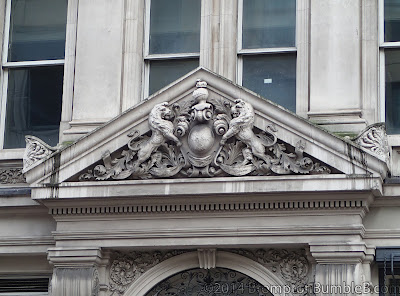 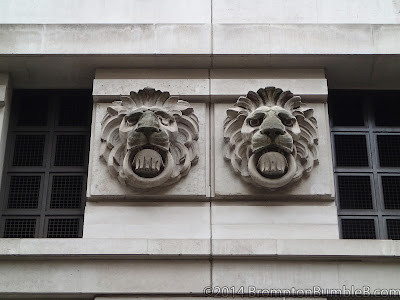 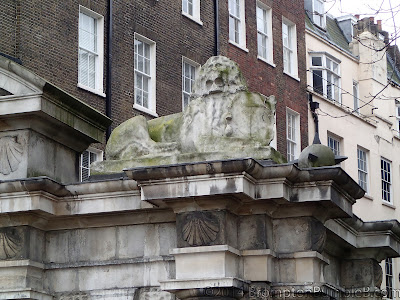 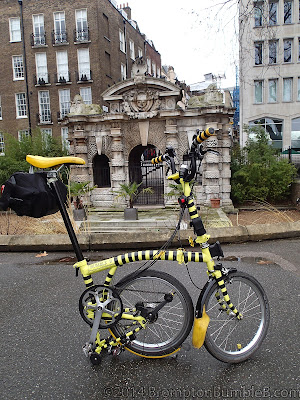 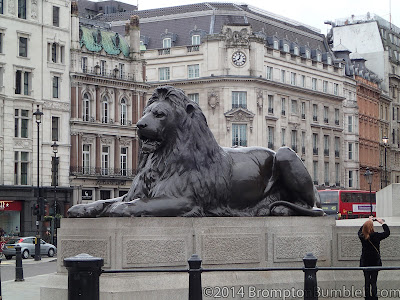 Just as we was leaving I spotted this Falconer with 2 falcons flying around the square.  You could get right up close to the falcons to and not a pigeon in sight LOL 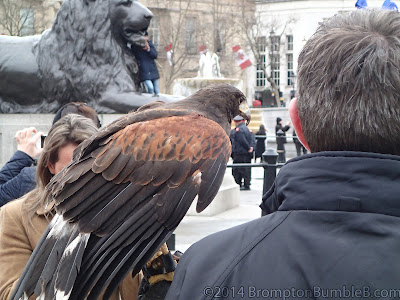 Well we had done a good amount of riding and I was thinking at this point it was time to head home. The weather had been pretty good but the last hr or so the temperature dropped so thought best to be heading homeward back to "The HiVE"

Me and Gus U live not far from each other so we decided to head back together, we did get a little lost, well not lost we went around about route back to East London but it was good to put on some extra miles.

A good interesting and VERY different kind of ride.

Posted by Brompton Bumble B at 20:02 No comments: