On one of the LBC rides that I wasnt able to attend due to work I heard that someone had a puncture and with abit of team work had the tire repaired and ready to roll in no time. The thing that caught my attention was that someone had a C02 regulator to inflate the tire. I'd never heard or seen one of these in action but was very interested in the idea of having a little C02 bottle  to get the tire back up to pressure.

Mark W a member of the LBC group had ordered some CO2 bottles in bulk and I managed to get in on the deal with a couple of other members. Turned out I got 13 C02 bottles (£6.50) plus the free one that came with the regulator I bought at Action Bikes that cost about £17.99 I think


I don't think I'll be running out of  CO2 anytime soon
Mainly got this little thing for when on group rides, if anyone has a puncture we can get the job done quick and up to pressure in seconds. Also have to thank the guys at Action Bikes that made sure to warn me about when using this thing the bottle gets very cold and to always make sure use the rubber sleeve.

While coming home from the LBC Ride: Greenwich Loop on the 17th November I stopped off at  Action Bikes  under Embankment Bridge

I've had a couple of CatEye front lights since first getting Bumble B. They are good but the only thing I don't like about them was that the light was not directional and I would get a little blinded by the flashing. I heard of these Lezyne lights as they are alittle smaller than the Cateyes and brighter.

Another great day ahead of me & The Legend going on the LBC Club Ride: Greenwich Loop planned and organised by a member of the club, Mark W. We was going to try and go under, over and on the Thames River.

Before the main ride a few of us wanted to ride the ferry on the River Thames to Greenwich  where we was going to meet the rest of the LBC Gang.

As I left my house there was a little dizzy going on which didn't look like it was going to give up any time soon but it was a short 10min ride to my station.
Well finally arrived at Piccadilly Circus to meet my cycling partner in crime  Mr.O and head down to Embankment Pier to catch the Thames Clipper to Greenwich.

Met up with Mr.O & a few other member's making the ferry ride. As always its good to see other members of the LBC and we all caught up with whats been happening with us and any new upgrades etc on our Bromptons. Then it was time to jump on the Thames Clipper and head on to Greenwich.


When we got to the London Eye a few more members of the club joined us and we enjoyed the river boat ride. Going past so many london landmarks I spend most of this trip outside taking photos of everything as they went past.

Bumble B's first time on the River. He as a little scared at first but enjoyed it I think. 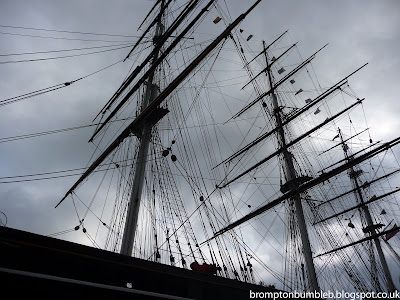 If you look closely at the art work at certain angles you can see a figure of a human in there, very cool 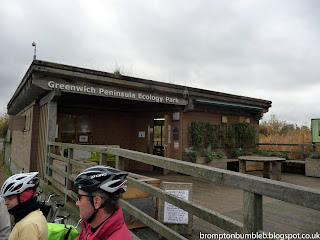 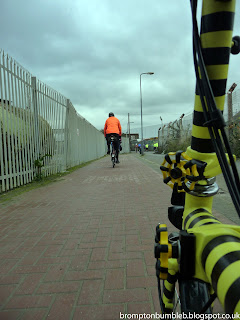 Someone suggested about parking up our Bromptons on each of the Status and getting out of the way. 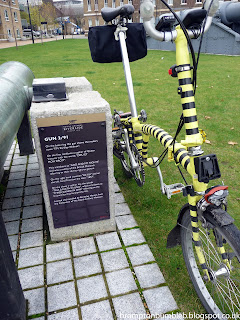 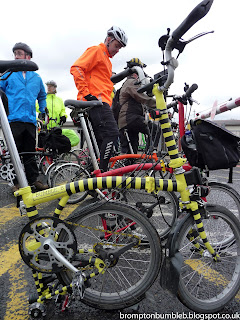 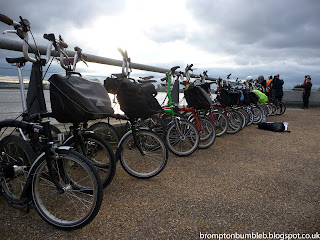 Been looking forward Emirates Skyline Cable car since it was first suggested, over looking the other London landmarks as it go. 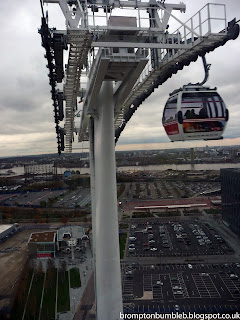 This is just before the big decent into the Emirates Skyline docking port at the other end. Felt like abit of a roller coaster as it really dropped quiet fast. 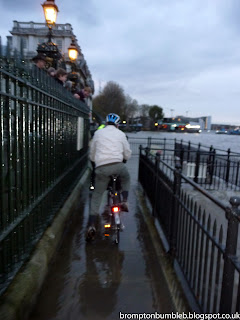 Seems we where coming down this small path right next to the river at high tide as the path was getting waves. I ended up with 1 shoe wet but the other dry, very strange feeling. 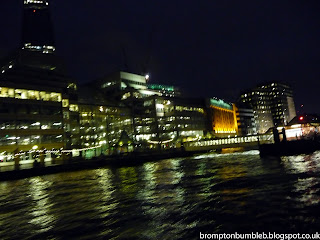 An awesome ride, I keep saying this but it was the BEST LBC Ride. Every ride gets better and better, the company is awesome, the bikes are already awesome, the ride itself is great and the way people watch us as we roll past is just great. Most of the time people always stop one of us and we always talk about how great the Brompton Bike is and demo the fold and how easy it is. This time I forgot to take my business cards with me but I was in abit of a rush so forgot the small things.

Everyone enjoyed themselves and everyone is already looking forward to the next ride. If you want to know about the next ride, join London Brompton Club and check events section for upto date information on rides.

Below ofcourse is my Garmin Edge 800 GPS stats of the ride.