Almost forgot to post my riding stats for the day

Its probably a little more as I didn't notice that my magnet for the cycle comp was out of alignment so didn't record the first 5 miles or so.

But this is me riding partway to my local station, the ride itself and then riding all the way from Waterloo to East London (near the Olympic Games Site)


After lunch we headed out, I got to say the wind really picked up on out way from the beach and was pretty evil.

On our way back we stopped off at where a big estate had a mini steam engine to take you around to show you the grounds.


Off we went as a few of us had trains to caught back to London. It started to rain a couple of times, I think the big man was giving us a hint to get moving to catch our trains back.

Me and my travelling buddies pushed on back to the station, I think we even went the long way but got to the station with just 5 mins to spare. As we left the station on the train we saw the rest of the LBC gang in the carpark. Sorry we couldn't say goodbye in person, next time promise.

Me & Bumble B having a well earned rest on the way back to London, I even caught a little sleep on the way in.

Finally got to Waterloo Station and me and the guys wondered towards Embankment, from there we parted ways as the guys where heading towards Kings Cross and I was planning to go to Charming Cross Road and head back along my bus route home.

On my route home I came across some Olympic Games icons with Bumble B, I think some of the tourist where abit bemused by me and Bumble B (The Bumble B Effect)

Took me awhile to cycle ALL the way home but was worth it for training etc. 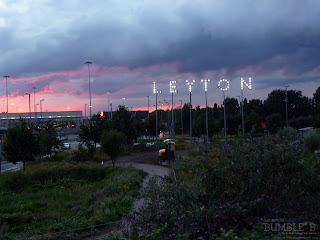 I went passed the Olympic grounds abit but didn't hang about taking photos too much as security was hanging about but managed to get a quick pic of this new sign in Leyton with the sunset in the back ground.

I'd like to Thank Mick for doing this little ride for the London Brompton Club in the New Forest. It was awesome and seeing all the other riders too who I've seen in the group commenting and posting etc. Definitely gotta try and do more in time, try to get something set so every month we do a club ride somewhere.

Once again thank you to everyone that attended and made it one of the best cycling/Brompton days I've had.

much luv
B
Posted by Brompton Bumble B at 12:24 No comments:

The dawn of a new age.
People said it couldn't be done, SHOULDN'T be done but we are Brompton Riders, we do what people only dream about. We take our small wheeled buddies and take on ALL comers, big or small & we just keep on pedalling on....

Ok enough of that, getting abit carried away there >:D

Woke up bright and early all excited and having no idea what was in store for me and "The Legend..." I knew he was ready but was I, time will tell.
Got myself all fuelled up ready to go and checked on the weather. It looked to say that there would be "PM Showers" so packed my heavy waterproofs and took a couple of backup "Ponchos" someone managed to acquire for me the day before (thanks mom). Ever since the Brompton Factory Ride & Open Day 2 weeks ago when the Brompton people provided them for a few that didn't have waterproofs on that VERY rainy ride (well to start with anyways).

Cameras all packed up, water-bottle filled, few snacks and ready to ride the hell out of the New Forest. Cycled to my local station and jumped on the train which just so happened to be one of the main routes to the Olympic Games sites. Abit of a large crowd for a Sunday morning but me and Bumble B got on the first train without much fuss. A few giggles along the way as the "Bumble B Effect" was in full force with me in my black & yellow striped socks and matching yellow cycling gloves & ofcourse Bumble B.

I was running a little late as I normally like to get to places early so I can relax and chill out but got to Waterloo Station with about 10mins to spare. There where 2 other LBC members (Alan Bailes & Geoff Snell, hope I got that right) that where coming on the same train as me as far as I knew. Entering Waterloo I got my tickets & began the easy search of finding the LBC Posse which was pretty easy as they would have Bromptons (ofcourse) & I knew one had one of my Tshirts. Finding my travelling partners we said our hellos and made abit of small talk. Almost missed our train due to grinding coffee beans and folding our bikes in a hurry which always doesn't work and end up with a Brompton undoing itself while getting on the train. Finally got on the train and found a nice big area for us & our B's to relax.

But after 5 mins of heavy rain it stopped, seemed the cloud was dumping its rain just on that station cause as soon as the train started moving again the rain stopped (Thanks Big Man).


Arriving at Brockenhurst BR Station, we were greeted by big smiles from Mick & another LBC memeber. Hand shakes and hellos then we moved to the main meeting point in the carpark. I have to say that the area around the station is pretty geared up for cyclist as there are places for you to rent, repair bikes right next to the station and we saw alot of other bikes & families on bikes getting ready for a day of cycling in the New Forest.

As always as Brompton owners we kinda checked out each others bike see what additions we had made. A few mental notes added to my list of upgrades >:D

Once everyone that was coming arrived we all got a short briefing on what we was going to do as well as a handy little hand out with a map and places of note (VERY professional Mick) I had sorted the weather with "The Big Man" and it was turning out pretty nice and sunny but not too hot, perfect cycling weather. 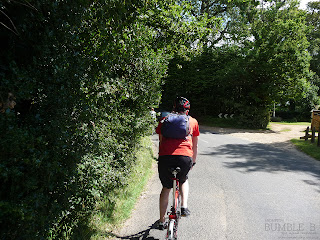 So with Mick leading us we was on the road. Nice slow pace to make sure everyone was together and getting warmed up.

For a little while we was riding in the forest so it was very shady but then it really opened up to this....

I mean look at that WIDE OPEN SPACE. Glad the sun wasn't too hot as I think some would have been pretty sunburnt but it was lovely and the wind wasn't too bad either.

We pulled over at this spot where there are wild horses running about all over the place. Mick had a little talk about the area saying it had a role in the D Day landings during WWII.

Off on the road again at some point we made what Mick describes as a "Planned Detour" and his sticking with that story but I think we was just lost. But I can think of worse places to be lost in.

I have to say the little look at had at this badboy satnav, I may just have to look into getting myself one at a later date esp if I'm goign to be cycling alot more and maybe even cycling further afield. You can even download maps and cycling routes all over the world for rest as well as log your own rides and post them on-line. I'm always afraid of battery drainage but from what I've been told they are pretty good on the power front.


We finally figured out that we went passed a turning somewhere so went back along where we came.


We arrived on the coast where there was a great beach cafe for some lunch. I had an awesome Bakewell tart freshly made etc too, yum yum wanted seconds but thought better of it as we still had alot of riding and a few hills to do.


After lunch we all rested a little and I had a closer look at the Bromptons.


After lunch Mick had a little surprise competition for us all. A "Fold Off" who could fold and unfold their Bromptons the fastest won a prize.

Oh bugger I forgot to take off the GoPro Camera clamp off my seat post so couldn't complete the fold :(

and here is the winner and prize

In the car park I spotted this awesome looking yellow and black van, how could I know take a quick pic of me, Bumble B with our 4 wheeled cousin.

As always with the Brompton, people are always interested in how they work, fold and how easy to ride they are. One of our member's giving a short talk about the gearings to the staff at Lepe Country Park

It's seems that without "Bumble B" I'm just a nobody. On my bus passing Angel Station I spotted one of my members of the London Brompton Club & beeped my bus horn and .....nothing

No reaction other than the look of "Do you mean me?"

Pointed to the bike not sure if she thought I was just saying good bike or if she recognised me in the end.

I couldn't help but take this quick photo while I was at work yesterday. I luv it >:)
Posted by Brompton Bumble B at 07:00 1 comment:

This is the video I shot during a Impromptu London Brompton Club Ride in preparation for the Brompton World Championships 2012 in August. Just 4 club members meeting up last minute to enjoy a nice Sunday sunny day :)
Posted by Brompton Bumble B at 07:15 No comments: