The legend does the #BWC2014 TREBLE

The day we have all been training for and had it our diaries for months.

All the training was done.

All the maintenance was done.

Getting the cycling outfit perfect was done.

I had finished tinkering with BumbleB early in the afternoon and the legend was ready. I managed to get a good nap in the afternoon as I knew I wouldn't get much sleep the night before Brompton Cycling Festival.

Woke up bring and early as I normally do  and packed the car and we was off to Goodwood Motor Circuit, Chichester. The traffic seem quiet light and I was grateful as I wanted to get there in plenty of time to soak up the atmosphere as I had missed it so much.

I spotted  that Mark W had recently arrived. First thing I wanted to do after registering was to get a photo for the front of the Goodwood Motor Circuit. So off we went into the site to see what was on show. I also remembered to pick up a few items I had ordered and wanted to make sure they fitted so if needed I could swap. Now heavy with goodies me and Mark W headed back to our cars to offload everything and spotted Mr.Orange heading in. Looking very happy to be back at Goodwood Motor Circuit.

As I wondered around I had lots of people coming up to me saying they have read this silly little blog and enjoyed all the adventures me & the legend have been on. It still surprises me that people read my ramblings and people from all over the world come to this event which I think is totally awesome. 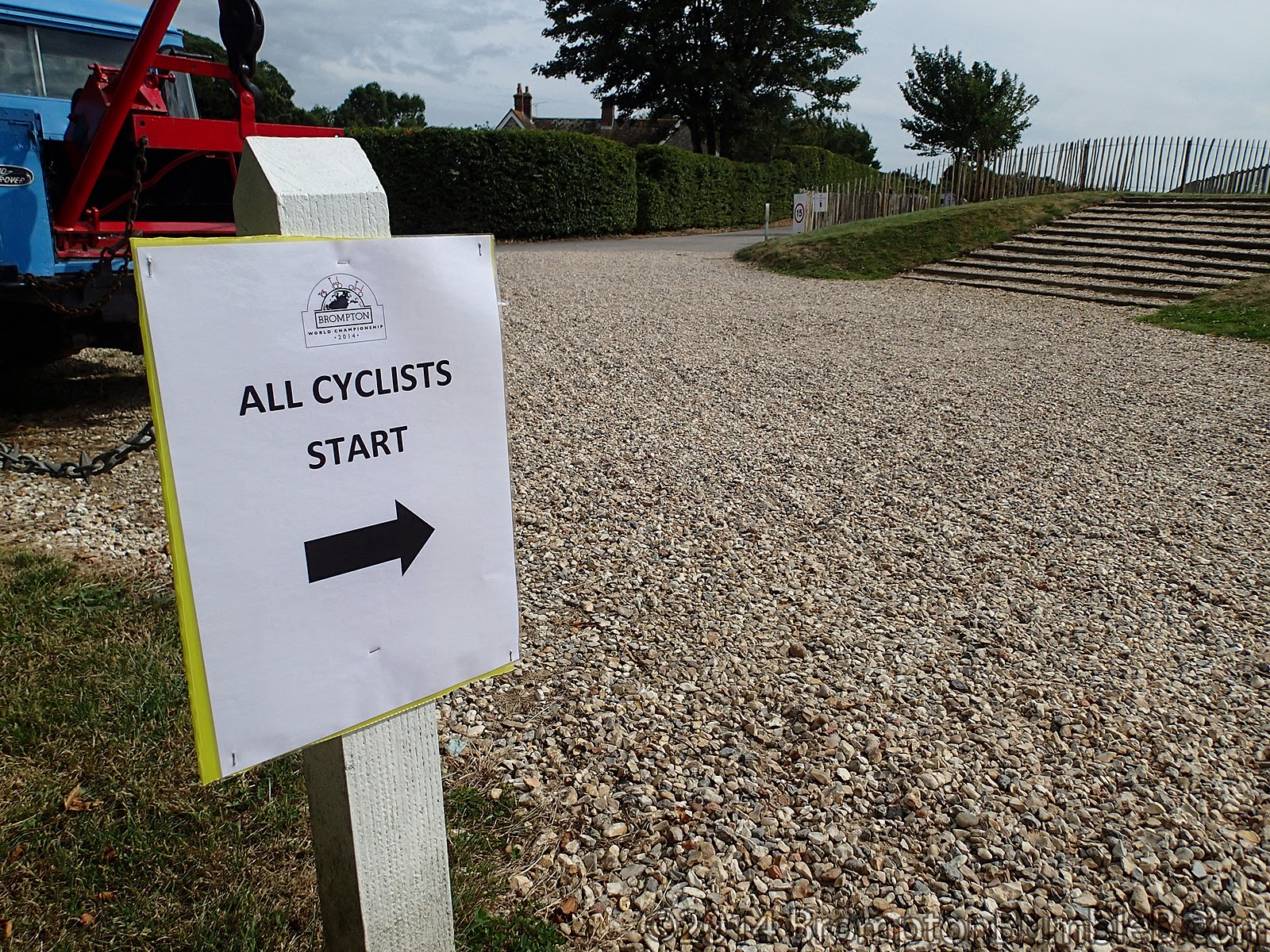 It just goes to show you the "Power of the FOLD!" 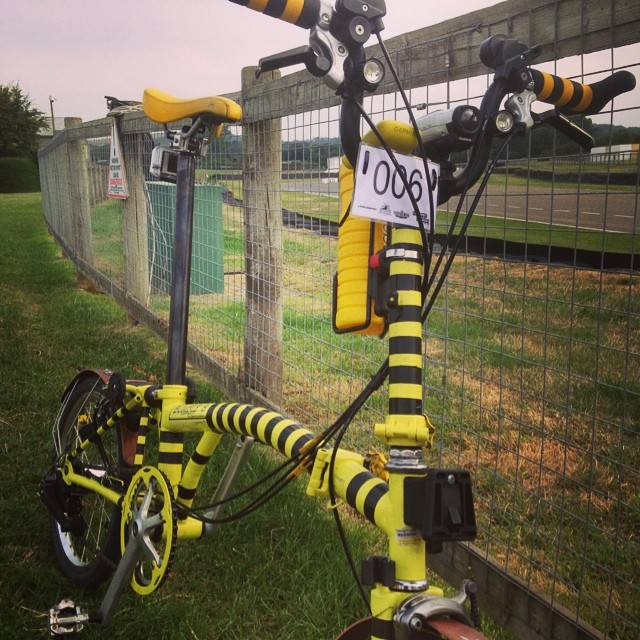 First on the timetable was the Brompton Sprint.
12 Riders 500 meters away from the finishing straight with Bromptons in the "parked" position. Then riders stand about 10meters away for a "running start".

I've never done this before so was abit nervous. We would set of in groups of 12 so I didnt step up til  I had see a few groups set off to see how it was done. It looked pretty easy but then again, actually doing it is another thing completely.


When the horn went off and I ran as fast as I dared cause I realised at the moment I had never actually ran with my cycling shoes. Grabbed BBB by the saddle rolling him just to make sure I didn't slow my momentum down step onto the left pedal but NOT clipping in, got my right leg over the top bar, clipped right first then the left and pedalled like crazy when I was clipped in fully. It was pretty intense and I knew I had a pretty good cadence but not the stamina. After about 300m I could feel myself flagging abit as I couldn't keep the pace up.
Update: Thinking back on it seeing I was on a 44T chainring my cadence had topped out at around 120rpm, with. 50T chainring my speed would have been faster at the same cadence. So I think I did pretty well on a 44T
Next time I will do a warm up lap as I didn't do anything to warm up this time.

Thanks to Penny G for taking the photos during the Sprint

Now after the Sprint was the 26km (14miles) Brompton Meander around Sussex country side. First of was 1 complete circuit of the Goodwood Motor Circuit and then out of the main gate onto the country roads. We had plenty of time to get around the course and there where plenty of marshals along the way cheering and pointing us in the right direction.


Just before the first pitstop there was a huge long hill which even with my reduced gearing spanked me hard. I did stop a couple of times as I wasn't focusing on my breathing to well. Note to self to do more training on my breathing.


I thought the meander was going to be longer for some reason and brought my hydro pack full of water. If I'd known it wasn't going to be long and also have 2 pitstops I would have just taken my normal water bottle and left my mini O bag as we had full motorbike support and ambulance crews near by.

I have to say I did like the scotch egg, which was no supermarket job that's for sure. I also sampled some crackers with cheese which may have sparked off a slight headache but could have been cause I wasn't drinking enough fluids but after having a few big mouth fulls of water it quickly passed. After leaving the first pit-stop it was ofcourse time for the down hill. I ALWAYS love this part and it didn't disappoint me.

Actually there was a disappointment as I was speeding down the hill and cars where actually slowing me down LOL I checked my data on this part and I topped out at 44.5mph which is now my highest speed ever ;)


Didn't stay long at the 2nd pit-stop and almost forgot to take a photo, another nice choice of munches to keep a Bromptoneer going.

Finally coming back to Goodwood Motor Circuit I was greeted by Bob H one of our LBC members handing out me second medal of the day.

With the Meander done there was a few hrs to wonder around and as always I get stopped often and people asking for photos of them with the legend. One lady I think was French or Spanish seemed very excited to finally meet the legend and with me not being able to speak a different language and her English not so good but we muddled though and she ofcourse for a few snaps together with the legend.

Now it was starting to get even more busy and the main event was next to come, the Brompton world Championships. Soon there was Bromptons everywhere in every different colour, every where you looked you saw something different. What I love about Brompton bicycles is that EVERY bike is the same but then people put there own personal spin on it to make it truly there own, basically an extension of themselves & personality. 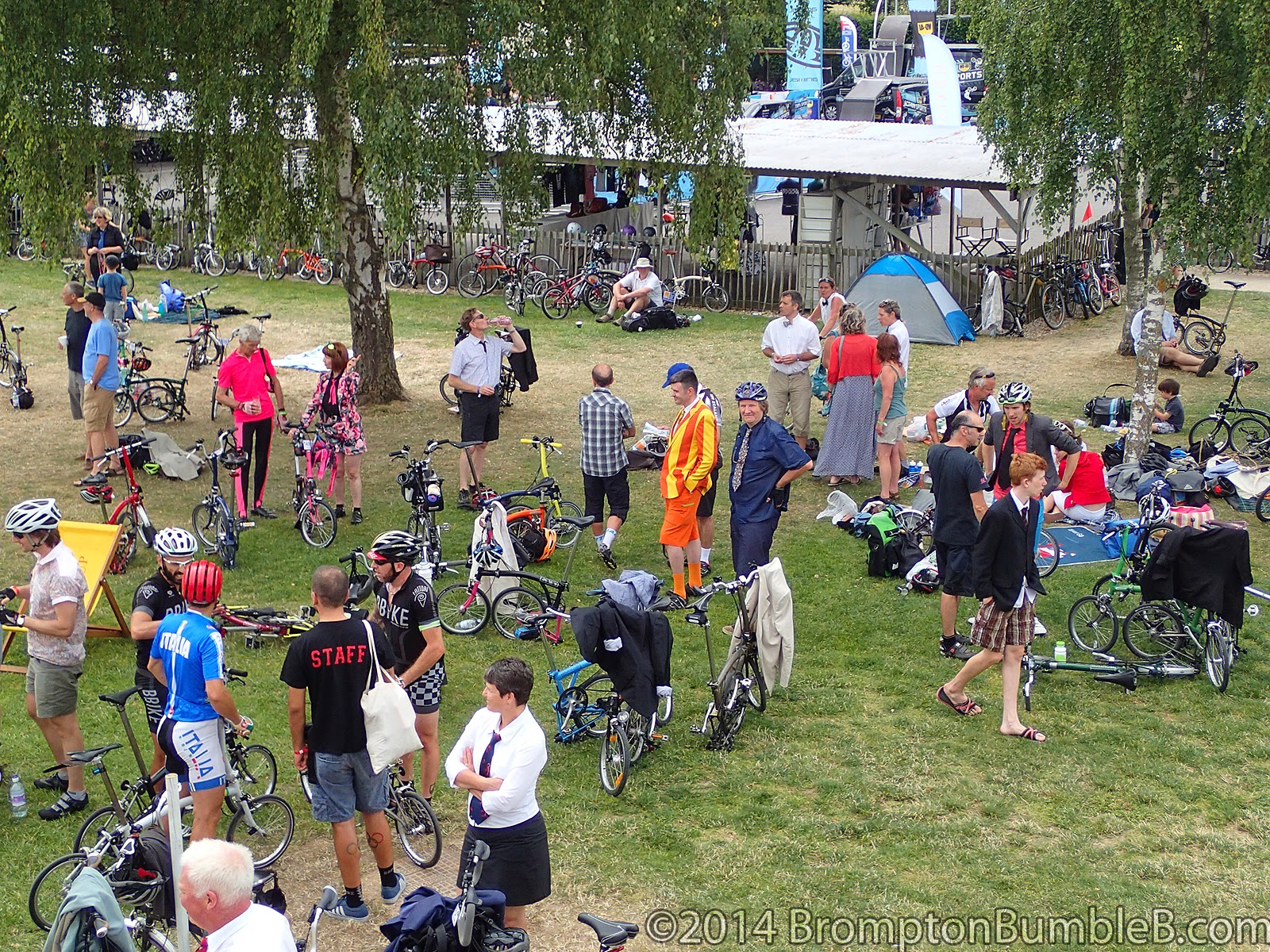 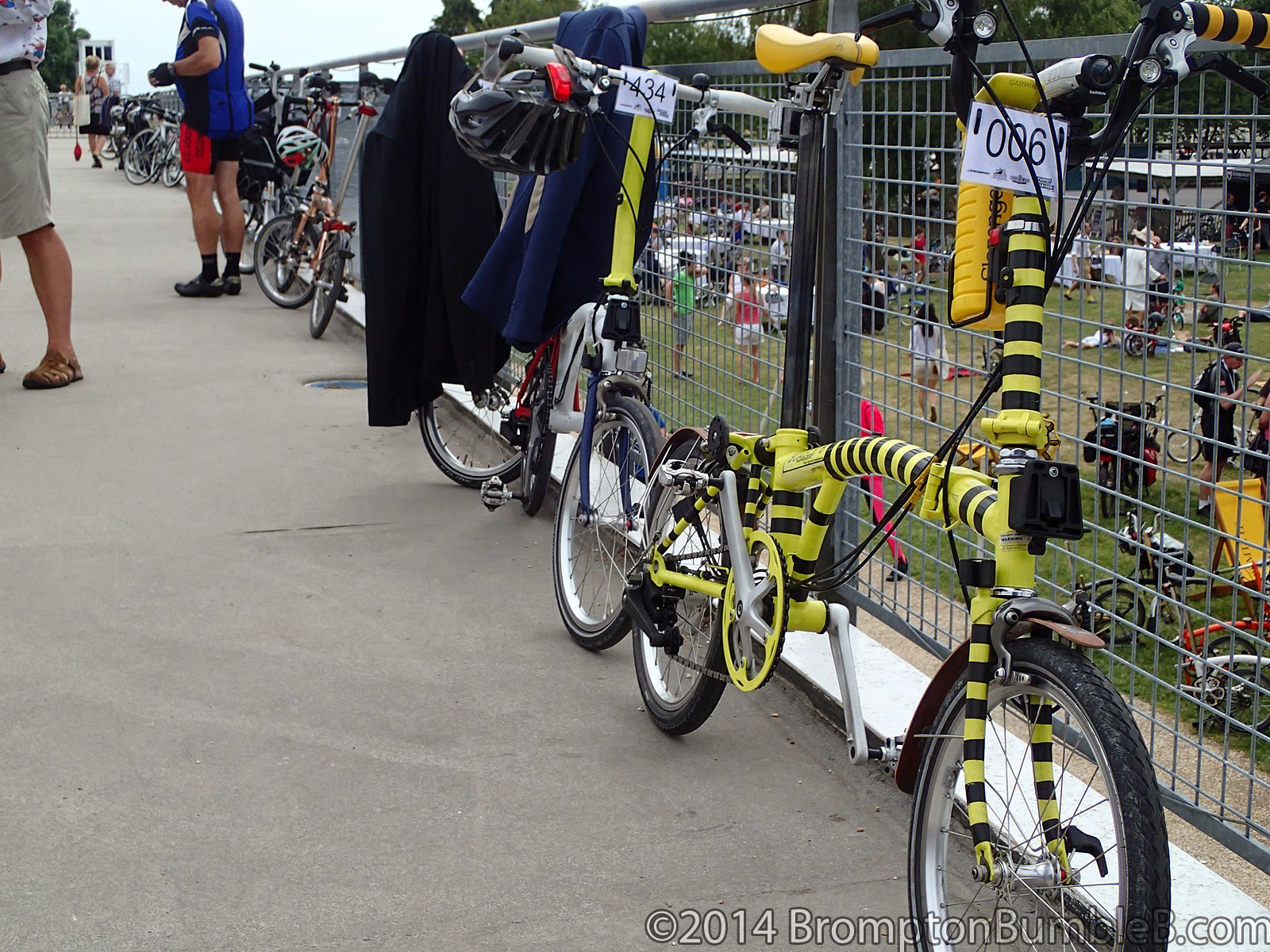 Then it was time for the main event itself. Being rider number 006 meant I had a good run though folded Bromptons before I even got to BumbleB.

I forgot to take BBB's water bottle off as I had been drinking alot to stop myself from dehydrating also figuring about the weather but I didn't hear anything about not wearing the jackets like last year as the weather was alot hotter then. I knew I could leave the bottle at my start pin and retrieve it later.


At this point I was starting to really get nervous. I was nervous that I wouldn't be faster than last yr, had all the training, sweat blood and tears been for nothing.

This was the moment of truth

The moment the legend will rise or fall....

Our focus narrowed to the task at hand.....

I heard the horn go and I wasn't running or walking towards BBB. I was almost floating in some way. I felt very charm even though I was unfolding BBB, rolling off the grass where I would clip in and cycling intensely for the next 30-40 mins.

Off out onto the track I felt I was going into reverse as lots of riders seemed to be passing me by without any effort. But my mistake last time was to try and chase them down and waste energy. Over the past year I realised that I have to pace myself and even though somewhere serious riders not all of them will be gone in the distance I will slowly but surely catch up to them and even past them.

All the videos and techniques on "drafting" came to mind and I was on the hunt for someone of same kind of pace esp when there was a headwind hitting me I could hide behind them getting alittle rest. I have to say I never really though this stuff worked but having used it properly it actually does.

After the 2 laps heard someone coming beside me, saying he would take the lead for awhile, hell someone had been drafting me alittle but decided we was of the same pace and would help each other out. Our own little 2 man cycling peloton, I have to say it actually made the race easier and I felt my average speed being higher than BWC2013.

I just focused on my breathing and cadence, when I felt a little flagged my new peloton buddy would take the lead for awhile and when he flagged abit I would take over. When Travis B (later found out) took over I would focus on his rear wheel so hard nothing else existed. I swear ALOT of the time I was less than 3inches from his rear tire most of the time.

I set up my garmin to show me the my last lap time & my average speed so I could work out if I was atleast keeping the pace. To my surprise when comparing the data I was actually shaving seconds off each lap and my avg speed was WELL into the teens (17.1mph to be exact)

We came around the final corner and Travis B came along side me again and we shook hands down the back straight and he asked " shall we cross the line together?" I said yes but then I said to Travis B

He agreed and we went full out on the last 150meters or so. Don't ask me where the hell I got this sudden power injection from it just happened and next thing I know I'm pedalling like the devil was on my butt trying poke me with a fork. According to my data this is where I did my Max speed for the ride at 27.9mph

With having to change the Brompton Festival to a 1 day event Brompton very kindly offered everyone a voucher of £20 to be spent on the day, which I spent on a nice pair of Brompton socks & a china mug.

I'd like to thank Brompton Bicycles, Goodwood Motor Circuit & everyone that attended an awesome day of pure Bromptoneering.

I hope to see you all next year cause I sure will be there and even faster than ever, trust me is going to be.....LEGENDARY!!! :)


This weekend it is the biggest event on our calendar, the Brompton World Championships 2014 @ Goodwood Motor Circuit.

We have entered "The Triple"

Have a quick read of 2013 event with photos and even a video of the ride itself in the link at the end of this post.

I always get very excited afew days before as it is the biggest event on the legend's calendar. As always we shall be suited & booted and will be very glad to meet our fellow Bromptoneers from all over the world and see and hear about latest upgrades & rides around the world. As always Brompton have never disappointed when organizing any event they are involved with.


Over the next few days I shall be doing some serious maintenance session to get BBB ready for Sunday, mainly cleaning. Also got 1 last item to get for my outfit. Also making sure every gadget I have as well as myself is FULLY charged and ready to go ;)

So please if you are coming to Goodwood Motor Racing track on the 27th July, please say hi to us, I don't think you will have any trouble in finding us ;)

Posted by Brompton Bumble B at 19:00 No comments: