Well today was the first event that me and the legend have attended for a VERY long time.

The legend was all prepped and ready to rock and roll. Thanks to the guys at Brompton Junction London for giving him a complete overhaul, fine tuning and race fit.

We haven't attended the Nocturne for a couple of years so I was a little nervous if i was honest but once I was on my way there I felt a lot better and knew I would be seeing all my cycling friends again which i haven't for a long time.

Was going to try and meet up with my cycling partner in crime My Orange Brompton & Mark "King of the Hills" but with everything closed off and blocked it was going to be impossible for me to get there so I went straight to the registration desk and signed up.

As always the legend gets lots of attention, a few folks said they remembered us from the last time we attended, well we are kinda hard to miss, just saying.

After makign sure Bumble B was all tucked away and safe I went a wondering around with Orange and Mark to check out the riders area.


The guys looking abit serious starting to get their game faces on.
Slowly but surely the riders area started to fill up with more riders and bikes. Many hand shakes and hellos to everyone. Started to check out each others bike to see what improvement have been made and any secret additions. Its all hush hush of what they have done.

When I checked out Joe Browns machine I thought "Damn his got a dinner plate for a chain ring on !"
Some serious machines for the other bikes racing today with their turbos and rollers.

As we was walking around me and Orange Brompton got interviewed by a camera crew, abit embarrassing but got to get used to the attention we get when in full Brompton race mode. Will try and look out for the footage and post it here if it made it though editing that is. Notied the camera man taking a few very close up shots of Bumble B, so glad he got cleaned up and I re aligned his strips. Cant have the legend looking back on TV now can we.

It was time to get ready for the race, all the riders gathered together to get to the start grid. Lots of good lucks and safety talks, picked a number out of a hat which put me pretty close to the back which was fine by me, I didn't want to get in the way of the hardcore racers as I was in for the fun of it.

Short video of the start of the race and you can see what a great start I got. I was pretty surprised at how fast I managed it :D

Thanks to James Houston for filming and sending me this :D

Just as I was crossing the start/finish line when I started one rider went straight into the crash barrier and it looked pretty bad, I hope that rider was ok. I think there may have been about 2 crashed in my race but I hope the riders and bikes are ok and where able to ride on.

I have to say while we was racing there was a hell of a lot of encouragement from the crowd cheering all the riders but seemed that me and the legend got a lot more cheers at times. Even more so on the final straights as the crowd where banging on the advising boards and I actually physical feel the sound.

As always I heard, well more like felt my cycling buddies though out the race on different parts of the course cheering me and the legend on, they really do stand out as I know exactly who it is even though I probably got my head down focusing on the race.

The course I feel was more technical than any I had raced before. I noticed that on the corners I would catch up to people pretty fast just cause I took the racing line and didn't slow down on entry so then my exit was much faster. Being central London though there was some major head winds in places which was another thing to battle.

The race was 10 laps and I did about 8 laps before the race finished and riders where asked to slow down and return to the riders area. Not bad for me so I'm ok with that.

Took a little time to recover and then me, Orange and Mark headed out to where some of our LBC friends where hanging out. Found James, Alasdair, Chun-Han, Roger, Sam, Alex and Chris. Lots of hugs and hand shakes and chatted for a good while. Chun-Han had said to be before the start of the race that she had something for me. I had no idea what but I knew it would be something I'd love.

Awww I was really touched by this gift, the power of the Bumble B is strong with everyone that knows us it seems and that hasn't changed at all. :)


It was a good day and enjoyed meeting everyone again. Thanks for all the encouragement, cheers and comments on BBB and my outfit.

Big thanks to Rapha

I've always enjoyed the Nocturne and training begins for next year....

Guess who's back home?

Finally my boy is back home at the HiVE.

His been away far too long and I've truly missed the little guy.

The troublesome top tube hinge is still stiff even though its been changed twice. From what the surgeon (Mechanic Marco) says that the hinge may have slightly bent a little so the pin doesn't just drop though the hole like it should so making it a little stiff to fold. He will be getting a better explanation of whats happened from the high IQ folks at Brompton HQ in the next day or so. 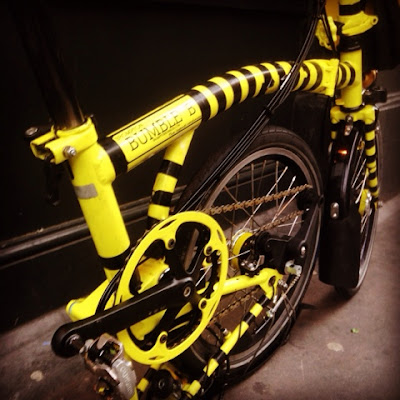 Other than that BBB is pretty much completely overhauled and riding like new. Brompton Junction even gave him a really good clean too which was a nice little surprise. I haven't been looking after and cleaning him as much as I should do the last year or so.

Because BBB is so clean I can see there are a few areas of paint that have come off so Brompton Junction gave me a fresh batch of touch up paint to sort that out when we have the time.

I had a call yesterday afternoon from the head surgeon (mechanic) at  Brompton Junction London.

There was a slight complication with BBB's routine surgery (overhaul) as I was supposed to pick him up that day.

Nothing serious but the head surgeon (mechanic) wanted to keep him in a few more days. Everything went to plan other than the hinge replacement didn't take as well as it should and the surgical team wanted to do it again just to be safe. Which gives me a few more days to get some other bits and bobs ready for his return to the HiVE.

So in the mean time I'm riding red "Loaner" Trust me its not LEGENDARY!!

Red is a S6L and its the first time I've ridden a S Type. Finding that I'm pushed forward quiet alot and a lot more weight is on my hands and wrists so I'm glad I didn't get a S type back in the day. I will be glad to have BBB back thats for sure

Yes folks you heard it here first, the LEGEND will be out racing at the Rapha Nocturne London Folding Bike Race. The race starts around 17:30 on the 10th June so be there to cheer on the legend's return.