Before the sun had started it's epic journey across the sky on this day a legend will be born....

There where rumours, whisperings about one man and his Brompton.

Woke up at silly o'clock, hell it was still dark outside but I didn't care as it was the day I have been looking forward to for a good few months. Today was the Brompton World Championships 2012.

Jumped out of bed and looked over my outfit and thought, "God I have to wear this outfit in public!" but I knew "The sleeper must awaken.....!"

I was so excited I had to force down my bowl of porridge and a banana. I looked up and there The Legend was waiting, quietly knowing that the hours of work and planning was finally coming together. Everything was packed and ready to go so off we went. This would be the first time I had packed so much on Bumble B but I knew he could handle it. At 05:00hrs there where no underground trains so I had to take the night bus to Marble Arch to meet with my travelling & training buddy Mr. O
While on the bus I was excited and nervous at the same time but with my secret weapon packed away out of sight til it was time I settled down.
Finally got to Marble Arch and met up with Mr. O and we set off on our journey.

While we was travelling I got a call from a fellow LBC member who was already at Blenheim Palace. He knew I was going to do the Marathon and BWC Race. He warned me about the Marathon saying there was some pretty big mean hills out there. I said I would think about it and see how it went. His advise would be ringing in my ears a few hours later trust me.
As we got nearer to Blenheim Palace we saw a couple Brompton riders heading in the same direction and ofcourse waved as we drove past.

All registered and got ready for the first event The Brompton Marathon - 26.2 miles which starts off in the palace grounds and heads off into the wilds of the countryside.


The Brompton World Championships  - the big one! A full out race to be the quickest you can over a demanding 8.2 mile course.

I just about got back from the Marathon with just enough time to quickly run to get my full outfit for the BWC itself. Because it was a hot day the event organizers said that for safety reasons riders didn't have to wear their blazers/jackets. No argument from me as it was pretty damn hot but then no one would have gotten the full "Bumble B" effect >:(


In the end because I did the marathon and didn't get too much time to rest up I only got to do 1 lap of the 2 lap race. I was VERY disappointed in myself for not finishing it but I have no one to blame but myself as I was warned off doing the Marathon before hand. Oh well next time I will know.
A few of my fellow LBC buddies where abit worried about me as I probably looked pretty messed up after the marathon and didn't have much time to recover for the main race, but I thought I'd atleast start the race itself and see how I went. I only managed 1 lap which I was really disappointed with >:( more training and no marathons

Somewhere along the way I lost one of the wings from the Bee bell :(


Anyways after the race it was time for something to eat which was included with the racing etc in the Brompton Tent.


All in all a good day out with fellow Brompton riders, met up a whole load of other members from my London Brompton Club as well as getting a few new members too I'm guessing. But all good things must come to an end.....

Mr.O and myself returned back to London after a hard day cycling. As ever its always good to go cycling with my buddy but I really need to push up my fitness level much higher.

There was a photographic booth thing next to the Brompton Tent and as I was walking past the photographer said " I've been looking for you, I've been told to make sure I take photos of the Bee Man!" I just about got dragged into the booth for him to take a few shots.

Now here is the FULL Bumble B effect: 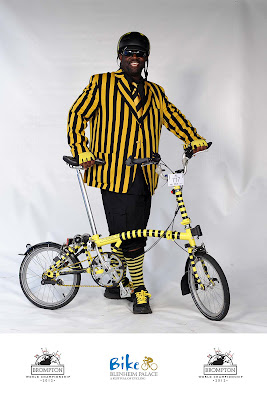