Explore your city by getting lost

With this being my last weekend of my holidays I needed to make sure I got out and did something, we great timing my cycling partner, Mr. OrangeBrompton asked me if I was free to go on abit of a cycling adventure. He wanted to do one of the London Brompton Club rides, namely the "Docklands By Dark" but this time in the day time.

I was a little early so watched the London Eye waking up with the workers cleaning the windows of the pods with long poles which looked difficult to manage but they seemed to get the job done pretty good.

My cycling partner soon joined me and as we both downloaded the route into our Garmin's we loaded them up and waited............

Not the Garmins fault but more like "human error" Even then it was a little touch and go as to whether we could actually follow the route. Typical example of "Blind leading the blind"

We finally set off on out little adventure on this glorious day in London, perfect weather for random cycling and photography. For the first time in months I actually brought out my big dSLR which I don't like to do as I really like to take care of my Canon EOS 5D Mark II

Having not used my 5D Mark II for quiet sometime I almost forgot how to use it with all the settings. I made a comment in this to Orange which he also said he was having trouble with the sunshine. What a relief that was, I thought I had completely forgotten how to use my 5D or I had somehow broken it. :D 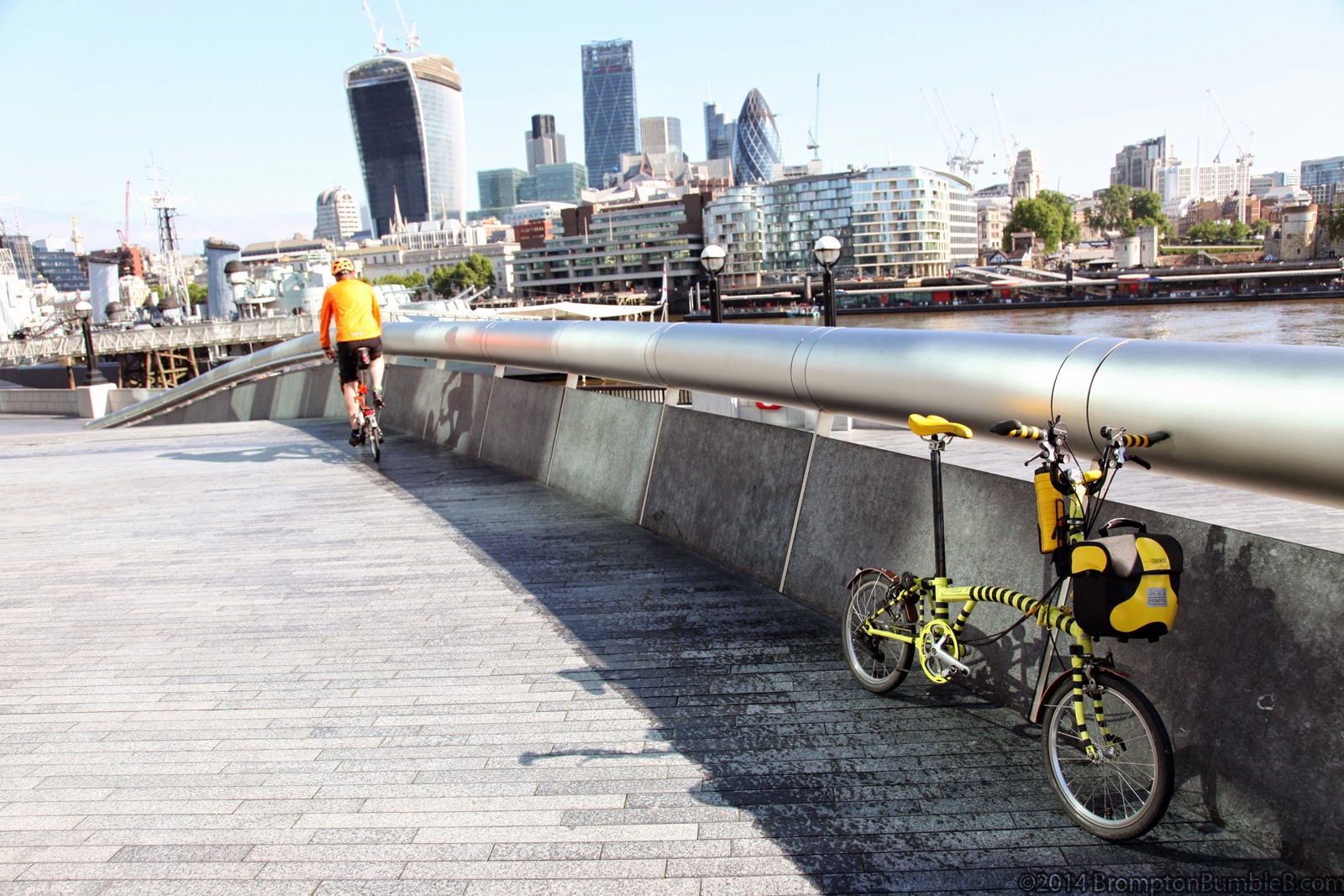 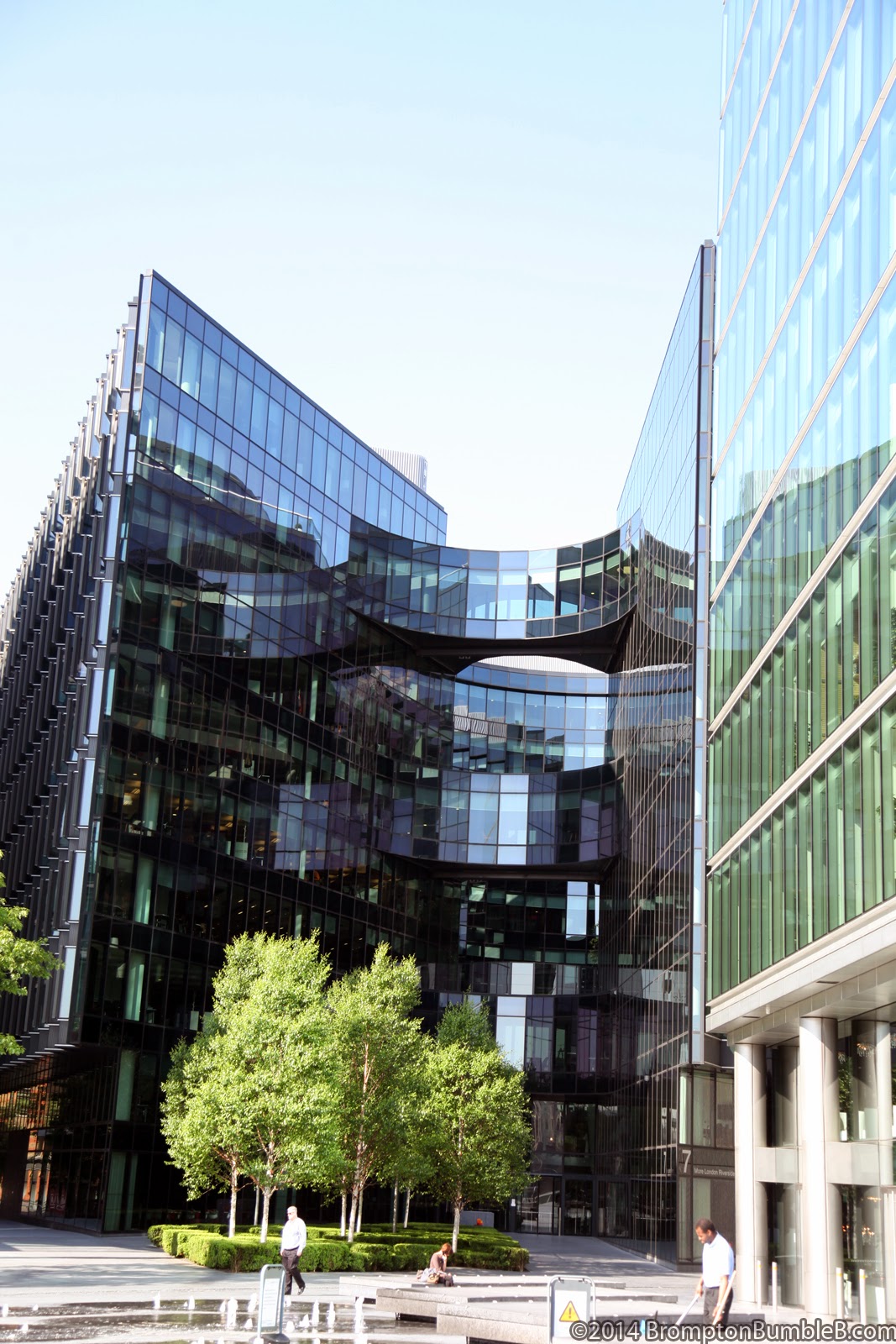 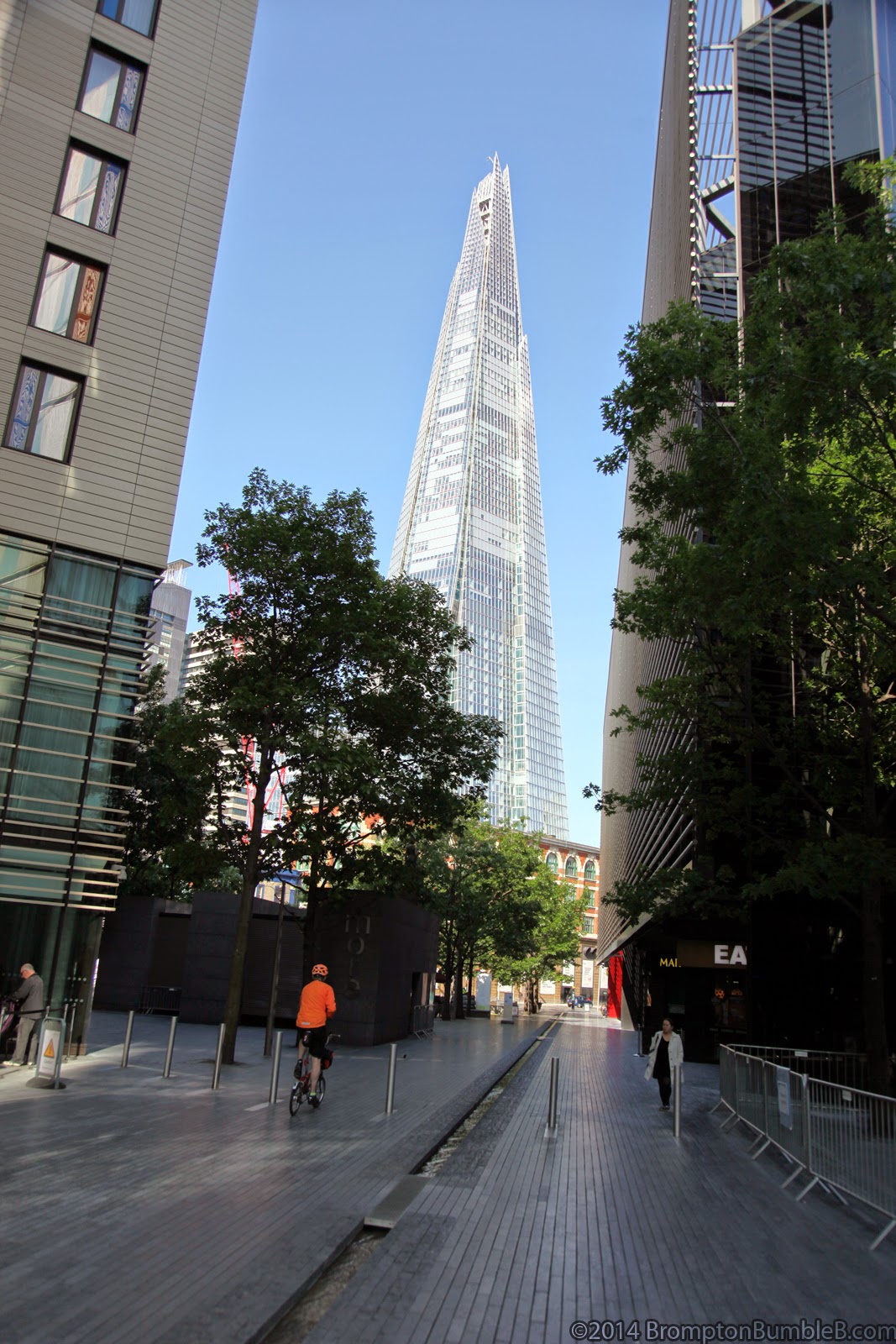 Off now around the dock areas and we came across something we had seen once before on the Thames Bridges Ride earlier this month. 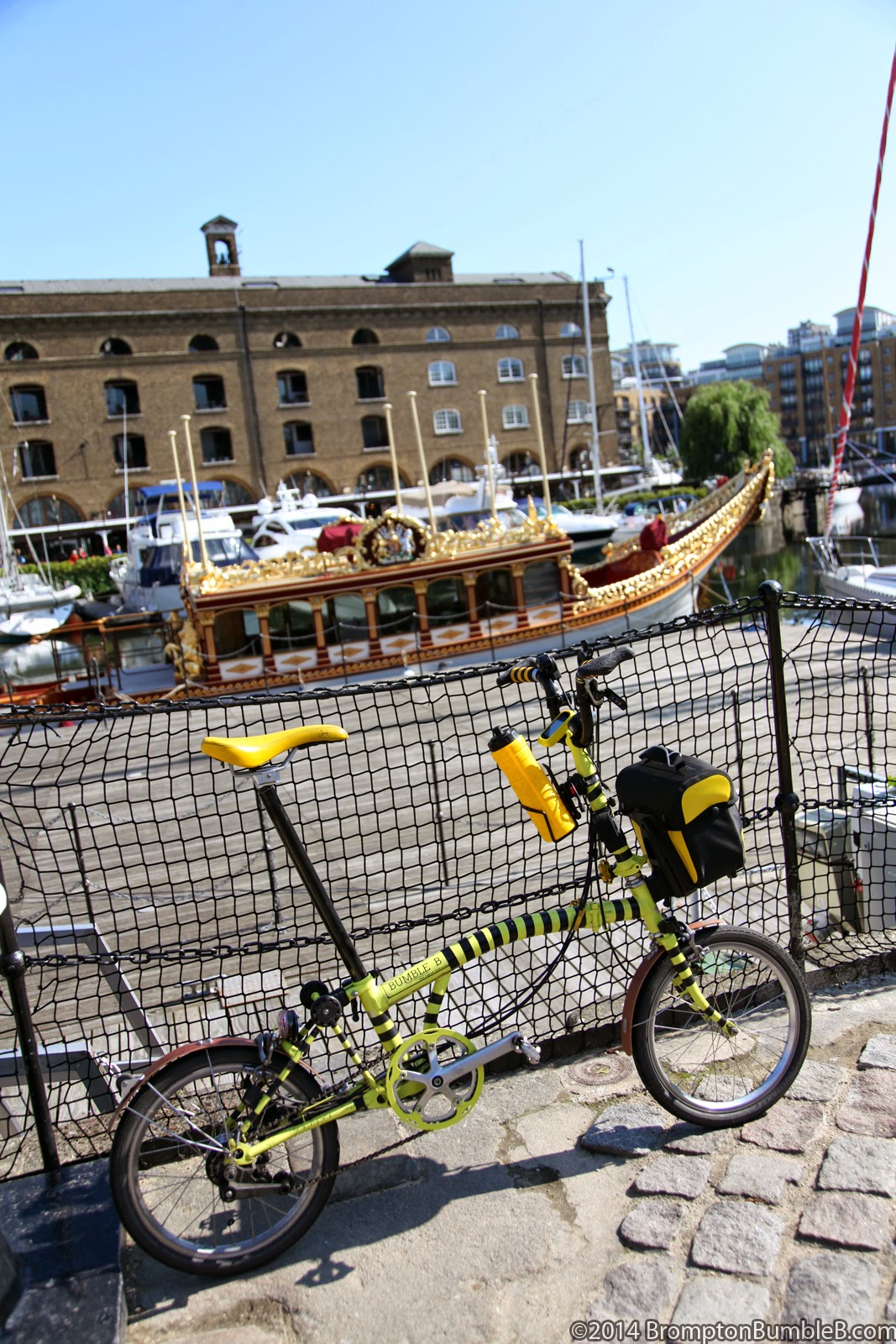 Back onto the Thames River Path we always get a great view of the buildings in the distance, I knew out next big port of call would be Canary Wharf in the distance. 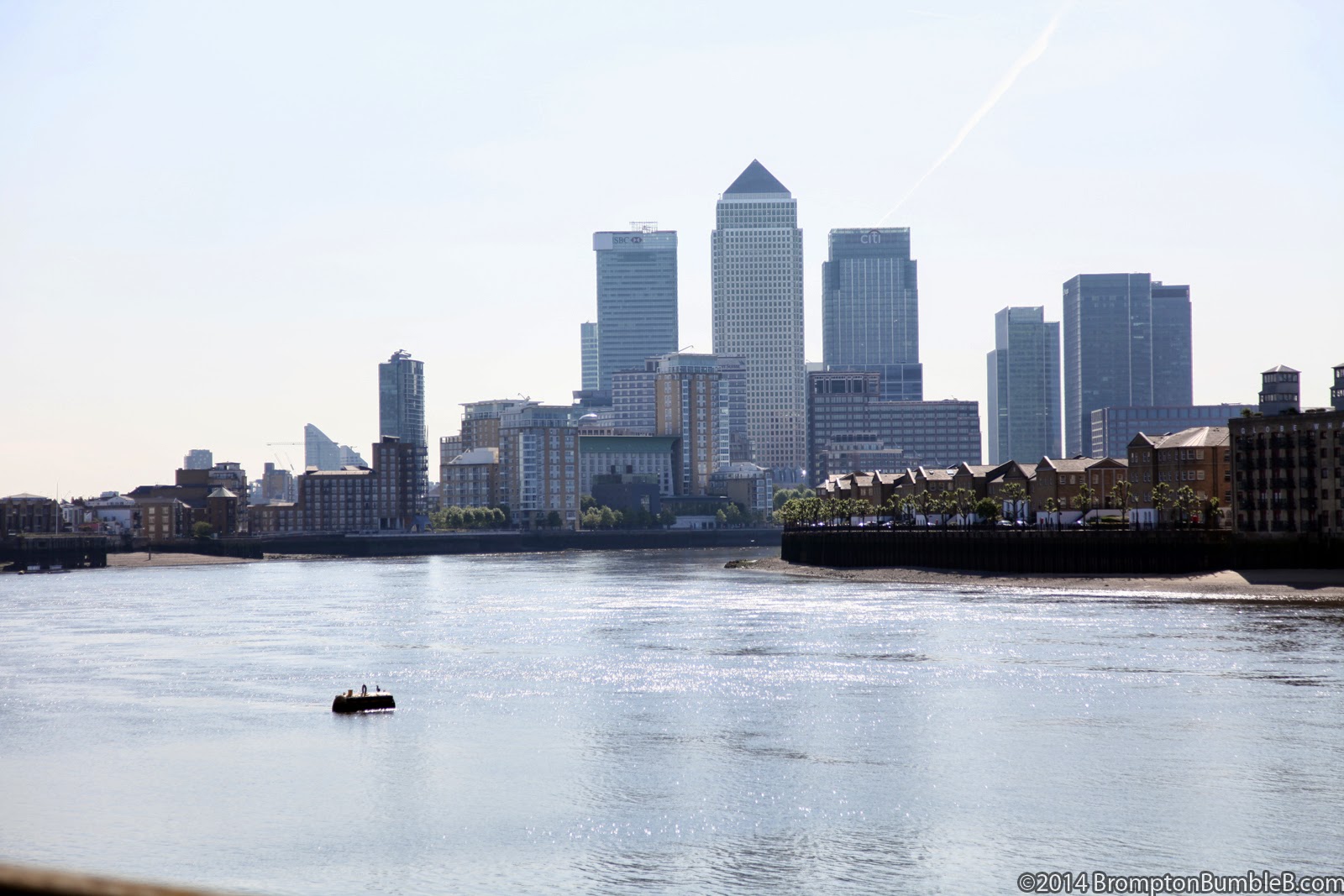 Then suddenly I saw it.

A yellow flash at the corner of my eye.

The one thing I have been dieing to take a photo of for ever since I heard they existed...

Boris bikes have been painted yellow to mark 100 days until the world-famous Tour de France arrives in London back in March.


I quickly tried to fire off a few quick shots incase it got away. I saw the quick preview of it on the screen and wasn't happy. 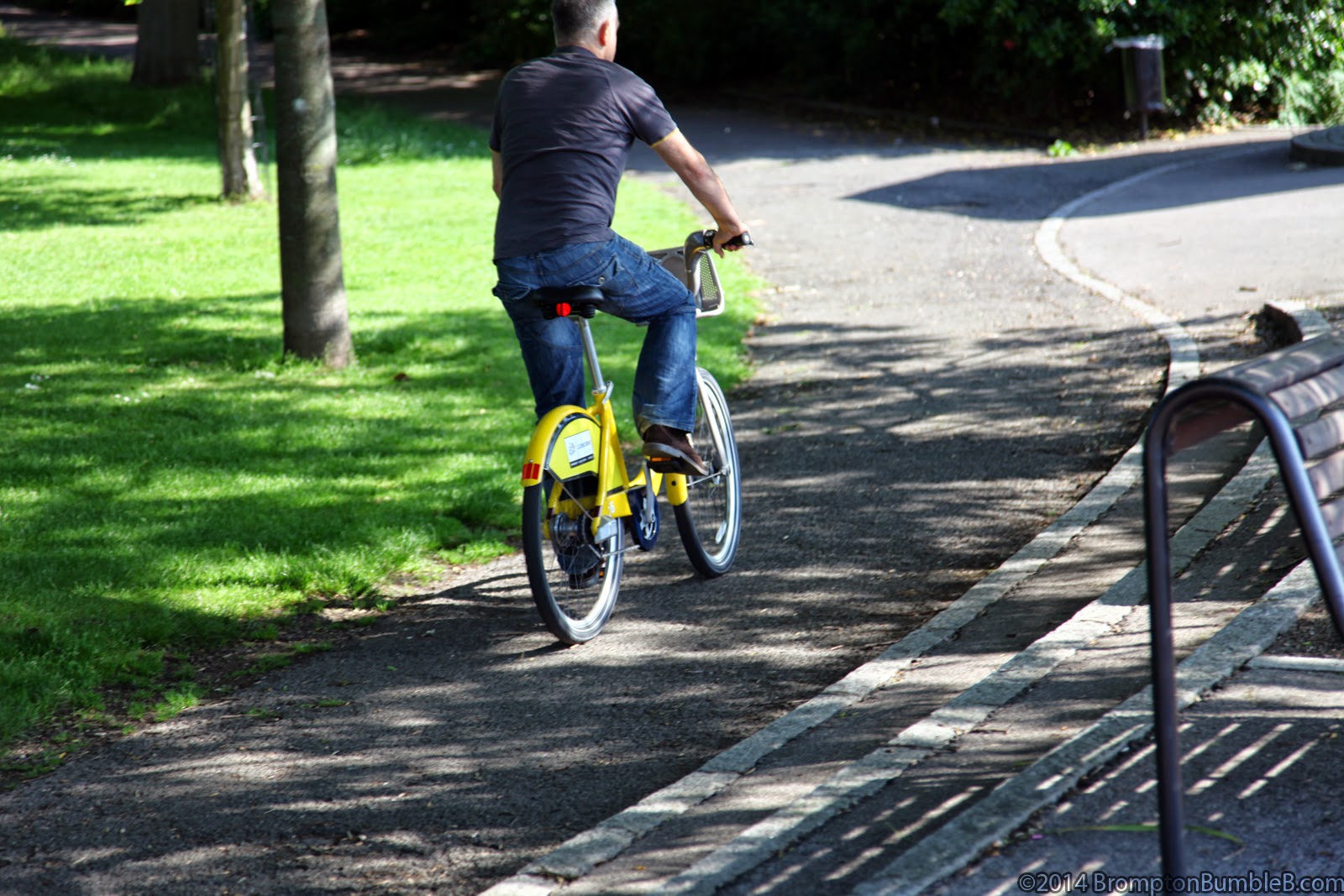 Just like a game hunter on safari I stalked my prey, trying not to spook it, keeping down wind but also getting close enough for a better shot. Finally I saw the rider getting off the bike to take a photograph of the bike with the background of the Thames skyline I leaped into action. I told the rider how I have been looking for the yellow Boris bikes for quite sometime and asked if I could take a few shots with BBB. Of course he said yes, well he didn't really have a choice in the matter to be honest I wasto close to my prey to let it slip by.

I didn't want to hold him up too much so didn't get as many or as good a shots as I wanted but its not just getting the prey, the excitement was in the hunt itself. I released my prey so I could begin the hunt another day.

When I did look over to my cycling partner who I almost completely forgot was with me about I could see a mild bemusement on his face. Yes I do have a thing for yellow just as he has a thing for orange, we understood.

Now was on our return leg towards Docklands and Canary Wharf  areas, we did get a little lost as the routes kinda got confused (well that's my story and I'm sticking to it) but between us we kinda got to where we was going by remembering landmarks we had pasted on previous rides in the area. 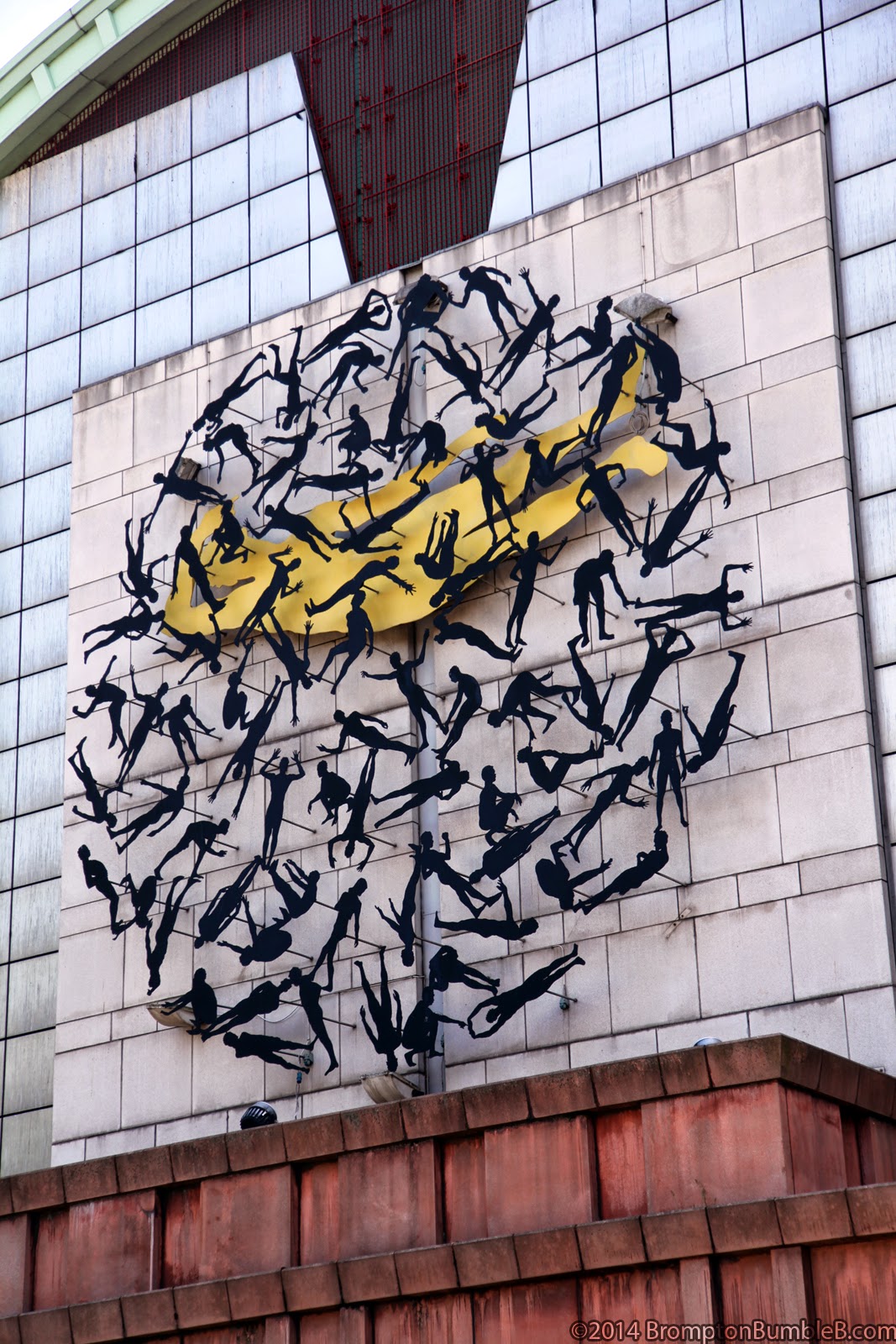 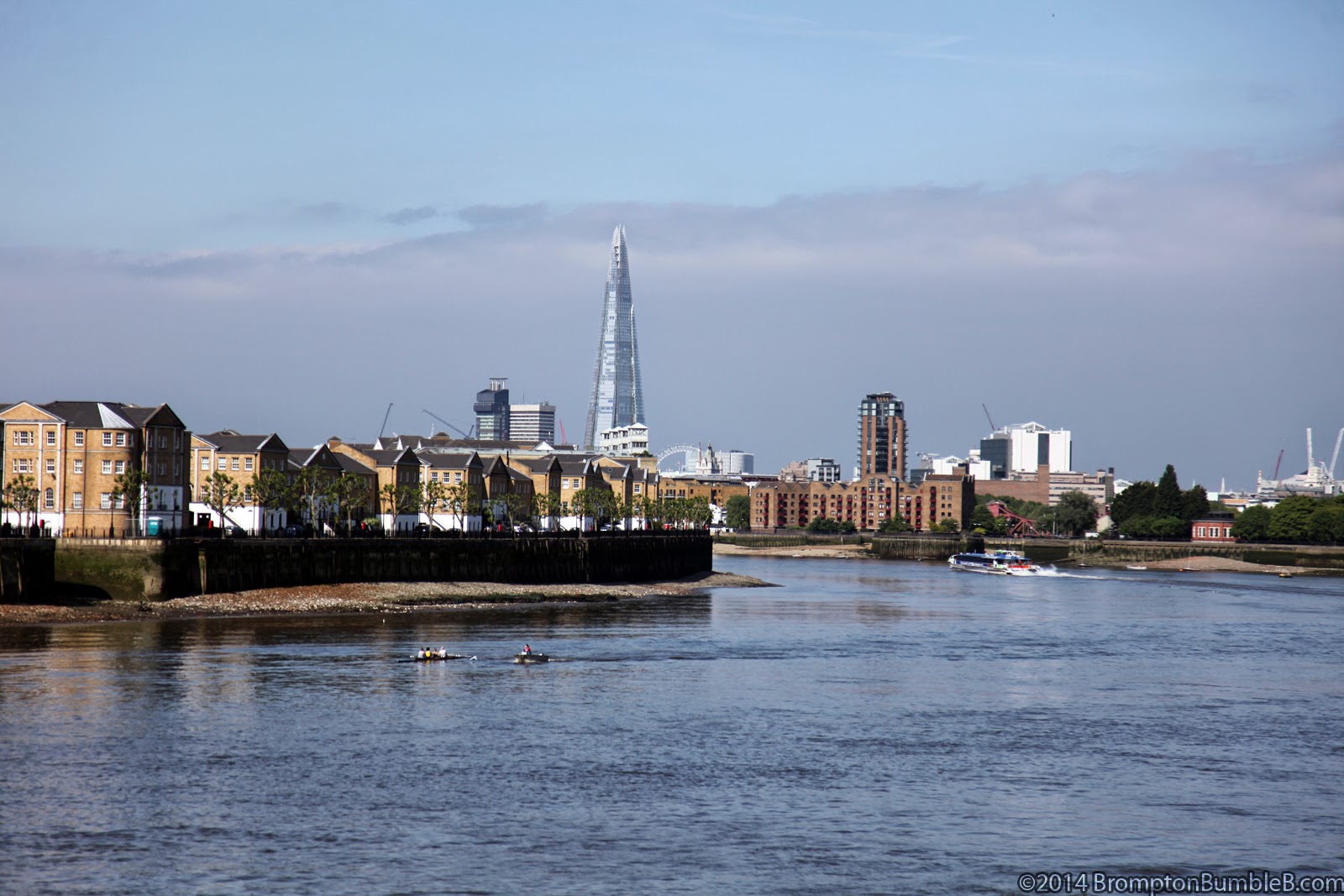 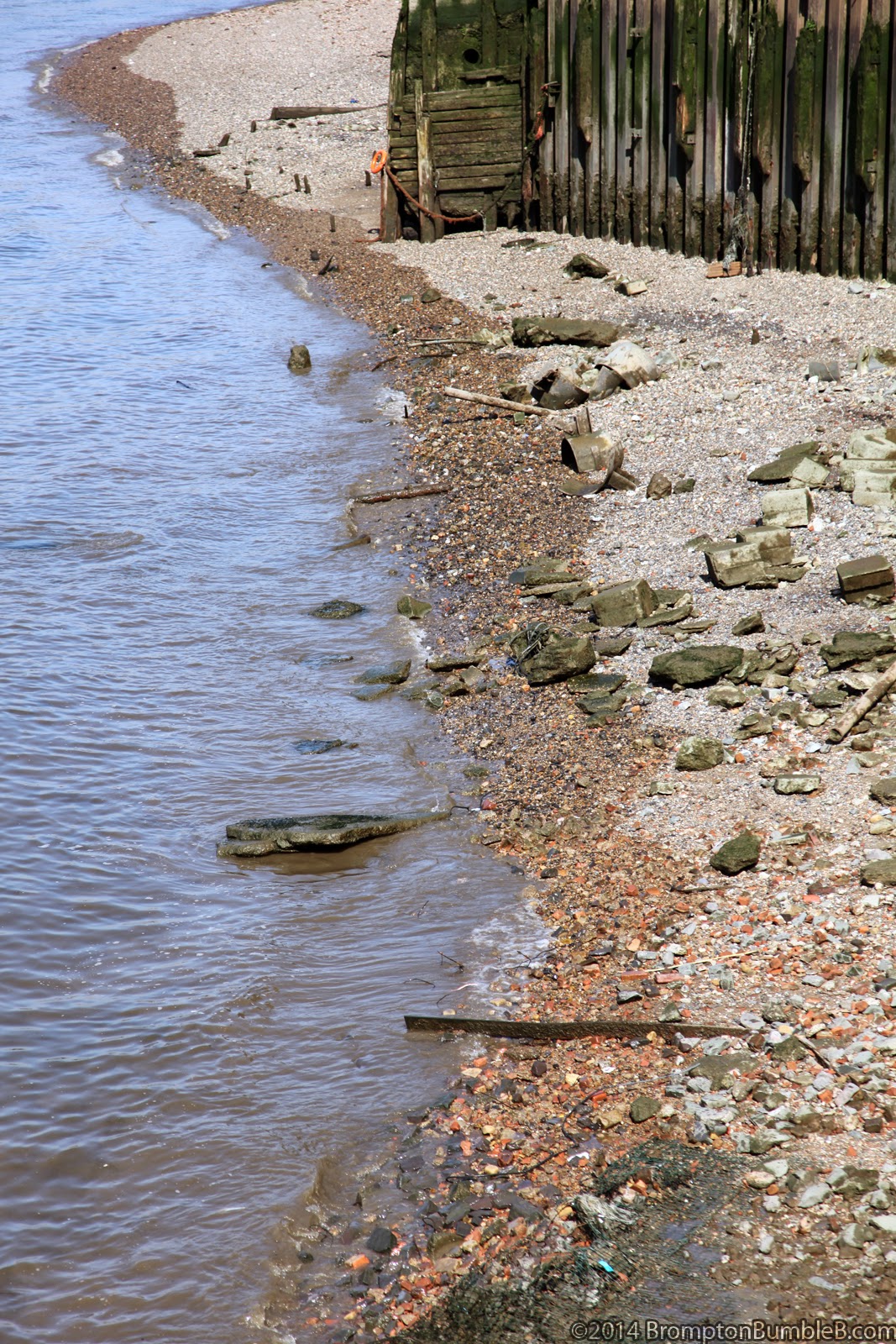 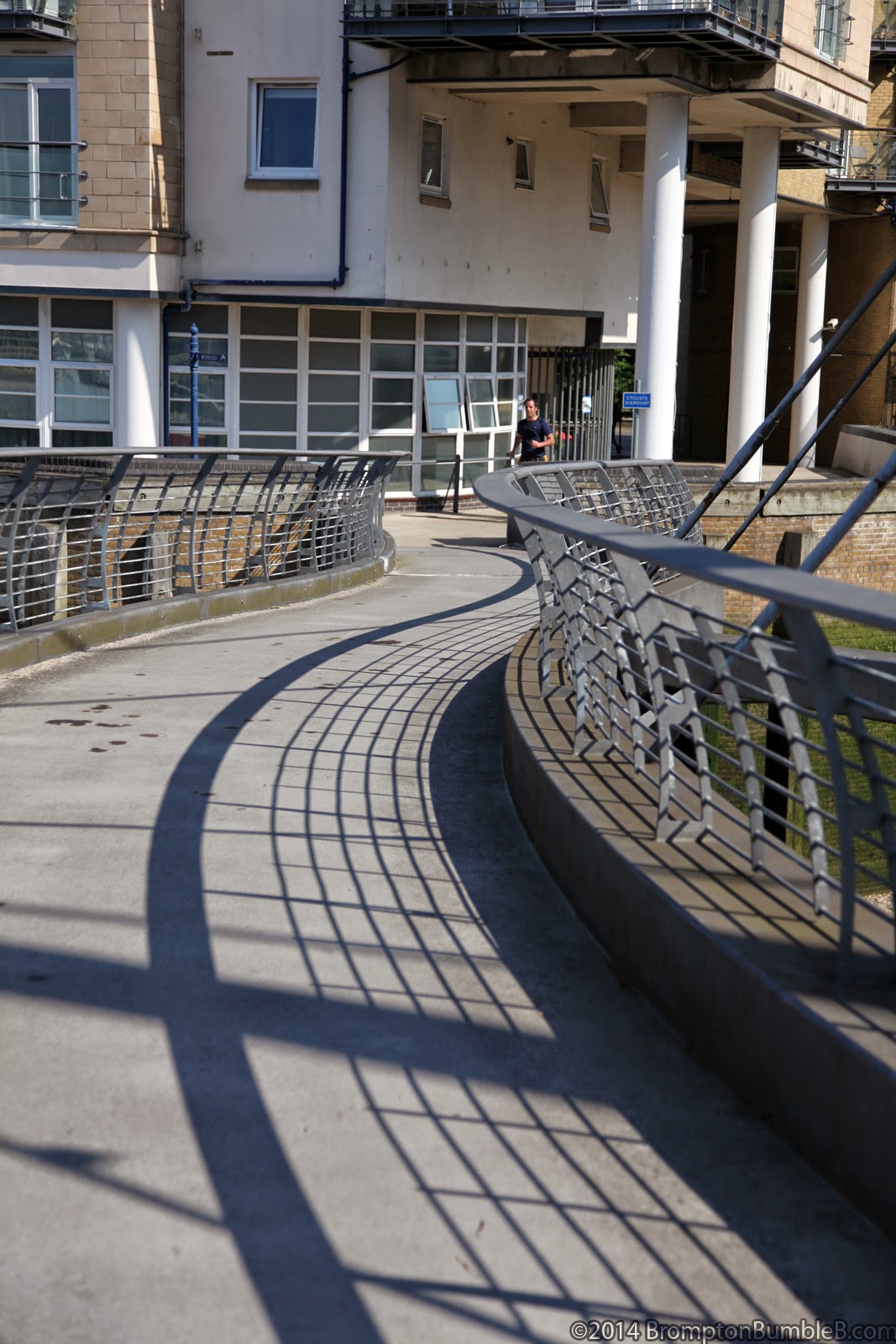 As we started to head into the Canary Wharf part of Docklands I noticed more signs about cycling events  happening in docklands. One which I have actually seen a couple of times on tv, Tour Series Round 8 will be in docklands Canary Wharf area on the 8th June. 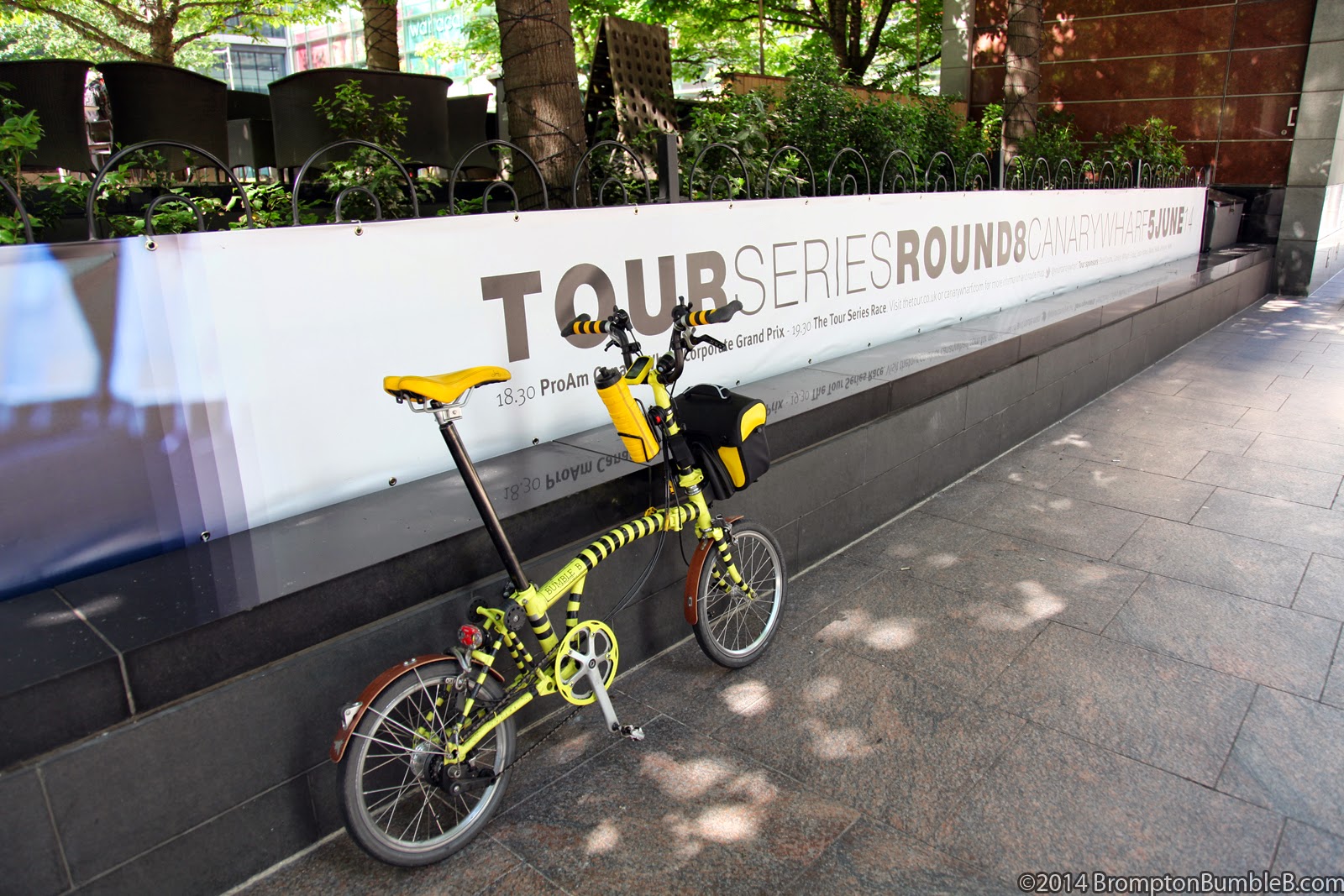 We noticed that there was quite a number of naval ships docked. I think we counted atleast 2 docked naval vessels, they looked like they where actually "active" vessels to. 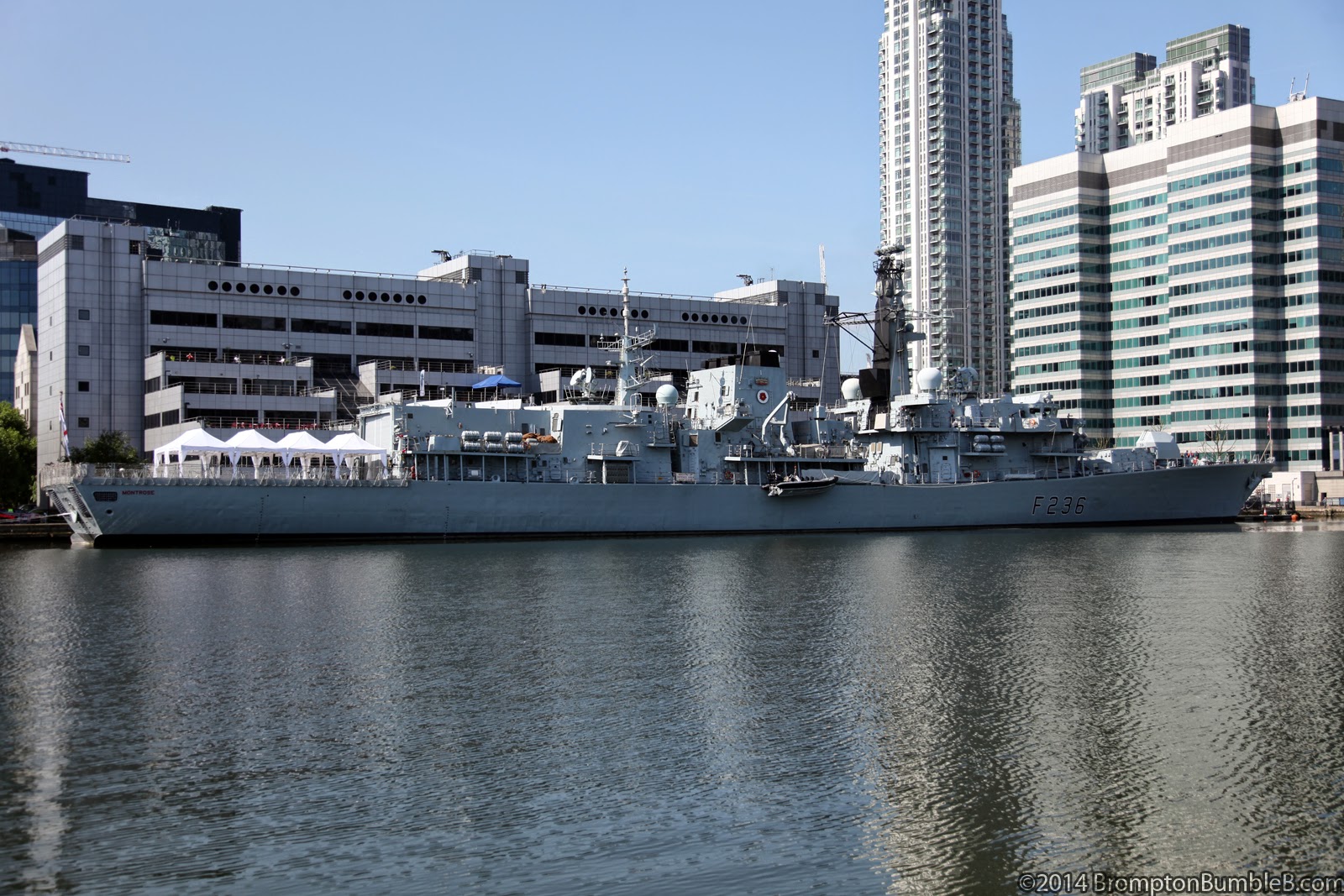 Being in the Canary Wharf area our Garmins had a hard time getting a good gps signal because of the tall buildings but I knew the next point was the Greenwich foot tunnel so we made out way to the entrance and made out way though. 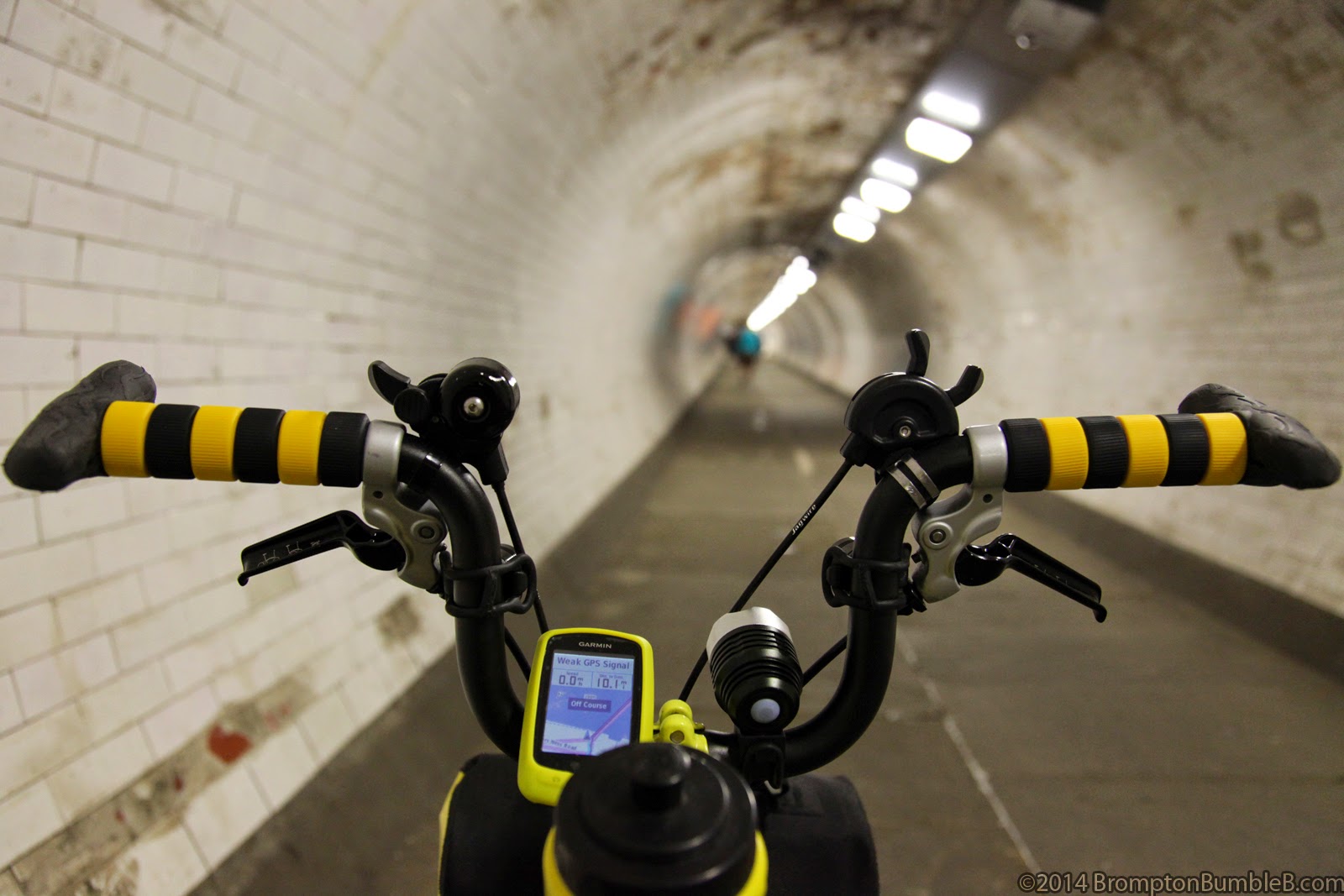 At the other end Orange took the stairs & I took the lift, I wasn't surprised that he got there before me but as I emerged from the exit and looked for him I could see that a couple of tourist had cornered hi and was asking about his Brompton ofcourse. No matter where we go someone always asks about Brompton bikes. 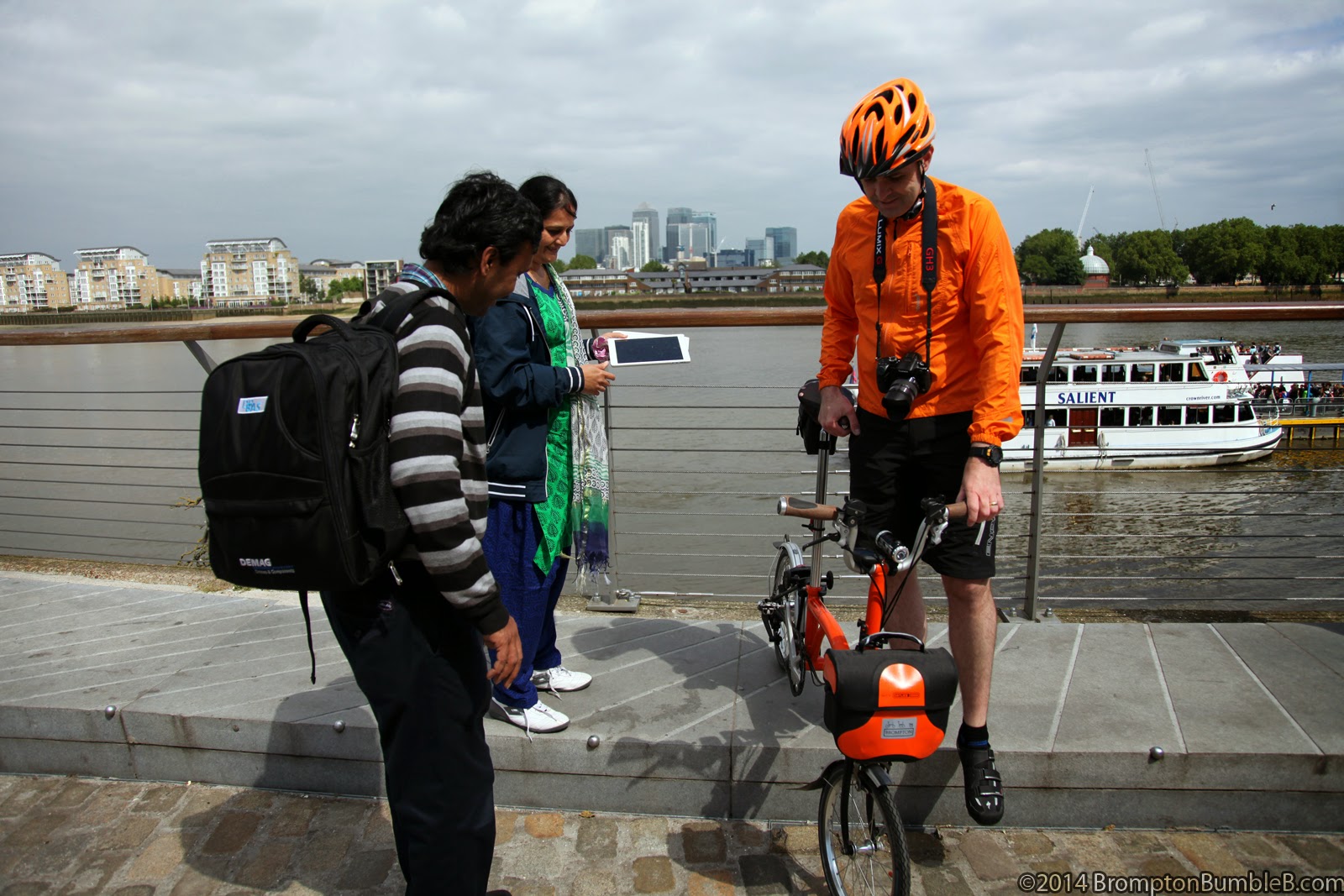 I could see he was in full flow so waited, they even took a photo of him and his pride and joy.

Now next up was Greenwich which I have been looking forward to. Greenwich Park has a pretty steep hill on the outside edge on the road called "Croom Hill"
This hill I have had major trouble with before so I was looking forward to see how my new upgrades would work on it. I have to say that as always took my time on hills and I know my cycling partner loves them, so he just cycled up it leaving me for dust. Serious impressive as always but I knew I could do it. I got in the ride gear from the start and just kept my legs "spinning" and kept my cadence in the 80-90 range.
To my amazement I was doing it, I was "spinning" up this damn hill which had cause me great annoyance in past rides. I killed ANOTHER big hill that had beaten me in the past. I couldn't help but smile once I got over the to top to see my cycling partner waiting for me but this time not so long. He asked how was it and I said "AWESOME" I didn't even need to rest that much either and we set off again. 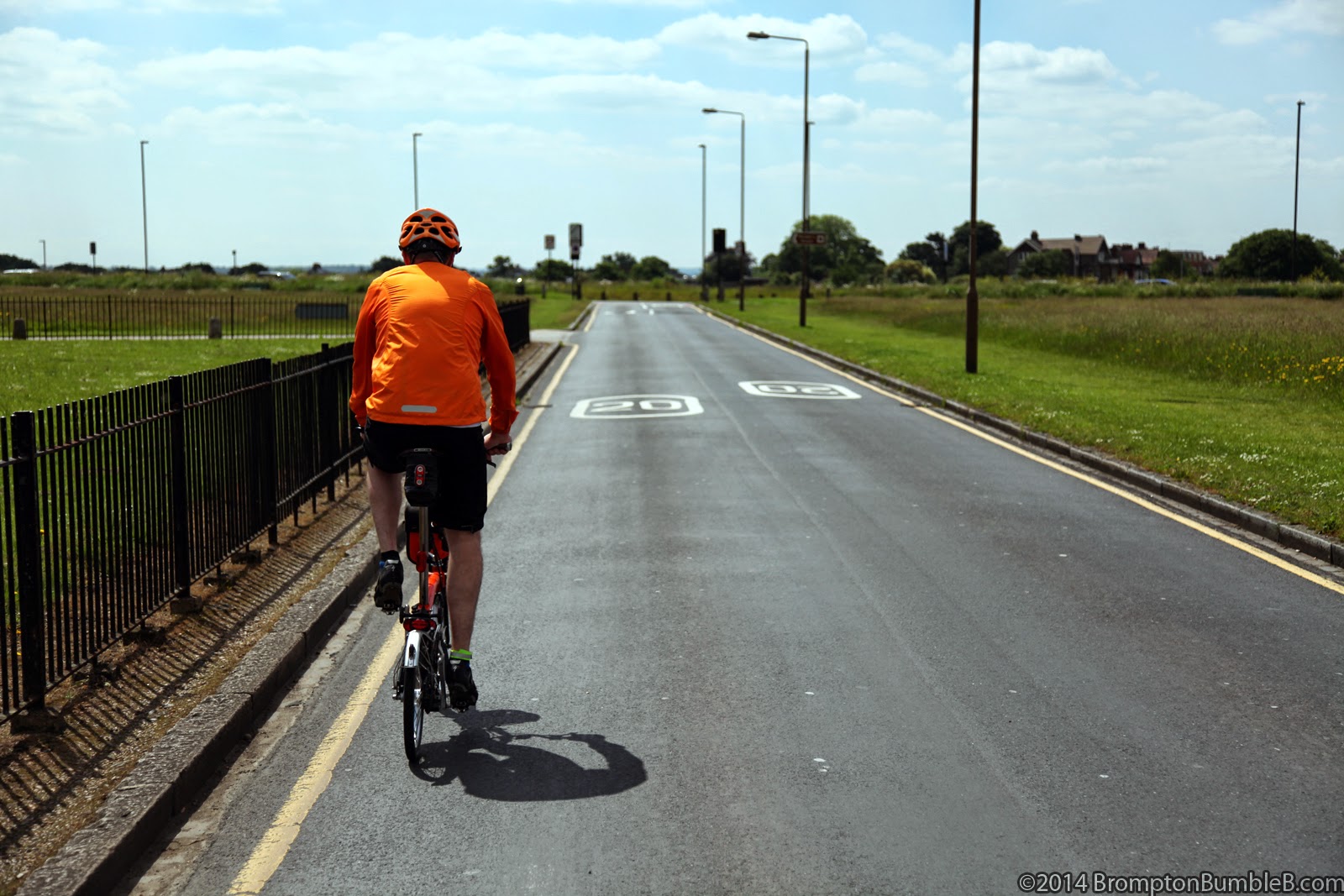 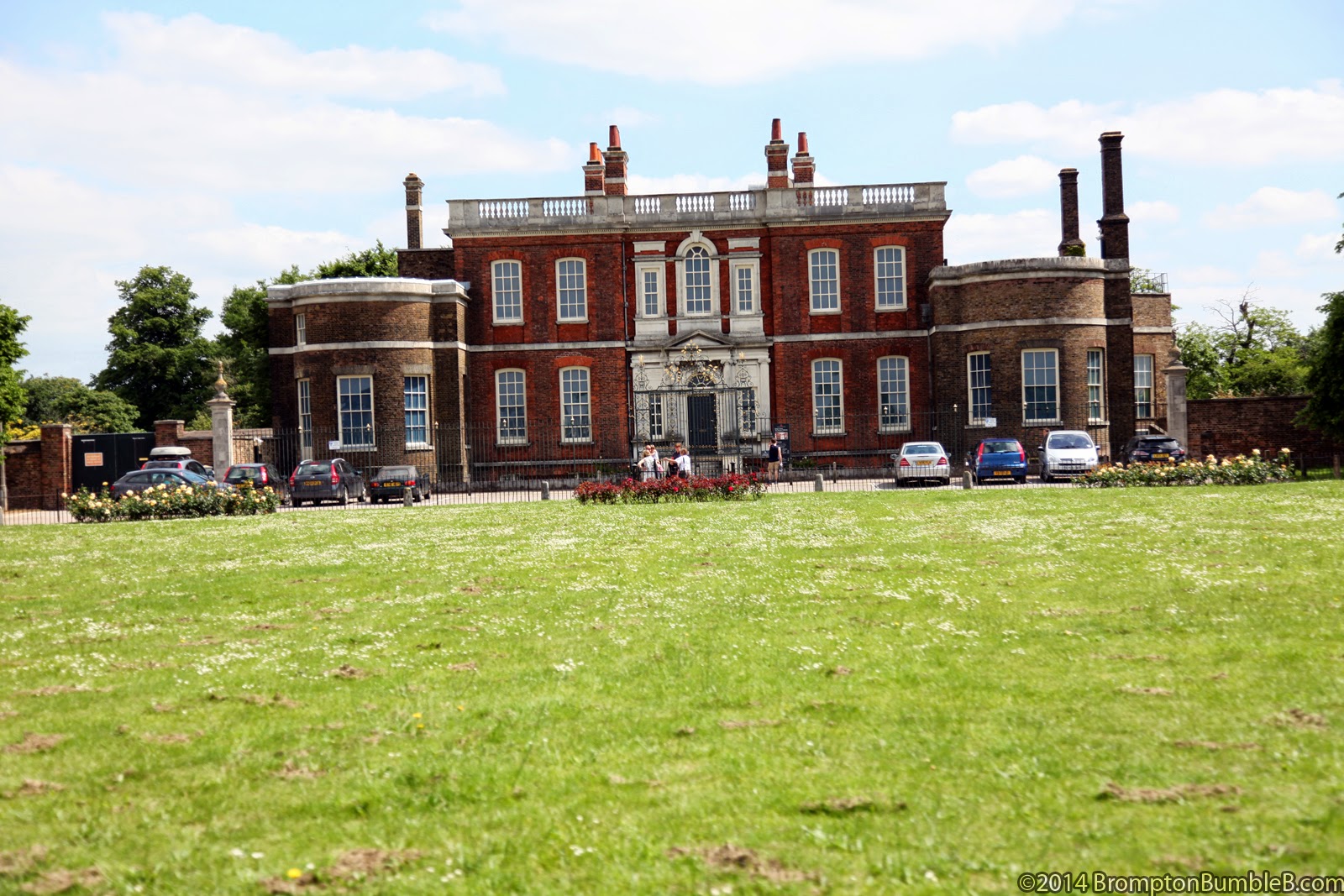 Now we was well and truly on our return leg back to the start point. 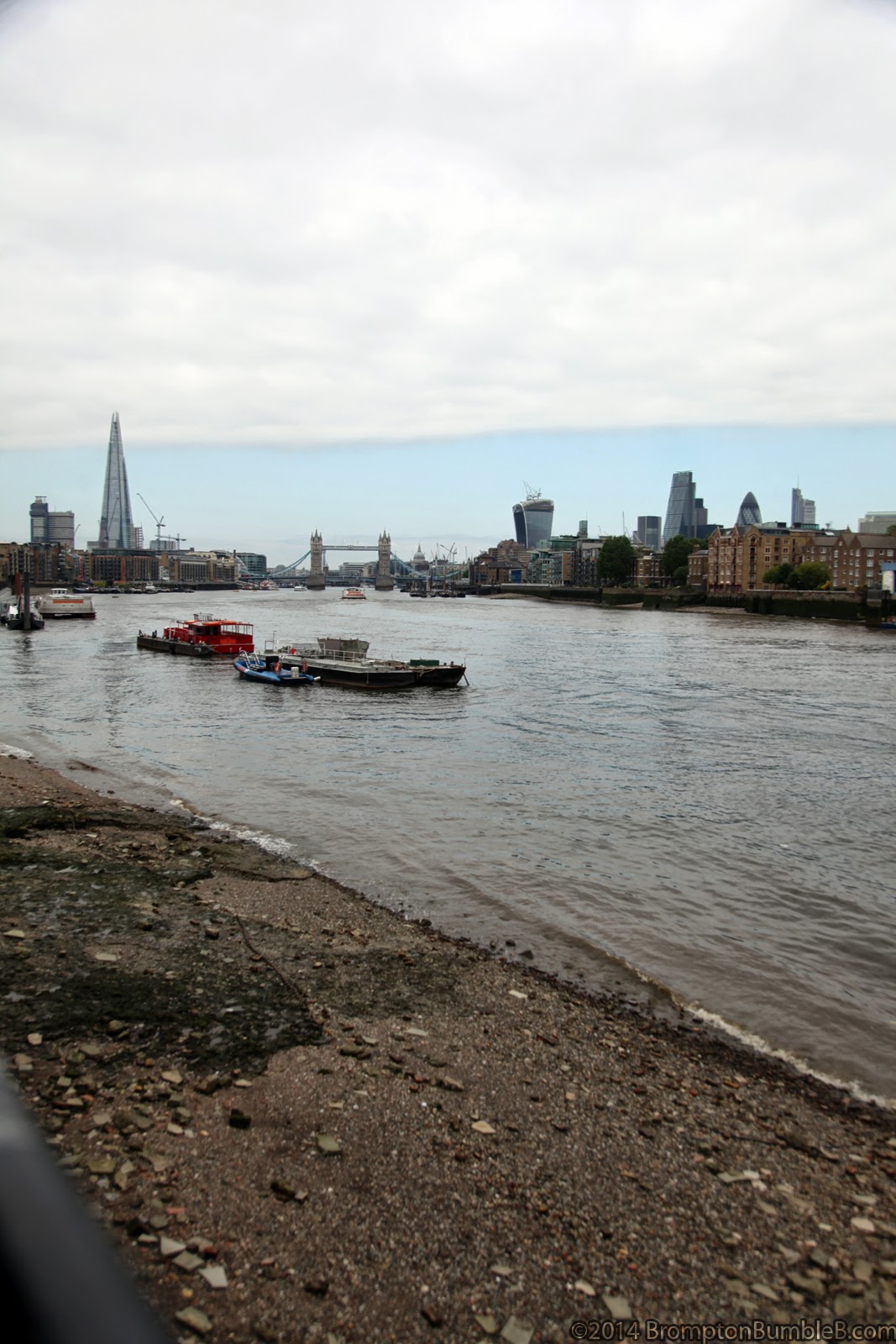 Most of this part was abit of a blur. We cycled on paths we have never been before and even a dead end which cause mush amusement as by that time we was being followed by some walkers and another group of people on bikes. Blind leading the blind again. 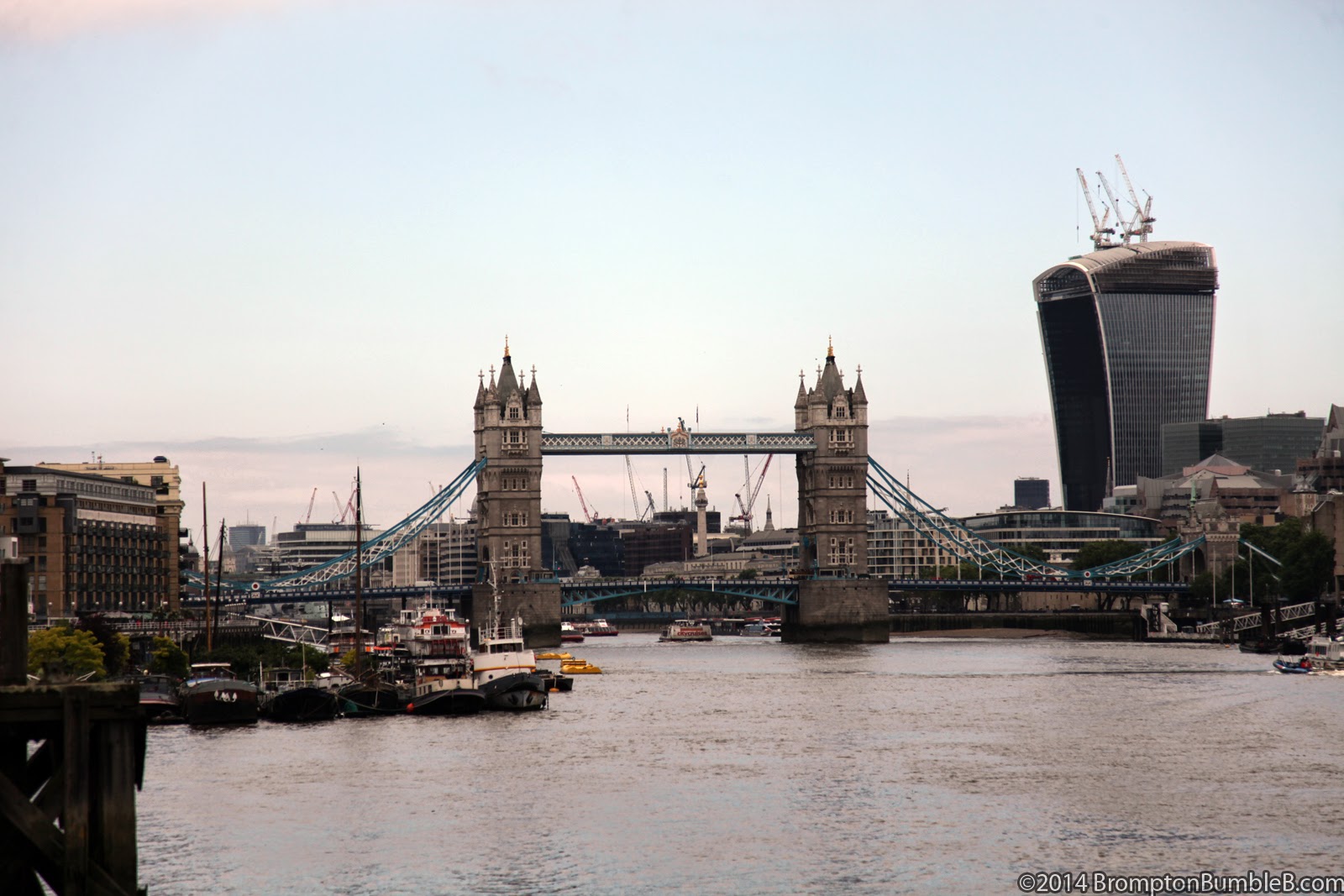 Finally we made got to Tower Bridge which is always a great sight to see. 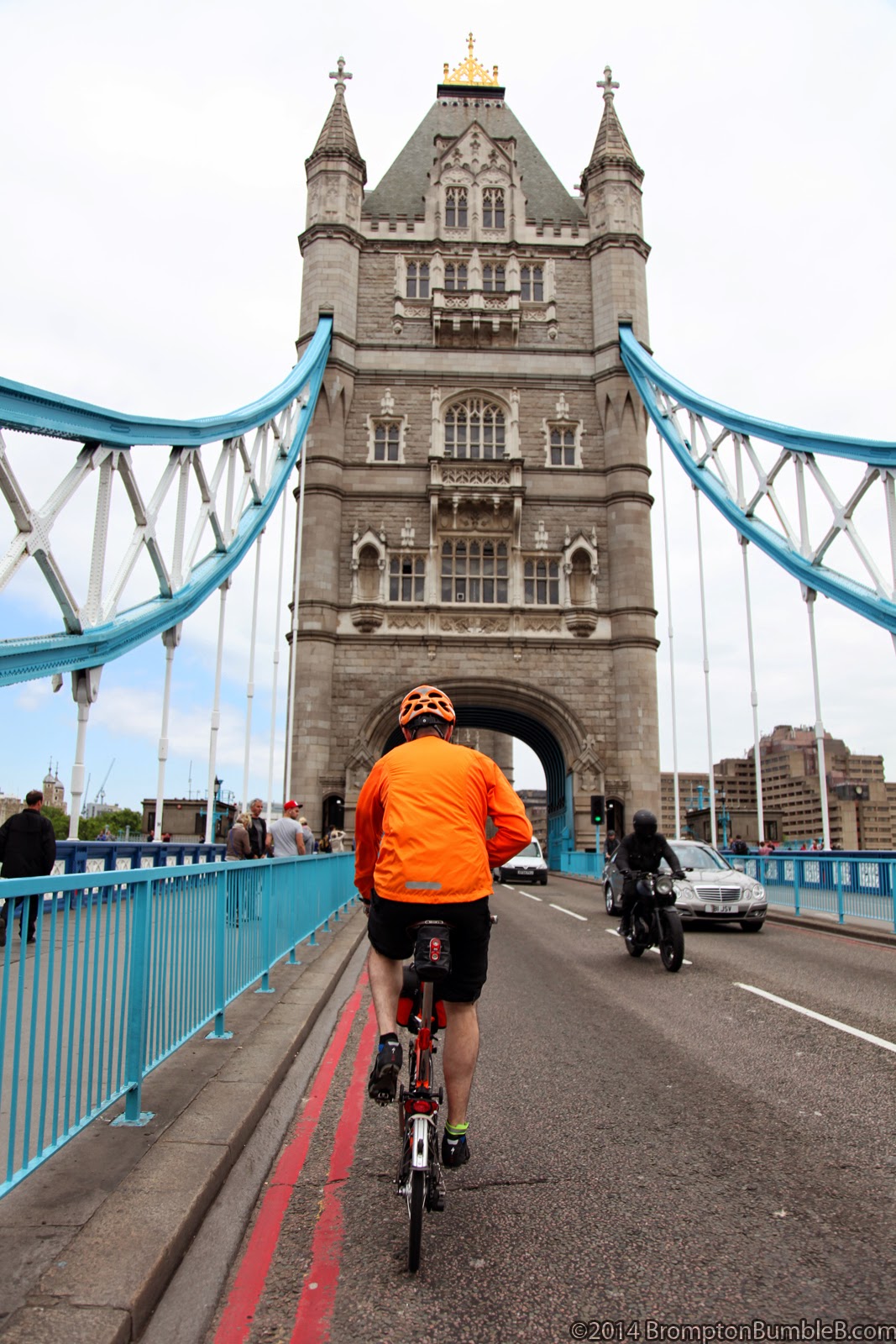 We was pretty close to Smithfields where the London Nocturne will be taking place next weekend so we the chance to have a look round the circuit but before then we felt a little hungry so headed to "Look Mum, No Hands" near Old Street just around the corner. It was pretty busy in there and over heard the staff saying that cooked breakfasts would be atleast 30mins waiting time, We chose to have just a drink and a cake. I had a pretty nice Vanilla milkshake and Chelsea bun. We headed back to Smithfield's and did 3 laps of the course, with traffic and people walking about it was pretty hard to get up to racing speed. Again the short incline felt much easier with the new gearing which I was pleased about. 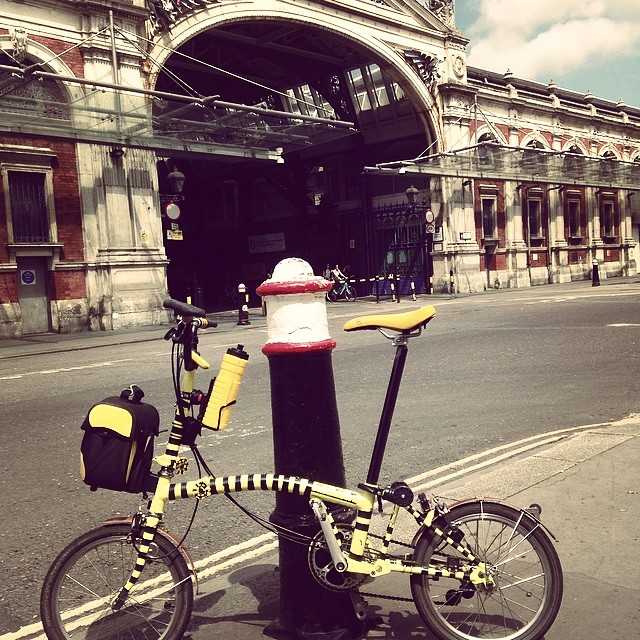 Also saw on the course that there where major CrossRail works in progress and that section of the road narrows pretty sharply. Maybe the works will be finished by next weekend but  the Crossrail works have been going on for a number of years as they update the rail network


As always it was great cycling with my buddy and sharing out love of cycling and photography.

When out on your bicycle I would recommend getting lost in your own city, you never know what you may discover right in your own back yard.

p.s I also upload my data to Strava and I saw that I somehow got a KOM. According to Strava I was doing 191mph on Snow Hill (down) segment somehow. My first ever KOM but I don't think it will last or be official but it did make me laugh pretty hard when I saw my speed. Hope the police don't see it as I could get a big speeding ticket.

Caught speeding on a Brompton doing 191mph :)
Posted by Brompton Bumble B at 22:00