Once again my cycling partner, Mr Orange & I do the double header of the London Nocturne Folding Bike Race & Nightrider London.

We had been to the Nocturne Circuit in Smithfield's Market the week before to get a taste of the circuit on which we will be racing. Since upgrading BBB's chain ring for better hill climbing I was a little worried I wouldn't be as fast but on this tight circuit I didn't need to worry.

We did this last year and it was the first time I had done 2 events so closely together so I knew what to expect.

We met up with a good number of the LBC crew at a coffee shop just outside of the event, Mr.Orange was sporting a really nice orange waist coat & shorts. I have had the idea on getting a yellow waist coat since the heat of Brompton World Championships last year when it was abit of a heatwave and many rides didn't ride with jackets.

Everyone to gathered together to get into the riders area in the market building itself. Preparing our B's, suits and putting on the riders numbers which was abit of a mission. 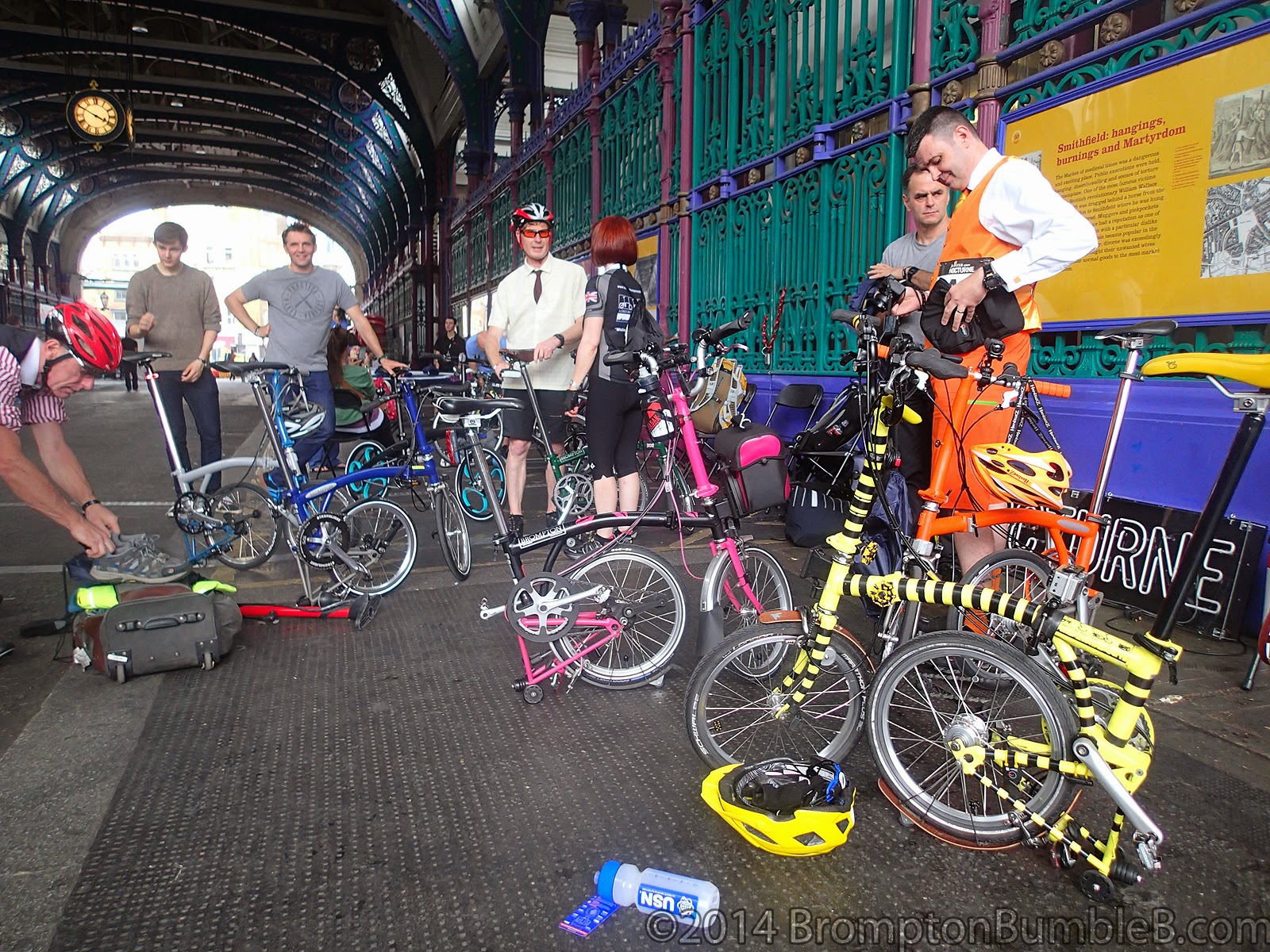 My heat was the first race of the day so. I had almost missed the call as there was alot going on but managed to quickly run to get on the grid. Even after I got there late there was still a few more riders after me running to catch up. 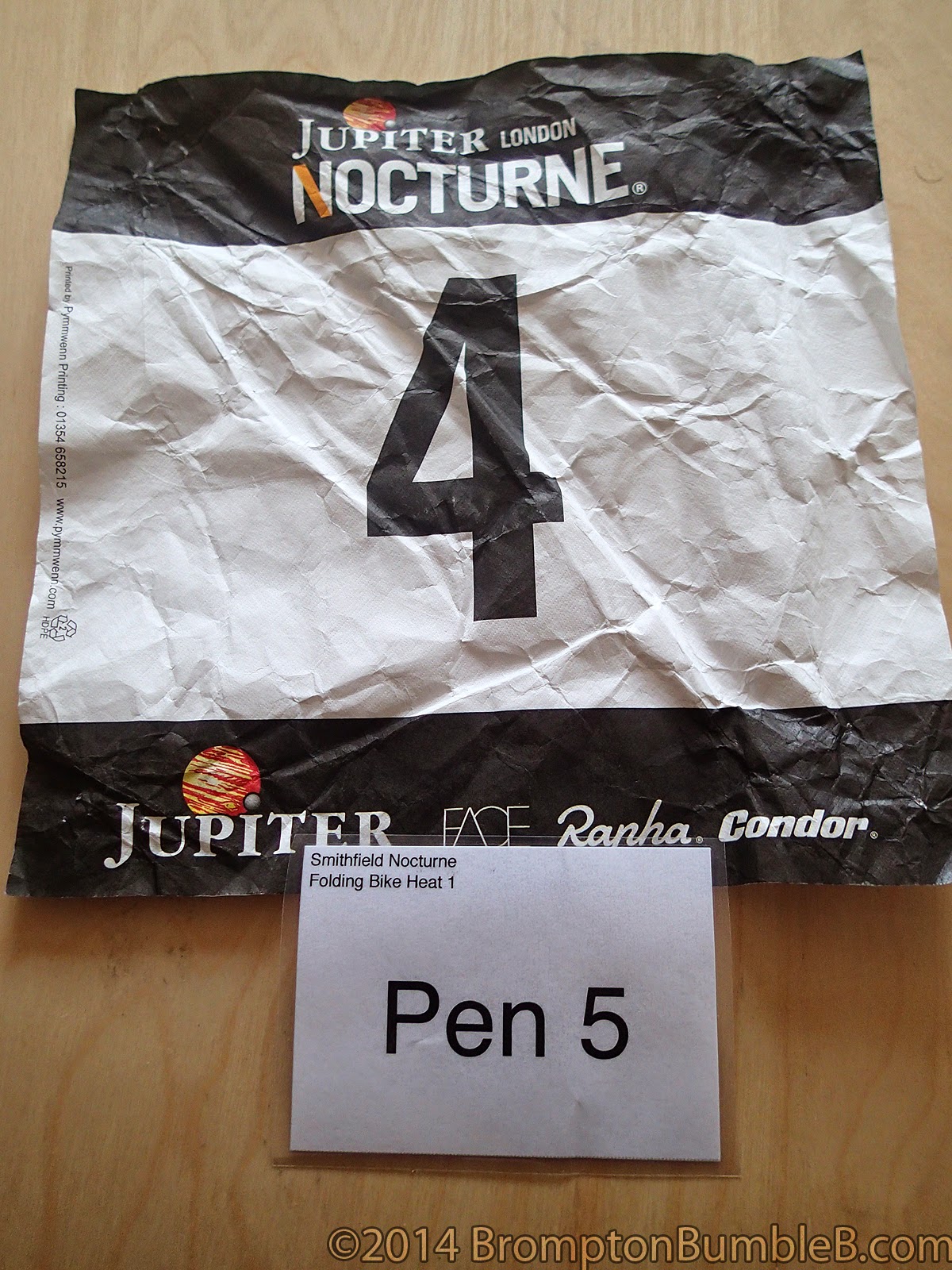 I did have my GoPro mounted and ready to record the race but because it was delayed it timed out and in the rush I didn't start it up again. May look into upgrading to something else in future maybe the Garmin's Virb as I can control it via my Garmin Edge.

Now in the race itself I was just focusing on my own race making sure I did better than last year which I felt I actually did, I pushed a hell of alot more and my body did what it was told. There is a slight incline after a short hairpin corner which last year I had problems with but this year I was up and out of the saddle pushing like hell and really giving it some welly which even surprised me. Clearly the new 44T chainring upgrade is agreeing with me greatly.

Out of 40 riders 31 actually completed I came 27th which I was pretty good as there was quiet a few VERY fast riders in both heats.

After my race I was offered a massage which I just couldn't say no to. I have to say my legs have never felt so good and where so relaxed after that it didn't feel like I did a race.


After my massage with my nice jelly legs I began to relax abit, I brought my number 1 fan with me & had to take a little snap of the little guy. 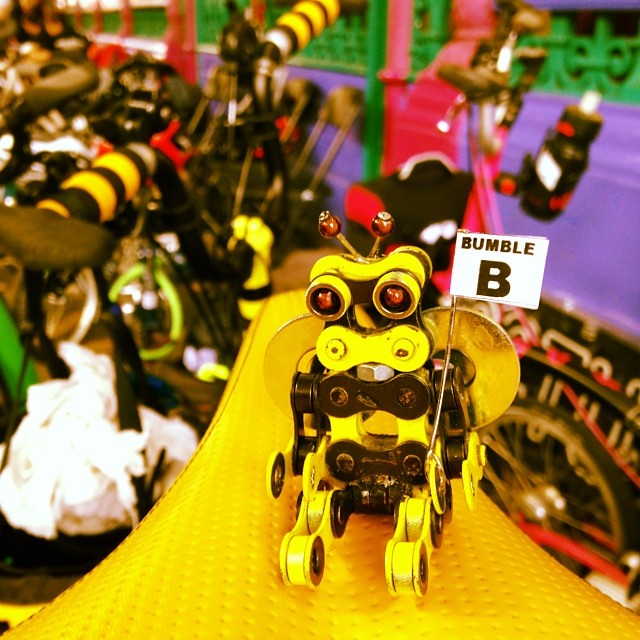 Quite a number of the LBC member's got into the final but that wasn't for a  couple of hrs so most of us decided to go and get something to eat.

After a damn fine lunch we went back to enjoy the rest of the racing. 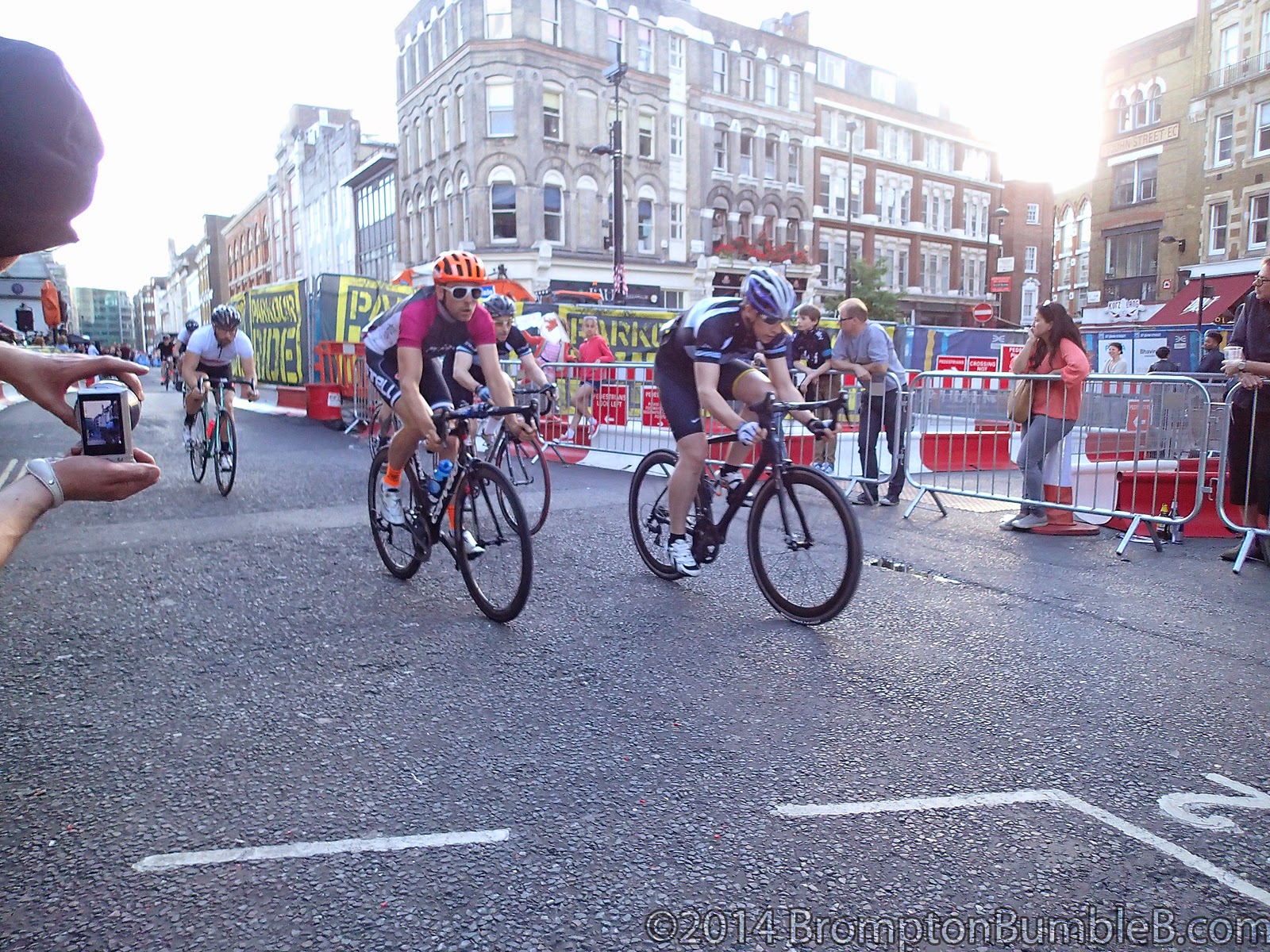 Seeing a Boris bike on rollers is a whole world of wrong. For one thing it takes 2 guys to make sure it doesn't come off as its a little longer as you can see from the photo below the front wheel almost coming off.

Then it was time for the Folding bike race final that alot of the members of the LBC got in on. Seeing these guys is always great, seeing these little Bromptons flying around the track and the crowd just loving the action. 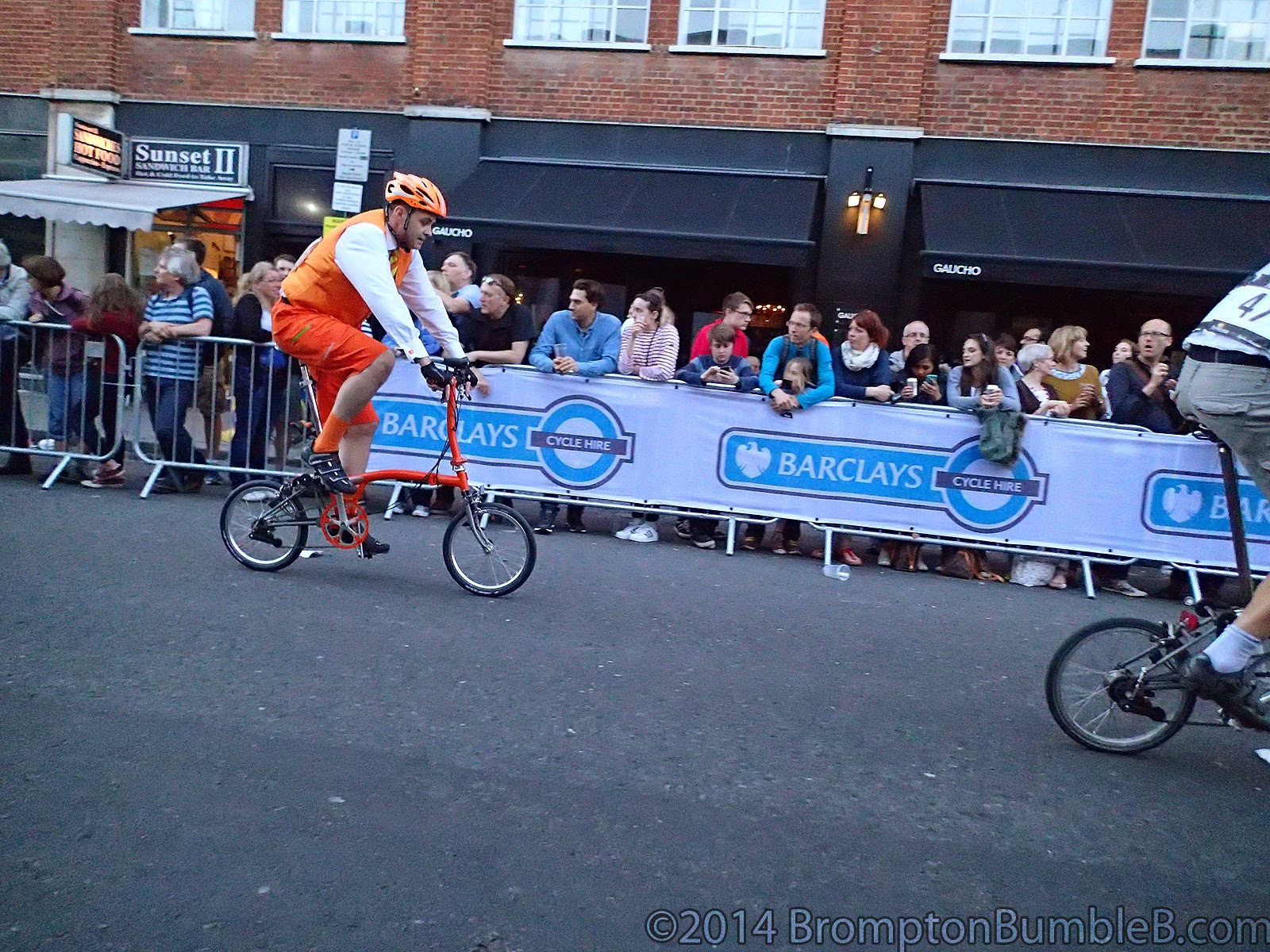 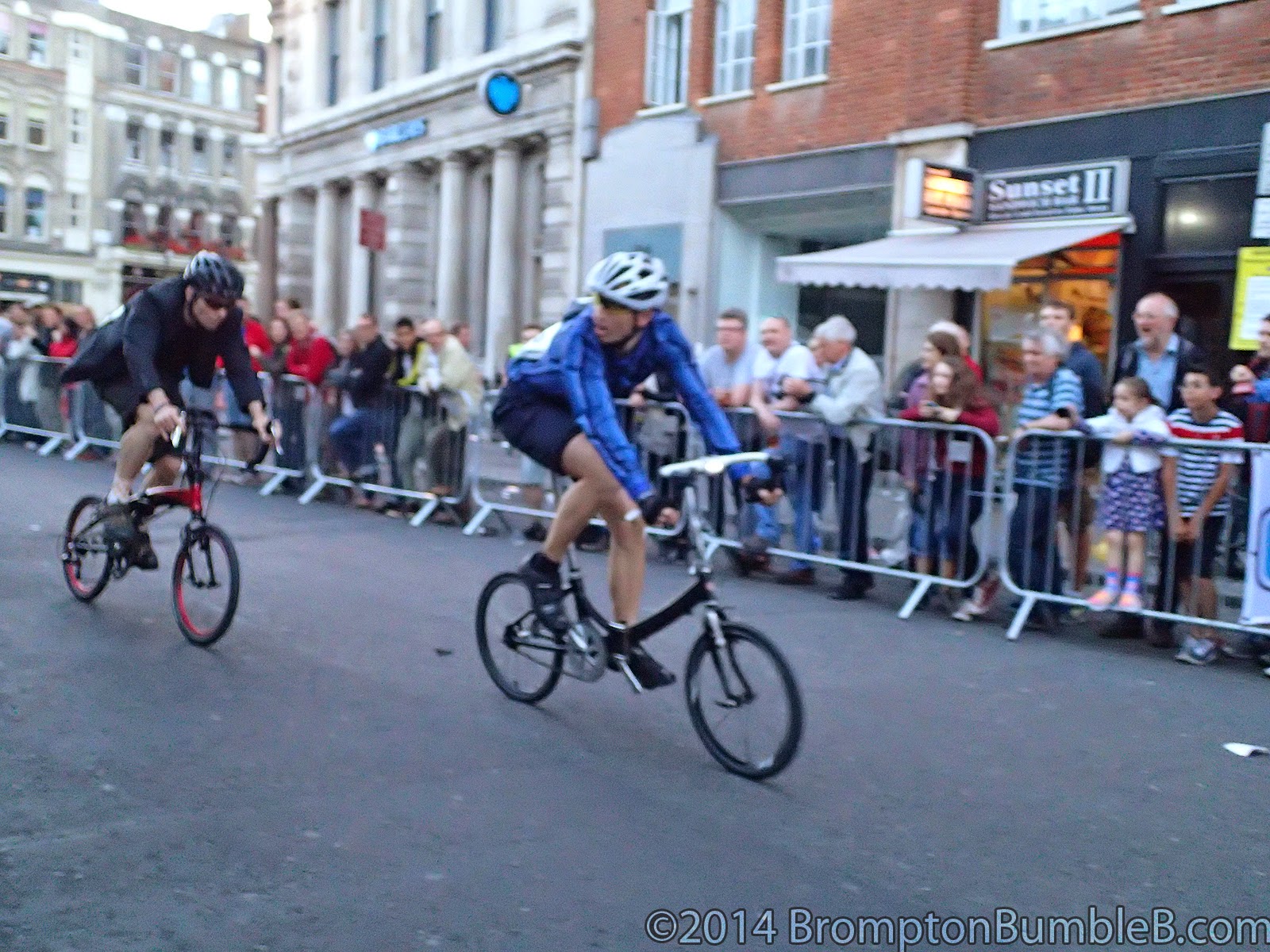 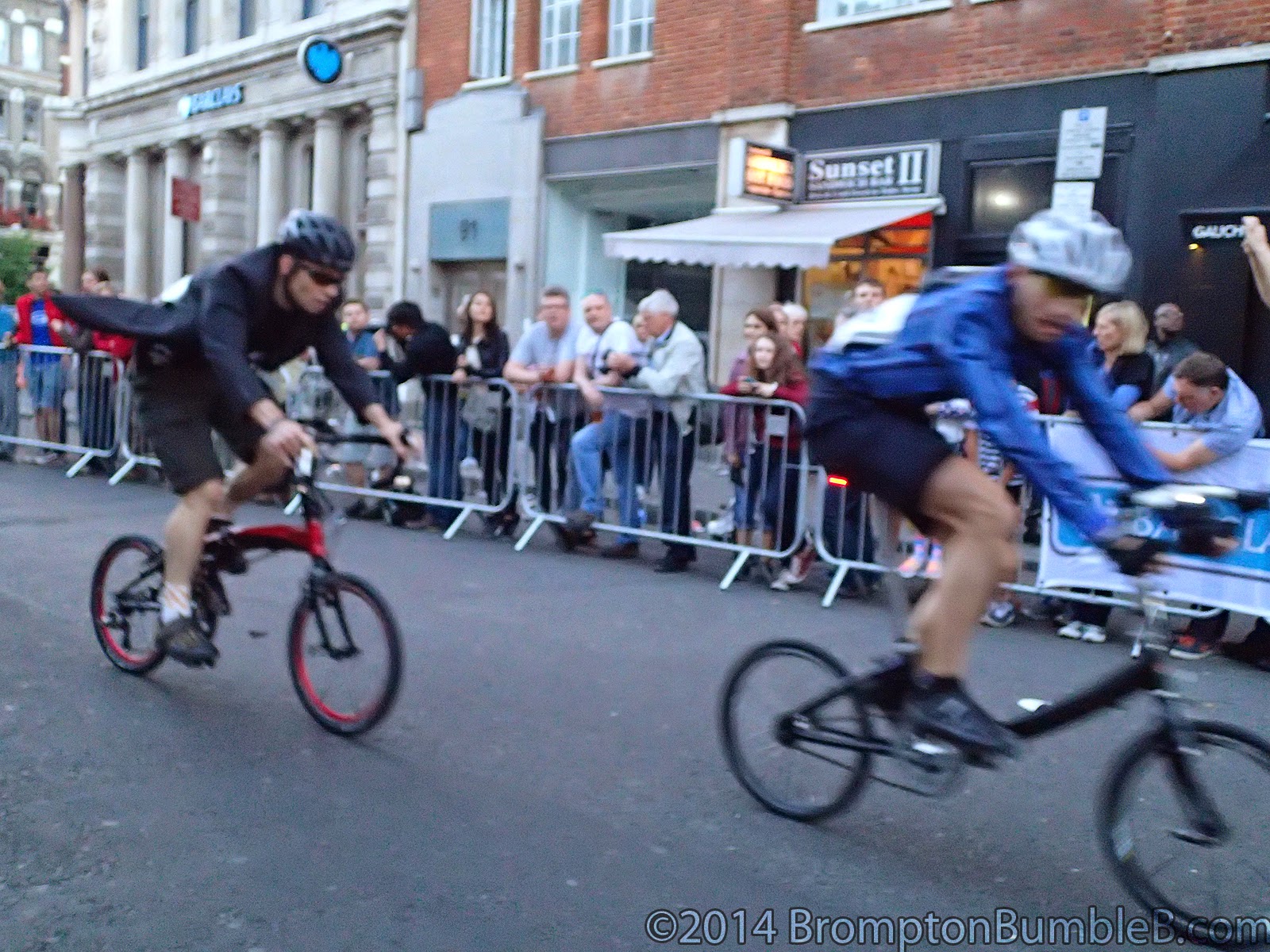 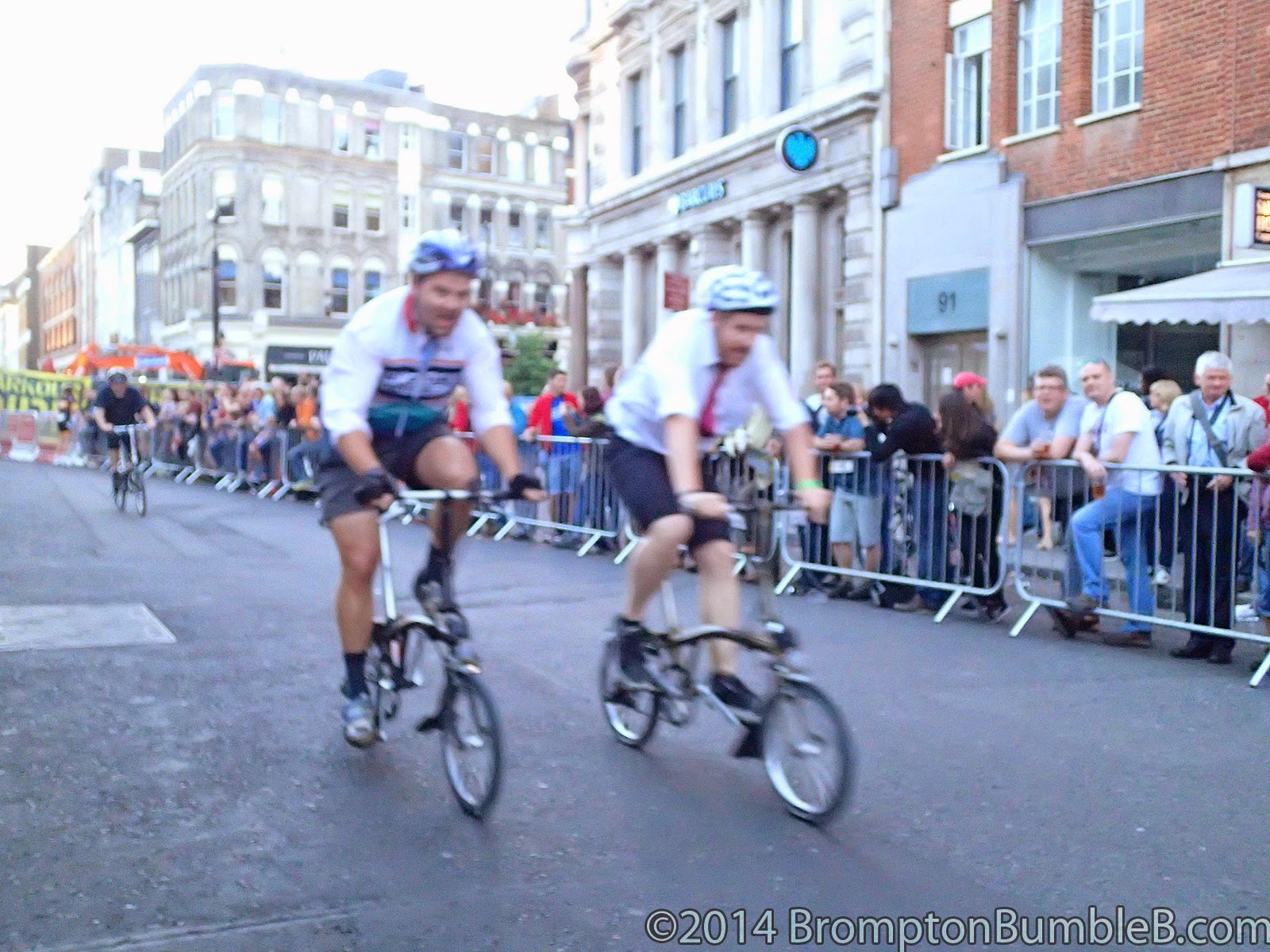 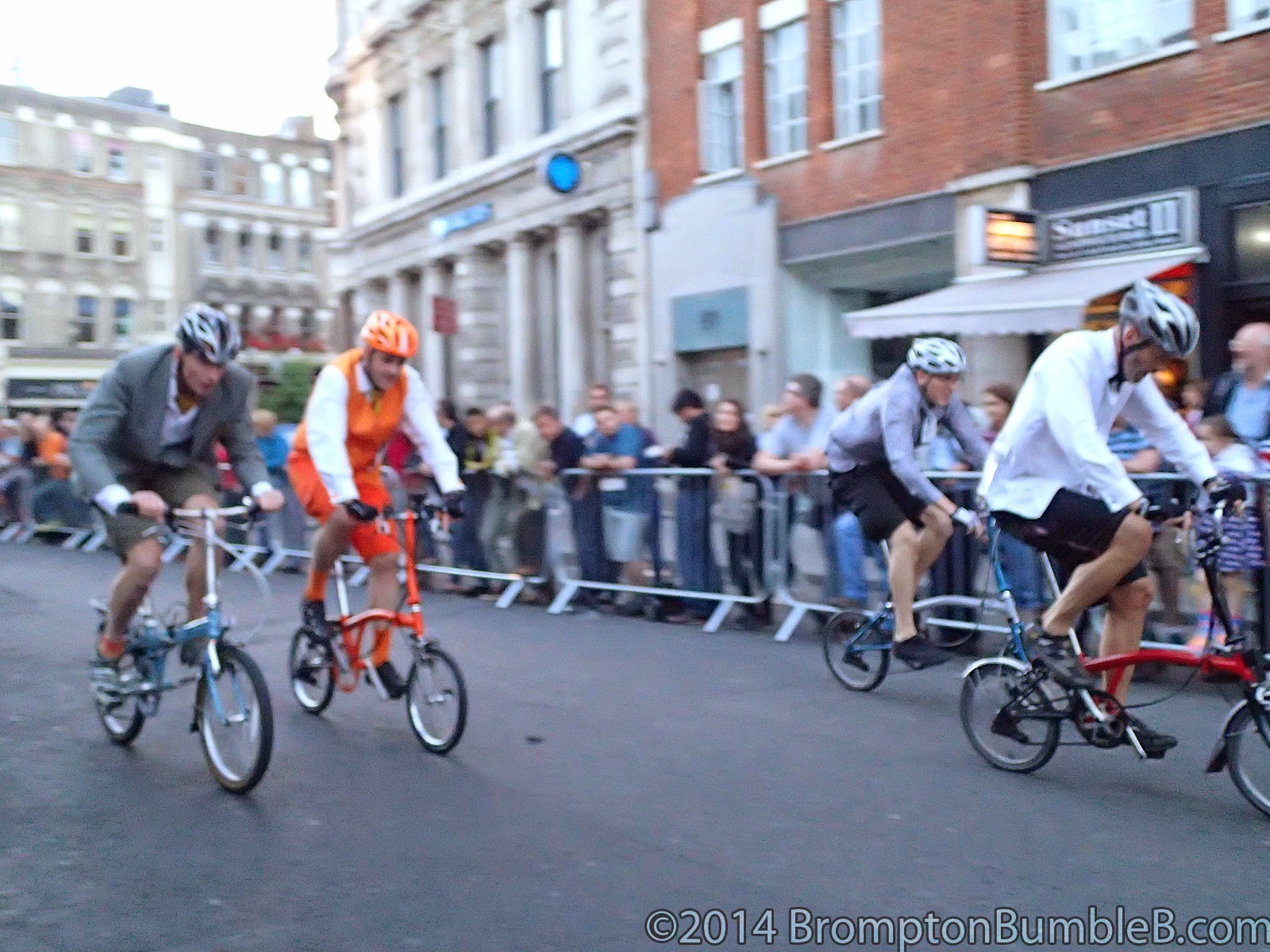 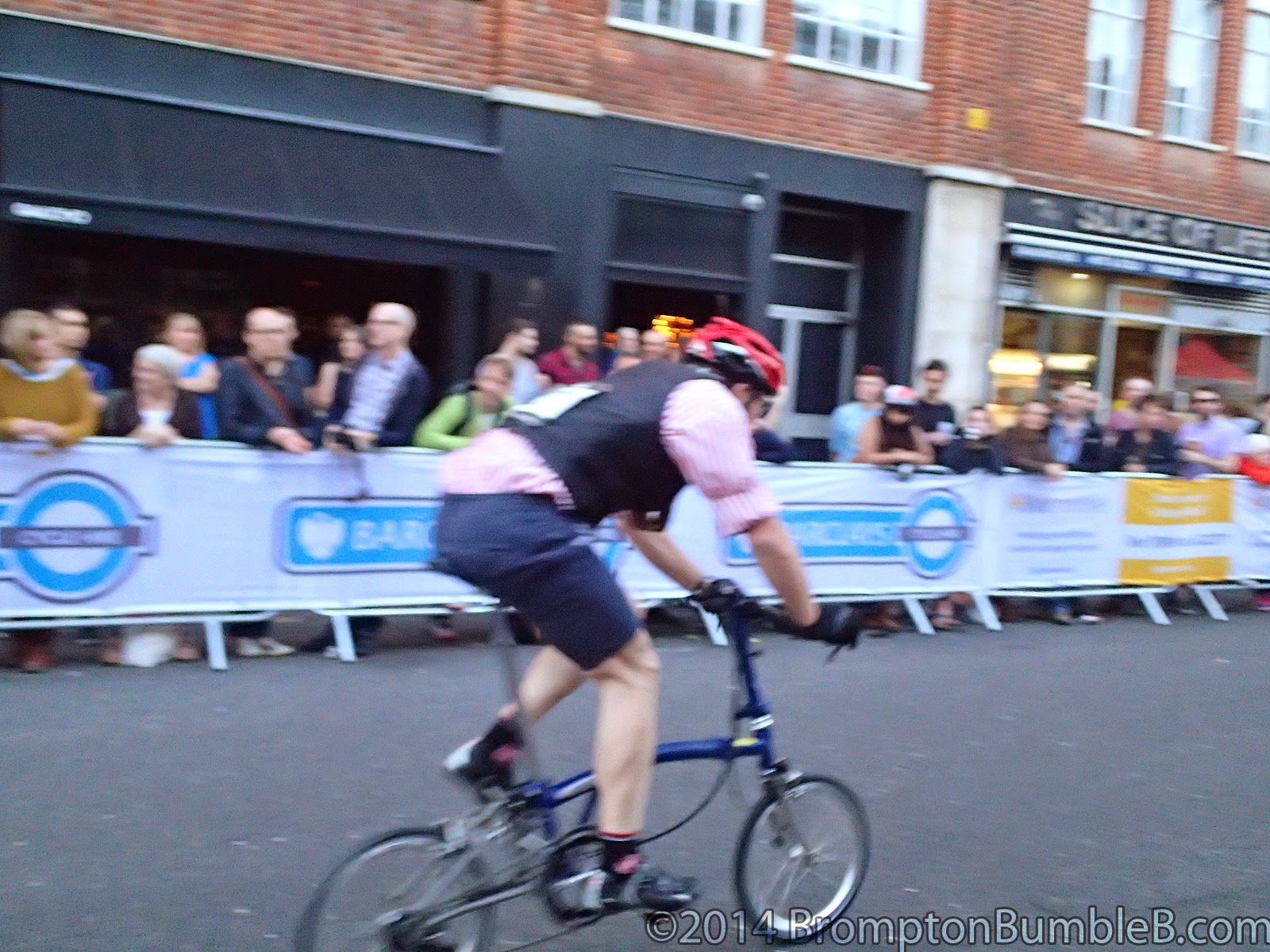 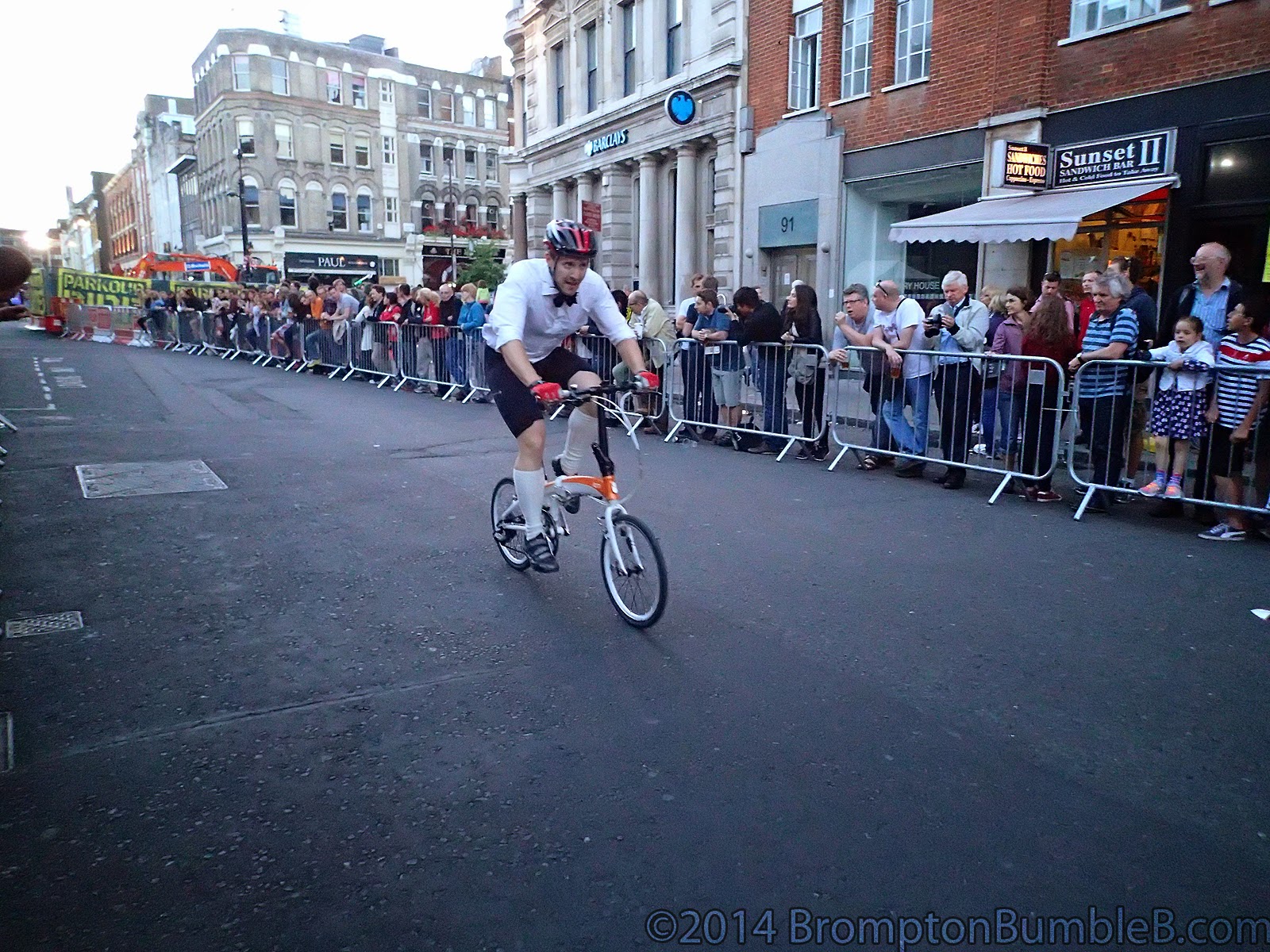 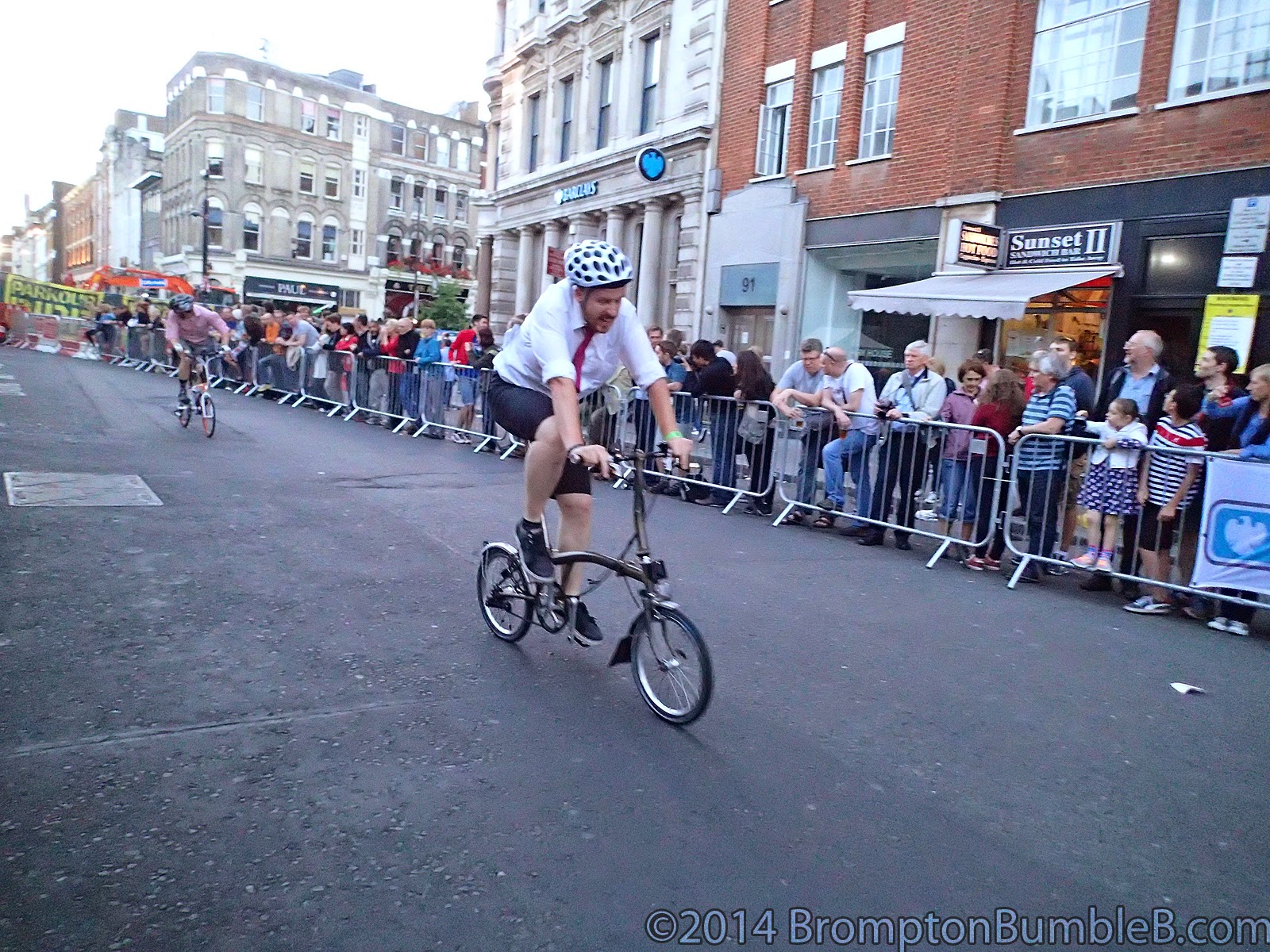 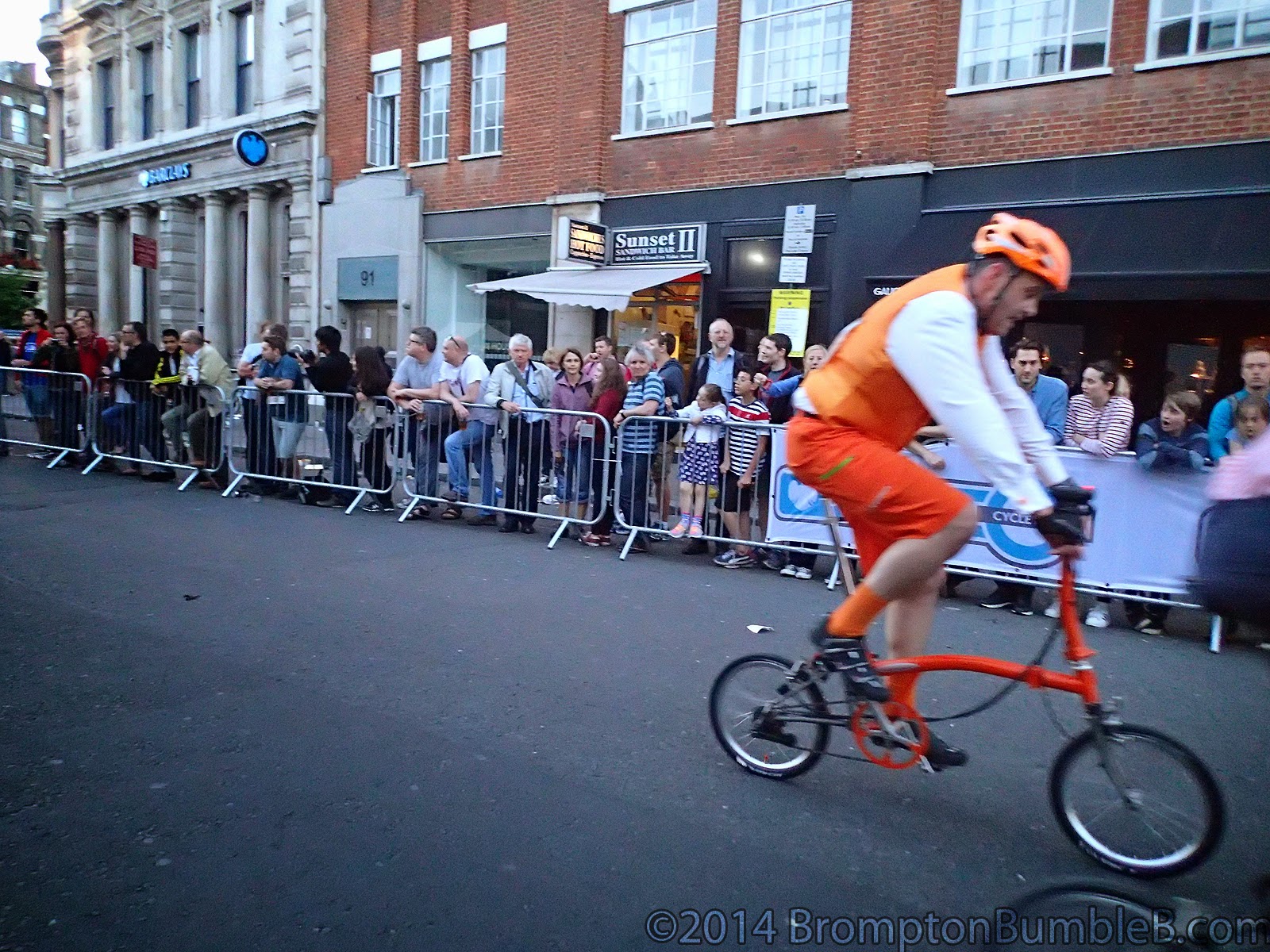 Looking at my data compared from last year my Av speed was higher, from 15mph to 16.3

Nightrider 2014
Well while everyone else made their way home me and Mr.O had anther event to attend, the Nightrider.

We did the same thing last year and I knew could do it again without any problems. I got home and changed into my BBB cycling tops and got delayed looking for my cycling glasses. I found another pair I had which actually worked out a little better.

Getting to the start point was the first mission. For some reason I thought I was starting and Crystal Palace and started to head there but checked and turned back to Alexander Palace before I got too far. Once I hit Finsbury Park to get the overground train there was alot of confusion as to what was going on. Seems the trains where delayed and  changing destinations. Finally we got moving and arrived at Alexander Palace about 40mins late missing my start time.

One thing that Mr.O had noticed earlier when I posted my photo of me getting my riders pack was that he had the next number. I was 0931 & he was 0932 which was not planned at all it just happened like that.

After rushing though registration we got into the next staggered start time and we was off  at 00:25
I lost Mr.O at the start of the first big hill which is what I expected. I know that he loves the challenge of pushing himself esp on hills. I just made sure I did the hills my way which may have been slower but I kept pedalling in most cases. If anything I stopped a couple of times but not walk up which is now my mission.

Anytime I get to a hard hill and I feel that I can't make it I stop, get my breath back then carry on pedalling. With the new reduced gearing it made this a whole lot easier for me and has in turn made me a whole lot happier with my cycling. I now know the buzz Mr.O gets out of going up a hill especially without putting a foot down.

While cycling along I got into a few groups along the way and struck up conversations with everyone to past the time. Most of the time they where commenting on me doing it on a Brompton. This always makes me smile as people thing cause of the small wheels it wouldn't be up to the job. I'm slowly but surely changing the mind-sets of cyclists not knowing the  "Power of the FOLD!" 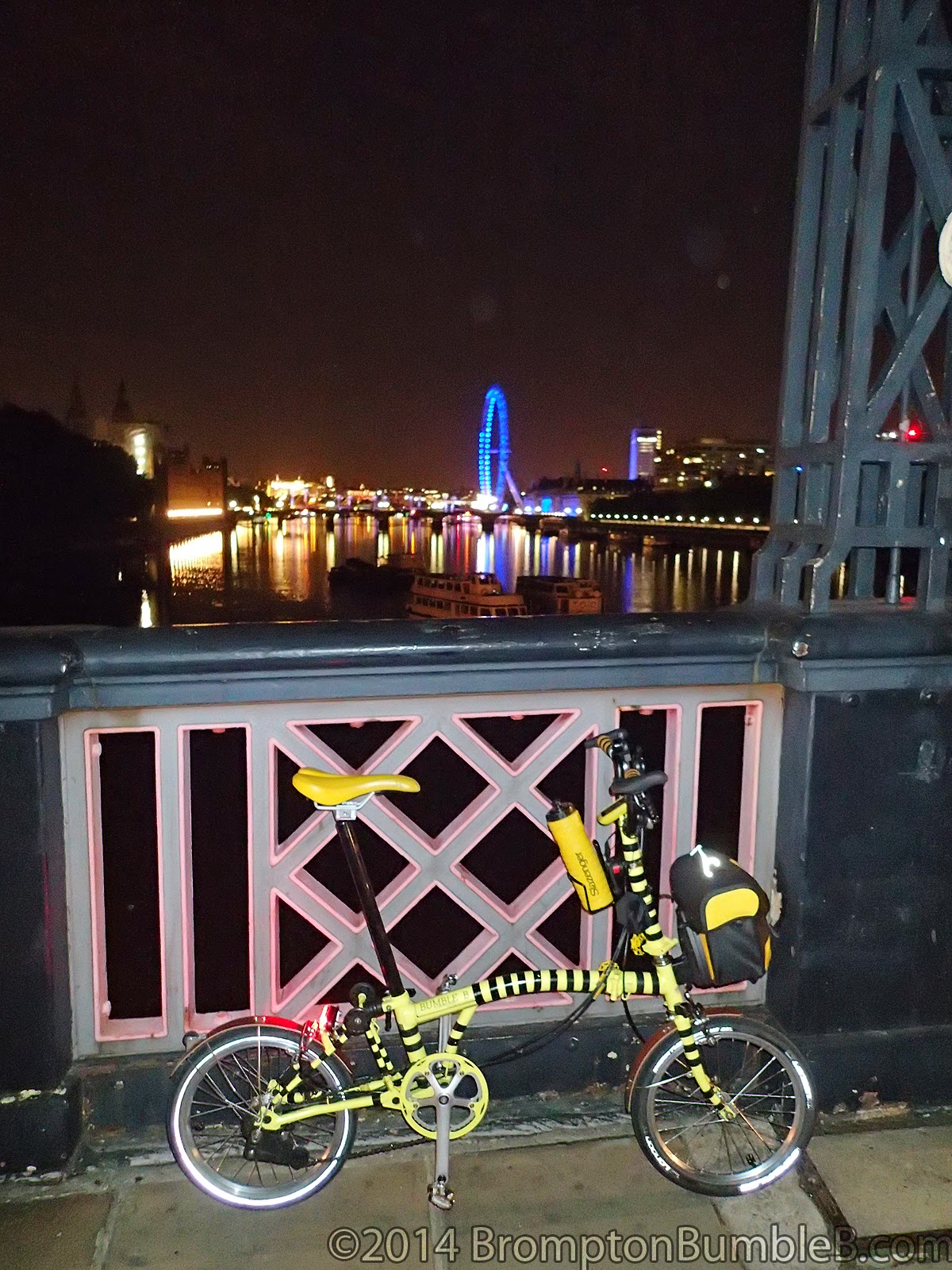 Didn't really take many photos on the first half of the ride as it was getting though Central London with busy traffic and clubbers as always. This is where the Brompton comes into its own, While everyone was holding back and threading their way though the heavy traffic me and BBB just fly though hardly stopping and manoeuvring easily and quickly.

Focusing on getting to Crystal Palace I knew I had gone past the half way point and would be heading back northwards and the home straight.

A tip that Bob H gave me is not to stay too long at check points, basically stop for  refuelling, fill water bottles and go. This way your muscles don't relax too much and you don't get cold either.

Finally got to Crystal Palace just before 03:00hrs 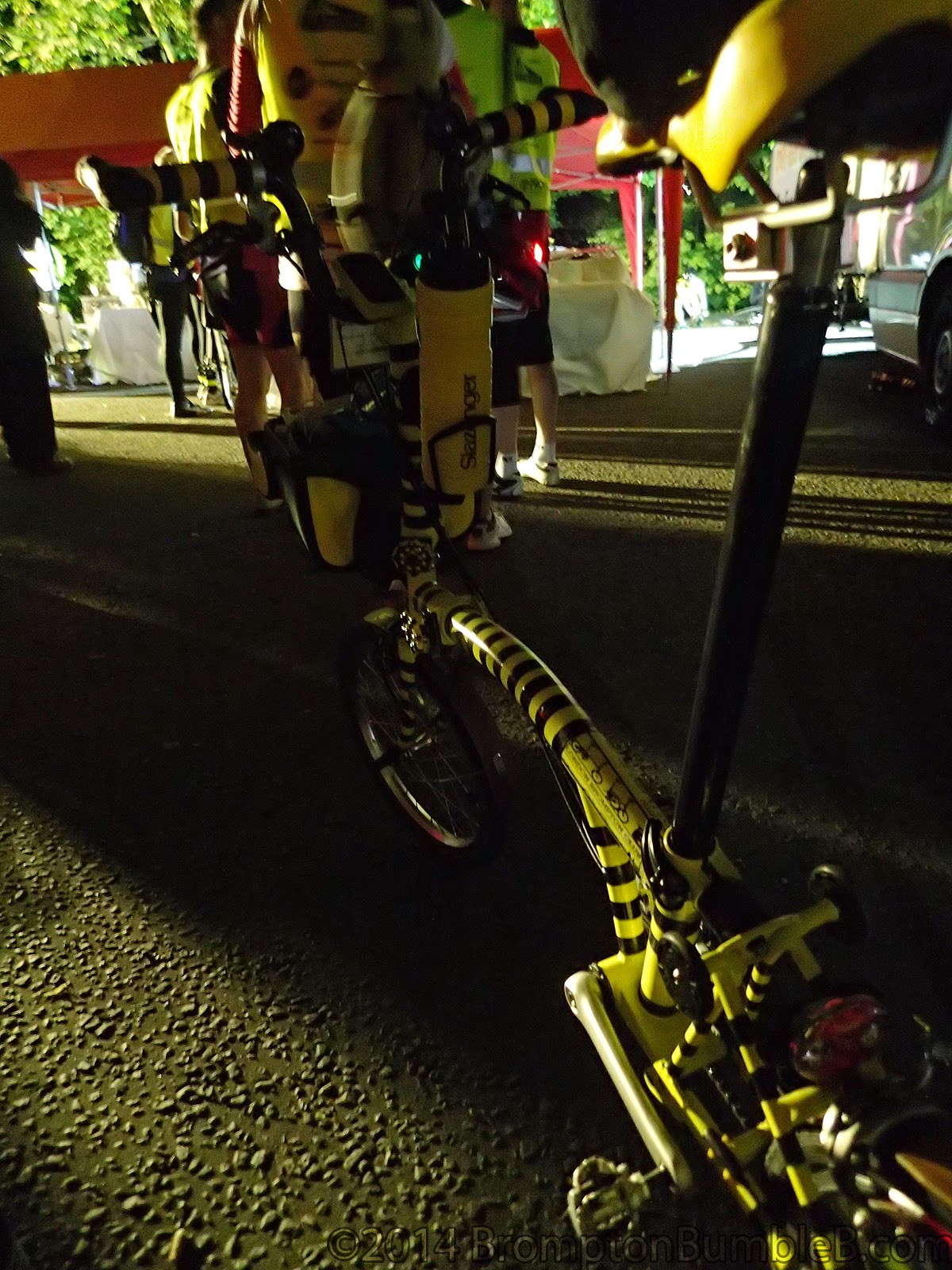 Now with the sun starting to rise I started to really push harder as I knew I had broken the back of this ride and it was the home straight.

There was a few really nice down hills that I enjoyed but twice my water bottle shook itself loose form my bottle cage and fell off so I had to stop and grab it. Second time though the top came off the bottle and I had about 1 mouthful of water left inside. I started to worry abit as I have been purposely taking little mouthfuls of water on a  regular basis but then I remembered there where a few more check points coming up and just kept on pedalling. 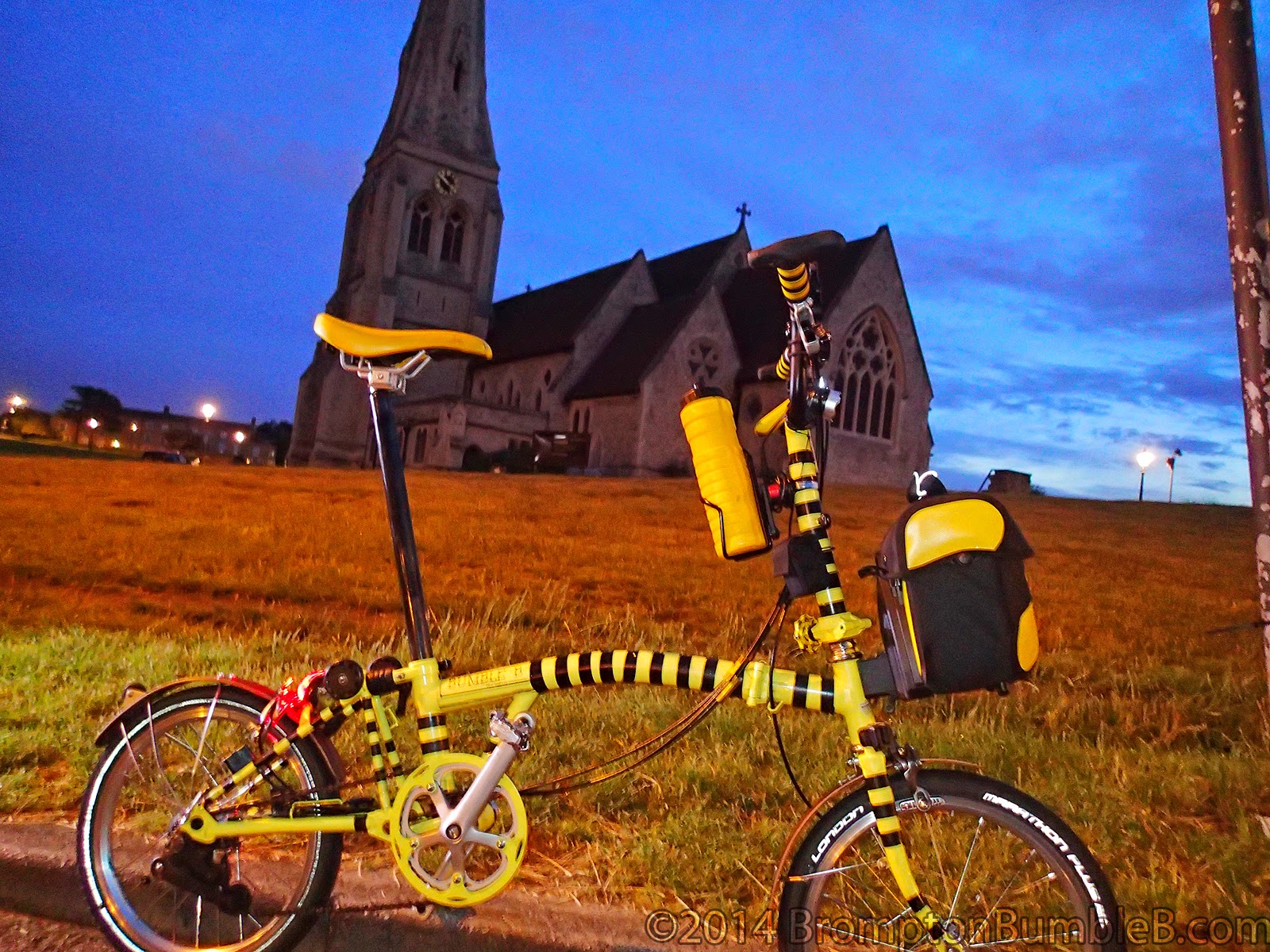 Thankfully a check point appeared not long ahead of me where once again I stocked up on water, snacks. Now the sunrise was pretty amazing at the check point near Tower bridge where I was reminded of a number of rides I have been on. 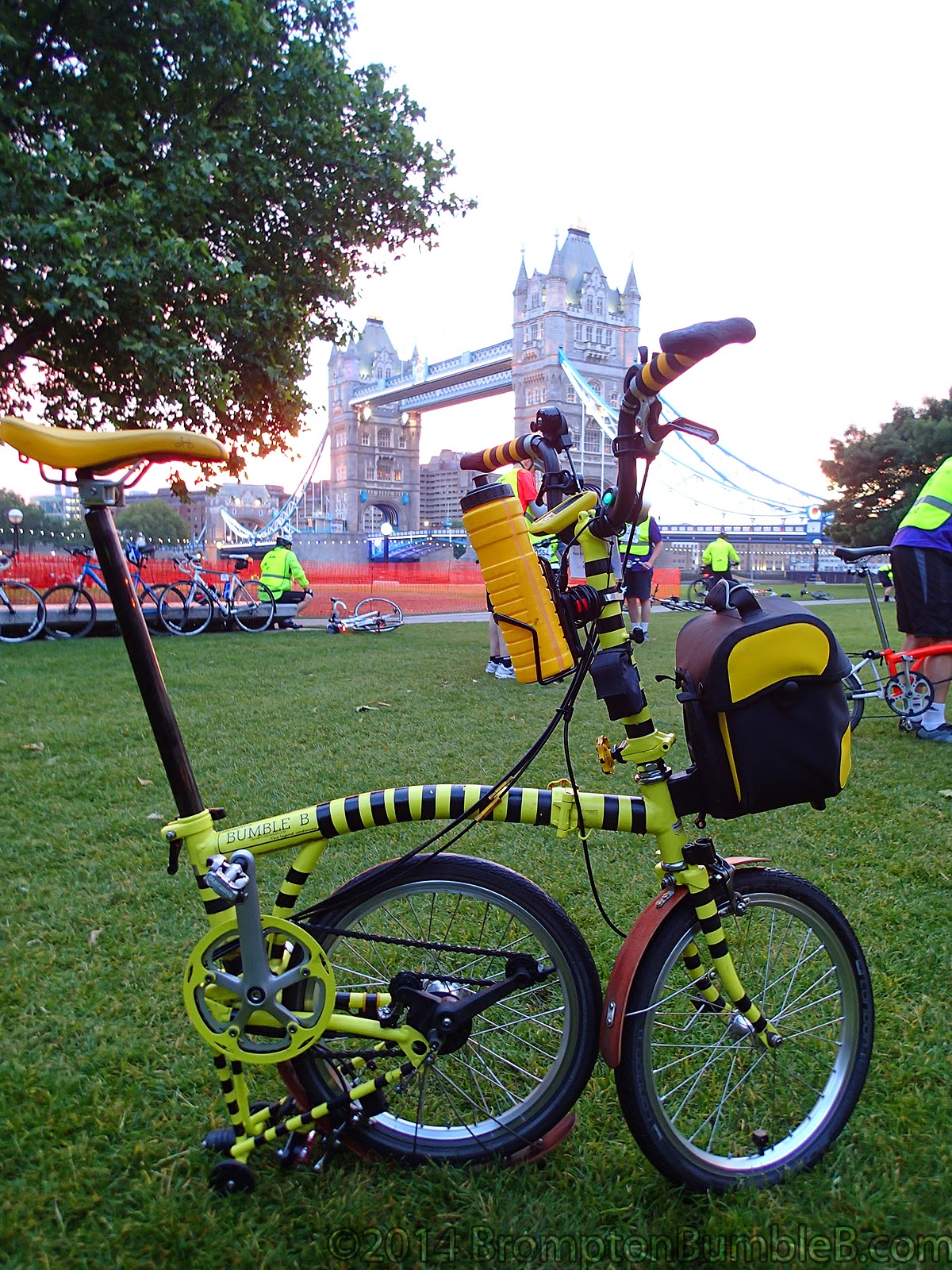 This kicked me off into a higher gear as I started to really push again. Sometimes I would kick myself into a short sprint once in awhile. 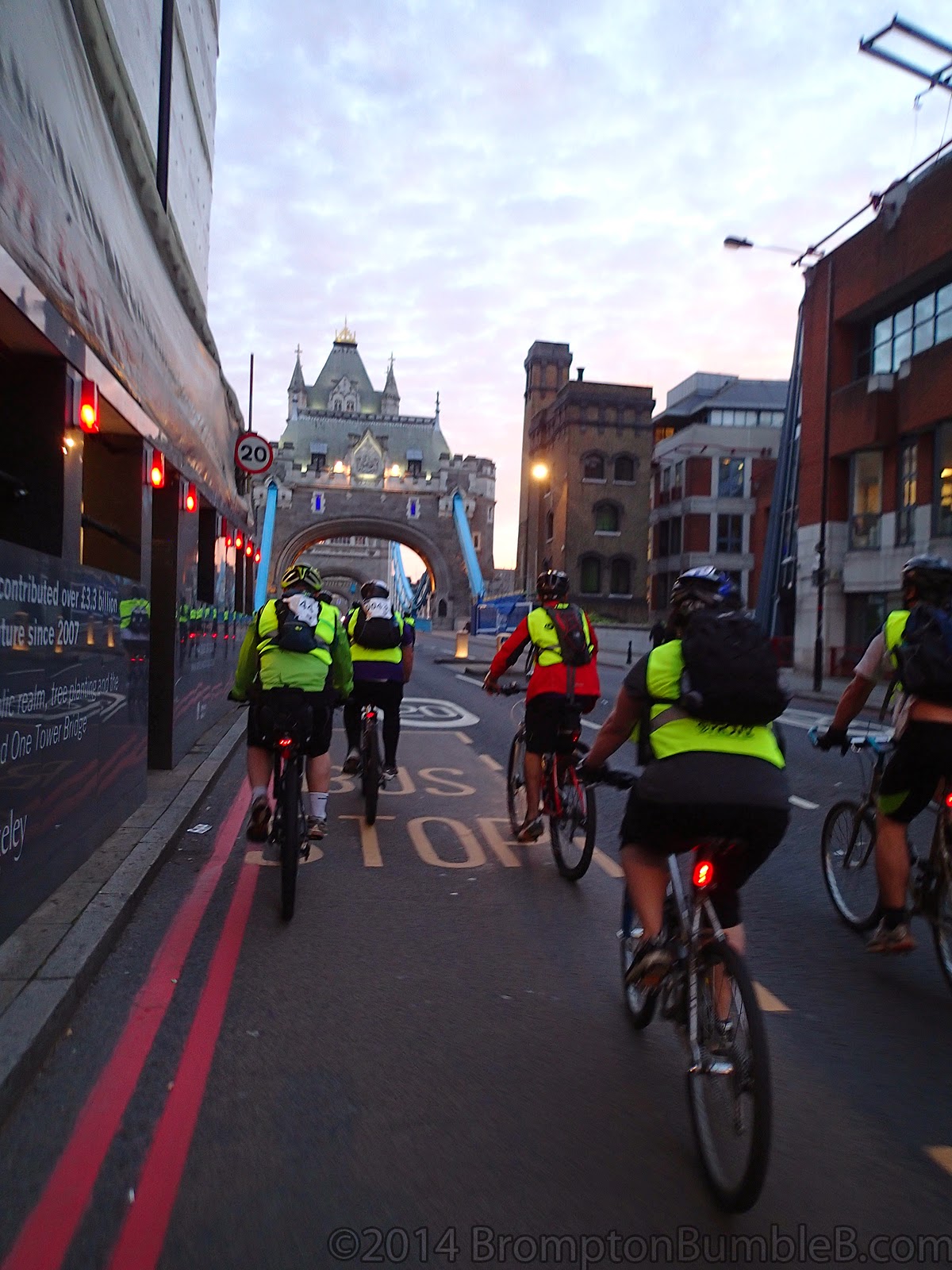 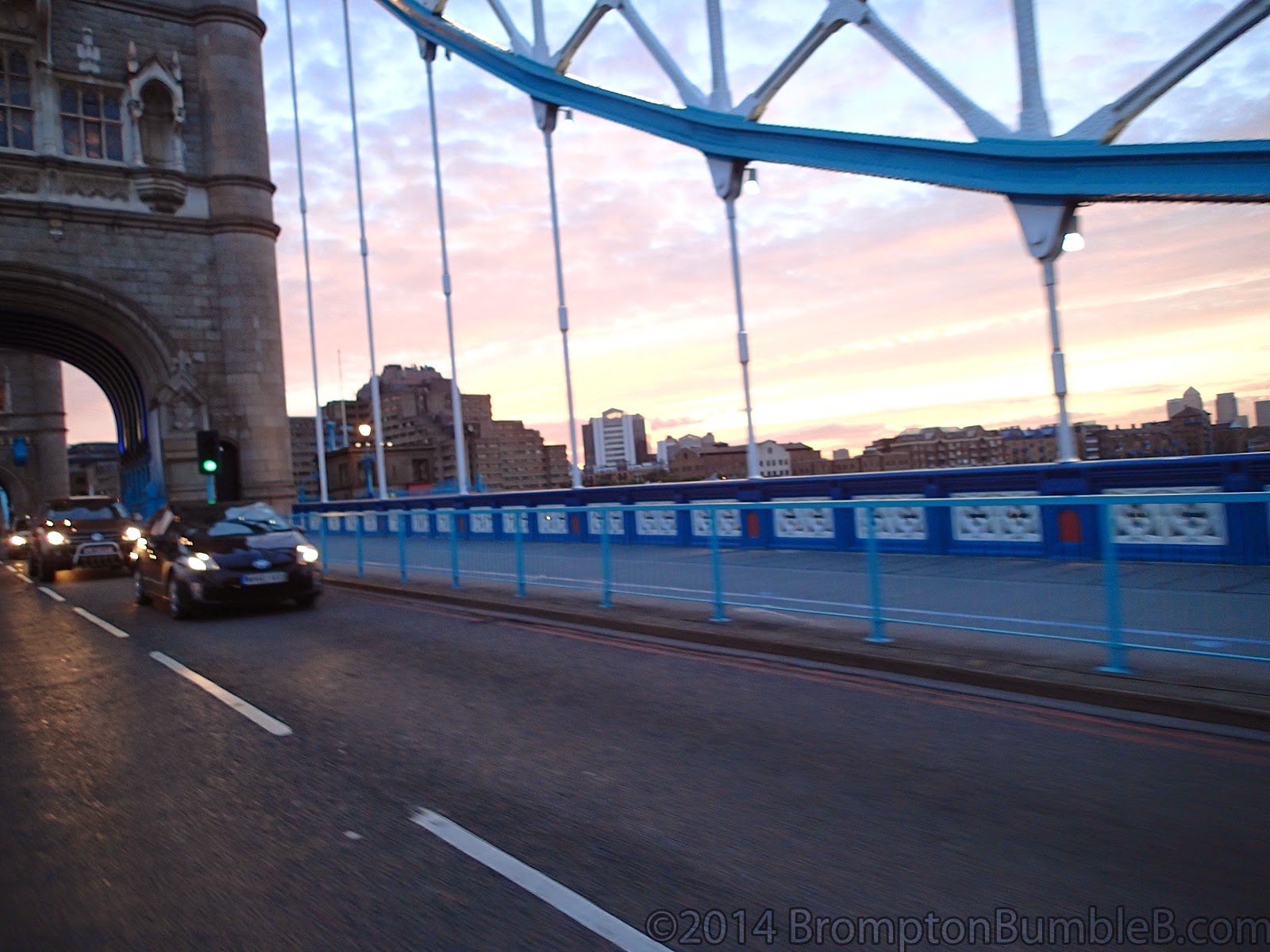 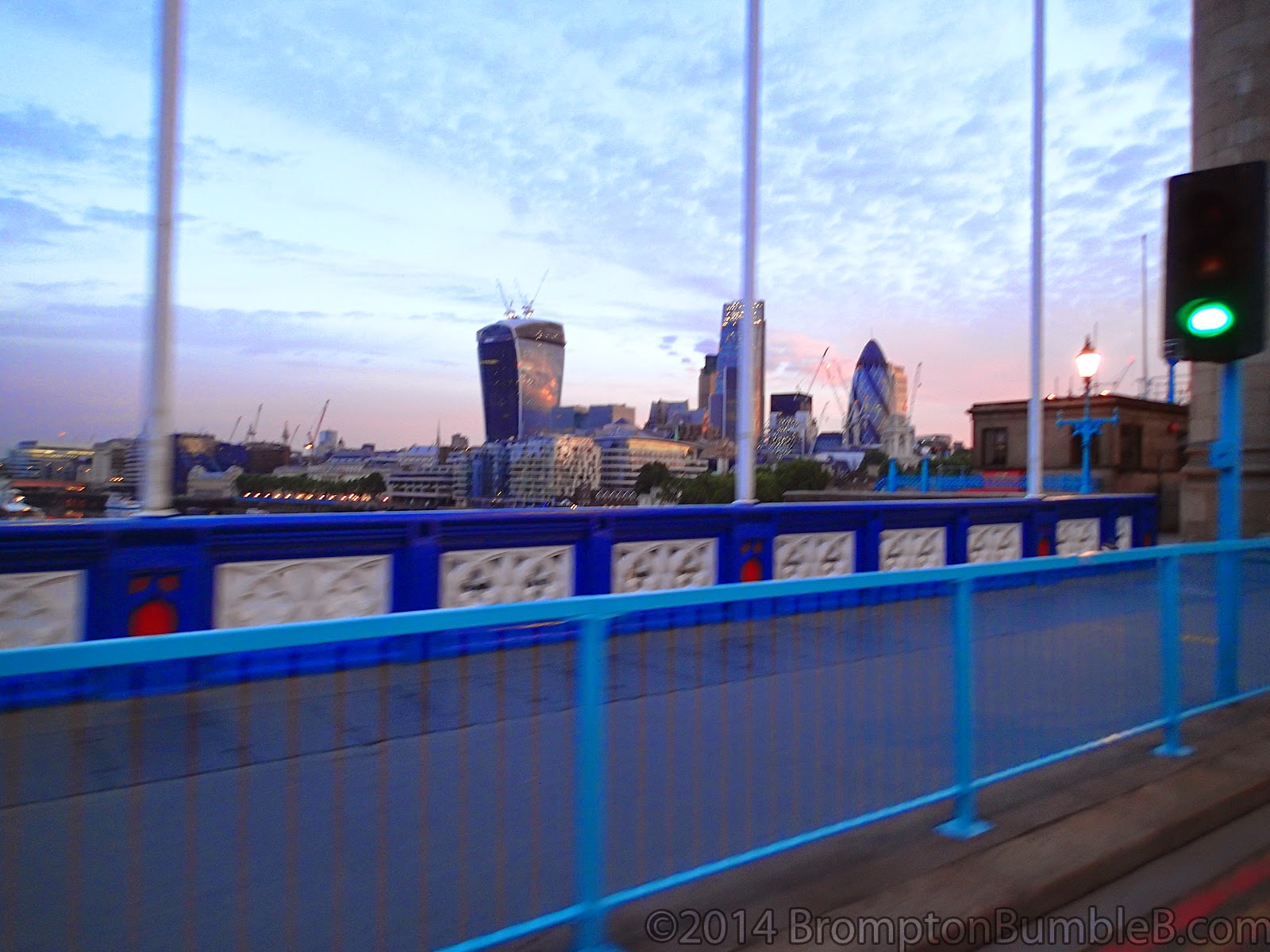 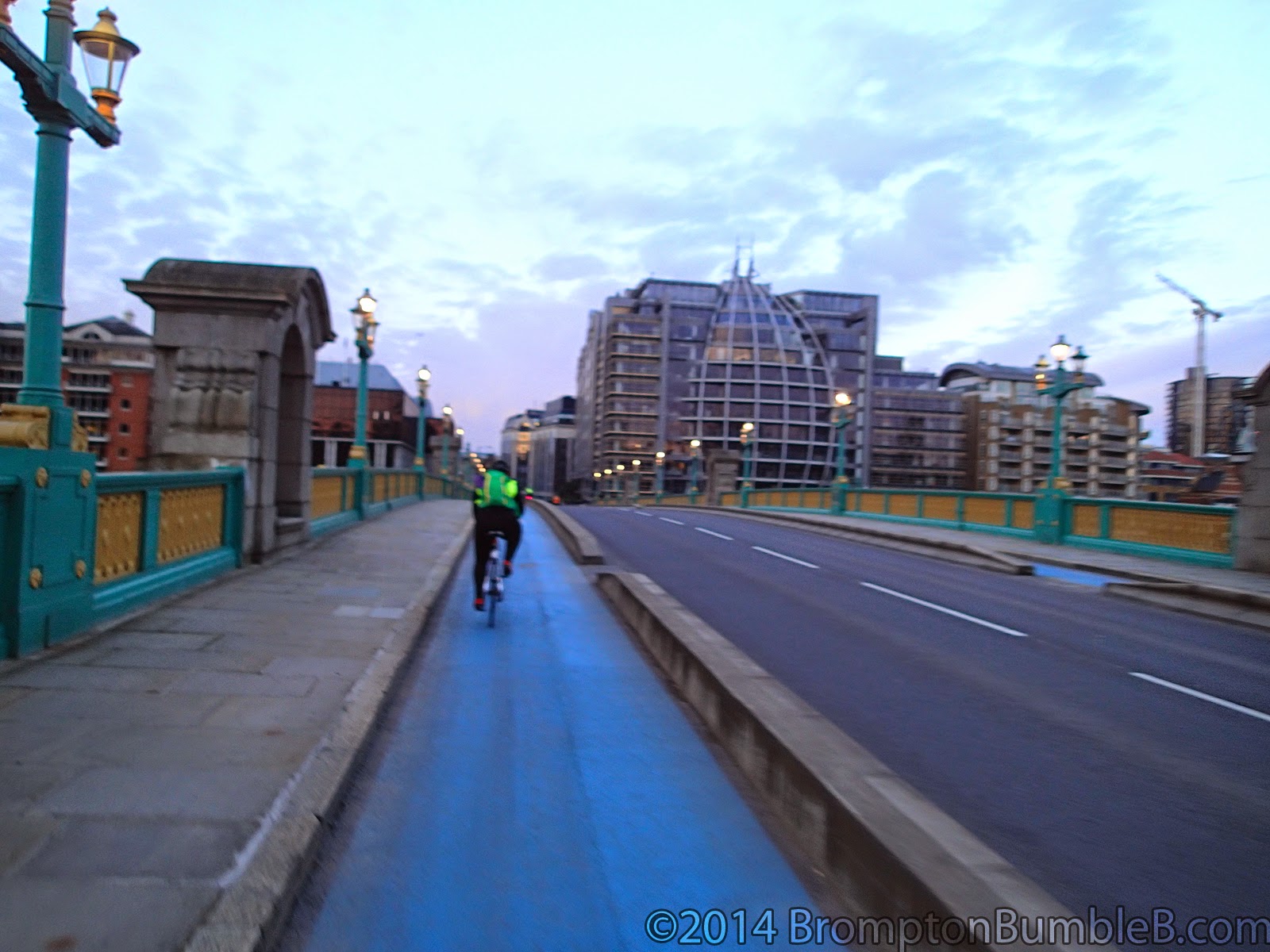 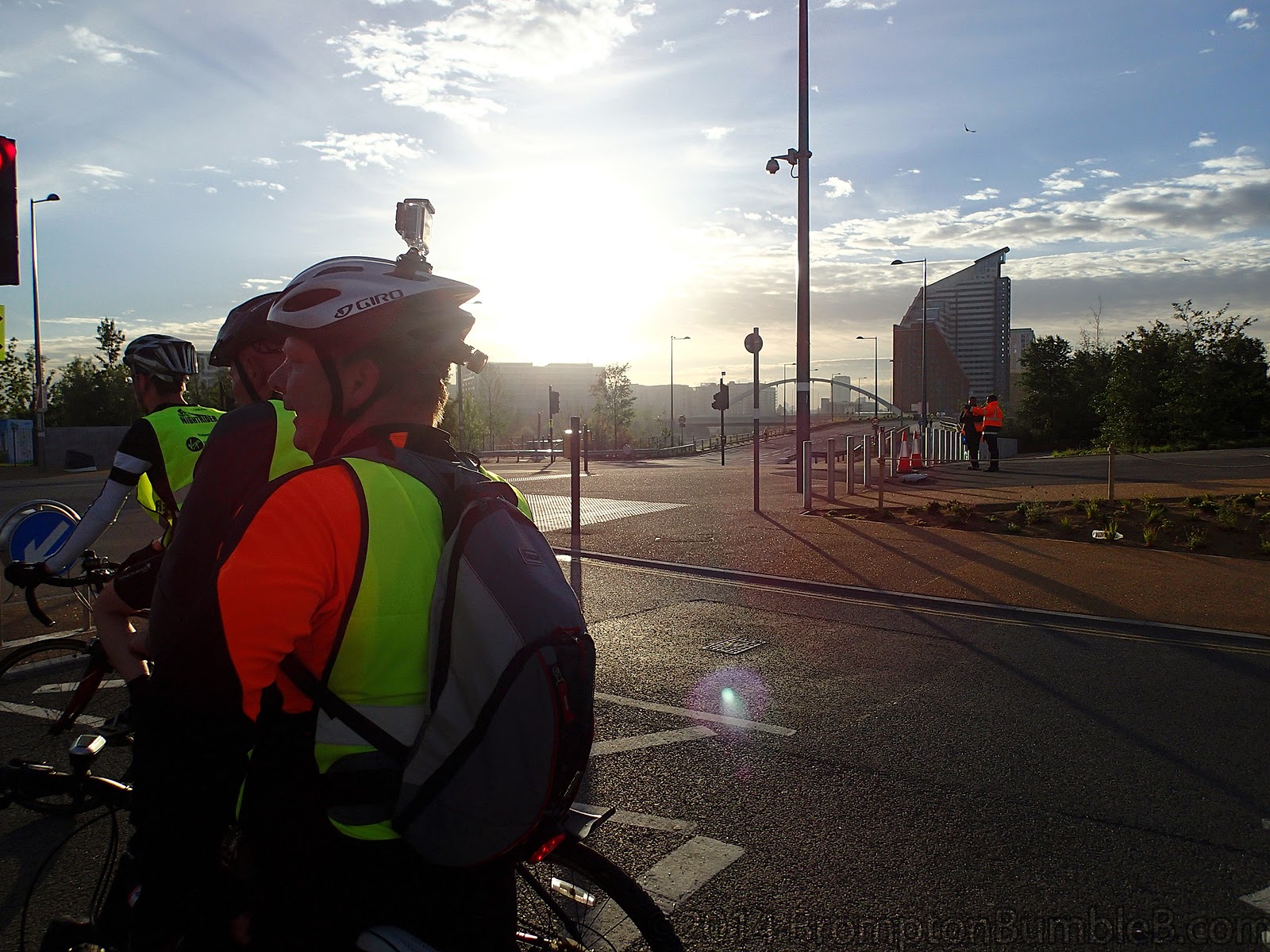 I was practically home turf so was enjoying the ride even more but then I knew I had one last MEGA hill to kill. The last hill is the one leading up to Alexander Palace which is a bad one. I attacked this hill with everything I had but with big hills I did my stop start routine  on it and I was really getting angry at it to be honest. I say sorry to anyone that was in ear shot of me while I was going up this hill was my language to myself would have made even a sailor blush and cover their ears.

We made it. Finally finished the Nightrider London 2014 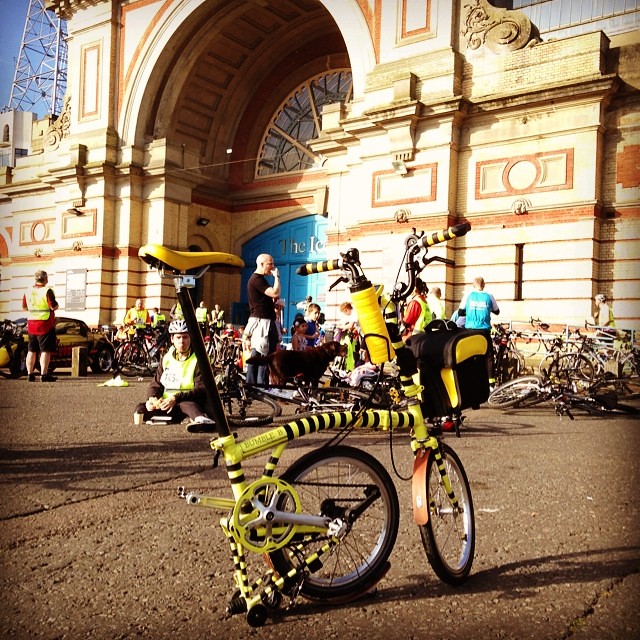 I had a little rest and enjoyed my bacon butty and tea. Repacked my Mini O bag and made the journey home. By all accounts my cycling partner finished just after 05:30 and I finished about 07:00

Big thanks to everyone that was supporting me and BBB on both of these rides and to Nocturne Series & Nightrider folks.

See you next year :D