Once again dear readers, we of "The FOLD!" step into the abyss of Central London on a Saturday night.

Now during the last few days it has been snowing, yes SNOWING over most of the UK and alittle has fell in London.

I had been watching the weather all the whole time wondering if we would be able to go out.

Bumble B was very ready, all clean & oiled up. I was ready fully fuelled, rested and ready for the Monopoly Challenge.
I decided to ride all the way from home to the meeting point at the McDonald's in The Strand. I wasn't sure how long it would take me so I just pedalled on at a far old clip. I was pretty surprised I got there quiet fast in a time of 47mins to do 9.75miles (Av Cadence: 82rpm)

I was first to arrive and was pretty early but with London still in full swing it was still pretty busy at 23:30hrs. Being right next to Charing Cross mainline station party goers where heading to pub/clubs/home. After a little while me & my fellow hardcore LBC "BADASSES" arrived bringing our total  number to 6.

I could see on Mr. OrangeBrompton's face that he couldn't really believe what he was seeing of the party goers behaviour. It was pretty crazy and as he would tell you a real eye opener to to him as to what really goes on in Central London at these kinds of times. Almost on cue we saw a young lady being EXTREMELY sick in the corner outside the McDonald's with her friend comforting her as best she could. We swiftly exited the area, got our wheels rolling and left the party goers to their own devices.

Our first stop was HM Revenue & Customs building near 10 Downing Street. As where stopped to take a few photos we heard a voice come from no where, it seemed the secruity of the building was talking to us though the intercom by the main door asking if we was alright. Mick B had a little conversation telling the security on the intercom what we was up to and they seemed satisfied. Well we didn't see any armed security guards running in our direction so we made our escape.
Just up the road we stopped off at the gates to 10 Downing Street for a few minutes and said hello to the 2 armed police officers standing behind the big gates. Poor guys standing in the cold but very well wrapped up.

On wards to our first surprise of the night that David P had in store and this one was for Mr. OrangeBrompton. We ended up at a street called Orange Street :) ofcourse we had to stop and take a few photos.
Once again I heard the sound that strikes terror into any Brompton owner's heart that of a Brompton falling over and crashing to the ground. Parked on a uneven surface this is something that does happen and always scares the hell out of me.

We then moved on down the Strand and cruised past The Old Bailey & Central Criminal Courts.
The weather wasn't playing nice but we all soldiered on against the wind, snow/hail and cold.
We was guided towards a place I had been to before on a iBikeLDN Ride to the Russian Tank on a private piece of land. Last time we was here a few artists where painting the tank & seems to have been finished & now be very colourful. It's said that the barrel is pointing towards the local town hall that tried to get the tank removed, as you can see they failed.
We then headed off and crossed Tower Bridge which was very nicely light up and also pretty close to where I did my Multimedia Degree a very long time ago.
Next stop was Fenchurch Street Station which is very tucked away behind pretty big buildings and it would easily be missed if you didn't know exactly where you are going.

Heading into East London a little bit, we ended up an the Old London Electricity board building which now is used as a film sets etc. 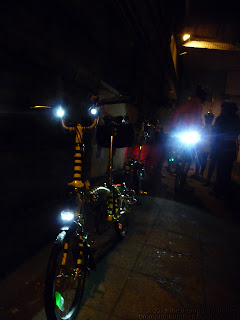 Cause it was so dark in this area under the building I ended up slipping and falling on my side, not bad but I got abit messy, but most importantly Bumble B didn't fall as I kept him upright till someone took him off my hands while I got up and brushed myself off. (Take note Mr. OrangeBrompton >:P)

Next stop was was Pentonville Prison, we didn't want to stay here too long incase there was an escape and they wanted a get away fold up Brompton as you do when escaping prison.
Our next stop is a place that I go past all the time when working, the Water Works. I've seen this building being renovated a few years ago and turned into flats but due to planning restrictions they are not allowed to change the main structure of the building but they made flats on the inside.
We was about the half way point and headed to St. Pancras Station to get warmed up and refills on coffee.

After our little break we headed off towards Marylebone Station. I did like the ironworks from the station exit to the Hotel. 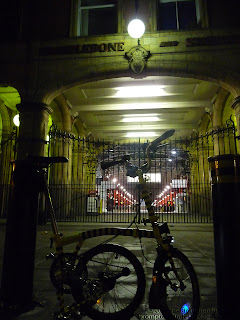 While on way to Buckingham Palace we past this, not sure what it is but I love the lighting on it.


Finally we came to the place where it all began, the birth place of the design of Brompton Bicycles on Brompton Road

This was the official end to the ride and what a damn good ride too. We all headed back towards the start point hungry for some breakfast. Here we said our goodbyes to Ann & David P and Clara P. The McDonald's on The Strand was still pretty busy so I set my Garmin to find another one and me, Mr.O & Mick B headed there and had a hearty breakfast.

Afterwards we parted ways as they had they cars to get to so we rode towards Oxford Circus where I decided  to head home on the tube.
It was a hell of a ride with very trying weather conditions. Wind, icy snow & cold. We laugh in the face of these things we just put our heads down and keep spinning. I have to say the SealSkin gloves held up pretty good in the conditions, very glad I got them now. Only this I really have to look into is better footwear. For the whole ride my feet where pretty cold as the trainers I have are pretty old and probably made for summer anyway.

To my fellow LBC BADASSES I salute you, us brave 6 cycling though the darkness and into the light.

WE ARE ALL LEGENDS


This is the start of a busy few months as there are a few rides coming up both big and small that I have put my name down on.

In the next couple of weeks I shall also be undertaking a major upgrade with Bumble B and transform him into something wonderful. Watch this space as there will definitely be a full report on the process. I'm both scared and excited at the prospect of the transformation.

As always below is my ride data captured on my Garmin Edge 800.

Until the next time, PEACE