Otford to Whitstable 2019: The return

So this was a ride I had been looking forward  and dreading at the same time. I wasn't sure I would have been able to do it but managed to get time off work to go.
This would be be the first big ride I had been on for a good few years and I not as fit as I have been in the past.

Packed up Bumble B and was not goign to take any waterproofs as from what i saw the weather would be pretty godo but something in my head no, take my light wateproof jacket. I picked it up but it had a huge hole in it. I thought DAMN I going to have to take my old heavy one which i didnt want really. Searched though other stuff in case I had something else and found a brand new light waterproof jacket that I had forgotten I bought a month ago. Boo yah.

So off we went to Victoria Station to catch our train to Otford Station. I was also joining a few others on the train and made sure I caught the same one. Me, David P & Anna M, was great seeing them again as I haven't seen them for along time. Also had a nice surprise of seeing Geof S with his family heading off afew stops after we'd get off. It had been along time since I had see Geof S and was nice little surprise for everyone. 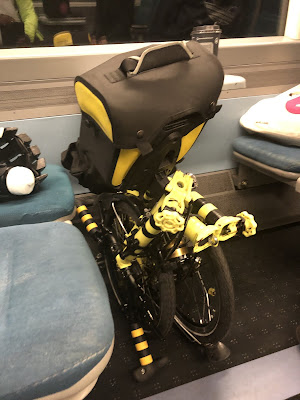 We arrived at Otford Station on time and had to wait to see where the hardcore that was coming all the way from Central London where at. At this point I was starting to get alittle nervous, this was my first major ride in  over 3 yrs and I wasn't as fit as i should be but promised myself I would do my best and not over do it especially on the hills.

So off we went following Pilgrims way a cycling route that lots of cyclist undertake. I already had the Mark W route loaded into my Garmin so kinda knew where the hills where.
At one point someone said that my nuts where falling out. I was abit shocked thinking eh, what? did I hear that right and started to laugh. She saw that I was abit shocked and said it was my cashew nuts was starting to come out of my saddle bag alittle. The things that happen on a cycle ride are crazy at times. 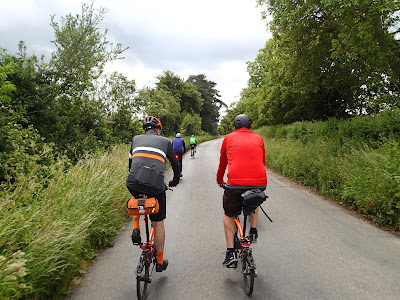 Was pretty much just focused on keeping my rhythm going. As we hit the 10 mile mark I could feel that my body was starting to get used to the stresses. 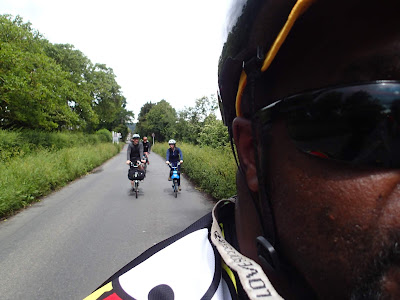 The country lanes where not very wide at all, some where nicely maintained others pretty rough with alot of branches and gravel which could make things difficult.

It seems now I was right to bright along my waterproof jacket, in fact I should have also bought my overshoes as when the rain did fall, then with the wet roads and puddles everywhere my feet got wet pretty fast and stayed that way til we got home.

At around the 22 mile mark we stopped for lunch at a lovely pub The Kings Arms we had been to before. 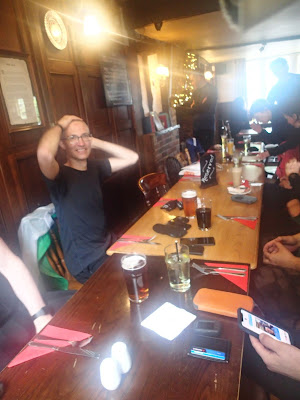 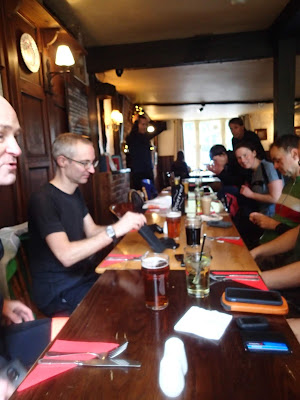 While here I got a present from a very good friend Susanna via James H. As everyone knows I'm crazy about anything Bumble Bee related. Thank you Susanna it was a really nice surprise & I will see you soon to thank you properly.

While at the pub I ordered myself up a great Chicken burger with chips which really hit the spot as I could actually start feeling a headache slightly coming on. This means that I haven't been fuelling up properly on the ride so far. So made a mental note to make sure I drink lots of water and fill my waterbottle and take regular snack breaks. 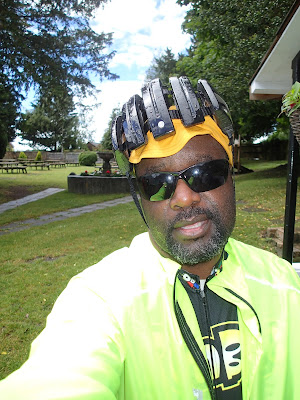 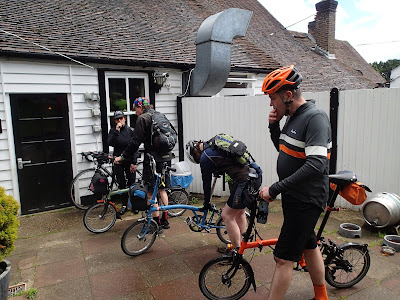 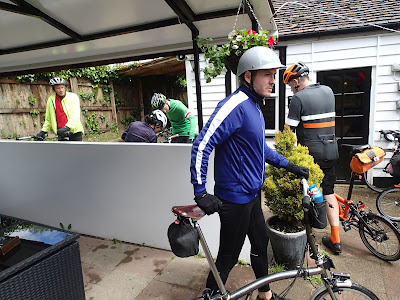 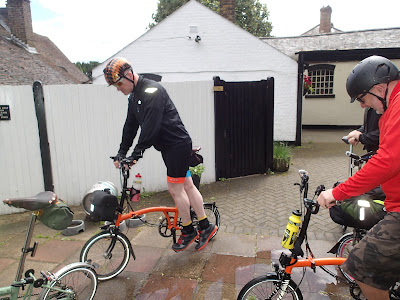 With the hills before us I was always kinda lagging behind, I'm never any good on hills so I take my time getting up them with . After the big hills even the small ones felt like mountains. I rode up as many as I could but when the going on tough I got off and walked pushing Bumble B. Was hard going but I had already got this far so I wasn't going to turn back now or find an escape route back to a train station.

When I was on my own I would enjoy the country side as it rolled by with all the smaller hills going up and down.This way I wouldn't keep looking at my Garmin watching the miles count down. Thats a good tip if your on a long distance rides, don't watch your the miles you have done or got to go. If anything only have the map up if you are following a route so you know what turns are coming up and to look out for them.

Seeing a few signs for the Pilgrims Way we probably pasted a few of the signs but this time I thought I better take  a shot as I probably wouldn't be stopping again once i got into a rhythm. 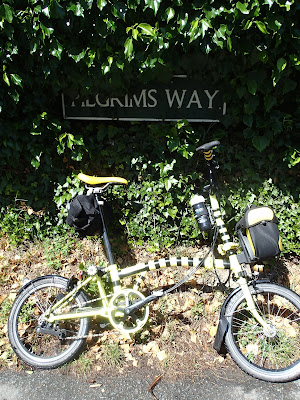 Now was the last big hill, this one was about 0.5 miles long and yup I walked up most of it 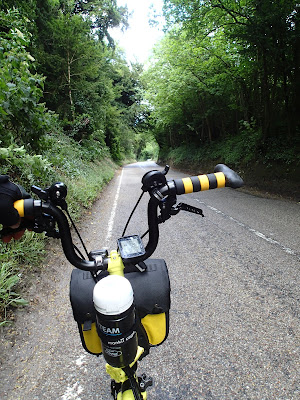 Lucky the others waited for me at the summit & I was able to have a short rest before heading onwards. Thanks guys.

Along the way I managed to get ahead of the group, I had the route on my Garmin so I kept going on track. We eventually came up on an over past and heard that Ann M had a puncture on her big bike and a Brompton was having issues with is rear rack. Seemed that the bolts that held the rack together had pretty much been shake off and lost. Puncture got fixed and a few zip ties for the rear rack and it was all sorted 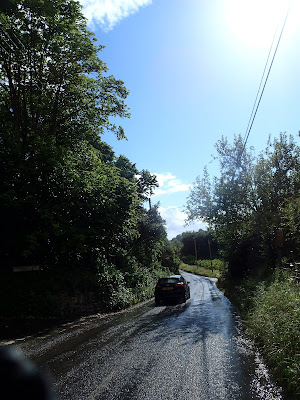 In between showers the sun was bright and I was able to dry of pretty quickly. Sometimes I would overheat cause I still had on my waterproof jacket on so had to stop to take it off, as soon as I did I was able to keep a decent pace again.

With 15 miles to go we all stopped off at the same co op  super market I had been to before and filled on water and snacks. This is where I met my "Iced Bun" brother ;) Don't ask. What happens on a ride stays on a ride ;)

Knowing we was so close I got a second wind to keep going. I could smell the sea air 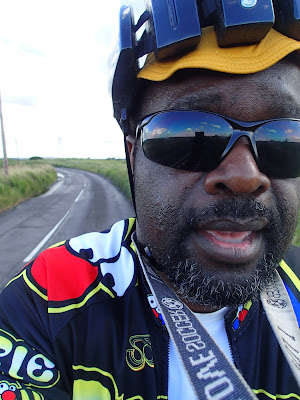 First sight of the sea but I still had a few miles to go before I got to the finishing point of the ride. 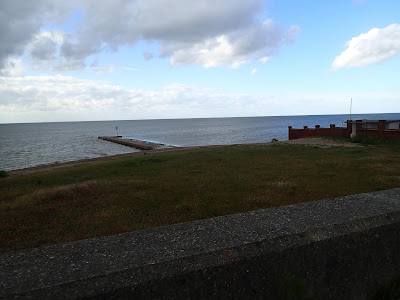 and finally we had arrived. The same spot we had finished at before. But this time nothing was open on the seafront, no ice cream truck not many people either. Well it had been raining pretty hard and wasn't all that warm either. After a couple of people actually went into the sea for a swim we went looking for some fish and chips. I didn't feel that hungry as it goes so only had a few chips offered to me which where pretty thick and I would have ever finished even a small portion of chips.

Finally it was time to get to the station which was only 5 mins away for our train back to the big smoke. Just as we got to the station it started raining pretty hard but we was on the platform under cover. Without riding so much I could really start to feel the chill in the air, the only thing that was still wet was my feet with my wet sock and cycling shoes. Mental note to make sure I bring my overshoes, may help in getting my feet so wet. 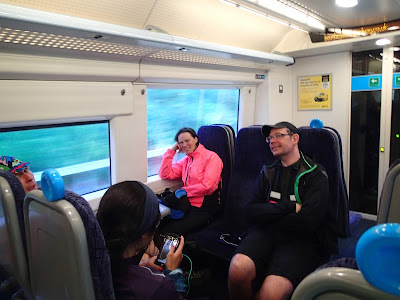 I have to say it was a good tough ride. I knew my first long distance ride would be tough but I managed it. I will be trying to do even more rides in future thats for sure. I had almost forgot how much fun it is.

As always here is my ride data, I may be getting myself a new GPS in the very near future.


Let me leave you with something I learned on this ride, Ice Buns will never be the same again ;)