A few times in the past we have ridden on the canal paths at night time. It's a pretty big contrast to how it looks in the day time I have to say,  at night its always recommended to ride with BIG lights & with a few other riders.

The meeting point for the LBC gang was the iconic London Eye on the South Bank.

As soon as I exited Waterloo Station there was a sea of tourists walking about so I had to ride slowly and carefully make my way to the base of the London Eye. Having my Cree headlight made this easy as its so bright people see you coming from a long way.

Reminded me of the Old Testament narrative regarding Israel’s passage through the Red Sea.

“And Moses stretched out his hand over the sea; and Jehovah caused the sea to go back by a strong east wind all the night, and made the sea dry land, and the waters were divided. And the children of Israel went into the midst of the sea upon the dry ground: and the waters were a wall unto them on their right hand, and on their left” (Exodus 14:21-22).


I saw the LBC gang consisting of  a number of regular riders aswel as a few new faces & my cycling partner in crime OrangeBrompton arriving the exactly same time as me. Having said our hello's and introductions to each other our ride navigation specialist David P lead our pendleton though the tourist crowded South Bank.

We was snaked our way underneath Southbank Center SkatePark with all the skaters & roller bladers doing tricks etc. One day I should go there again and take some cool action shots as well as the graffiti that's underneath there.

We stopped a few times while we was cycling along the Thames as the bankside is always has great night-time lighting. 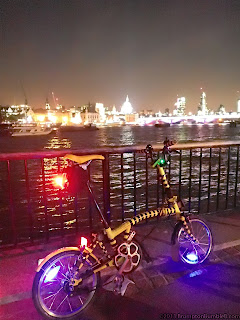 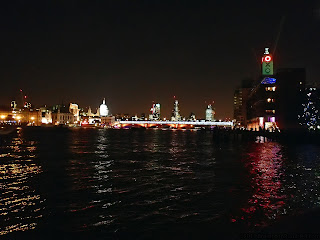 While we made our way though London to get to the Regent Canal system there was another cyclist on a fixie that rode with us for a short distance on the streets. I was looking at his body language & my "BumbleB" senses where tingling.

He was WAY to close to other members of the group. I sped up to keep closer eye on him just to be on the safe side. I don't think he liked me being as close to him as he was to my friends so he turned off. NOBODY messes with my friends EVER. 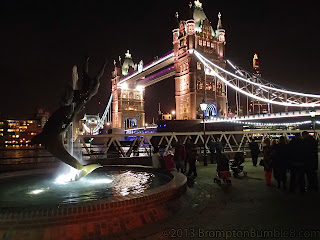 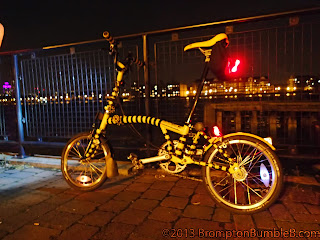 Onwards into the darkness and into Regent Canal system. 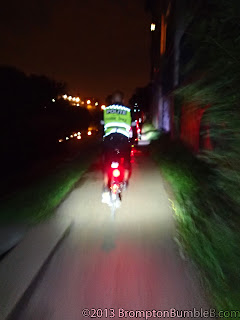 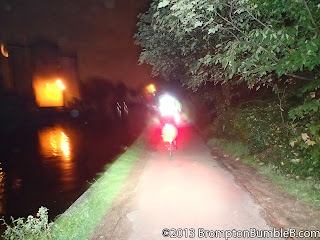 I've not been on the canal system at night time and forgot there is quiet a few clubs and bars along the pathway. Also I noticed there was quiet alot of ZOMBIES wondering around. Found out that my cycling partner is a big fan of zombies. I had to giggle as they looked so damn good. Blood, torn clothing even the white contact lenses. Gave me a few ideas for an up and coming Halloween ride coming up next month.


Looping back towards the Thames we came across a few artworks, I've taken this guy's photo before. 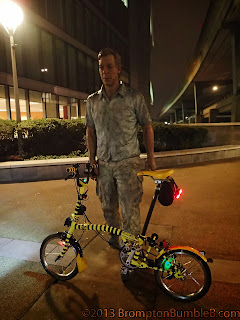 Another good ride with the LBC gang and I have to say we was VERY lucky with the weather. The temperature did drop a few times it seemed especially around London Zoo. This part of the ride was VERY dark as not much buildings or lights on the path around there. Good place for zombies to hide but we saw none.

Note: I also noticed that a few times I DIED. Well my Garmin Heart Monitor stopped working to be exact. It's the first time I've worn it when its been really cold temps. After reading up on it in forums its said that in cold temperatures that the Garmin Heart Monitor stops working and you have to warm it up a little. Changed the battery anyway as I haven't since I bought it
Posted by Brompton Bumble B at 12:07