Yesterday evening I killed a dragon.

Reading my cycling partner in crime blog about his adventures to Box Hill I gave myself abit of the willy's but it turned out to be a very small one ;)

I set off from NE London heading to the starting point at one of the entrances to Kew Gardens in SW London where we would be starting this legendary journey into the darkness. I was abit surprised at the traffic as I seemed to be blessed with busy but fast moving traffic though London and surrounding areas.

As I parked up I saw the now familiar sight of Jenny H waiting at the Kew Gardens gates. It seemed I would be the second to arrive and not fashionably late like I have been in the past. Things where looking good.

Unpacked BumbleB from the back of the car and rolled over to where Jenny H was and said hello. I found that when I was waiting there I felt alittle cold so I'm glad I brought with me my now life saving cycling jacket I got from ALDI months before. Not long after Ann & David P arrived as well as Mark W, Orange Brompton, Adam & finally Robin. We was running a little late so we set off at a pretty brisk pace.

I was a little worried at this brisk pace but my now trained legs knew what was called for and after a little while stopped their complaining and got on with it.

As always David P our chief navigator was ahead leading the pack. It always makes me giggle to myself as we snaked our way out of London with all the party animals just starting their night of fun as we fly past.

On the event's page for this ride there had been some fun and games as to a race up the dreaded Box Hill to see who would get up their first, I just piped in whoever gets there first to make sure they got a Air Ambulance at the top for me to help me recover from the many heart attacks I would have in going up this infamous hill.

As always I was behind my cycling partner Mr. Orange but I have to say it was even worst than normal. His new rear light, the MetroFlash was so damn bright it was actually burning the backs of my eyes. Even so often I would catch the full beam and it would blind me for a few seconds. My next purchase I think for all these night rides as its as bright as HELL and then some. For £11.99 its a steal (Just looked on Amazon at the price as gone up, but still worth it)

We would regroup at times but I had to say I thought I was holding my own for the most part, as always any hills that turned up I would slow down a little but I kept focusing on my cadence, breathing & kept the faith.


Off we went again into the darkness of South London heading towards Box Hill. Soon the traffic would be dieing down and the city lights would fade as we got further and further away from London. Soon our big lights would be the only thing lighting our way and I have to say the CREE light did a excellent job. One of the best £17.99 I've spent and recommend it highly.


As we snaked out way out of London you could feel the temps starting to drop but I was actually starting to heat up so I unzipped a few arm holes for more ventilation. A few commented at a couple of rest stops/regroups they could see steam coming off me. See ladies, I'm HOT stuff baby, YEAH!!

A few miles out from Box Hill we regrouped at The Cock Inn. Yeah I giggled too but not for long as I heard that there was a couple of hills coming before Box Hill. It was time for me & BumbleB to get our game faces on.
As always Laurence G's advise was ringing in my ears. Keeping my cadence high and breathing in time with my cadence I just kept my legs going at a good pace, kicking down a gear at times if needed and not looking for the top of the hill. This last thing wasn't much of a problem cause in the darkness I couldn't even see the top even if I wanted to. 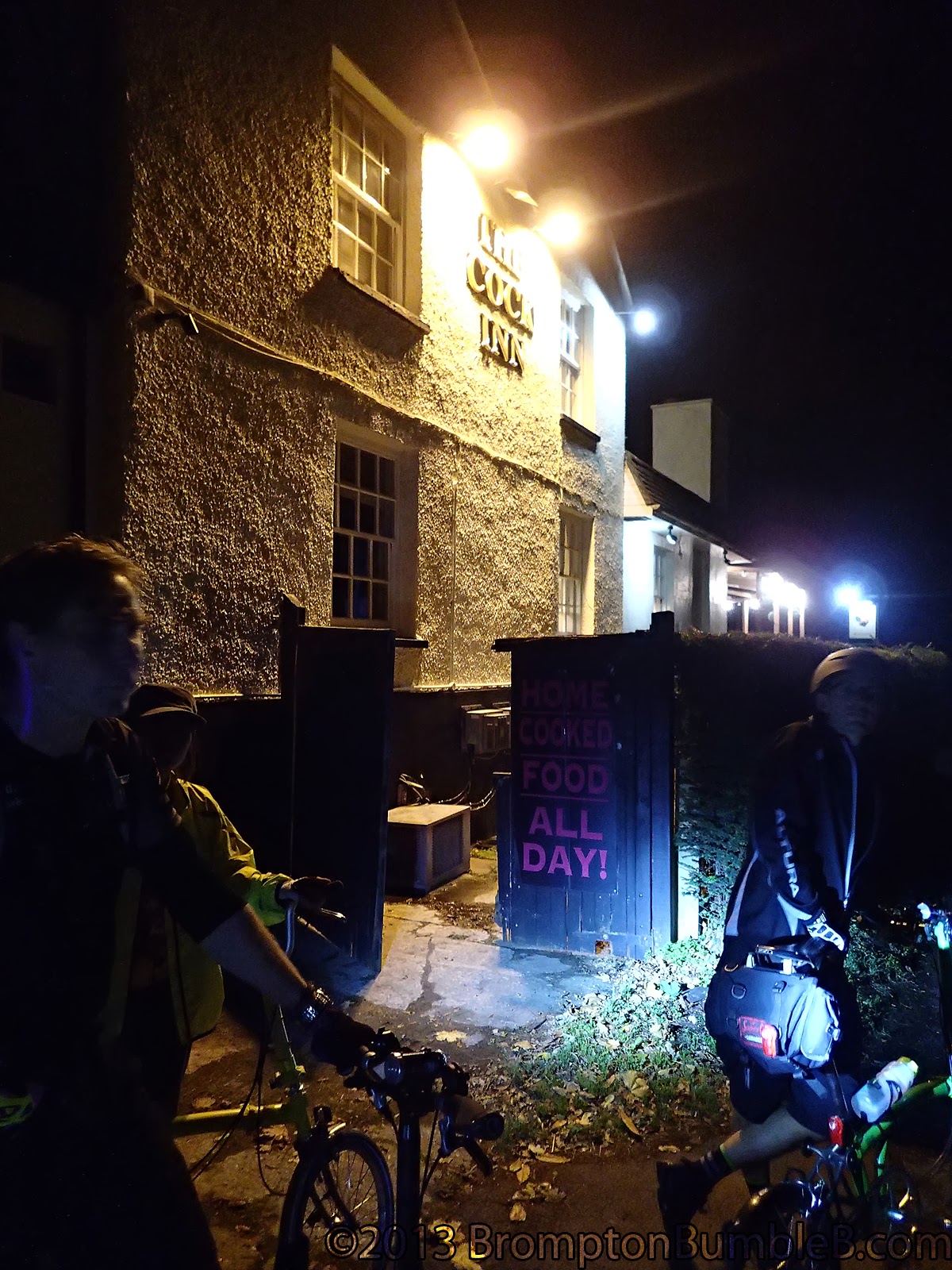 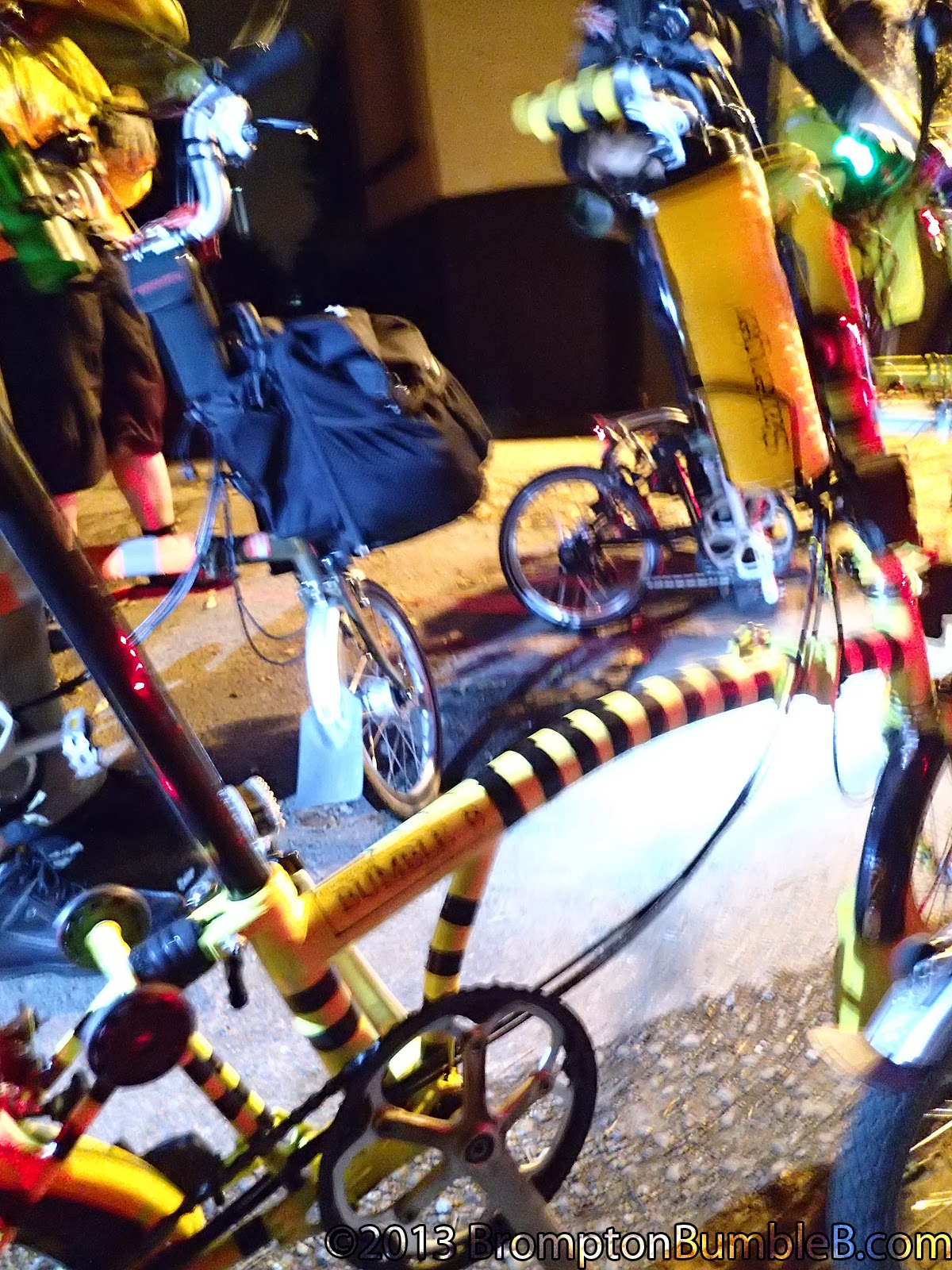 On the way I almost missed the turning for Box Hill I was so focused on the down side of the hill just beofre Box Hill. But when I turned up at a round about I thought to myself

Turned around and headed back up the hill I went down, Finally seeing Ann P waiting for me at the turning I was grinning alittle. She did say she was screaming after me to stop as I missed the turning but with the wind whipping past my head I didn't hear a thing.

Head down, cadence 70-80, controlled purposeful breathing. I did stop a couple of times but mainly to take photos of the road markings but very briefly. 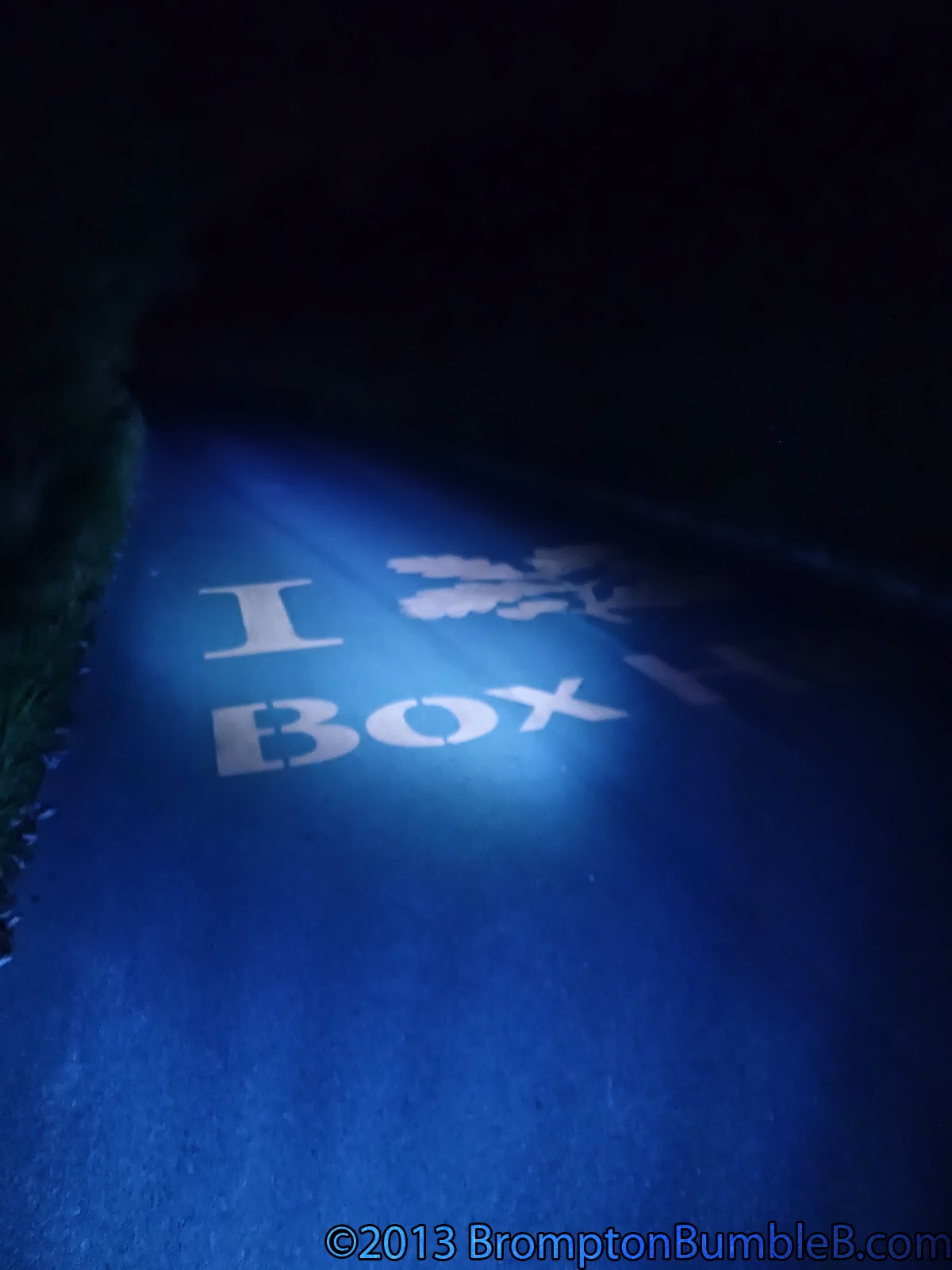 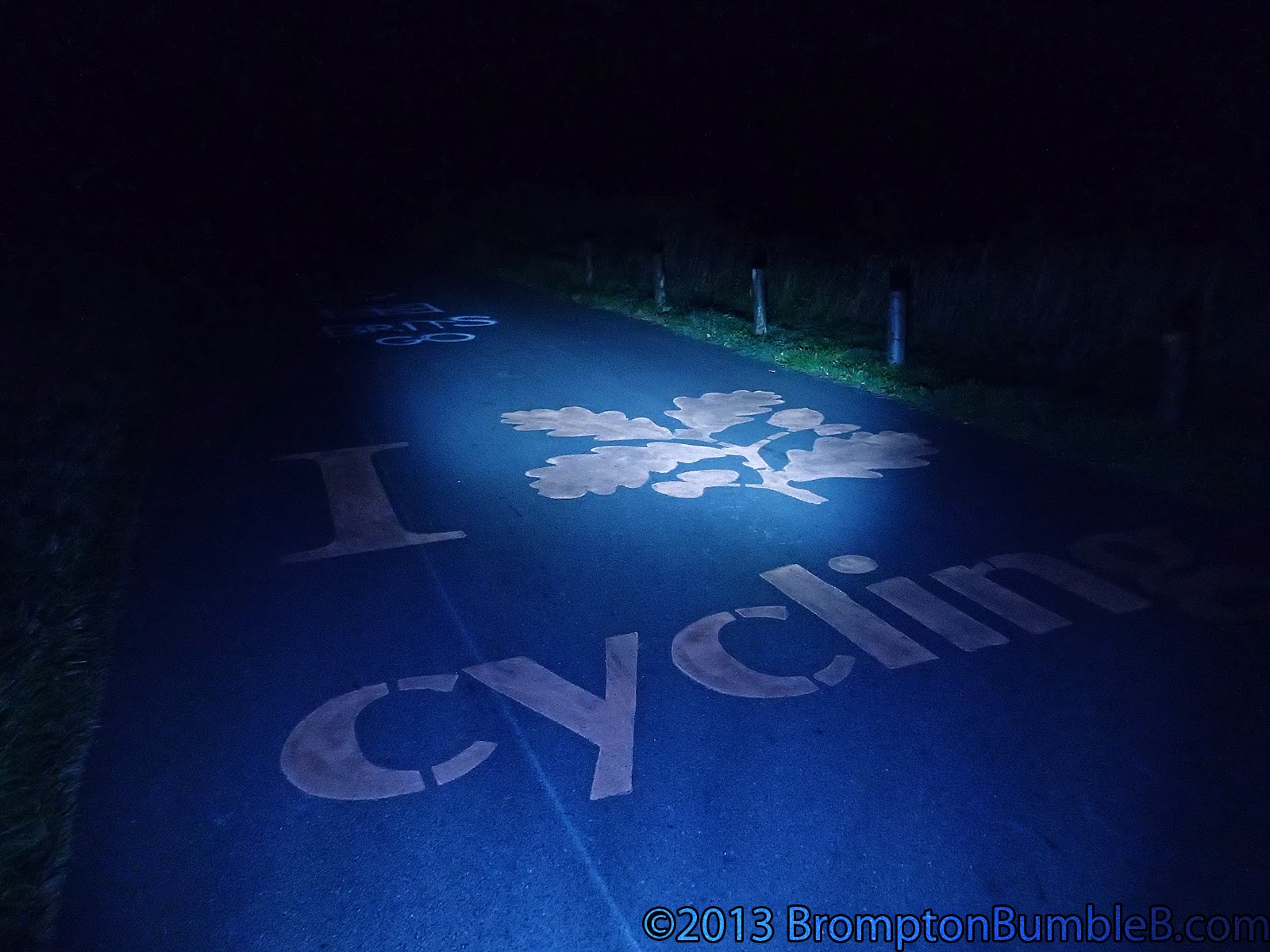 The thing with Box Hill is that its a winding road up the hill so you had to keep your eye on where the road bent around. When it did bent the incline slightly reduced which gave me abit of of time to catch my breath back without stopping until the road straighten up and the incline came back.

I have to say Box Hill wasn't as bad as I thought it would be, compared to all the other big hills I have been up its kinda tame.

At one point it did get a little steep for me and I have to say I did jump off BumbleB for about 50yards.

I mentally gave myself the BIGGEST slap going as I knew it wasn't as steep as other hills and knew I could do it. Jumping back on BumbleB with renewed anger I powered up Box Hill. I did see a view of the city when the trees parted but I was so angry with myself for stopping/walking earlier I punished myself by not stopping to take a photo of the city lights. I didn't deserve it

Not long after I could hear a few mopped bikes reving up ahead as some youngsters where playing about. I paid them no mind and just breezed though without even looking up. Finally I could see lights up ahead & started to hear country western music and knew I was getting pretty close to the Smith and Western wild west themed pub I'd heard about.

I could hear the country music getting louder and rolled into the car park. abit out of breath but I'd made it. A few party goers where standing on the pouch of the pub and saw me and smiled. I think with the others ahead of me they knew I was part of their group and made a hole for me to get in after I folded BumbleB up.

Got in and looked around some, I have to say its a great looking place, even with saddles at the bar and lots of other western type furniture around.

As I sat down I heard news that my partner in crime had a serious failure of his chain. From what I understand the Magic Link in his chain somehow came undone at the bottom of Box Hill and had to walk up the whole thing. I know he always looks forward to hill climbing, I think next time he will be taking a few spare chains and chain breaker tool. 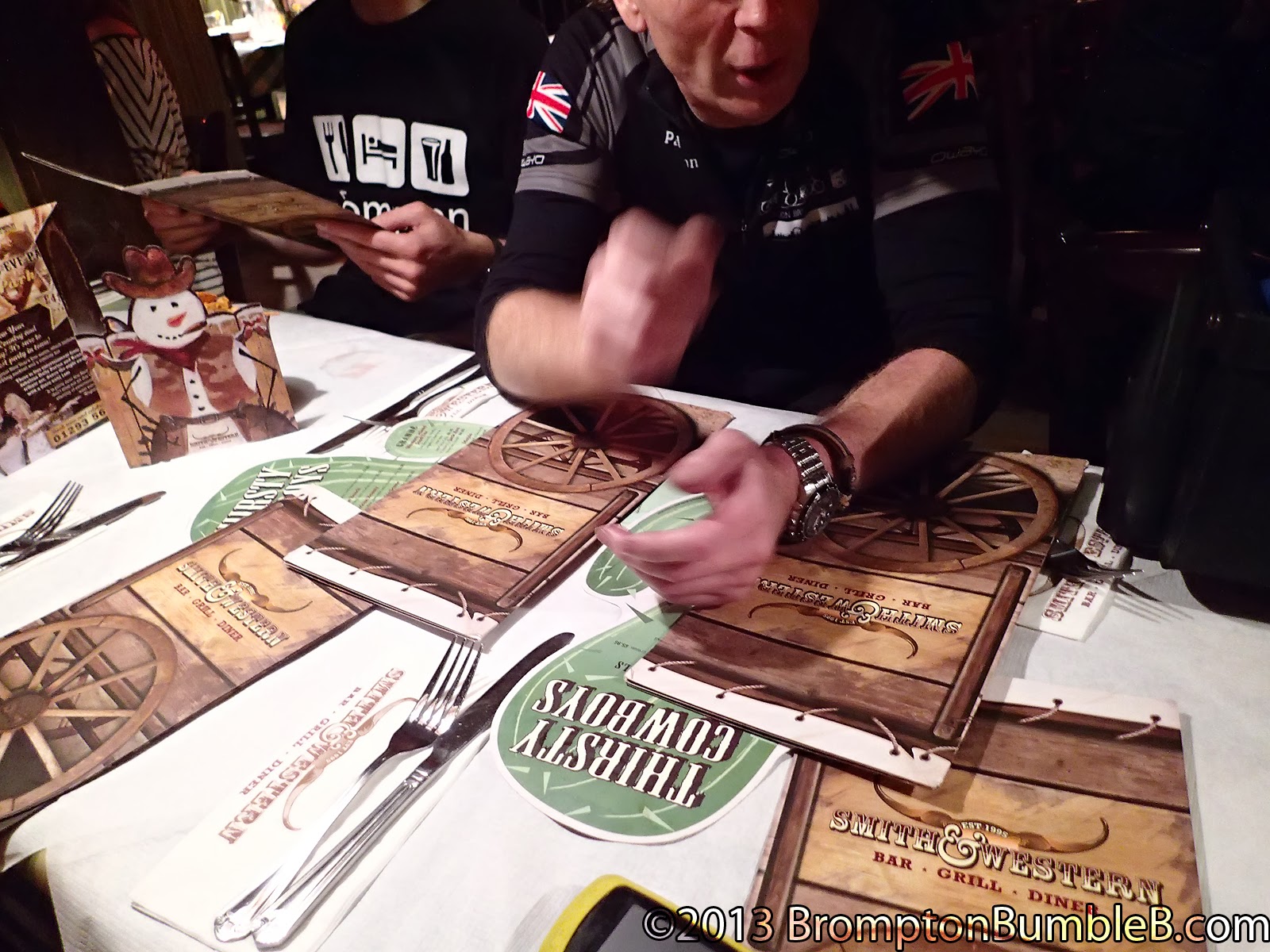 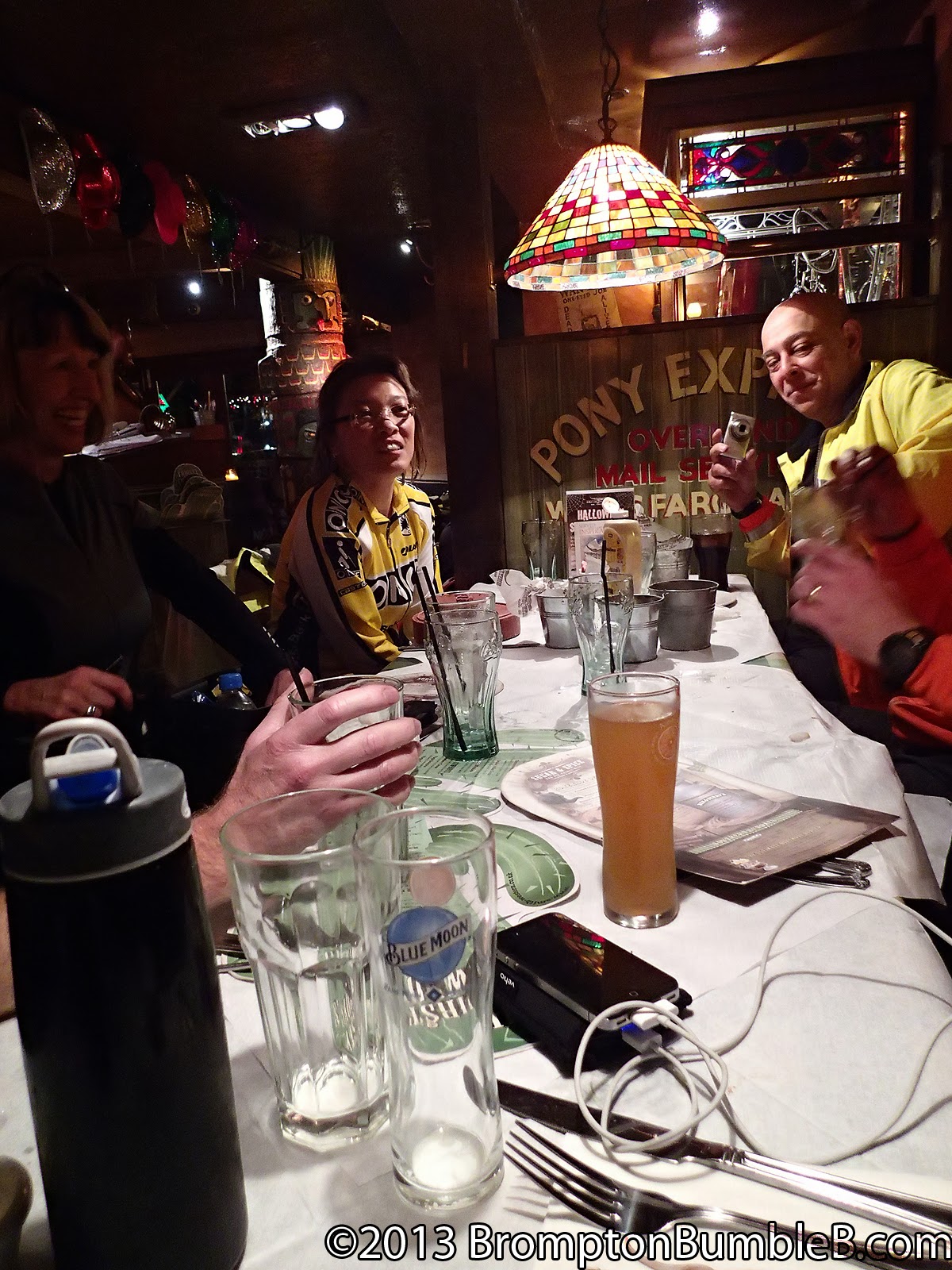 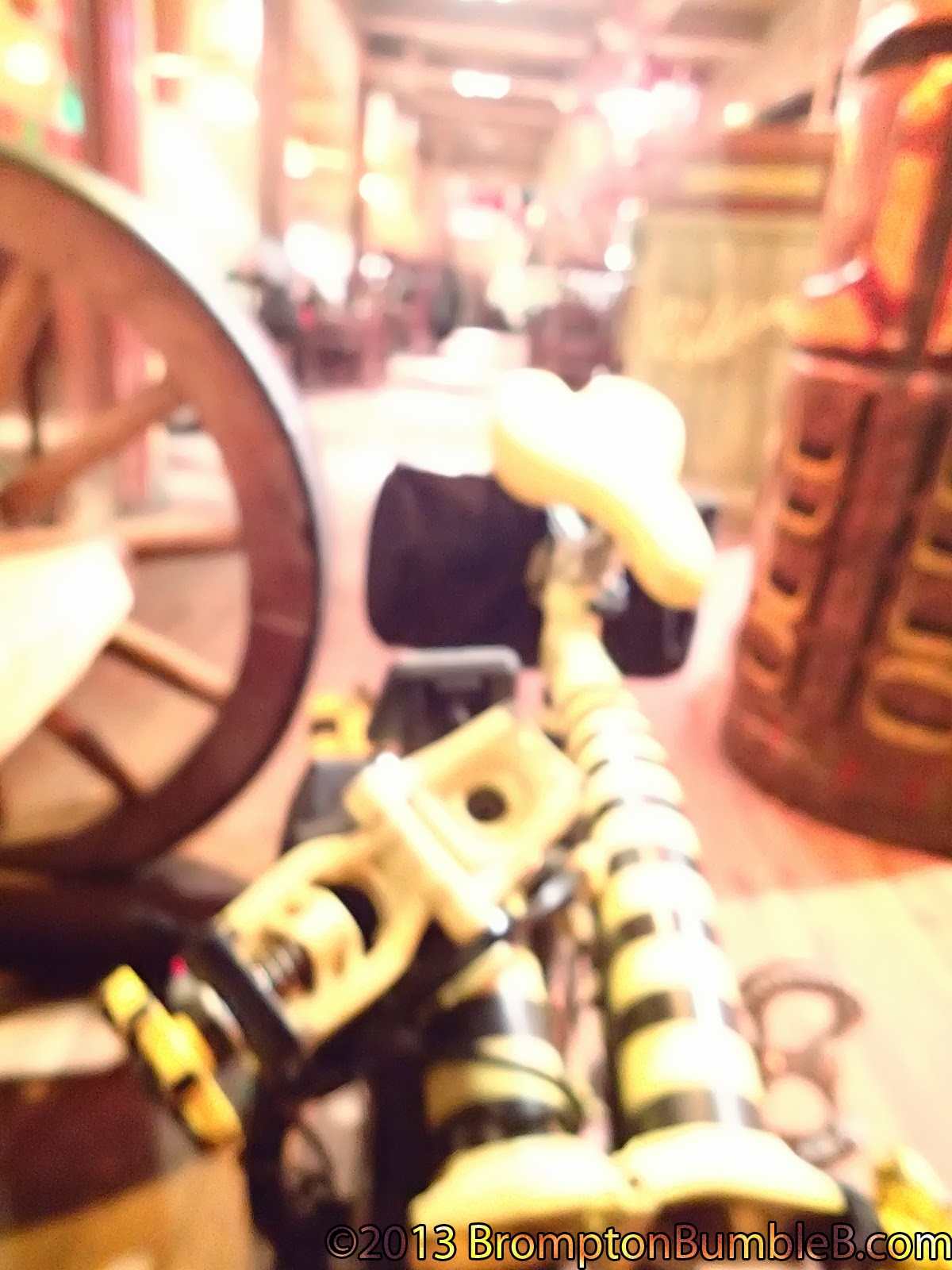 After our dinner break we had to say goodbye to Orange & Robin. Robin had done a damn fine job in keep up with us as much as he could but the hills and then finally Box Hill finished him off and felt he couldnt make it back to Kew Gardens. Orange couldn't continue as we didn't think it would have been safe to patch up his chain enough so they took a taxi home :( Onwards for the rest of us though.

We had a good run back towards London other than me, Ann P, Jenny H & Mark W getting a little lost. Lucky that we was basically going back the same way we came we finally managed to get near the bridal path we came though earlier. Some how we had got ahead of David P & Adam who had sped off ahead but where waiting for us but never showed up as we went on a little diversion.

We decided/told to ge to the other side of the bridle path and wait for them to catch up to us. Time was getting pretty late and Mark W had to leave us as he was working in a few hrs.

After we all joined up again minus Mark W we sped off back to the big lights of London and to where we had parked up our motorised steeds. It was pretty damn late and earlier I offered to take Jenny H home as she was in my direction so we all packed up our B's said our goodbyes pretty quickly and heading to North London. Dropped off Jenny H about 02:00hrs and got back to The HiVE just before 03:00hrs

I'd like to thank David P for his navigation &organizing this ride as well as everyone that managed to come along.

As always my ride data on the following link