Today was billed to be the hottest day of the year so far. 28C (82F) in London. The iBikeLDN: River & Picnic Ride had ordered up the perfect weather

Rode in from my place & made it with about 5 mins to spare. Once again was met my fellow members of the London Brompton Club as we always have a good turn out for these things. Greetings & hugs where exchanged


For a change for someone to take a snap of me. Most of the time I'm behind the camera.


Entering Brompton Cemetery. This is NOT a place where Bromptons come to die like some have commented. Bromptons never die they live forever. 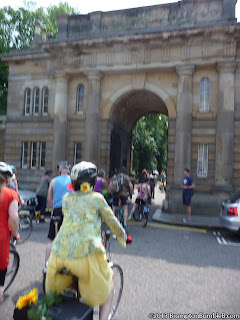 We've been though Brompton Cemetery a couple of times in the past and its always nice ride though. 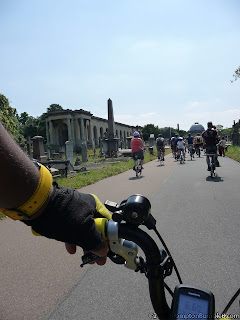 Surprised to see this guy taking his birds for a walk in the sunshine. I was surprised at how BIG the birds actually are.
Crossing over the Thames we caught sight of probably the UGLIEST building I've seen in a long while.
We always causing abit of a bike traffic jam going into an underpass. 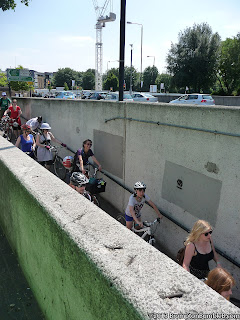 Once again heading along The Thames river heading towards Richmond Park, passing the many rowing clubs along the Thames. We did have a pretty long pause as I think someone further back had a puncture but we was in the shade of some trees which was very welcomed on this hot weather. 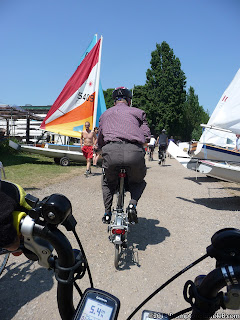 Finally heading into Richmond Park where ALOT of other cyclists in training etc. The final stop was going to be at one of the carparks with abit of a cafe & toilets. Lots of green grass around so many folks had bough with them picnic stuff and set about on the grass near by. We where not the only ones and was actually pretty hard to find a spot under the shadow of a tree. 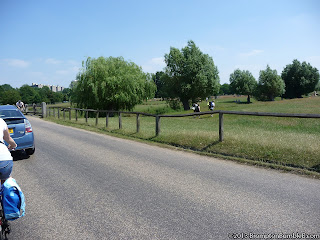 After a little awhile a few of the hardcore where gonna go on a circuit around Richmond Park I personally decided it was just alittle too hot for that which the sun beating down directly overhead and relaxed in the shade having a good chat.

Decided to head back home via the London Overground train and just as we was leaving Richmond Park I found a family member sitting on Bumble B.

Being a kind hearted soul I tried to help the little fella on his way but he wouldn't move, even shaking pretty hard he didn't want to go. I think he was waiting for me to take a photo before buzzing off cause as soon as I took this shot he took off.
After leaving Richmond Park, our little gang decided to head down Nightingale Road which is a 25% gradient road. We love going DOWN this road but we've never been up it. I think next time we are in the Richmond area we will attempt going up especially now with the 6 speed upgrade.

Once again a WICKEDLY AWESOME ride with the folks from iBikeLDN with perfect weather.

Check the iBikeLDN on facebook or the iBike London website for information on the next ride. Normally every month.
Posted by Brompton Bumble B at 19:00