After not feeling up to doing the Dunwich Dynamo XXI over the weekend and my cycling partner OrangeBrompton being slightly injured and not doing the same event we decided to do a little light training around Hyde Park on Sunday.

For once I was dead ontime for once (GASP) so had a little time to take a couple of snaps at our meeting point.

When Orange finally arrived we didnt really have anything planned, we did a couple of circuits of Hyde Park and then heading towards St. Pauls going over the Millennium Bridge

At this point we hadn't seen that many people around in London. It was still relatively early and being in the banking district of London most of it was shut down. In the week the same area is pretty crazy with traffic and office workers going about their business.

Feeling a little hungry even though I had a good porridge breakfast before leaving we headed to what is becoming out favourite haunt Look Mum No Hands on Old Street. If you get the chance please visit as the food is great, healthy and very cyclist orientated. Even got a little workshop where they can work on your bike if needed.
After my 2nd breakfast we headed back into central London's banking district as the traffic was still pretty light. OrangeBrompton wanted to visit The Gherkin before we called it a day. There is always something interesting to see & photograph in central London.

After we hanged around the gherkin taking photos for a little while we decided to call it a day. We said our goodbyes and headed in opposite directions. I did take a couple of shots on my way home as the traffic was still light and not many about. 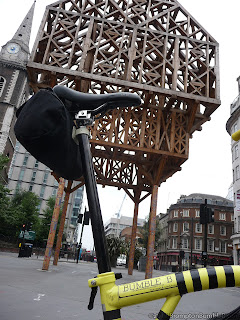