Today was the day of another great ride with the London Brompton Club clan.

"Tweed themed easy ride celebrating a number of members 40th birthdays this year- culminates in a Sausagefest after at Steins, Richmond, with (probably) 40 sausages.......And cake !"

I don't have much tweed, ok tell a lie I have NONE at all but this wasn't a prerequisite to attend the ride. But I thought I'd push the boat out a bit clothing wise. Yes dear readers I broke out the ironing board & iron. Hell I didn't even know I had one. You know things are deadly serious when I do something like that, I was actually scared. Well I didn't burn the house down or burn my shirt.

I also had my yellow vest that I had been saving since the last Brompton World Championships when riders had the option of not riding with jackets due to the hot weather.

Upon leaving the HiVE, I could see it was going to be a great day for cycling with my fellow Bromptoneers and I did catch my reflection in the mirror and thought

While commuting to my local station I did notice a few people turning their heads to get a better look, embarrassing I know :P

Arriving at The London Eye, I was greeted by smiles from old friends and new friends. Everyone had dressed to impress where they could.

Samantha has been busy working on a little gift for some of the riders for today's ride and I got this cool custom one of a kind Bowtie :D
I have to say I TOTALLY love it, Thank you Samantha :)

After a quick briefing from David we was on our way, with this being London there was alot of traffic and we lost a couple just before Trafalgar Square but we managed to get back together mad take a quick group photo.


Off we went towards Hyde Park Corner but there was alot of police & barriers all over the place. There was Vitality World Triathlon going on  so we had to work out another route. While we was waiting a few of the officers where very interested in our little group and have never seen so many Bromptons in one go. 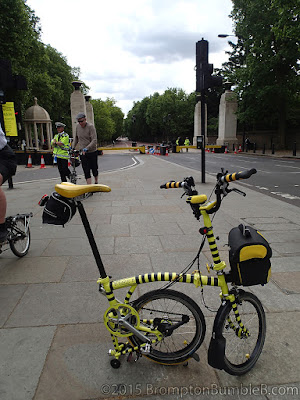 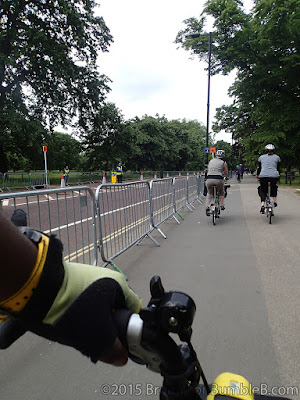 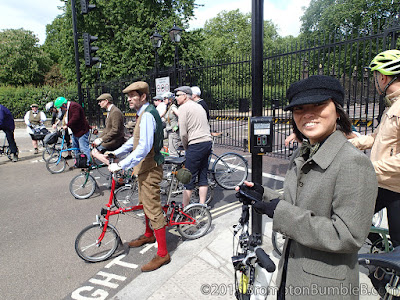 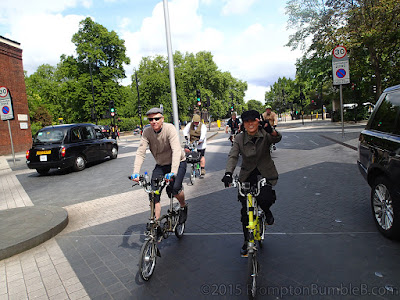 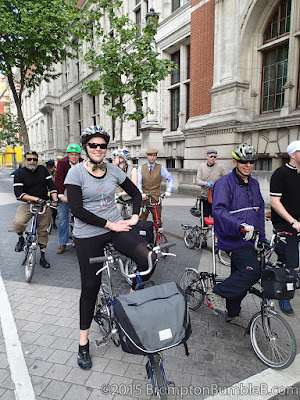 After we crossed Battersea Bridge we made a quick stop at Phoenix Cycles. I asked David if we could stop by as BBB needed his recent wheel rebuilds double checked, just to make sure the spokes had settled down properly. Harry at Phoenix Cycles who had done the awesome work on BBB was happy that the spokes where settled and all good to go. I knew that already but always good to get an expert opinion just to be on the safe side. 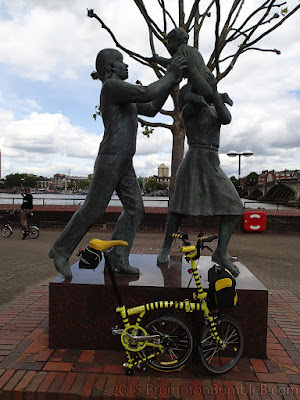 Not too long after we left Phoenix Cycles, Graham caught as up with big smiles. 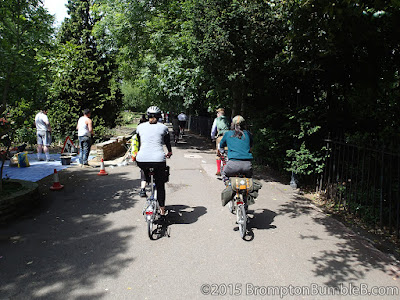 Soon after we entered Bishop Park Brian had an accident and quiet a serious one as it turned out.

Basically alot the path there are big bumps where tree roots have forced though the tarmac and produced quiet big bumps and if your not prepared for them they can catch you out and you take a tumble.

Brian had fallen and taken the full force on his hand, wrist. It was hurting quiet abit but he was more worried about his Brompton. We thought it would be best to call emergency services to come and check him out, when we knew an ambulance was on its way we decided to continue with the ride with Brian's blessing. Anna stayed with him to make sure he was alright. It later turned out he had actually broke his wrist and its now in plaster, get well soon buddy :(

The rest of the group cycled onwards towards our goal of Stein's for some well earned food and beers. 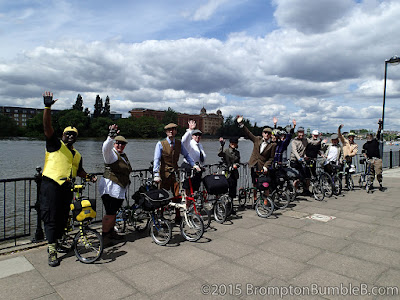 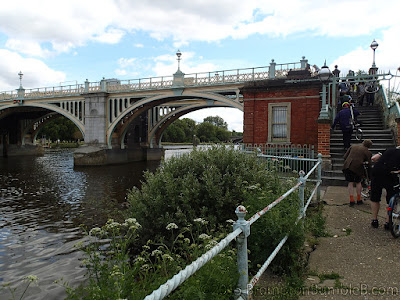 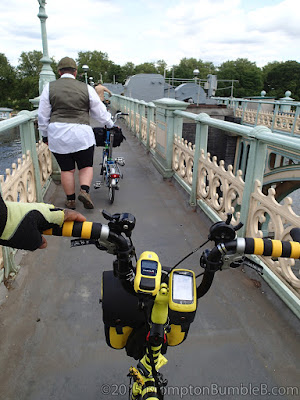 Finally we was Stein's where we got a little surprise of a couple more Bromptoneers where waiting for us namely Chris B & Andy L. And as you can see Chris B was dressed to impress ;) 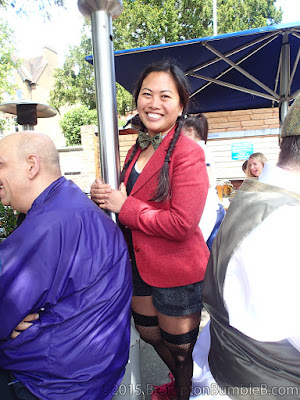 As you can see the girls got into the party mood as we was waiting for our orders of food and of course BEER.
and this craziness was BEFORE they even had any beer, I know bonkers but we love em. 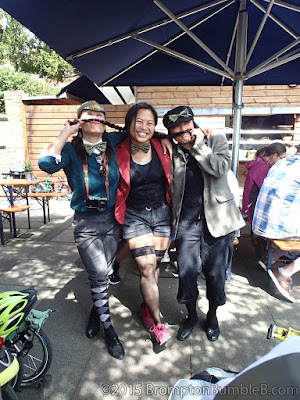 I decided not to go all out this time round and just ordered something pretty tame that I could handle with ease. Got to try and watch my waist line you know.

Now I’m not really a beer drinker so I opted for this Beer & lemonade combo and I have to say it was pretty nice and refreshing. Perfect after a good ride.

and of course there was a dessert. Once again I opted for the Apple Strudel with cream & ice cream which was nice but could have been ALOT bigger but that's just me I love my desserts :P
Another great relaxing ride with my LBC buddies as always and here is the ride data for all those that love all that data stat stuff :P