Yesterday I turned up for work but found out that I had the weekend off. I was early enough for me to be able to get home, changed and do the LBC Gravesend Loop ride. As I left work I was in 2 minds whether to do the ride as I have a "preparation" for a ride that I do. By the time I got home I had a few messages telling me I should go on the ride so I had a hearty porridge, got dressed, checked the weather and headed out from The HiVE at lightening speeds, probably breaking a few speed limits in the process.

I was so much in a rush that when I left Waterloo Station I was putting the power down as I didn't want to keep the others waiting. This meant I was "coming in HOT!". I had visions of a fighter pilot being waved off landing on a aircraft carrier as he was coming in to fast. I could hear the flight controller say, "Wave him off, wave him off, he's coming in to hot!"

The legend was on final approach.....

I made my approach it was way to late for me to be "waved off" so I did the only thing a legend could do, a long skid. I didn't calculate the traction of the surface or lack there of and as I whipped the back wheel around the front also started to slide. I had to compensate with putting my leg down and nearly ended up doing the splits but no one noticed and just thought it was all planned I let that one go & just smiled, glad that I didn't rap myself around the nearby tree & kept myself composed, as legends do ;)

Good to see my cycling buddies as always and I was looking forward to a decent ride as it felt that I haven't been on a long ride in ages. 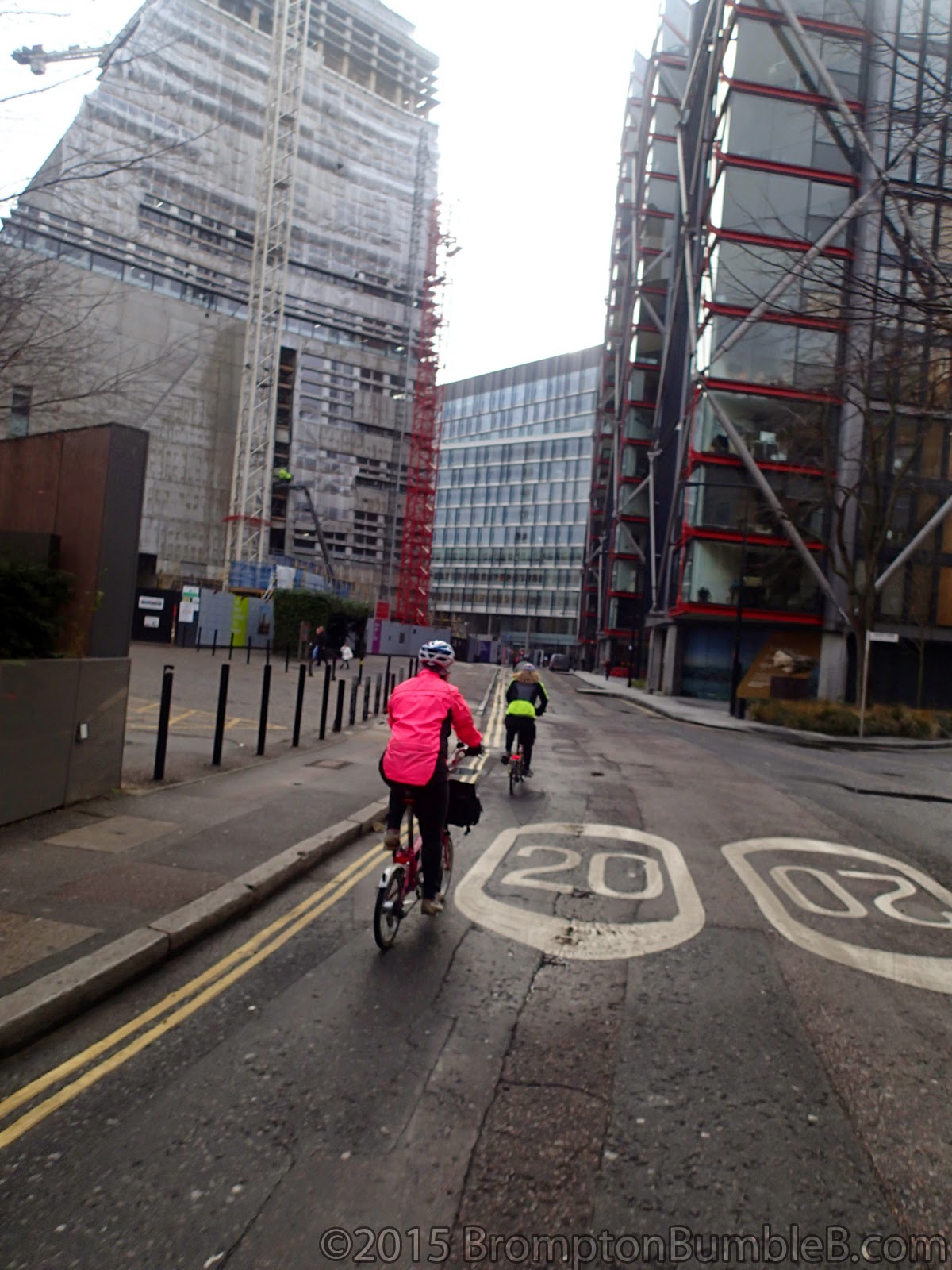 Not to far from our start point, right next to the Transport for London Building we found a CycleHoop in the shape of a heart for Valentines Day.

No matter what ChrisB knows when a camera is pointed in her direction and always got a lovely smile ready.

After a few miles we had our first puncture and ofcourse it had to be a rear wheel puncture. After a few minutes we had Anne's Hotlips all patched and ready to go.


Where we stopped to repair the puncture was uneven so I laid BBB down on his side to make sure he didn't fall over.


As we cycled though we came across more and more sights at have become very familiar to us, no matter how many times we cycle around the Thames we always enjoy the sights and sounds and its forever changing. 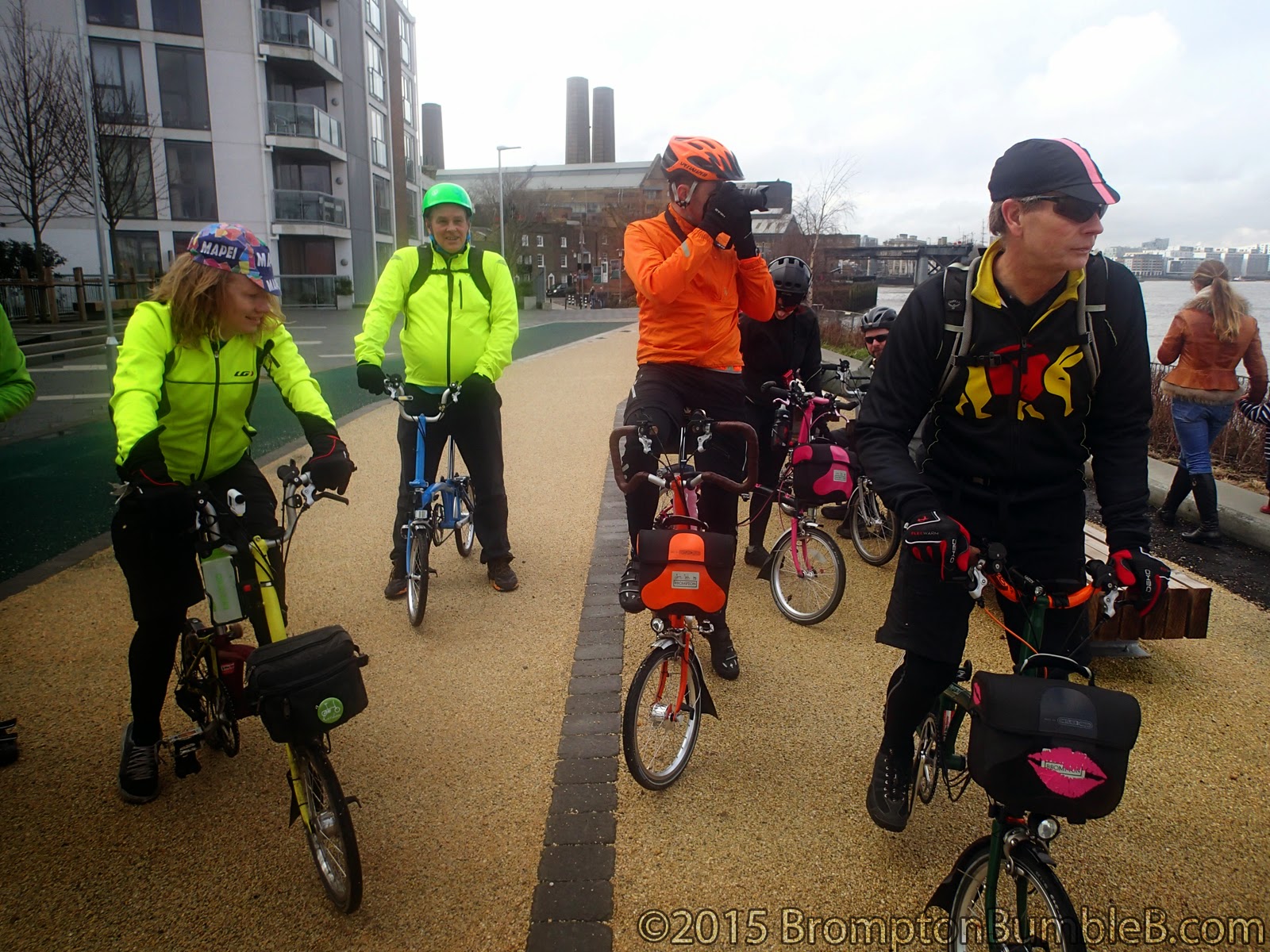 Heading along the industral sites where it was pretty muddy and a lakes in places.

Having made our way to the Thames Barrier we had a little  coffee break and re fuelling. 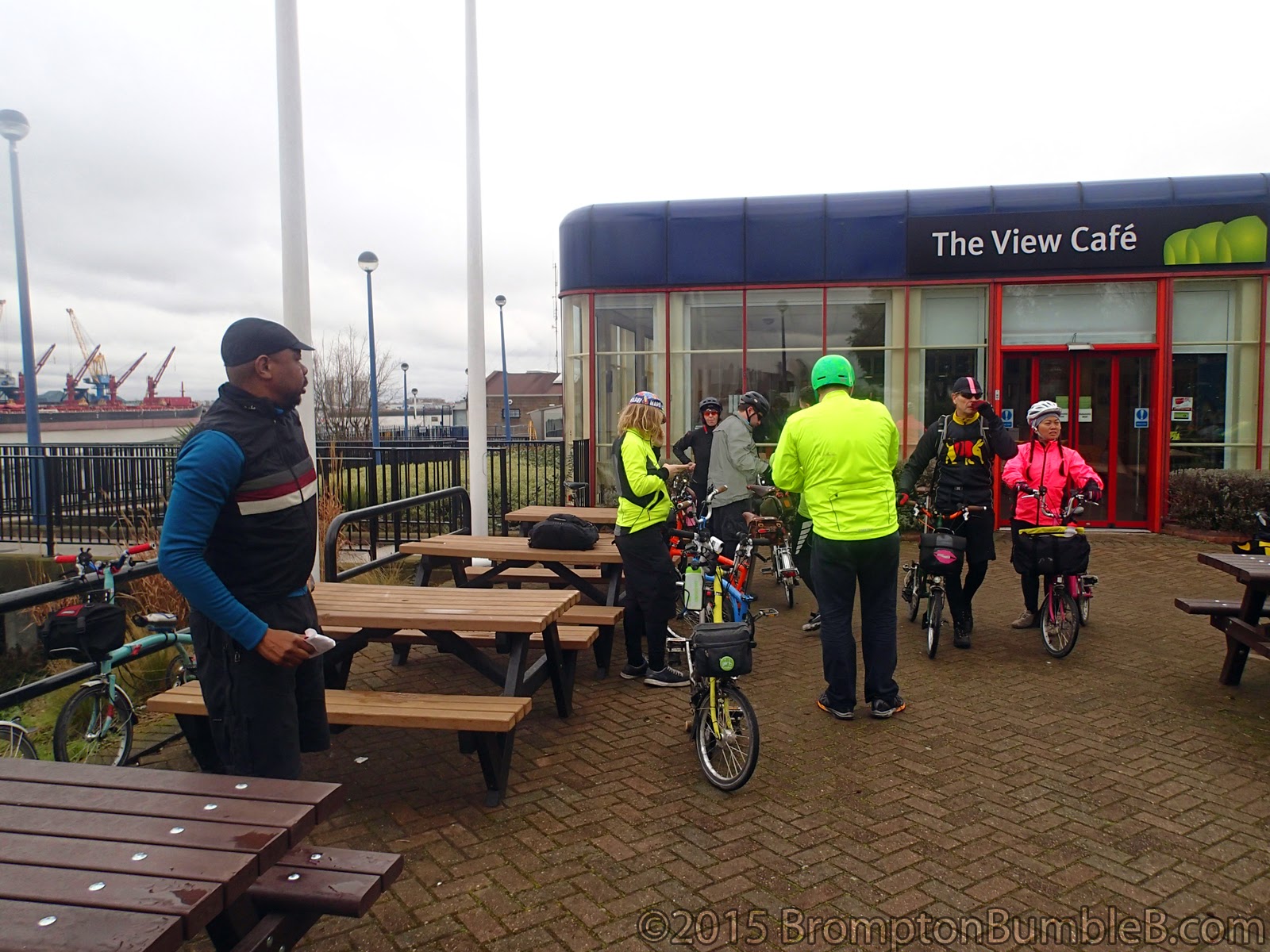 Seeing that I didn't fuel up as well as I should of this morning, I made sure I had something good and filling to keep me going.


There is a very short hill metal bridge next to what can only be described as a cement works a couple of miles down the road from The Thames Barrier. I've been up this little bridge a few times and the trick is to find the right gear and just "go for it" and I sure as hell did. Hell the speed we was going up it I thought we would take off like that famous moon scene from E.T: The Extra Terrestrial.

While we was heading though some of the big parts of the Thames River Path that have heavy construction going on there was a few really muddy paths, in fact I would say the mud was actually cement & a small lakes. It was pretty hard going in places for me to be honest. For me its the muddy, sticky sand paths that really suck my energy badly. It was very tough going and by this point thought about taking the train back to London but would wait til I got atleast to Gravesend to see how I felt.

After about 20+ miles I was feeling the drain quiet badly.This was abit of a low point for me as I knew I was slowing everyone else down. I had put on too many layers as the day was a little warmer than I thought and also the forecast was rain but it seemed we was always ahead of the rain so with my waterproof jacket I was basically cooking. Tony D gave me encouragement and advise me to take off the jacket and waterproof helmet cover I had on so the heat could escape quicker. I do like my Nightvision Jacket but its only really good on serious biblical down pours & proper cold weather. Will be looking into getting something lighter with better airflow in future.

My cycling partner was waiting for me at the top of a short sharp hill on a cycle path, at this point I pretty much decided I was going to head back to London via train as I wasn't feeling to good. As always my buddy lifted my spirits & also mentioned that he would return with me to London by train if that is what I decided to do. I know for sure he could complete this ride with little effort and tried to tell him to carry on with the ride after we got to Gravesend but he wasn't having any of it.

Just after we came down the other side of the hill my partner suffered a rear wheel puncture, the second on this ride next to Ebsfleet Roundabout.

Didn't take my partner that long to fix and me, OrangeBrompton & Graham was on our way again and met up with the rest of the LBC gang a few miles out from Gravesend.

Finally made it to Gravesend, the rest of the LBC gang was heading to the ferry to cross over and cycle back to London on the opposite bank of the Thames. We said our goodbyes and me and Orange headed to the station.

As we was waiting to purchase our tickets a lady was very interested in BBB and asked where we had come from, I told her from the London Eye along the Thames. I don't think she could believe these small wheeled bicycles could do it but that's the thing about Bromptons, there is nothing they can't do.


We didn't have to wait long before out train to Charing Cross Station arrived. I was disappointed with myself for not completing the loop but promised myself that I would do it when its organized again in the summer and take on much more water. 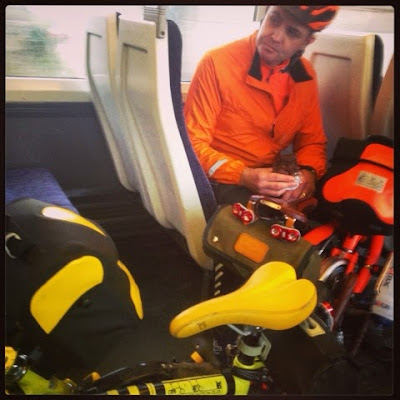 It seems when I took off the cover on my helmet the sun visor part broke and couldn't be put on again. Well it could have been alot worse.


We arrived at Charing Cross station and I noticed that the train did pass right next to the London Eye our starting point so pretty much completed the loop but not the way I had wanted. Just has we got out of the station it started to rain a tiny bit but not much. We cycled together the short distance past Trafalgar Square and part way down The Mall where we parted ways where I would catch the underground train back to the HiVE.

It was a good unexpected ride but very disappointed in myself for not completing the loop. I will make sure I do this ride again and complete it properly when it is organized again as I want to get photos while on the ferry.