The last time this particular ride was on I missed as I had to work (boooooo) so when I heard it was going to be on again me and BBB just had to make sure we was on it.

I had heard of the Fish & Chips that was more than enough reason to make sure I was going for that. Atleast with riding I could stuff my face and burn it off.

The key is BALANCE.

The meeting point was again the awesome London Eye, on the South Bank of the Thames. I never get tired of meeting there as its always busy with tourist and the sights of London right next to it. I left in good time so I rode all the way there, focusing on my cadence and breathing as always. I seem to really be getting it down now as I feel I'm cycling slightly faster but not feeling tired so quickly either. Need to do alot more for the huge rides I got coming in a few months *bites nails*


Our little group numbered 6 this great spring night, David P, Ann M, Mr. Orange, Olufemi I, 5milecyclist, Alex H & David H
We had the great pleasure of a couple of new riders, well to me anyway, David H came all the way from Japan and came to see us off. Next time hopefully he will have his B with him to come riding with us. Alex H was a new face and this would be his first LBC Ride, one of many to come I hope.

Ofcourse we had a few group photos taken and then we started off though the tourist with David H waving us off into the twilight.

As it was a nice spring night the skies where very clear and the temperature was perfect for cycling, a little chill but when cycling you warm up pretty quickly.

Being a Saturday night in the big smoke, as always the traffic was pretty busy but we cut a dash flowing though the traffic in our Brompton peloton. 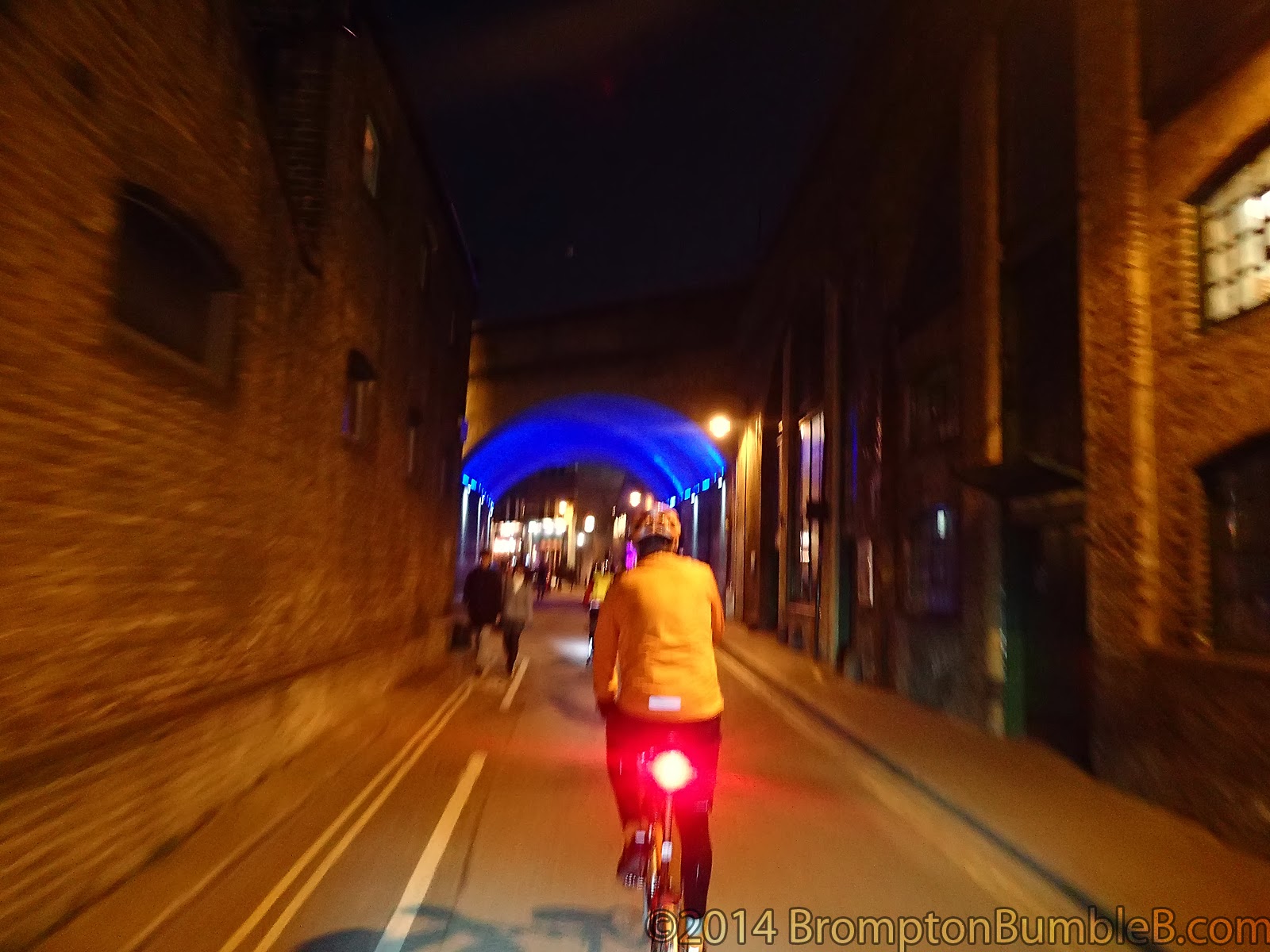 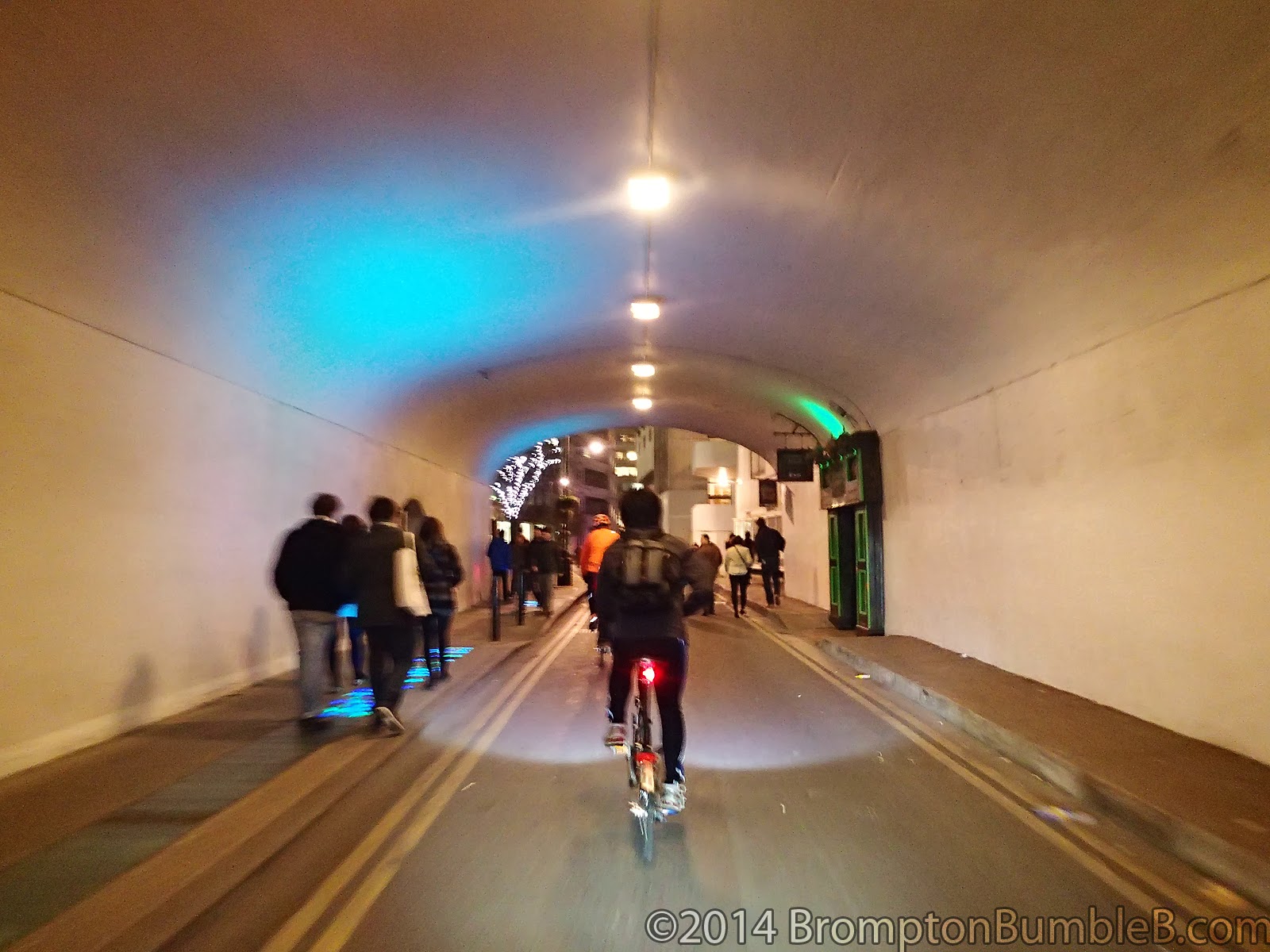 Our first stop which we always do on a night ride right next to City Hall on the Thames River. This time the water feature was turned on and me & BBB was abit silly and started riding though the fountains, timing it perfectly so we didn't get wet. 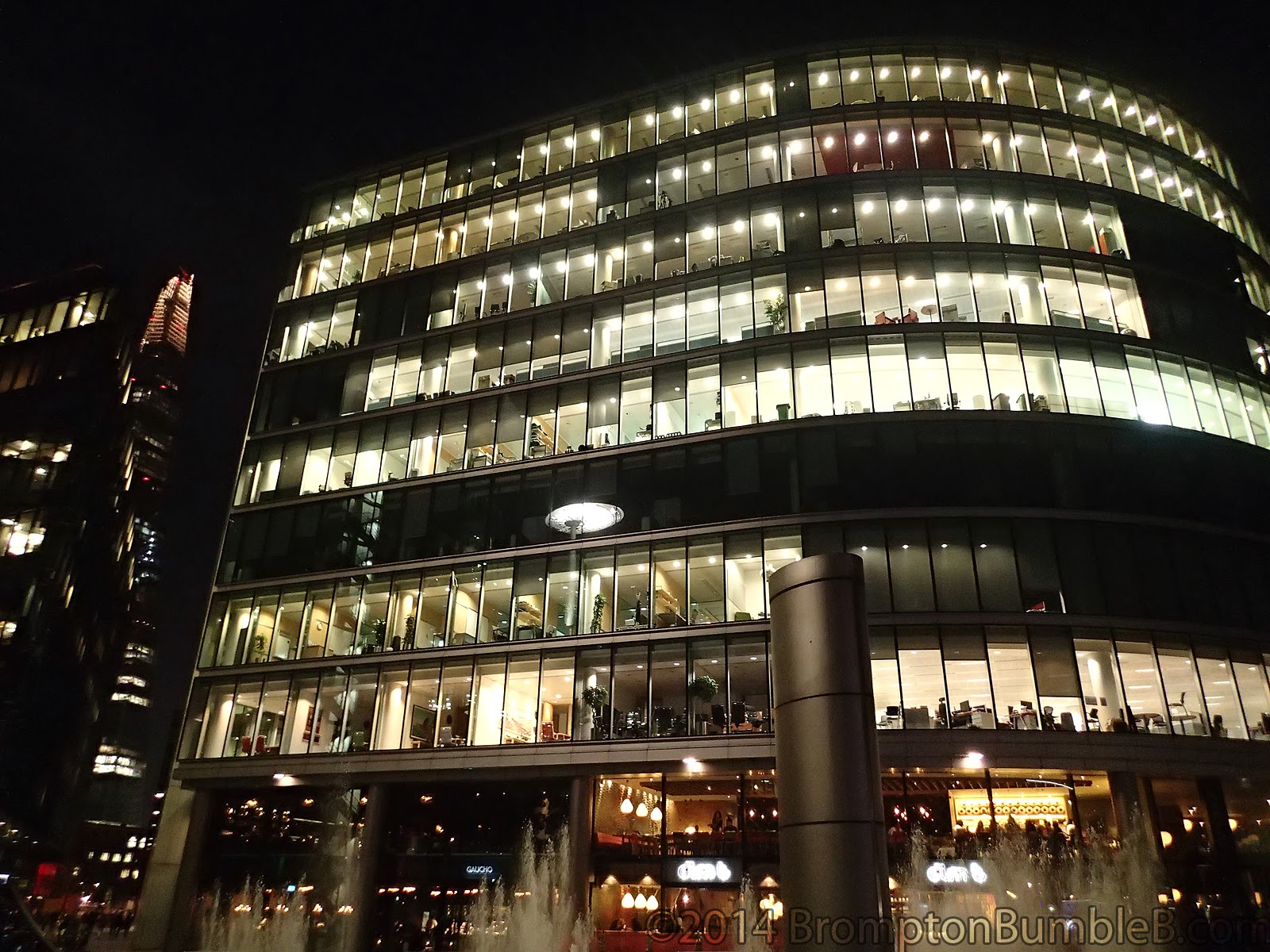 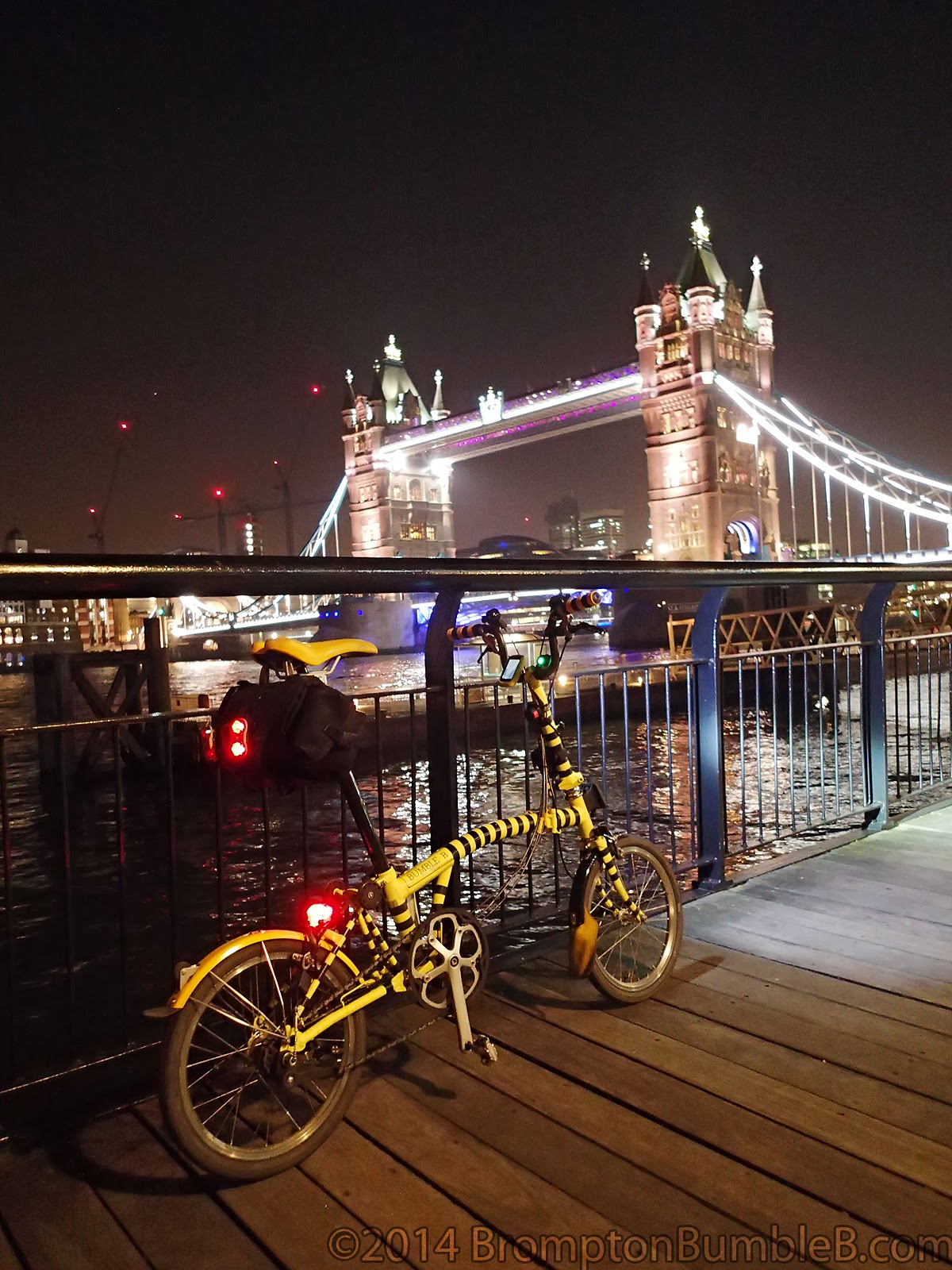 Having had a few photos near the Thames we started to head into Docklands section of the ride, I always like riding thought he docklands esp at night as you get to see the city lights reflecting in the Thames.


As we headed deeper into Docklands to the the parts where all the big money is made. Towering office buildings where million pound deals are made and lost. Where money is something to be used and sometimes abused. 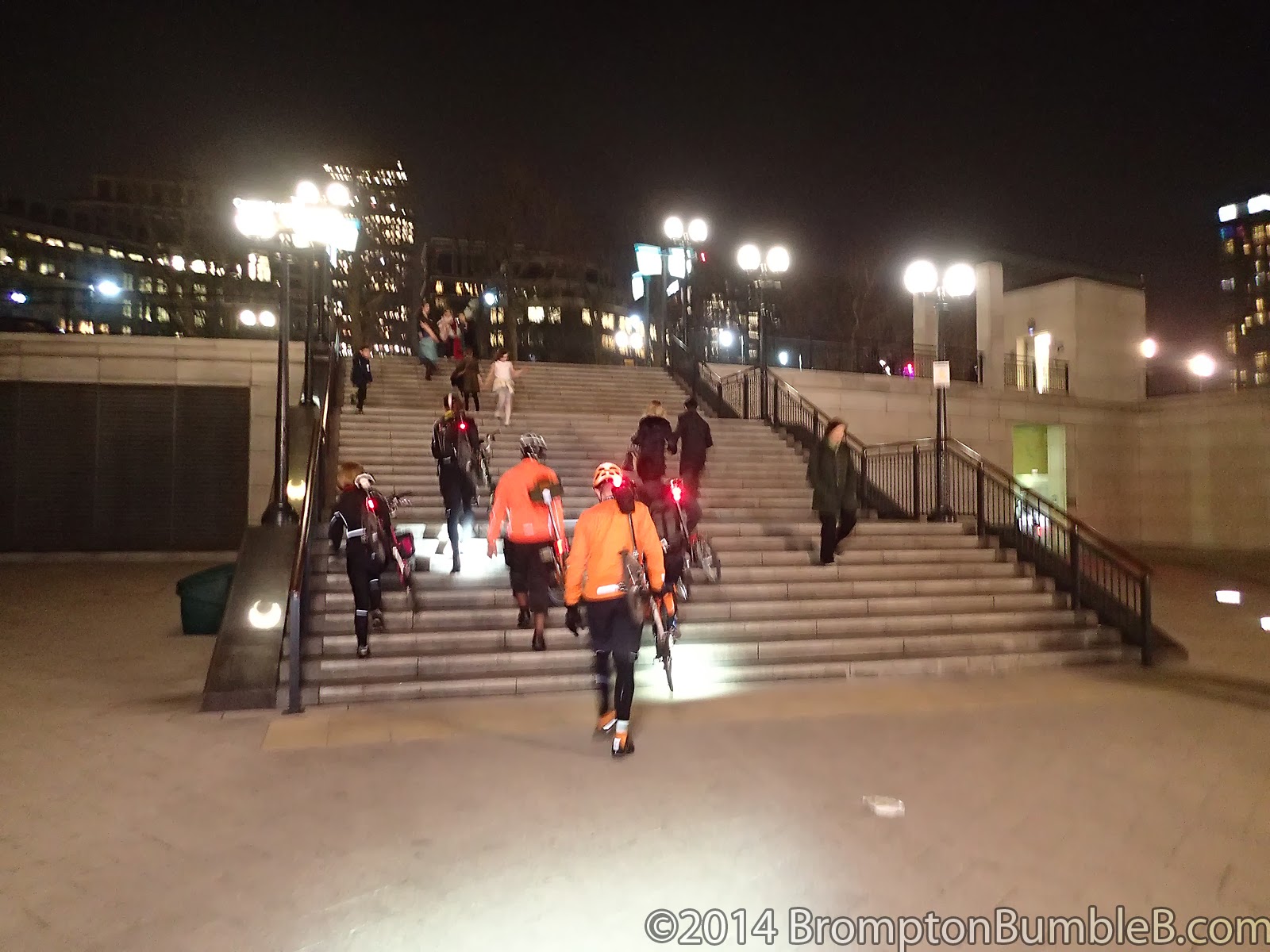 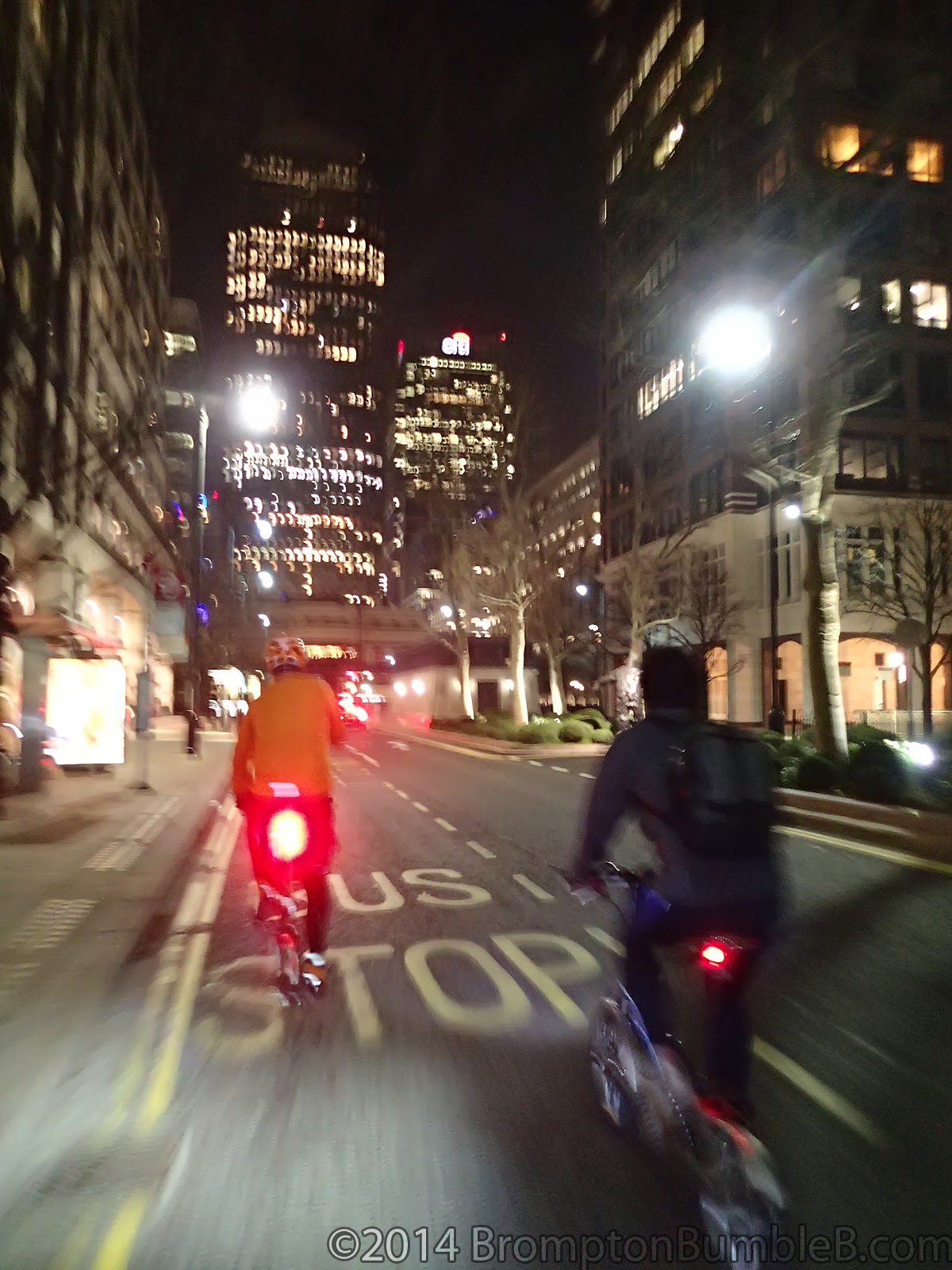 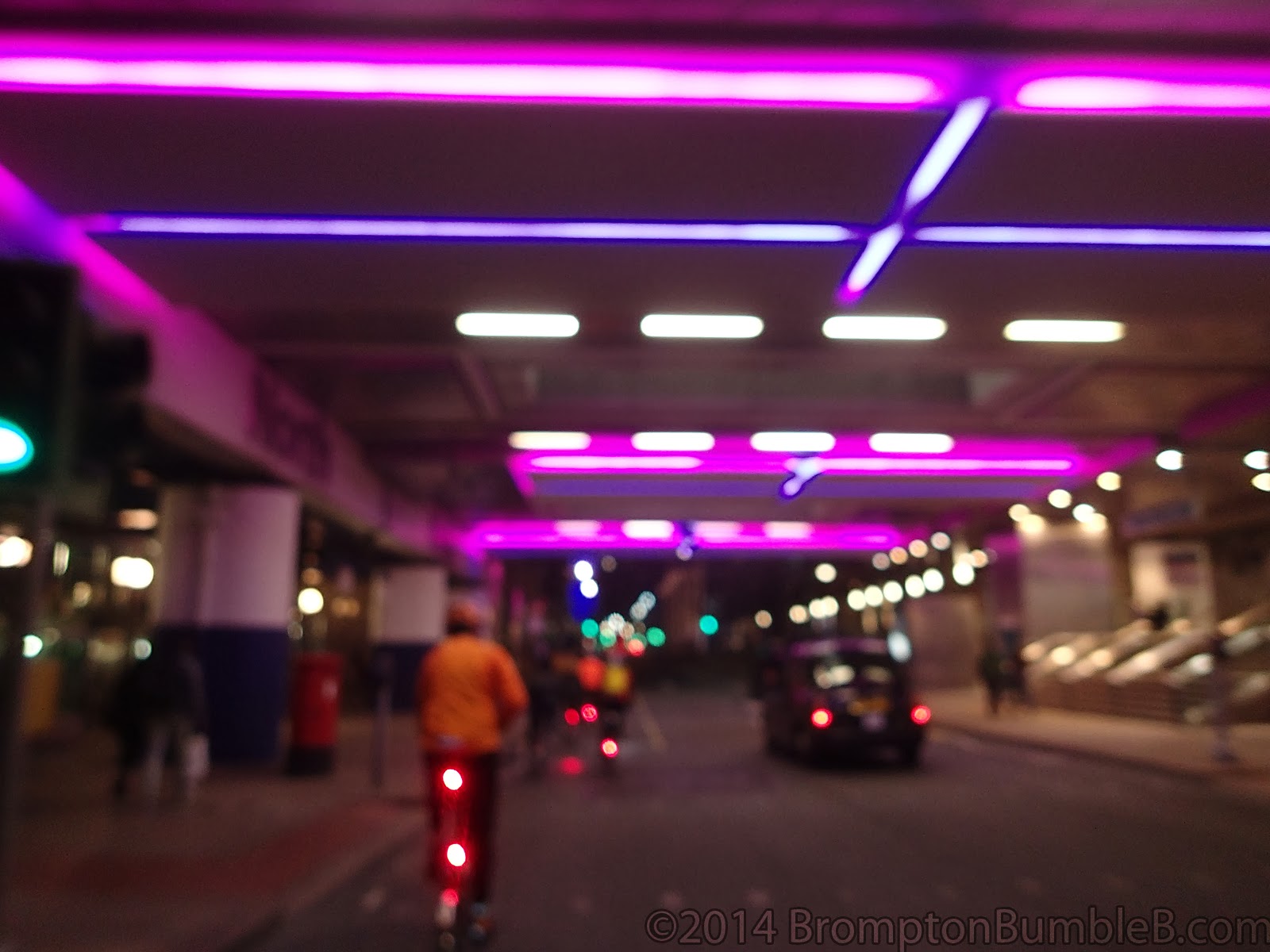 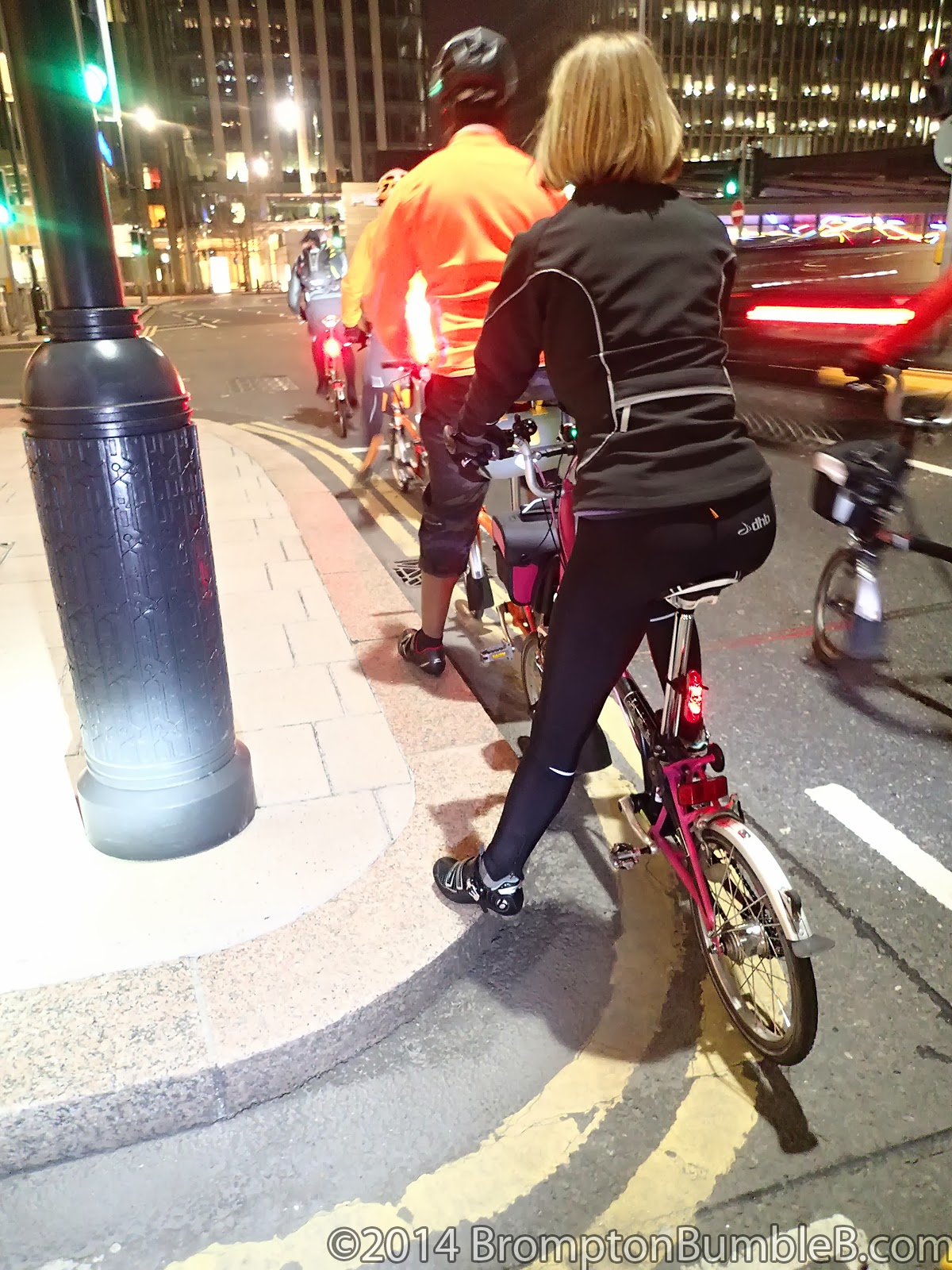 Always something crazy to see in Docklands and London in general to be honest. Now we where heading to our second part of the ride, the small Fish & Chip shop that a few had already been to on the same ride I was unable to go on awhile back. I had heard this place had some damn good Fish & Chips. I wasn't disappointed at all.

With it being in the middle of a housing estate there was a few youths around but manly kicking a football around with each other. For some reason they where kicking it VERY high and atleast once  they had kicked in onto the roof of a building never do be seen again, but 5 min later they where kicking the ball around again.

I didn't actually finish my Chips & Sausage as I wasn't feeling alot hungry as I made sure I fuelled up properly before we left.

While we was waiting for our food to settle down I spotted Alex C's Brompton's stickers. I thought VERY cool and I swear I could almost hear the transforming sounds too ;)
Fish and Chips consumed we started to head back towards Central London. No night ride is ever complete without a a trip though the Greenwich Tunnel under the Thames.

Comming out the other side of the Tunnel as always the Cutty Sark was there to greet us. 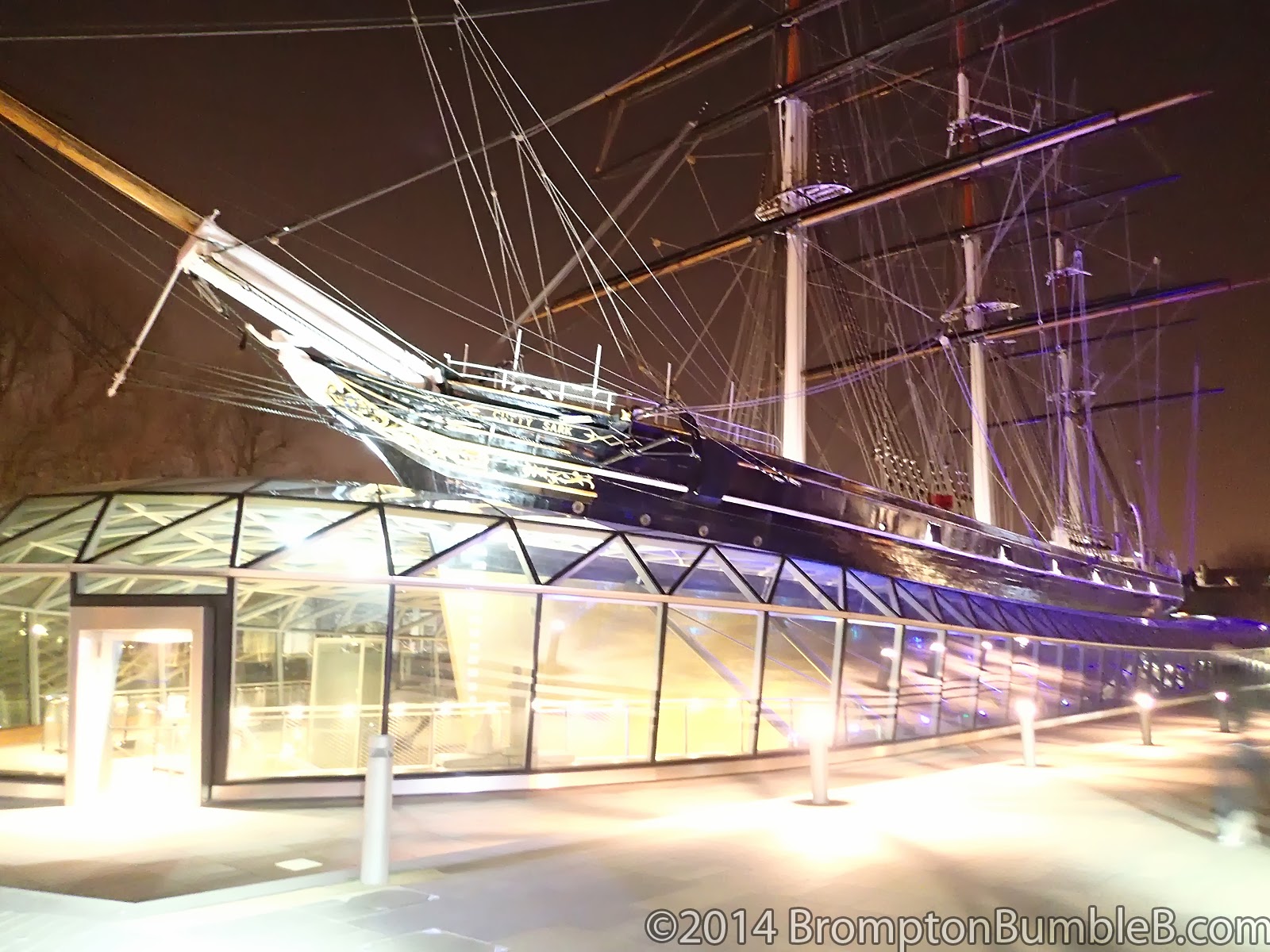 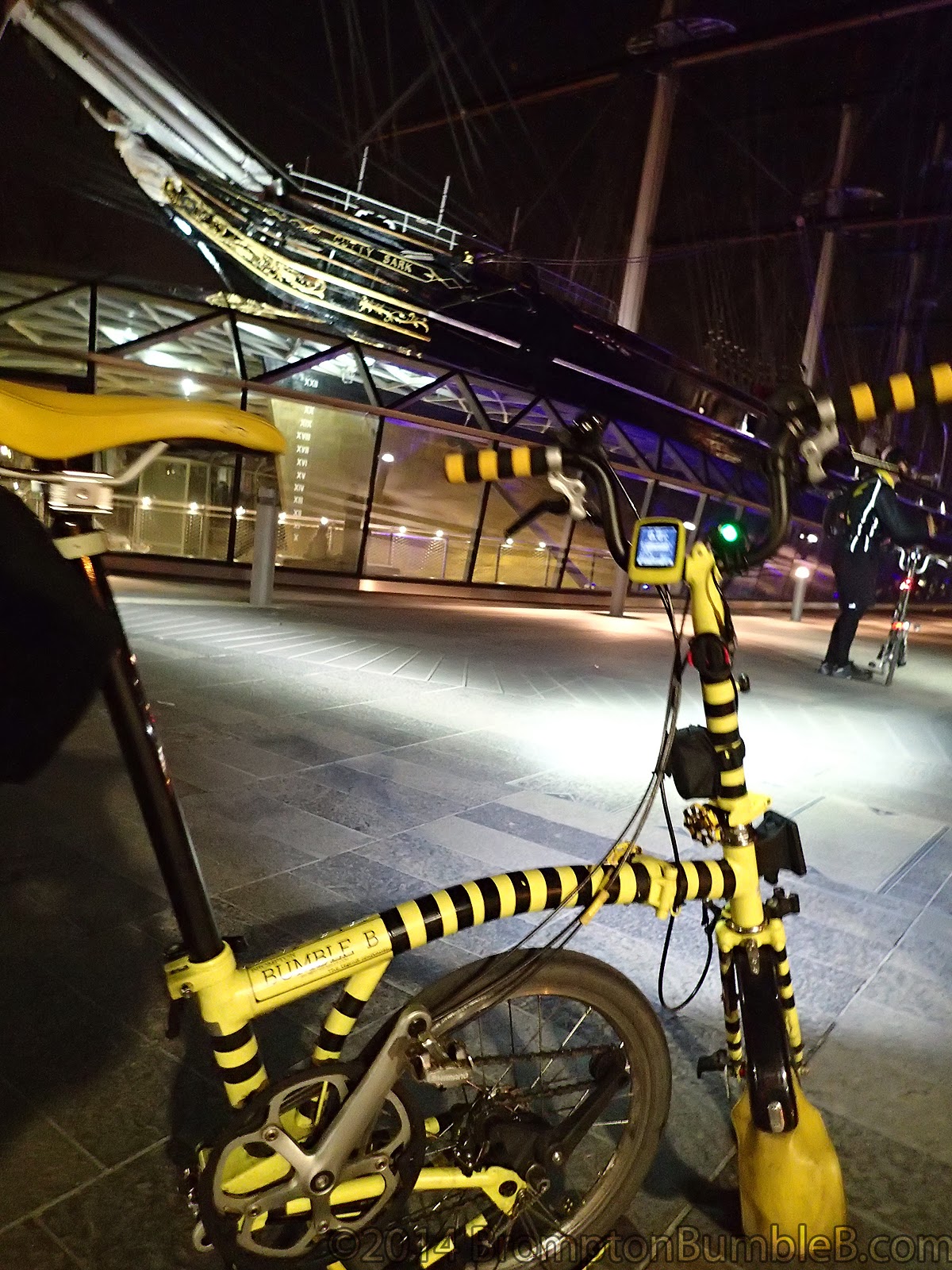 Our final destination coming into view. 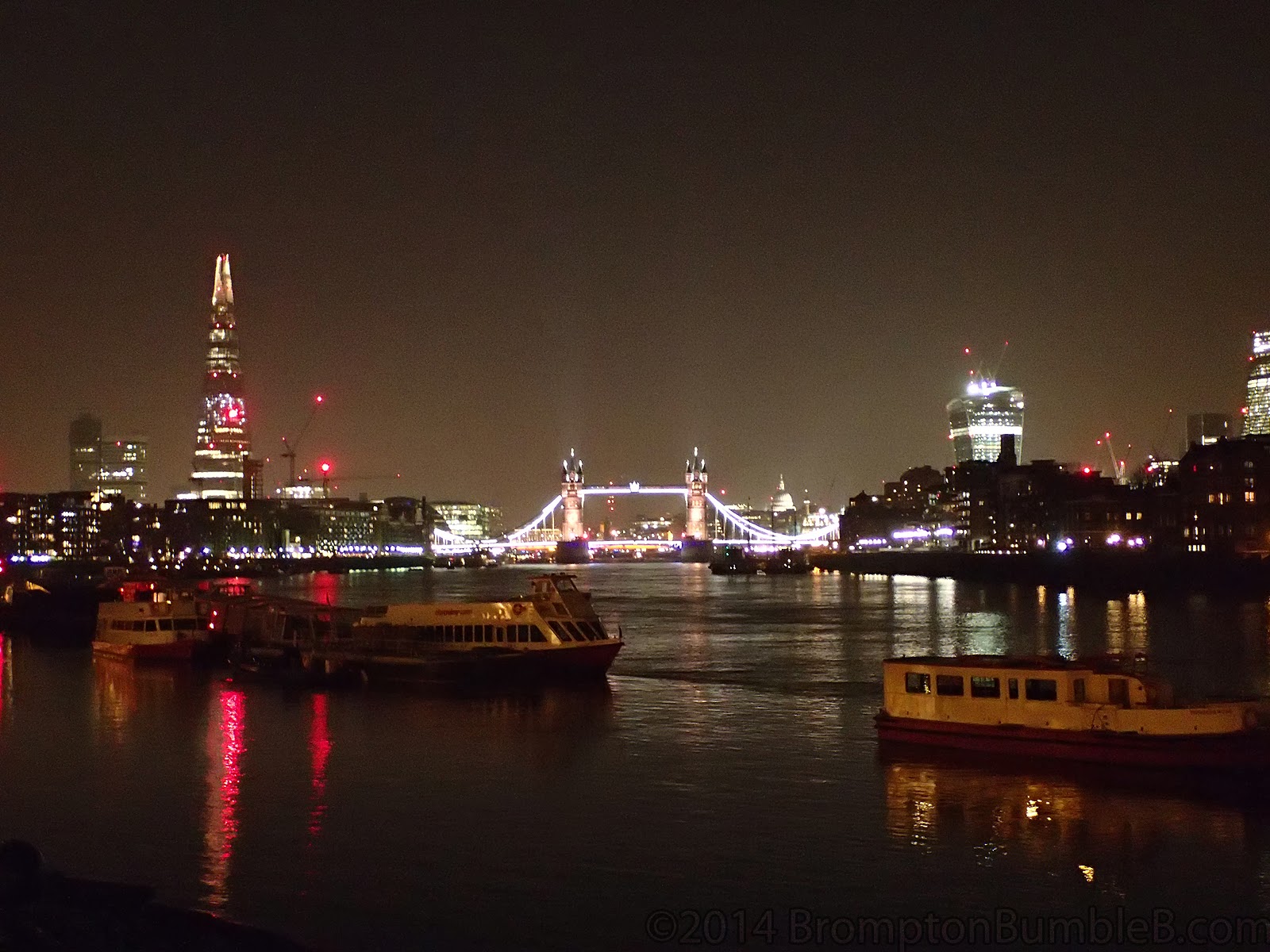 As we passed London Bridge David P & Ann M parted as they had there car parked close by, Me and my cycling partner in crime started to head towards Green Park where I would be catching the tube homeward.

Once again I cant thank everyone enough who turned up and rode with. Hopefully I will get to ride with David H the next time he is in town with his B.

As always here is a link to my Garmin Data of the ride: LBC Ride: Docklands by night & Chips
Posted by Brompton Bumble B at 23:00