Having been watching the weather reports of late in the UK you would think that having a long distance ride would be crazy.

Well us Brompton riders are, so we ride.
This would be our first big ride since Christmas & I was looking forward to it to get some serious miles under our belts.


Made sure I was full fueled up with porridge & bananas. Even took a few with me for the ride. The meeting point is the very iconic London Eye along the River Thames next to Westminster Bridge. I was surprised to find I was the first to arrive so me & BBB spent sometime enjoying the sun for the first time this year. 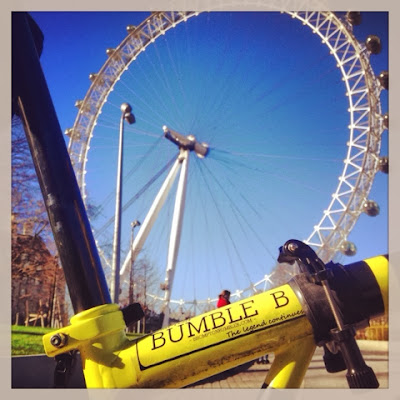 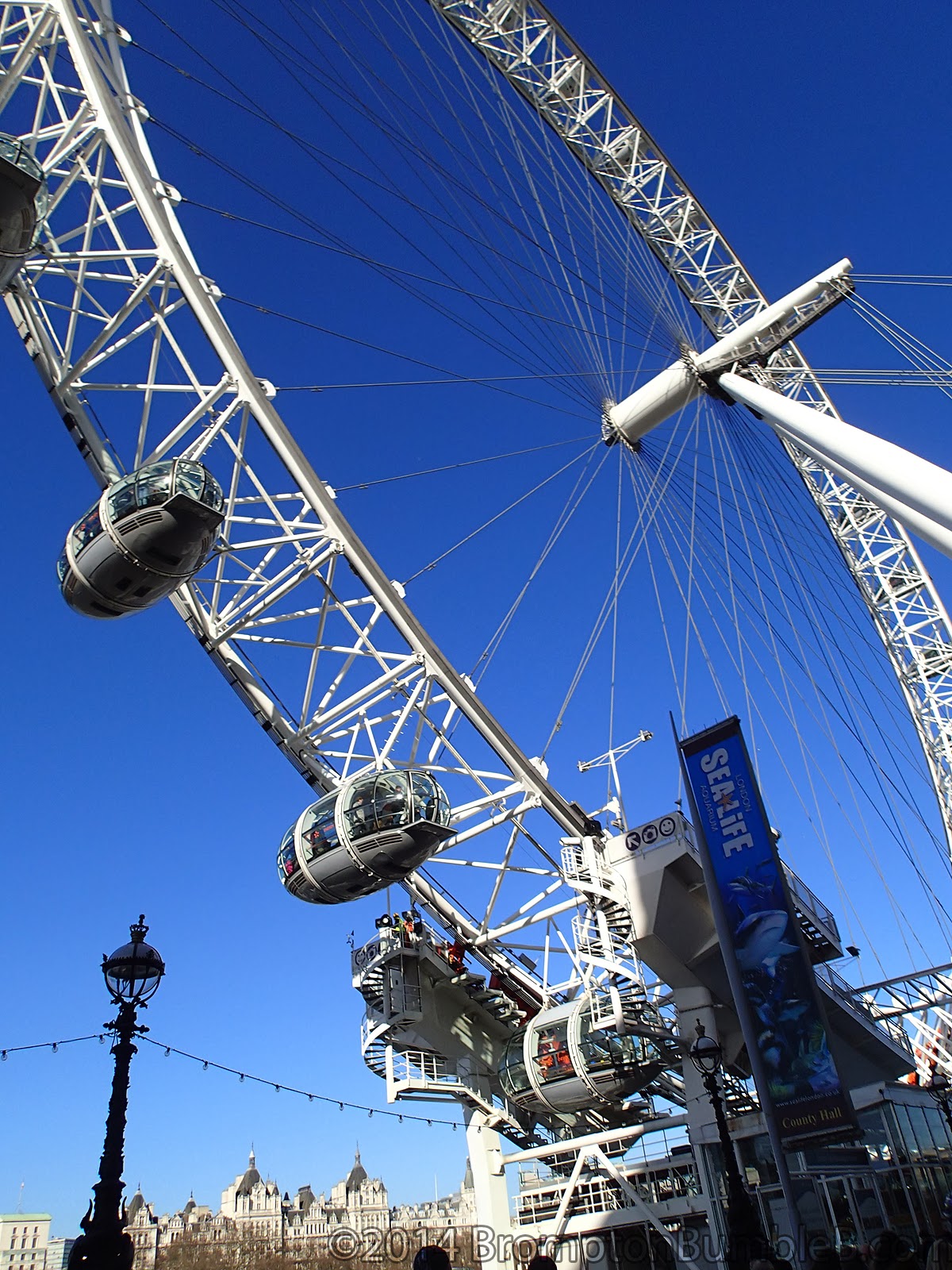 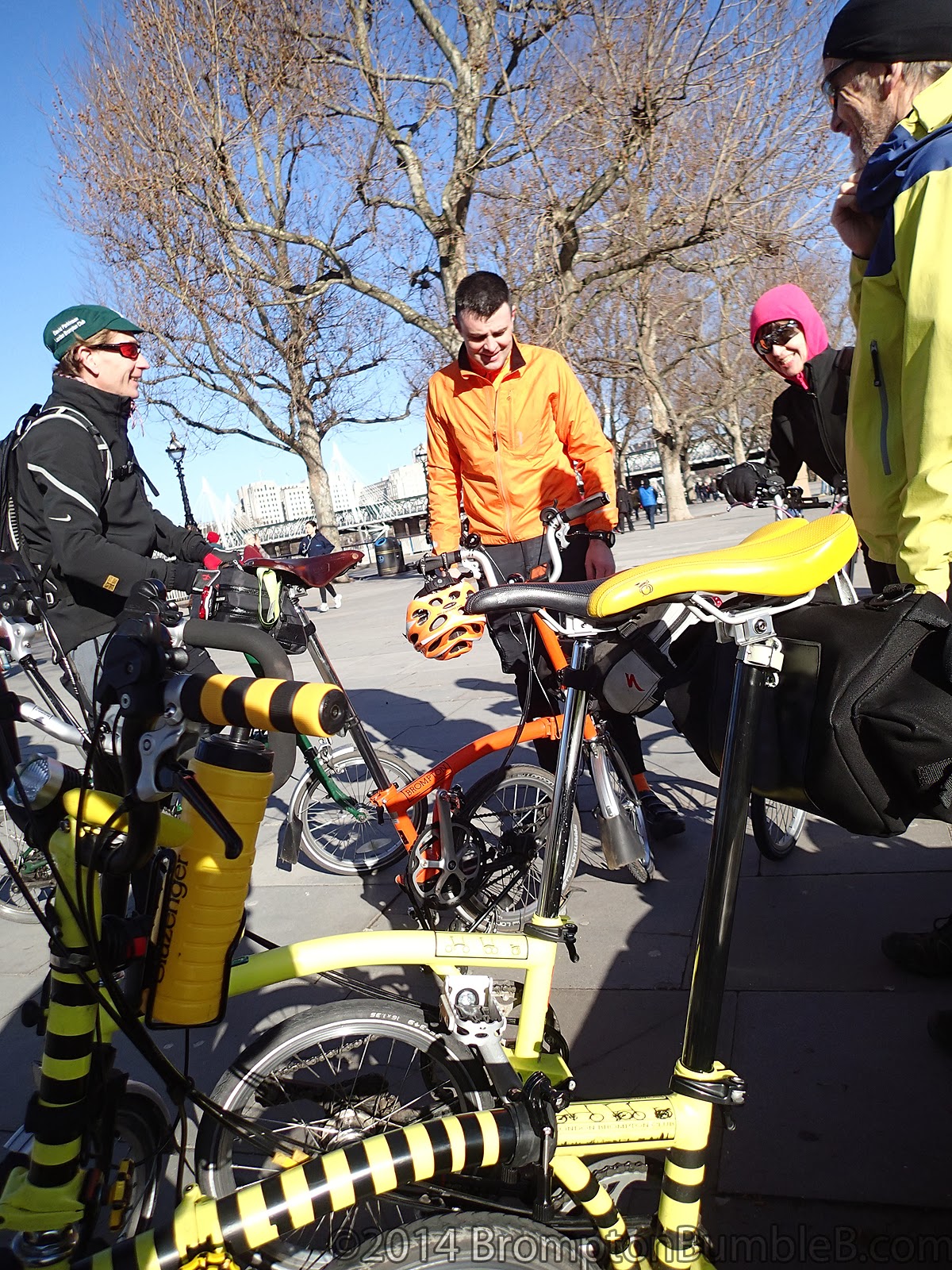 After awhile my fellow club members arrived & after a brief talk about the route by our navigational Jedi Master David P we all headed along the river zipping between the tourist who were also enjoying the sunny bit slightly chilling day in the big smoke.


Passing this odd looking building which I have never seen before, after a little research I found this information about it. Looks like a Alien space ship kind of thing to me or a Dutch pot.


Albion Riverside, in London, is a high-end residential development located between Albert Bridge and Battersea Bridge on the River Thames. Completed in 2003 for client Hutchison Whampoa Property, it was designed by Foster and Partners in a high-tech modernist style to include an unusual asymmetrical crescent plan for the primary building with two independent rectilinear blocks to the west. The architect’s own office, built in 1990, is immediately alongside to the east.

Most of the way was along paved pathways near the River but then as we started to head south the paths were starting to get abit rougher. 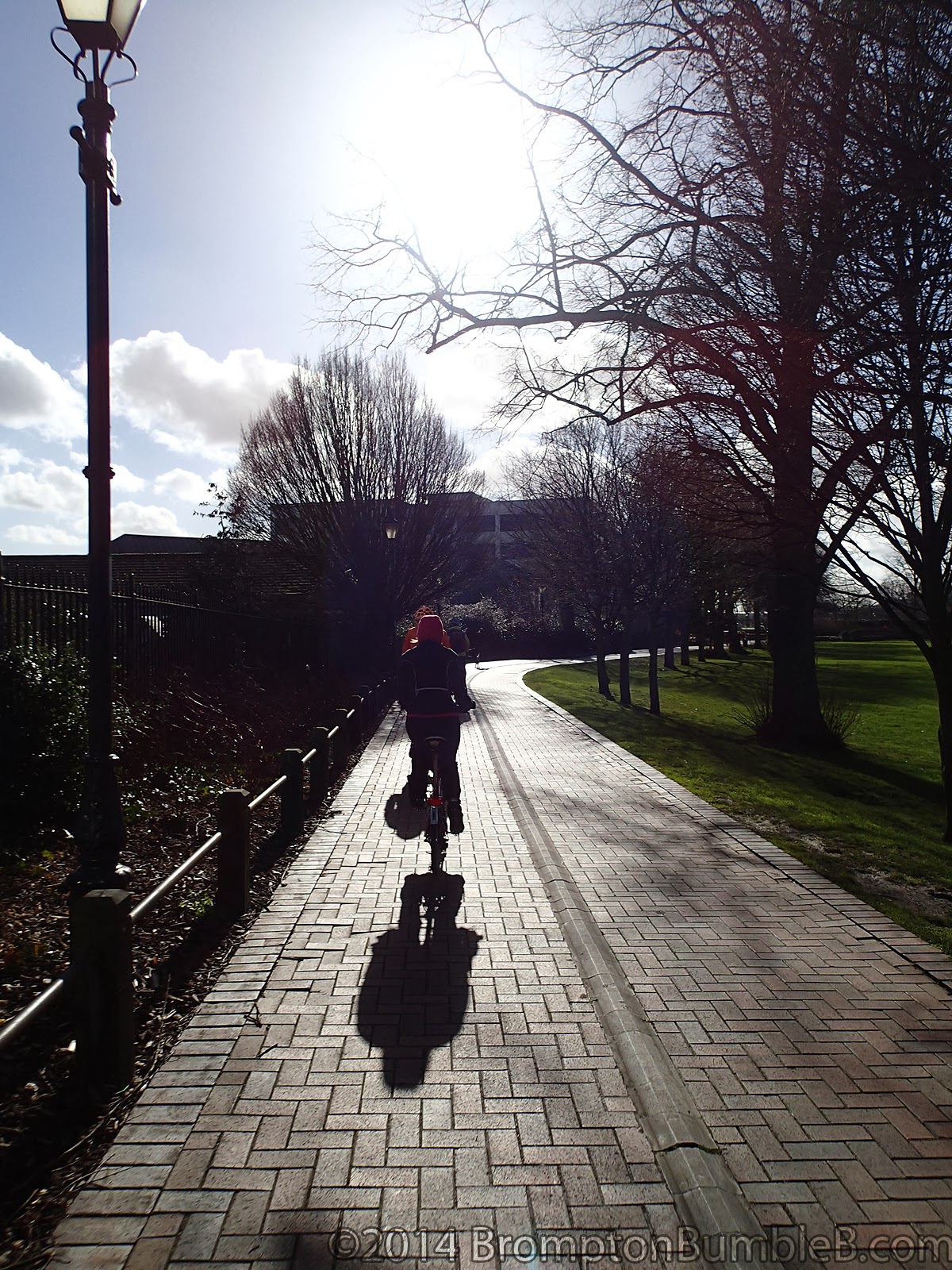 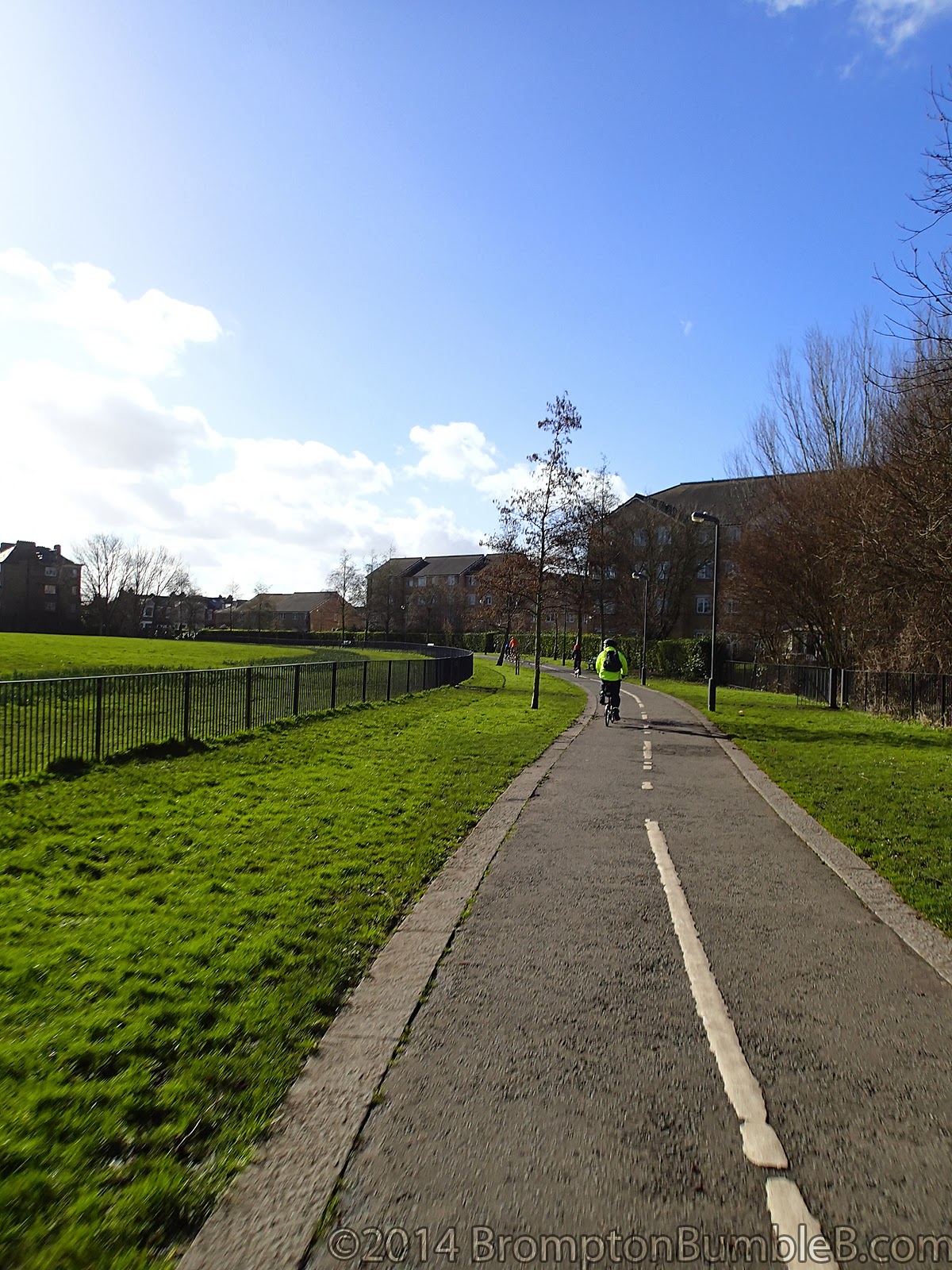 We started to come across a few victims of the recent stormy weather & encountered our first fallen tree across out path. By the end of the ride there would be atleast 3 fallen trees. 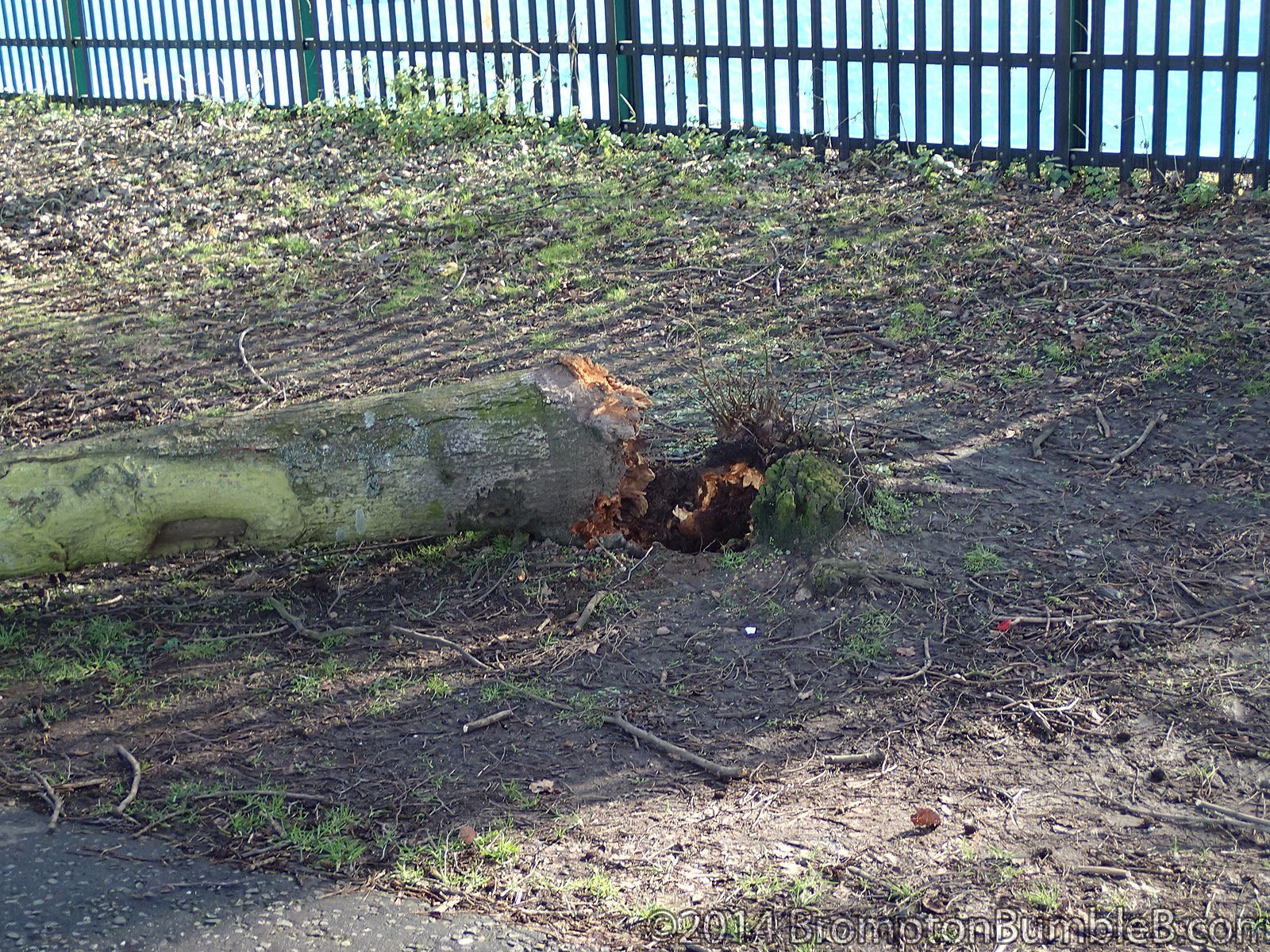 We then came up to our first little rest stop for toilet break and refreshments at Katavento Brazilian Restaurant. They had a awesome Pineapple & Mint Natural Juice which I simply LOVED. Have to go there again in summer. 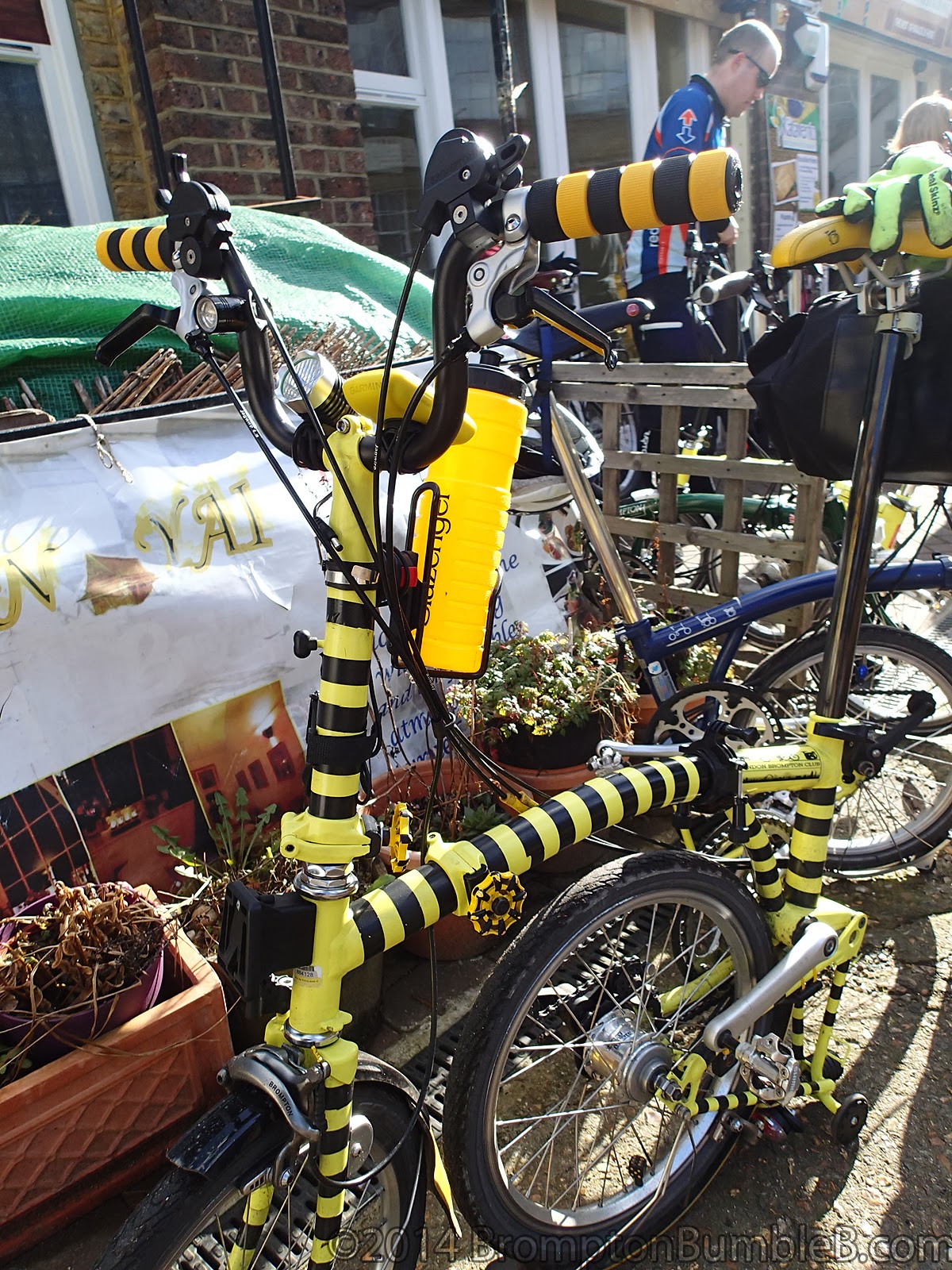 As you can see the recent weather we have been having in the UK has been pretty bad and all the canals are almost at bursting point. This would come into play even more on this ride.

After this we started to get into more open roads where I started to get left behind a little. I don't mind so much as it gives me a chance to focus on my breathing and cadence to get up the hills we came across and ofcourse the others waited for me with big smiles on their faces and every once in a while giving me words of encouragement as we go. 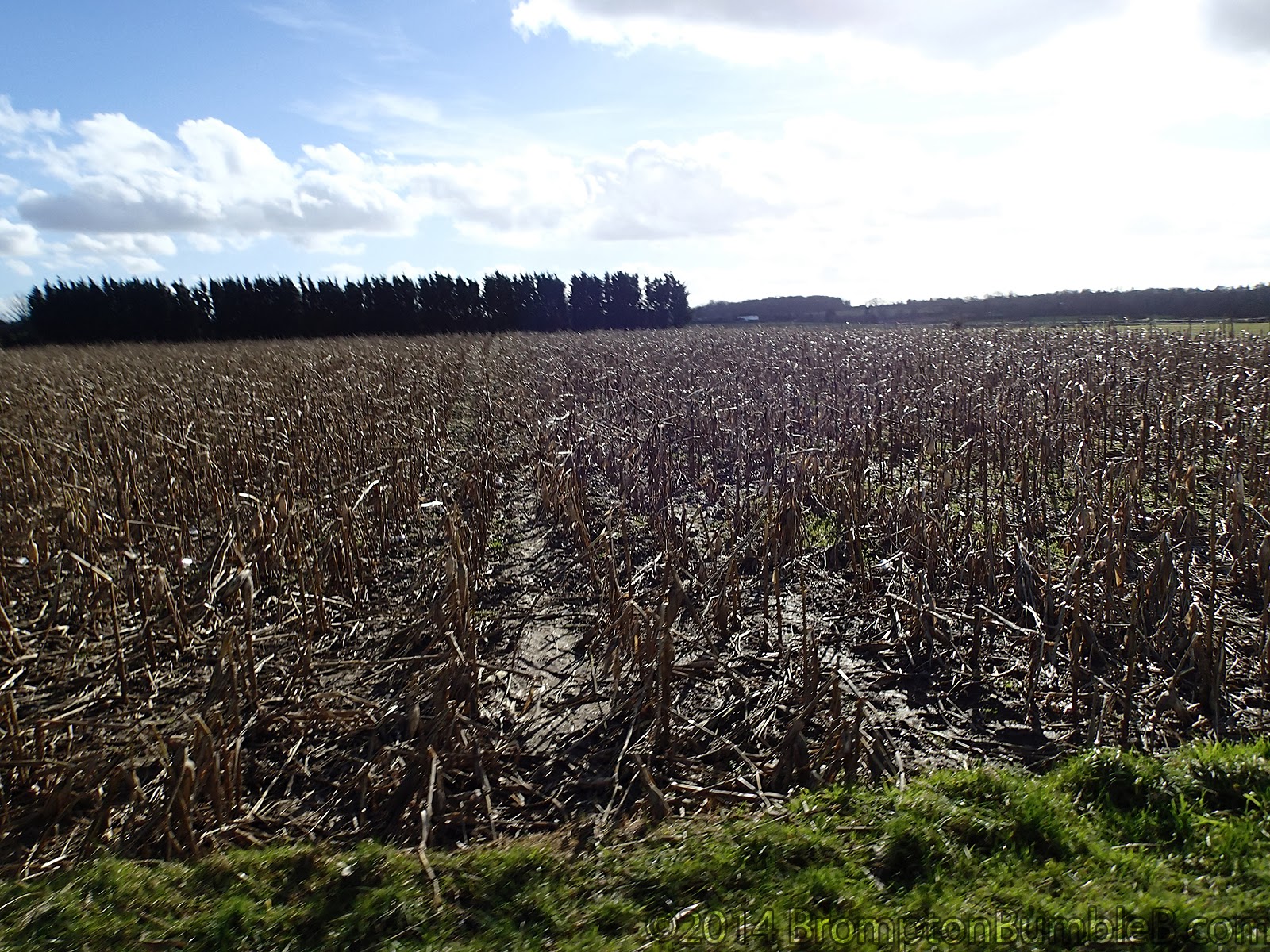 Our half way point was at the Oak Park Tea rooms which I have to say was very busy with lots of dogs of all kinds, big and small.

At this point many of us had a good hearty meal I on the other hand for some reason just wasn't feeling too hungry and only had Cheese on Toast & Hot Choclate. Although very nice it wasn't enough of a good meal on a cycle ride which I would pay for DEARLY that evening. 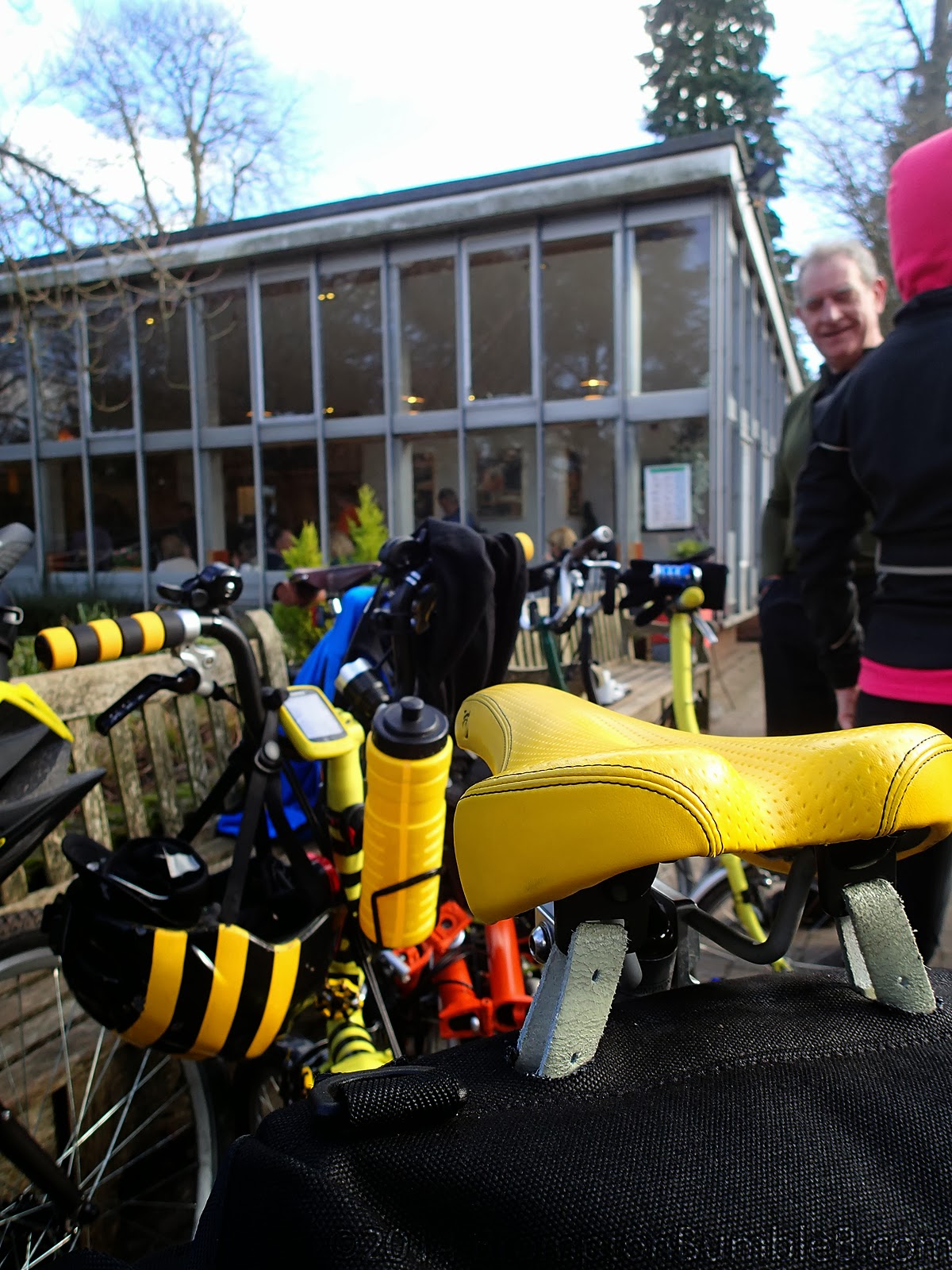 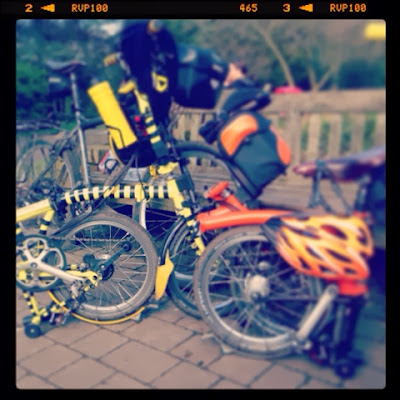 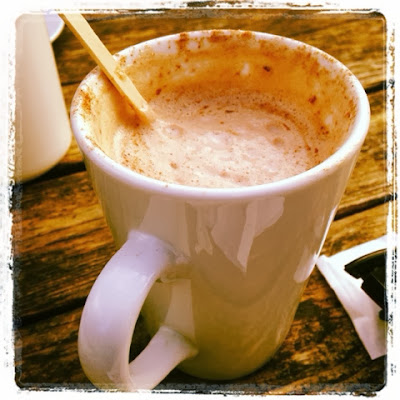 After lunch it was announced that we would be starting to hit the big hills.

Farthing Hill was first up & was pretty exposed. Everyone else zoomed off into the distance while I pedalled on best I could keeping my cadence around 90 rpm. Did stop a couple of times as my breathing wasn't right but my stops are coming shorter these days I've noticed so I know I'm slowly but surely improving on my hill climbs. 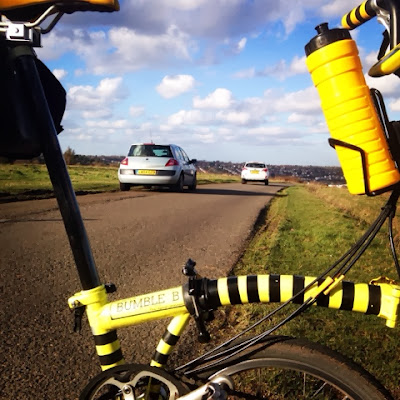 When I did finally get to the top of Farthing Hill my cycling buddy, Mr. O was fixing a rear wheel puncture he had got just as he got. 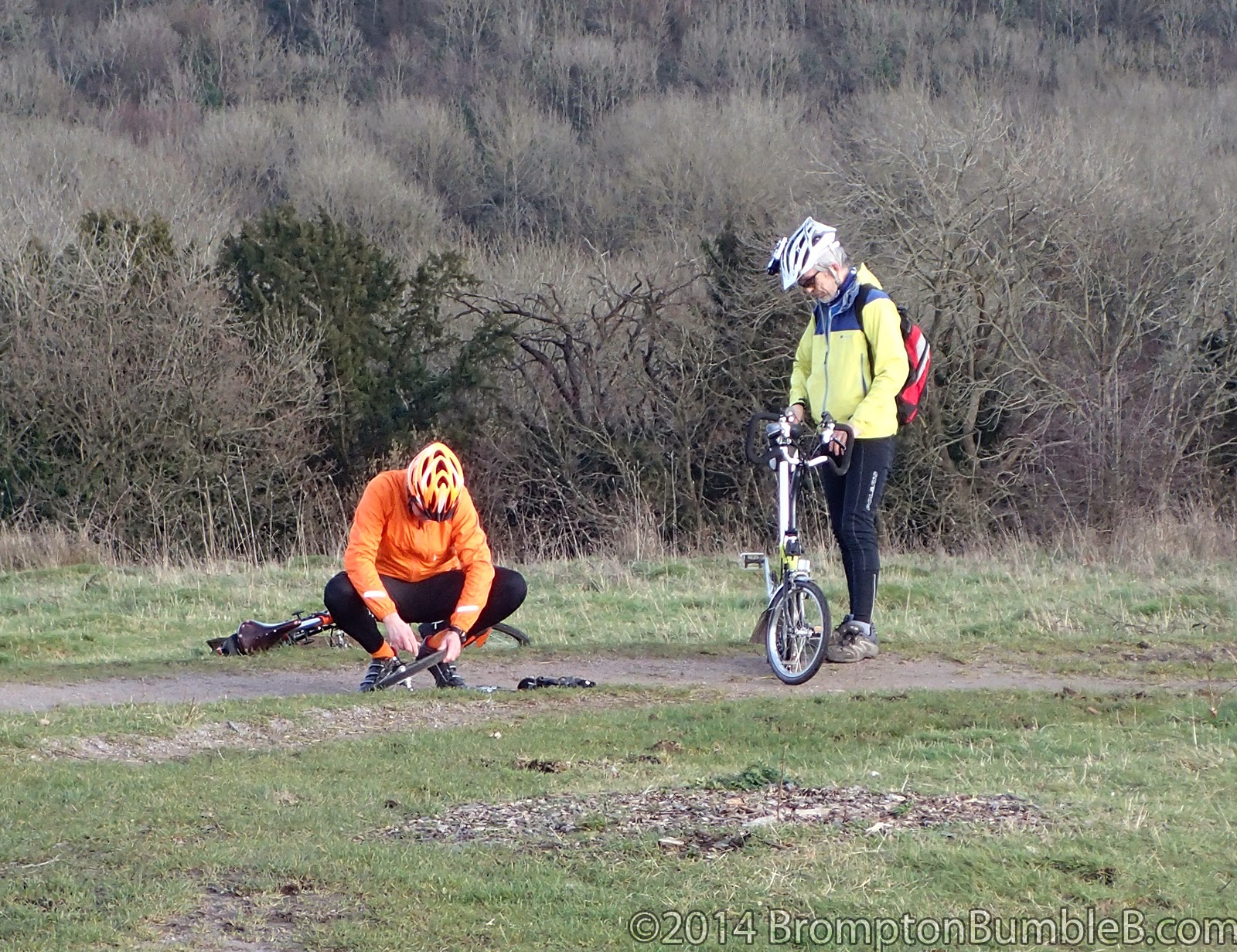 After this point it really started to get nasty. We was getting into proper countryside type places at the cycle paths we started to go on didn't look like they got used a a whole lot. Some where littered with toilets, building materials & other rubbish that has been dumped illegally I  would think.

It was pretty hard work as along with the rubbish you had to watch out for the muddy parts as well as making sure you didn't go over anything that could cause you to get a puncture. By the end of the day there was about 3 punctures.

At this stage we just powered on to the final push towards Gatwick Airport. We had to double back atleast once due to flooded canal and more fallen trees but it wasn't as bad as we was expecting.

Finally we got to Gatwick Airport's South Terminal.
It was a good ride, a hard ride for me as it was the first big ride of 2014 and cause of the weather I knew I was well out of shape.

Now you would have thought that was the end of the story but no there was more.

After I came home I had a hot shower as normal and gave my legs a good hot rub down like i have in the past to make sure I didn't get cramps.

A few hours after i came home and was relaxing I started to feel a intense pain in my left thigh muscle. I knew it was cramps so I quickly jumped up trying to straighten out my leg out. In the end I jumped in the shower again and directed the cold & hot water on my thigh but kept it moving til the cramps died down and my leg settled. It was more painful than I had before and I almost started crying it was that bad.

I thought ok thats it its passed it wont do that again. How wrong was I?

15 minutes later the right thigh started doing the same and I had to jump into the shower again with hot and cold water on that thigh to settle it down after about 10 solid minutes.

After this I started to do a little research after some members of the LBC commented when I told them of my cramp and alot saying that I was low on salts and probably dehydrated as well. I have been told that electrolyte tablets will help in my water bottle.

I didn't drink enough water & didn't have enough at lunch time so ended up with bad cramps. Atleast my brother heard me doing the "cramp dance" but didn't get to see it cause I ran into the bathroom so fast to get the water on the muscles.

Its all good as I'm learning much more and will help me become even better and become even more legendary....

Til the next ride,

Bee Safe all
Posted by Brompton Bumble B at 13:57