Last night we headed to Box Hill again with the hardcore of the LBC. Managed to get to the meeting point of Kew Gardens ready to head to (Cardboard) Box Hill & back.

Met up with my fellow LBC rides, the true hardcore of David P, Anne M & ofcourse Mr.O. The weather had cleared up from its attempt at drizzle earlier in the evening. No wind but on the chilly side.

We began heading off into the darkness at a pretty high pace. I need to go at a higher pace to increase my fitness level for all the huge rides I have in store for me in 2014. I also noticed that when we stopped at some traffic lights I realised fully that we was all sporting SPD pedals. Anne had recently converted to them and this would be her first big ride in them.

But something was off.

I couldn't really put my finger on it but I didn't feel right.

I had a lot of thoughts of heading back to the car & writing this ride off before I got too far. We started to get out of busy London. We stopped for a little break. I checked BBB and in the dim street lights I could see my hub gear chain looking too loose. Sure enough BBB was running on 4 gears & not his normal 6. David P & Mr. O helped me sort out this simple problem & we was back at full strength.

I guess when I took BBB's rear wheel for cleaning & servicing I didn't tighten the tiny locking bolt properly on the gear chain to the hub. This has happened before when I have taken off the rear wheel and cleaned it thoroughly.

Good thing I noticed as not soon after we started again we started to hit a few inclines.

I started to feel slightly better with encouragement from the others. Commenting on my brave entry into the 2 day MITIE London Revolution Sportive 2014 I kinda had a little sinking feeling.

"185 miles and I was currently haven trouble with just over 50 miles right now?"

Pushed those thoughts aside and tried to focus on my cadence and breathing.

Soon we was entering into what is called "The BADLANDS"

This is a little cut thought we use to on the way to Epsom. It's infact a bridle path & with the recent weather we have been having over the last week it was, can we say a little muddy. Ok this is an UNDERSTATEMENT of BIBLICAL proportions. Not just the mud but also the main users of this bridle path left us some natural "LANDMINES".

Soon we was passing though Epsom town centre. We spotted  some Christmas lights & a tree in the town square so we decided to have a little stop off for photographs. 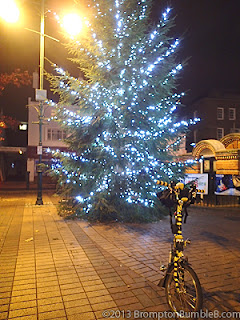 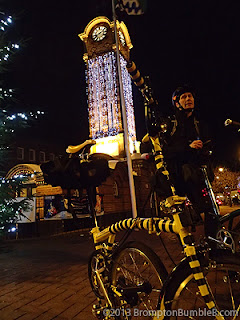 While we was there we where approached by some merry young party goers. Once again seeing my cycling partner recoil is always fun but these guys where fun and actually wanted to have some photos taken with us & ofcourse the bikes. After saying our goodbyes and hoping our new friends a good time we headed back into the darkness on the way to Box Hill.
This time though I didn't speed past the entrance to the bottom of Box Hill. As the others went off at their own pace which is always faster than mine when going up hill, I put my head down and once again focused on my cadence and breathing.


Box Hill wasn't as busy as last time, I suspect the cold had kept most of the people closer to home so we basically had the whole of Box Hill to ourselves. With my CREE headlight shinning the way ahead of me & BBB we continues onwards. I did stop a couple of times, I see to find it a little hard to keep my breathing right. After a few deep breaths I was good to go again, I only did this twice on the ascent to the sumit of Box Hill.

We finally made it to 'Smith & Western' - a western themed pub/restaurant at the top and for our weel earned meal. Once again this place is lively full of western items dotted about with lots of families enjoying themselves.

Our waitresses remembered our little gang from the last time we was there took our orders for food. This is the point where I revealed the new "Bumble Bee" cycling jersey. Ann M commented on how good it looked and I have to say it felt damn good riding with it on even though it was under another cycling jacket cause it was a little nippy out.

I had to try out one of the bigger desserts on the menu, below was NOT the biggest by along shot but I I felt I couldn't handle the huge one that I have see not tonight. I still had to get back to Kew Gardens yet. 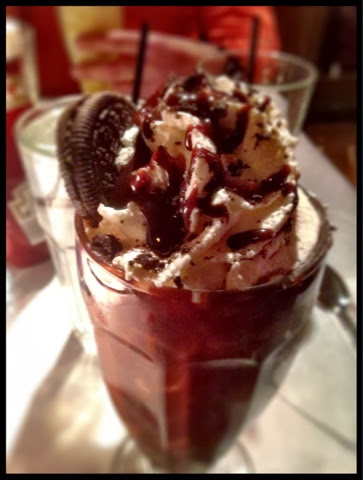 After this HUGE dessert we headed off back to Kew Gardens. Thankfully it was most down hill from now on. The temperature had dropped slightly again so we headed back with purpose and made pretty good time back to the parked cars.

It was an enjoyable ride as always with my LBC gang and with so few of us it was a much faster pace which I did find a little difficult to keep up with. I got a lot of training to do not just physically but also mentally.

I shall be working on this as 2014 is going to me even bigger.