Not a huge ride by my now high standards but a damn good one all the same cause I was with my LBC gang.

Just as I was existing Waterloo Bridge on my way to The London Eye I was stopped by what appeared to be a photographer. This isn't anything new to me and BumbleB as I am always being asked about my Brompton Bumble B. The photographer was asking if I was attending the Critical Mass ride which was starting near the South Bank & asked if he could take our photograph. Being the legends that we are ofcourse me and BBB agreed & he proceeded to take a couple of snaps. I managed to hand him one of my cards before we went out separate ways.

Got to the meeting point underneath the iconic London Eye.

Greeted by big smiles but some faces I haven't seen in a good long while as well as regulars & even some new ones. That's the thing about the LBC rides there are always new faces as we have international members who pop over.


Once everyone was garthered together we headed off with David P guiding the way. As always a sight of so many Bromptons heading off together is always a great sight and we always attract attention from the public as we roll by. 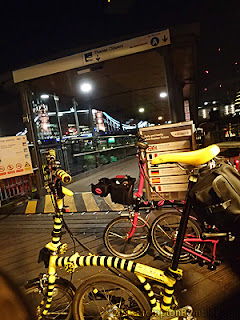 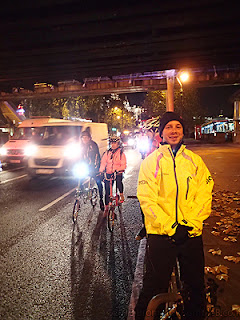 Even though it was a little cold and breeze on near the river we just kept on going.

Passing so many London icons you can never get bored of seeing London at all times of day or night. I especially enjoy London at night as with the lighting it really comes alive for me. Now that Christmas is just around the corner.

I have to say out of all the bridges we went across I liked Albert Bridge the best with is lighting. Almost like a Walt Disney like lighting.
At the half way point we stopped off for a break and some hot food and drink. 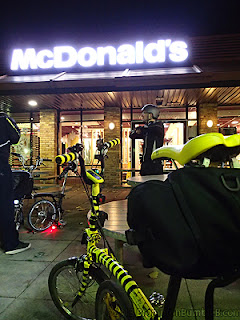 With the temperature dropping a little more we pushed on to do the rest of the bridges. The traffic had died down alot by this time and we was basically going out of London more so alot less traffic to play with.

We powered on & finally got to Richmond Station and quiet a few of us decided instead of riding back to London the quick way we jump on trains etc to get back.

While sitting on the overground train my cycling partner in crime spotted that my rear tire looked a little odd. Turned out that abit of the tire was pulling away from the wall as you can see in the photo below. I got an old front tire I can replace it with so not a biggie.

Seems I'm really am cycling a hell of alot and not breaking things but wearing things out. I have to say I'm kinda proud of that fact and will continue to look after BBB as he is looking after me. 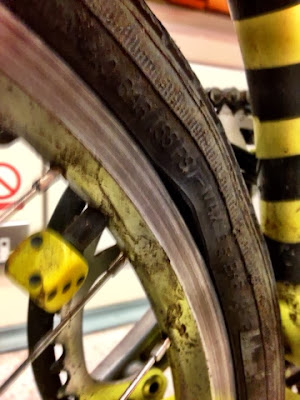