LBC: Reading to Richmond in the rain

While getting to my local station a guy asked me if my saddle bag got in the way of the fold. I was just at the barrier so I just showed him the Carradice Barley saddle bag & folded showing him it didn't get in the way. If anything cause it so big, makes it heavy with supplies :D

I always like travelling on the tube as I always catch people looking in our direction as BumbleB sits beside me. I know they are all wondering "Thats the legend, I wonder where they are off to today!"

Met up with the gang was a little late as David & Anne P, Mr O, Jenny & others already boarded the train. Lucky I was looking for them as the first train on the platform was out of service & had to fast walk it down the platform. Said my hellos and hugs, the rest of our little gang boarded and we was off. 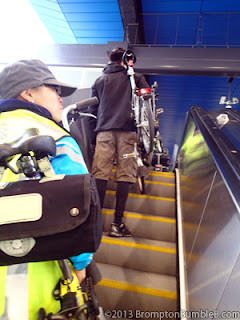 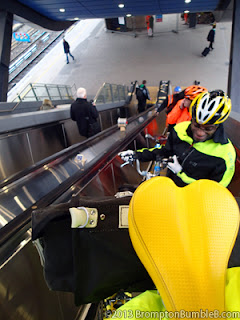 Our leader for this ride was Bob H who we have ridden with a few times in the past mostly the big long rides.
Just before we was about to set off the heavens opened and it started to rain, this would set the scene for most of the ride but we all had known it would rain so a few extra minutes spent putting on waterproofs. This would be the first time I would wear my full on waterproofs in my Altura Night Vision Jacket, Altura Night Vision over-trousers & my latest addition the Crane overshoes.

There is something about seeing a gang Bromptons & their steeds gathering in one place. You could feel everyone walking past looking and wondering

We was going at a decent pace, not to fast not to slow, well with the rain you couldn't really go that fast anyway. 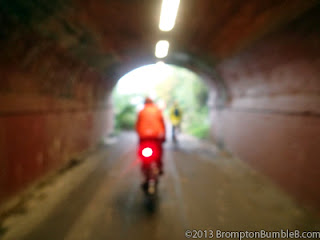 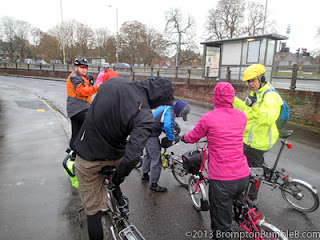 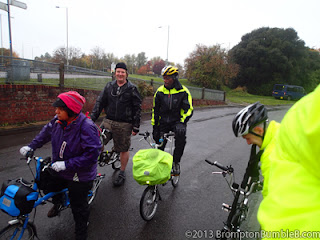 Word got to us that someone had a puncture and where sheltering under the railway bridge we just past.

We returned to the railway bridge to shelter from the rain, while waiting for the puncture be repaired. 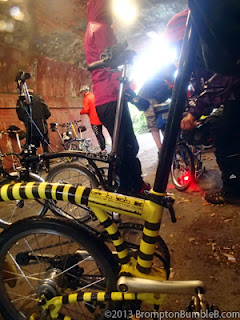 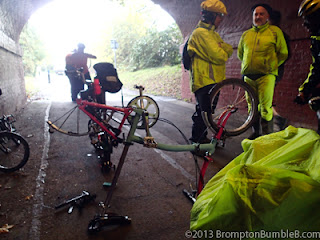 All fit and ready to go we headed off again. The rain was pretty constant the whole time, no heavy but fine.

Few more miles down the road we heard of ANOTHER puncture. Yup another one. The lead group took shelter where we could. 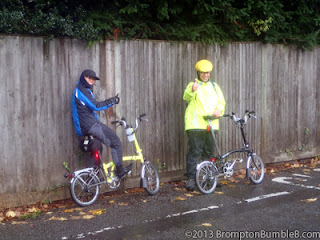 With the latest puncture all repaired we continued onwards into the rain. 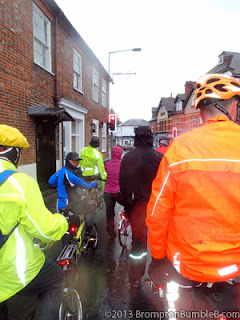 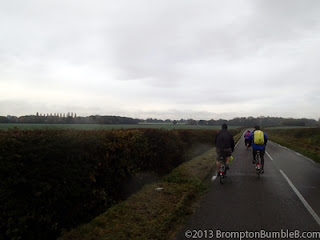 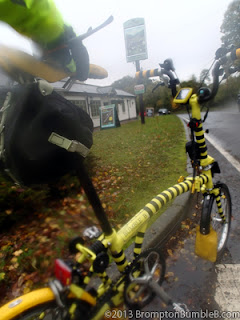 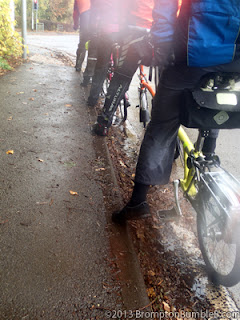 As we stopped off near Ascot Race Course at a Costa Coffee that was giving out free Christmas cake examples. We pretty much finished off the huge tray the girl had. Some tastey cakes to, will have to make sure I "sample" more in future.

Not long after this part of the group took a different direction but lucky that those in the other group knew where we was heading to and we joined up again before we headed though Windsor Great Park. 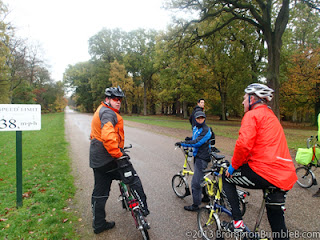 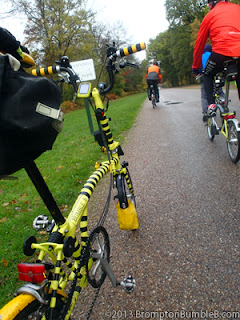 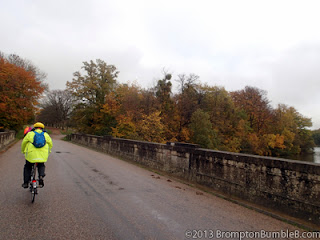 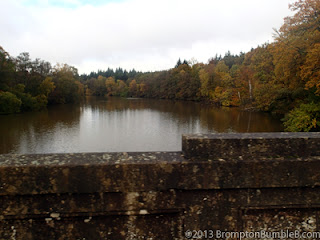 Heading out of Windsor Great Park we made a little detour. This would be the first time I've had a big ride before heading to the world famous "Monkey's Forehead"

Last time I was here I tackled the MEGA Breakfast which actually beat me. 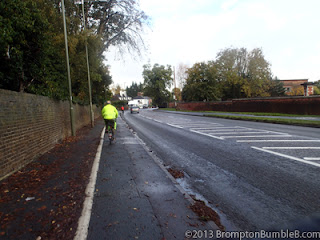 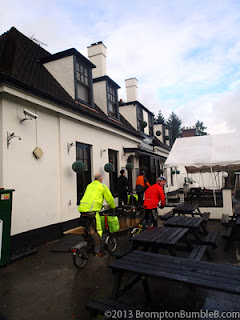 I learnt from that HARSH lesson I decided I wouldn't tackle the MEGA Breakfast.
This was our main stopping point we still had about 20 odd miles to go but we where basically on the home stretch.
I was hungry but didn't know what to order, in the end I got a 3 Sausages, mash in a bowl made of Yorkshire Pudding & ofcourse a Hot Chocolate. 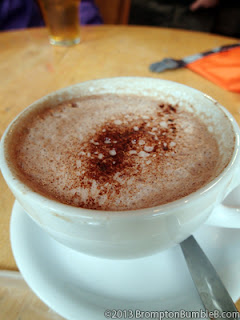 I wasn't going to have a dessert but I handled the sausages so well I thought I'd tackle a Treacle Pudding.


OMG it was sooooooo yummy. I had to resist ordering another one as we still had a good distance to go.

Just as we was thinking of heading to Richmond Station our finish point there was ANOTHER puncture to be repaired. I didn't mind as I was still drying my wet gloves on the very hot radiator I had found in the pub.

At this point I took off my overshoes as I thought the rain had finished. 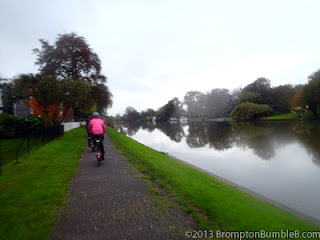 We was heading down along the pathways heading to the Thames river. Even though it had stopped raining there where ALOT of puddles & muddy paths. The first puddle I hit my feet got wet for the first time.

We was going to go though this field as a short cut but the gate was locked and plus it looked pretty muddy in any case. 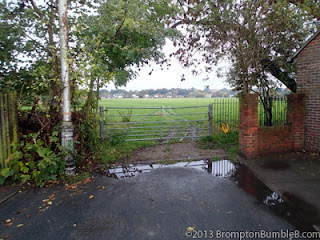 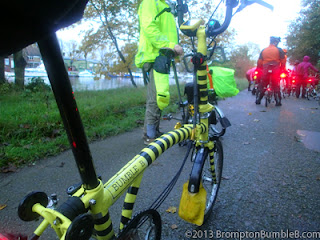 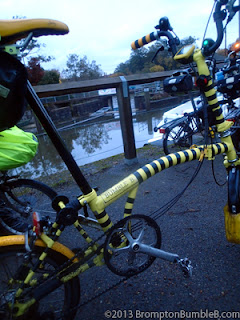 I recognized this lock along the Thames and knew we wasn't to fair from Richmond Station. Some decided to go to a pub for a well earned rest and drink but me and BumbleB where just a little dirty and wet.

Another good ride with my Brompton buddies, some new faces & regulars. Big thanks for Bob for leading this ride. As always even though it was raining its the company that makes these rides awesome.

Having got home I got to work on BumbleB, he was pretty dirty to say the least. I was going to take a picture but I sensed that BumbleB didn't want a photo in his condition. Took him out into the back yard and hosed him down pretty good, also washed my muddy overshoes, over trousers & cycling shoes.

Can't wait for the next ride which is (Cardboard) Box Hill Revenge Ride in a couple of weeks. I'm looking forward to this to see if my first conquering of (Cardboard) Box Hill was a fluke or not.
Garmin Data: LBC Ride: Reading to Richmond (Rain)
Posted by Brompton Bumble B at 08:34