I planned to go to Aldi to get a few bits and bobs before the ride.

As my cycling partner in crime posted to the LBC facebook group I'm becoming LEGENDARY in being late for rides. The start point for this ride is just a little further than my normal commute into work so I shouldn't have been late at all.

Anyways just about got there in time but as always with a big ride like this people where always arriving and never actually left dead on time.
We left and heading towards the Olympic Site, well as far as we could with all the re construction going on.
Alot of the pathways where boarded up with construction going on behind them. At least we amused some of the construction workers with the amount of cyclist coming though all at once.
Heading towards East London, Stratford along a cycle path I never knew existed. Purpose built from what I can tell. 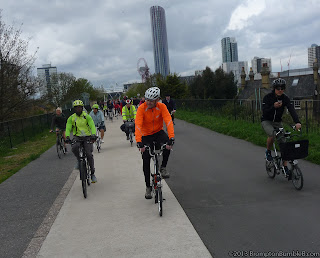 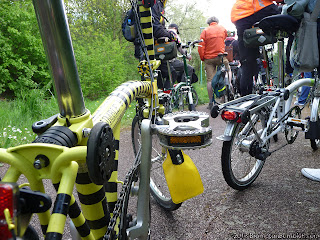 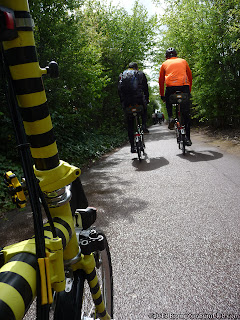 These cycle paths don't look like much but they are a nice little quiet cut though to miss out on all the traffic to the Royal Docks. Some parts I have done with the London Brompton Club with the Thames Triple Chaser Rides in the past, but we was coming in from a different route but still interesting none the less. 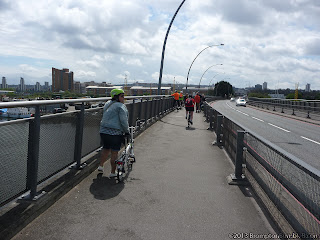 We even past the end of the runway for the London City Airport. But planes are only allowed to fly at certain times so we wouldn't be seeing any going right over our heads. Maybe another time.
After the airport we headed off to Woolwich and to the Woolwich Ferry. It's always fun when loads of cyclist raid the ferry. :) 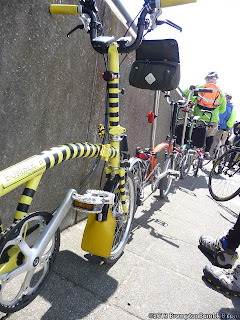 After the Ferry we headed down to The Thames Barrier where everyone started taking photos as always.
Someone asked me if I wanted a shot of me and Bumble B together so why not eh?

Had to give him a little hug too while I was at it
There was a photo opportunity to have a big group shot for the iBikeLDN facebook page. With the photographer not having a wide angle lens he had to get a little inventive.


We headed off down towards the Cutty Sark. Most of the LBC crew have seen what's further on and suggested we cut our ride short. For a few of us the pace of the ride was pretty slow and a lot of stops. I guess we all kinda used to a much quicker pace. I always like travelling on the Thames Clipper back to Embankment.
I liked the way we parked up our Bromptons all together like in the Brompton advertisement
Even with the little rain shower we had on the first part of the ride it cleared up nicely and brightened up. Good ride with all kinds of riders & bikes. Hope I get to see more of them in the future as summer is just about starting here now.

Word is that another iBikeLDN ride is planned for 2nd June, can't wait to find out more about my own city :)
Posted by Brompton Bumble B at 19:58