After having the Garmin Edge 200 Cycle computer for about a month and even taking it on holiday with me to the USA (without Bumble B) I found that I wanted more. The only next step would be to get the Garmin Edge 800 cycle computer as it's Garmin's current top of the line cycle computer. I liked the idea of turn by turn navigation even though it can replace the good ole paper map & asking the locals to where things are. I guess I like to see the moving map of where things are as sometimes when driving I put the satnav on just to see the names of roads etc past by.

Today was going to be a training ride with my partner in crime Mr.O but the night before it was raining pretty hard and we thought today would be the same. How wrong was we eh? Well I had a few things to do and with the weather turning out nice I thought I'd give the Garmin Edge 800 abit of a work out as well as myself.

Review:
I thought I would keep my old Velco cycle computer on Bumble B with the Garmin Edge 800 as I did with the review for the Garmin Edge 200 to see if there was any more difference between them.

As you can see the Edge 800 is much larger than its little brother but then again it does a hell of alot more.

I haven't really had enough time to really play with the Edge 800 as this is the first time I've been able to ride with it. I found that I could use the same mounting clip as the Edge 200 so I didn't have to change anything on Bumble B. I've only just scratched the surface of what the Edge 800 can do and its going to be fun doing it. I know a few of the members of the London Brompton Club have one so maybe in future we will be swapping hints and tips on how to get the best out of our little gadgets.

I just luv cycling around and watching the map move about as I ride, even with the tom tom in the car I do the same thing :D

Ended up going along Hackney Canals so took a few pics 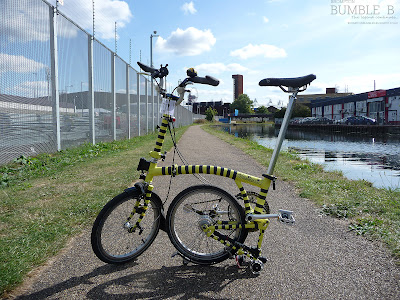