Fun in the sun in London #RideLondon

Yesterday was the awesome Prudential RideLondon

What a great weekend for cycling in London. Been looking forward to this weekend as I know I would be meeting alot of my cycling buddies that I haven't seen for a long time.

The weather was perfect, not to hot and not alot of wind.

Got up early as I had to do some final upgrades to the legend before we headed out. I hate doing things like this at the last minute as I kinda getting frustrated when I can't find tools but finally got my boy sorted and we headed out.

On the way though I always listen to my boy as I ride and could tell something was a little off after about 2 miles I almost lost the little flap on the read mudguard as I didn't tighten the bolt tight enough but lucky I was listening and heard it fal off. I only lost the tiny nut & still had the flap and bolt the flap so saved them to put back on later. I will do a bigger blog post on the latest series of upgrades later on so stay tuned for that, but here is a little teaser ;) 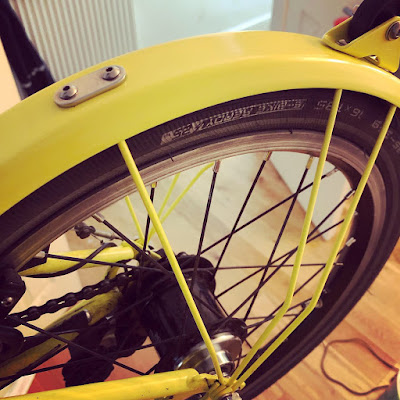 Finally join in the RideLondon area in central London. It was already starting to get pretty busy so I was having to watch where I was going.


Everyone can enjoy a bicycle ride on traffic-free central London during Prudential RideLondon FreeCycle. It's a great way to see many of the city's famous landmarks, like Buckingham Palace, St. Paul’s Cathedral or the House of Parliament. The 8-mile route also passes Trafalgar Square, the Bank of England and makes a loop over Waterloo Bridge. No wonder this free event draws dozens of thousands of people. The free ride starts at 9 a.m. in the Strand and Lincoln’s Inn Fields and finishes at the Victoria Embankment. All participants are expected to finish by 4 p.m.

Always good seeing everyone enjoying the sun out there and I was looking for anybody that I knew while riding around. Like a moth ro a flame everyone was commenting on the legend as always. I had almost forgotten how popular  he is at times and the smiles that he triggers in peoples faces never gets old. Finally I managed to find anc catch up with Jenny and a group of Bromptons. It would be a few more hours before the Brompton World Championships was set to begin so we  went around the course enjoying the sun, tunes and vibe fot he event. If any body has never been to an event like this in their own city, GO.

Met up with Mandy Glover who was riding the Brompton World Championships on behalf of my cycling brother Alan Knott who I have posted about before getting support for his JustGiving campaign (JustGiving Crowd Funding for Alan Knott) to get him cycling again. Link to post


Did about 2 whole circuits of the event and ended up near the Brompton area down The Mall. I didn't have any passes but thought I'd hang near by to see any folks I knew coming up. So many I remembered seeing us from last year. Jenny told me to wait a minute and she'll be back. Had no idea what she was up to but came back with a big smile and handed me a bright yellow guess past to the Brompton area. What can I say about who i affectionately call "Mile Monster" she is fast becoming a legend in her own right with all the rides and miles she clocks up.

First things first though as I promised myself the first person I wanted to see was my cycling brother Alan Knott. I have to say I was starting to feel abit emotional when I got close and just surprise hugged the guy. AS soon as he realised it was me he stood up and hugged me tight back. It was almost too much for me but I held it together.

As always the legend kinda draws people's attention when they go past, i always like the double take people do when the full force of the legend hits home :D

Finally it was time for the Brompton World Championships to happen. Wil Bulter Adams the CEO of Brompton Bicycle had a little speech for all the Brompton riders attending and handed the mic to Alan. I could see he was abit emotional and I got to say I almost teared up again myself. He told of  his story about what has happened to him how he has been keeping himself going with the help of his family, friends and his Brompton family. THATS how we roll when you buy a Brompton, its not just a bike your buying its a whole life style and family your buying into. 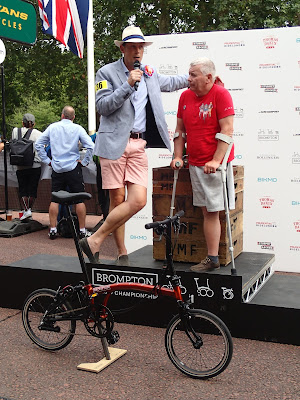 All these wonderful Bromptons around me made me remember how much I've missed my Brompton family. Pretty much everyone I spoke to was asking when I would be out riding more on events etc 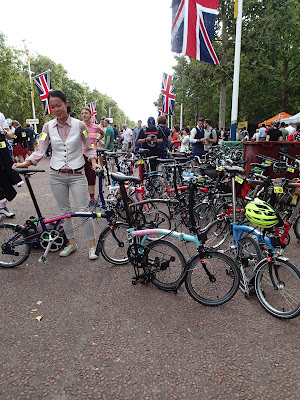 Some friends told me there was a painting of Bumble B in a further down and i thought eh? I had to go and look so I went down and found what they where talking about.

There was a competition on colouring in a Brompton bike and would be judged by professional graphic designers I think I remember and maybe get your Brompton made over.

To my surprise the sun was starting to get low and people started to leave. I had a good soulful chat with a few people who I haven't seen in a long while and said out goodbyes and promise to see each other more often on rides etc. EVen though I didn't race in the BWC it was a damn good day and I've decided to start training for BWC 2020.