Once again the London Brompton Club (web | fb group) had a great ride planned with David P leading as always. I had been looking forward to this ride as it goes right past my local area and also further north and into Epping Forest.

This morning I made sure I was FULLY fueled up and ready to go.
Also packed a couple of bananas & cereal bars just to be sure.


Looking at the weather, it was going to be slightly mild but may drizzle for a few hrs on and off before some heavy rain in the evening. This ride would be finished before the evening no problem in needing heavy waterproofs. My small waterproof jacket and my big over trousers that I always have packed in my Carradice Zipped Roll Saddle Bag would be more than enough. I need to get some compact overtrousers as my Altura Night Vision Over Trousers are heavy and take up ALOT of room in my Zip Roll bag.

Off we went to the meeting point of Charing Cross Station, commuting to my local station I could see the weather being overcast and hoped the rain would hold off till we had finished the ride and back home at "The HiVE"

Arriving at the station I saw a familiar group of faces & of-course Bromptons. A group of Bromptons always draw attention and as I was walking towards the group I over heard a few passers by commenting on seeing the Bromptons, some even wishing they had one as they looked like alot of fun.

I piped up and said "Hell yeah, ALOT of fun :D" with a big smile on my face.

As always big smiles and greetings to everyone attending the ride, there was supposed to be a decent amount on this one but a few couldn't join us at the last min for various reasons :(


On seeing me David gave me Anne's present which I was very curious about.

I had to laugh as I wasn't expecting this but Anne remembered when I helped her with a puncture on the LBC Ride: Gravesend Loop ride we was on that I said about getting some bigger gloves to carry when on a ride in case of emergency repairs. If no one knew about that they probably end up with other ideas to why I would need large latex gloves. :D


Off we rolled wondering though central London, even though it was dull we all had smiles on our faces as we was all on our Bromptons.


The roads I noticed where abit slippery in places so was glad we finally got on to the Regent Canal system. 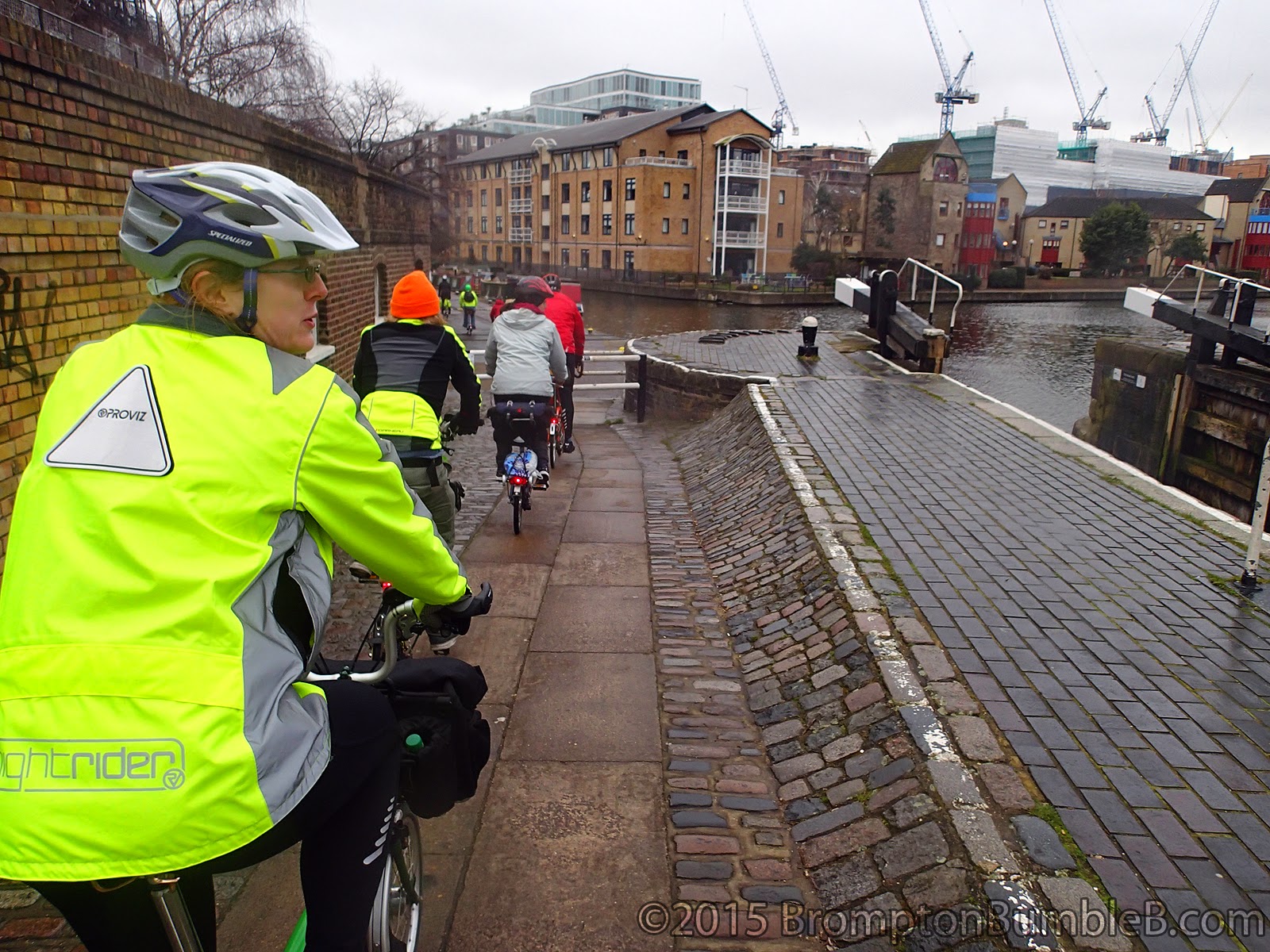 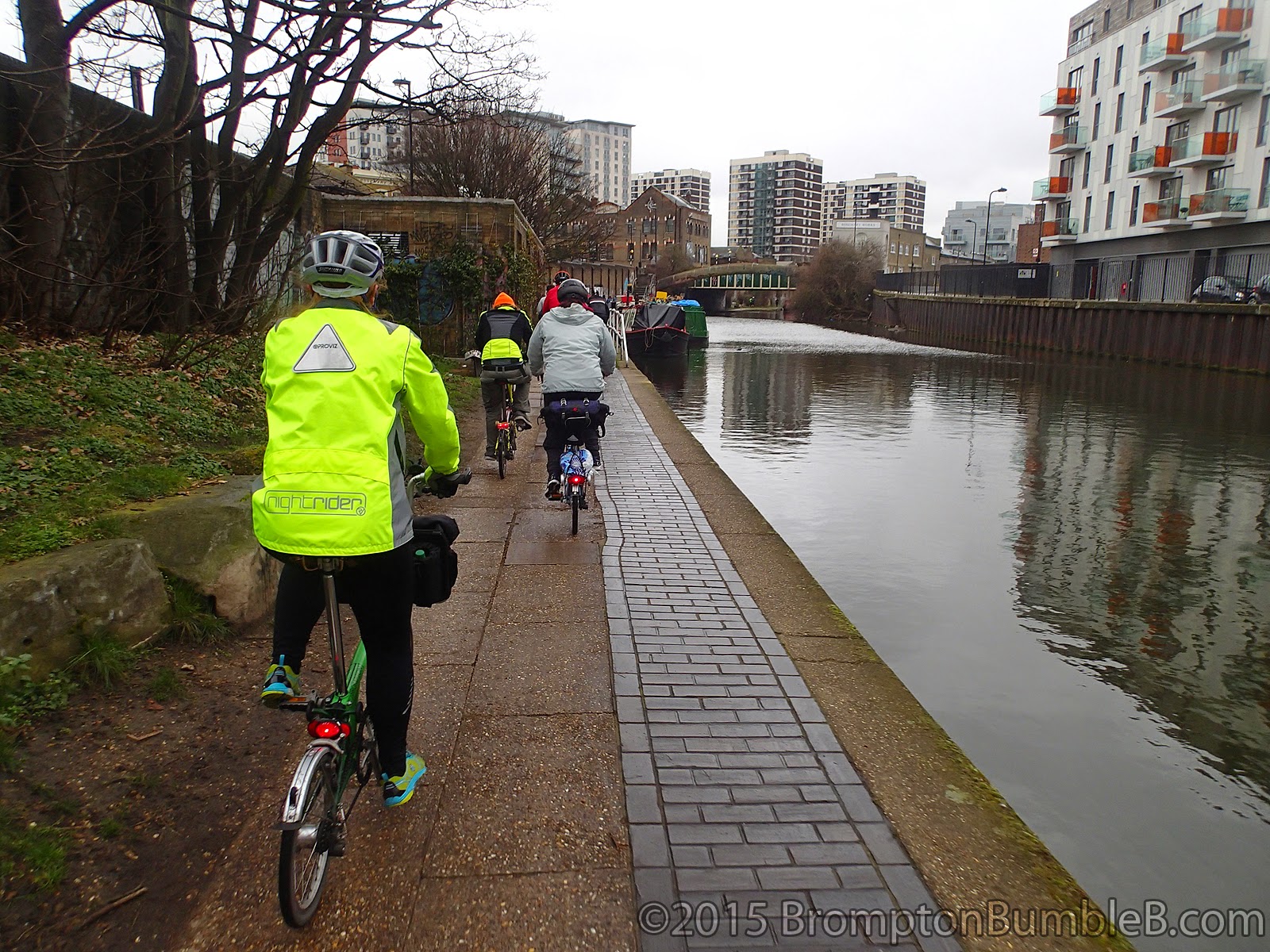 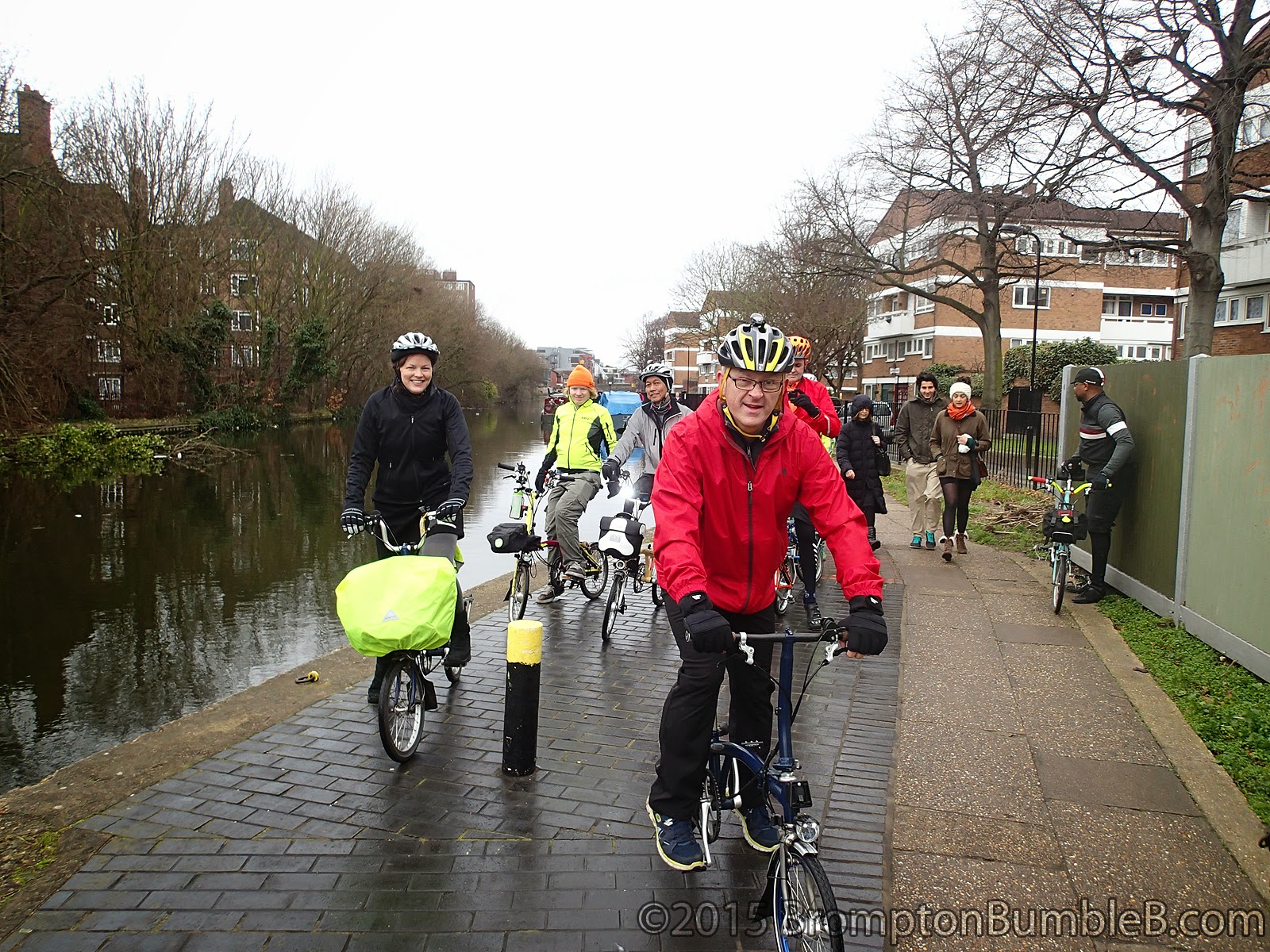 This part of the route is one I know very well as its my local haunt for riding in the summer time along the Regent Canals from central London to northeast London past the Queen Elizabeth Park and beyond. I was looking forward to heading further North this time to Epping Forest as I haven't been that far yet.

Just before Londonfields Park we passed though a very what I would consider POSH market. All kinds of cheeses, olives, cakes, designer clothes (made by the sellers themselves I would guess), cold &amp; hot meats. 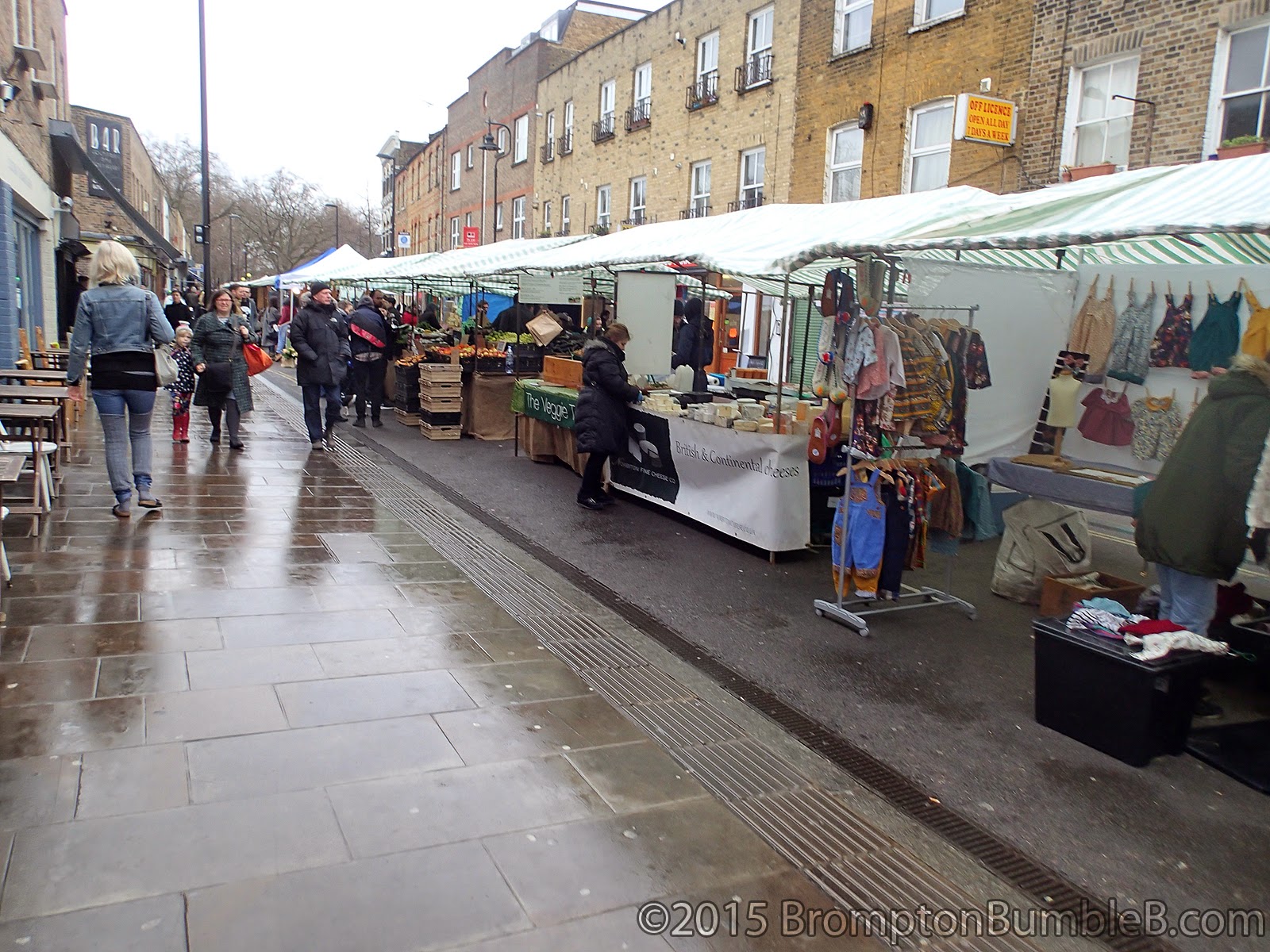 As we approached Londonfields Park. I remembered a couple of years ago The Dunwich Dynamo started here and the Legend and I came down to the start point to see some of the hardcore London Brompton Club riders off on their 120 mile night ride to Dunwich Coast. Yesterday I had bought my return coach ticket for Dunwich Dynamo XXIII on 4th - 5th July 2015, yup I've bitten the bullet all right. 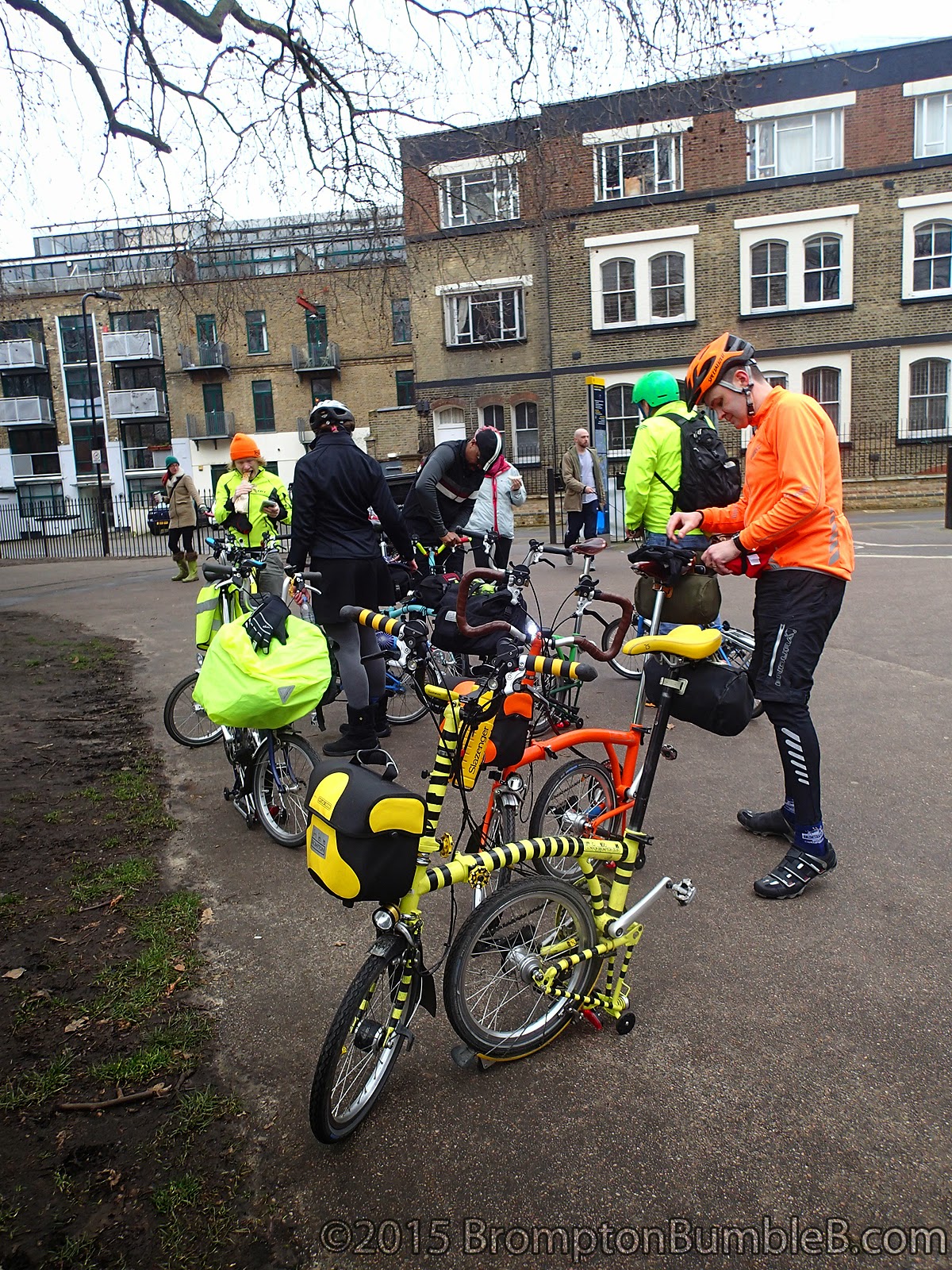 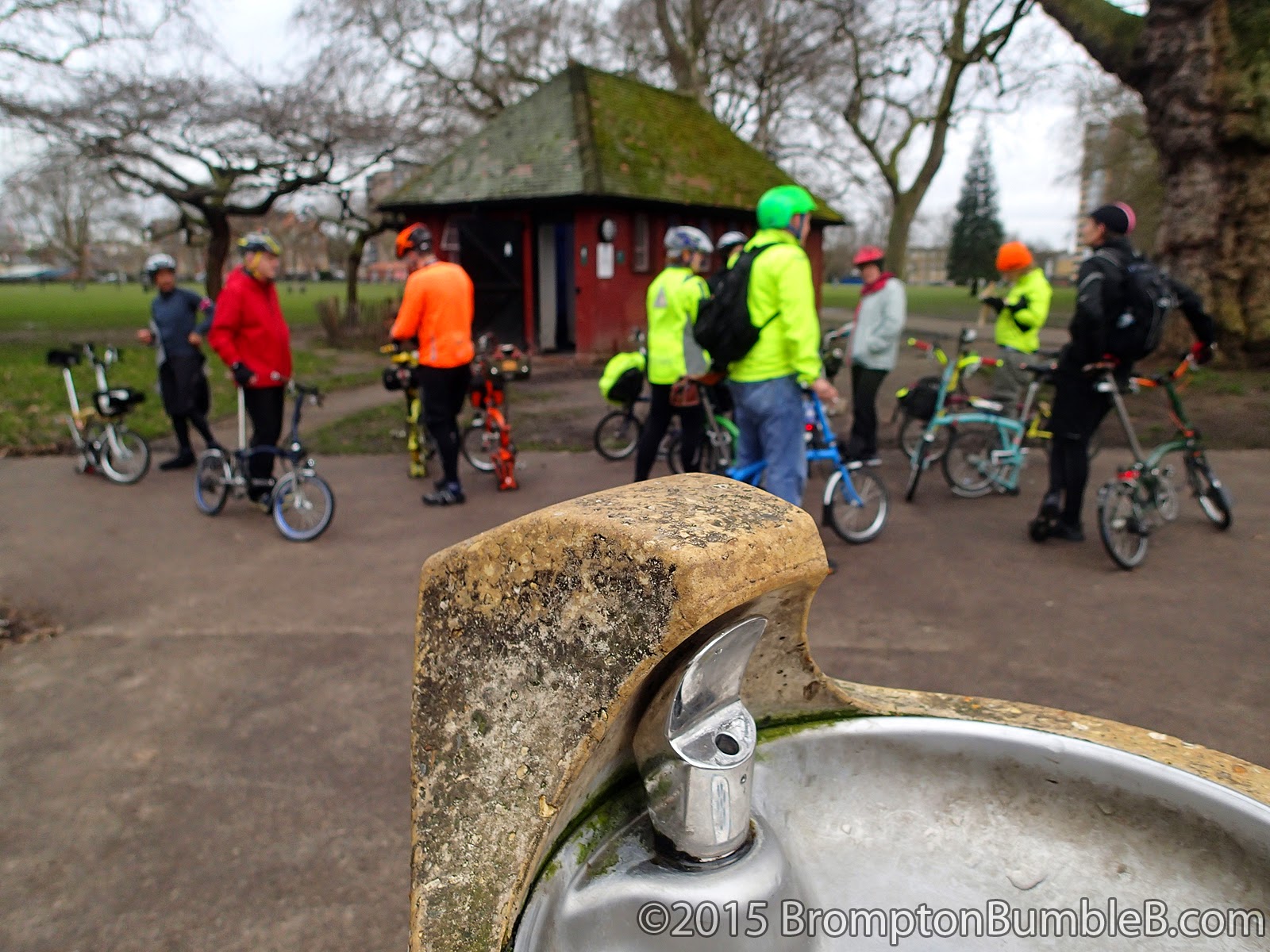 Another little toilet break here and I noticed that Francis M's Brompton with his new Blue rimmed wheels he got from overseas. I have to say they are pretty damn sexy and when BBB's rims need replacing I would love to get a pair of black ones with yellow spoke nibs (is that what they are called?) & black spokes. I think that would look awesome.

Thank you John M for correcting me "nipples"

As we was along the Regent Canals I noticed there was ALOT of people rowing and appeared to be in training as well. Sometimes we would come across their trainers on the path shouting out advise/orders to the rowers while cycling to keep up. As soon as I saw this I instantly thought of Chris Bridge who is a Rowing Cox and has a pretty loud voice. From what I heard of these Cox's Chris Bridge could easily outshout them without even trying. 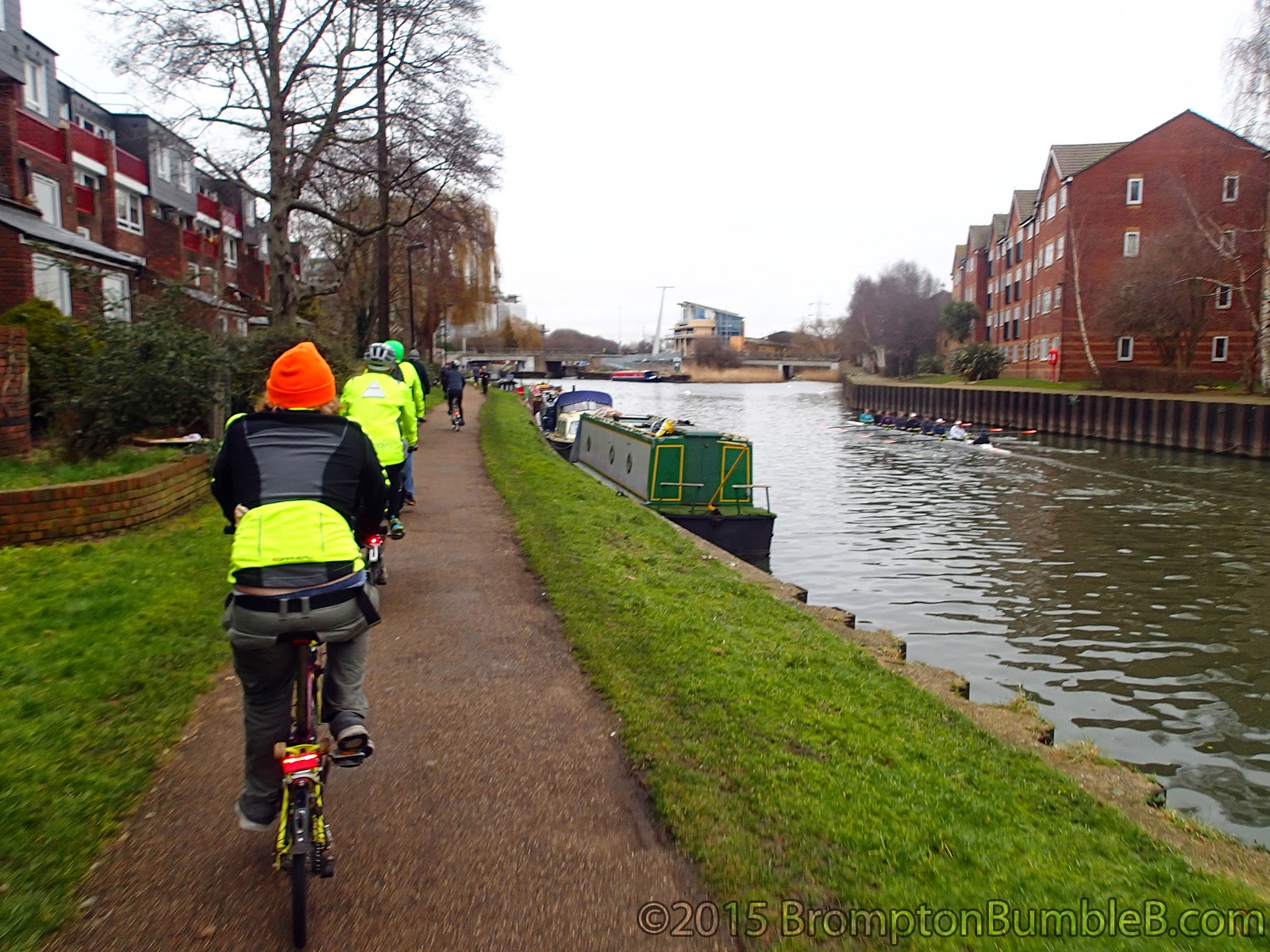 Not long after this I felt BBB's rear brake doing something odd. I've felt this only once before and I was hoping it wasn't what I thought it was. I had been worried about my rear rim as it looked pretty worn and have actually ordered a new rear wheel a few days ago because of the hub issues.

Well I'm afraid the rim failed on the drive side of the rim.


I've basically worn out BBB's rim & it can't handle the pressure of the tire and pushes out. Every time the wheel goes round I can feel it rubbing the brake block on that side. It isn't has bad as when I wore out the 3 speed rim back in 2013 though when I actually broke though the rim itself.


Lucky though as we was only a couple of miles from HiVE so we didn't have far to limp home.

Seeing my club cycling off into the distance I couldn't help but feel disappointed by failing to complete another ride. I know there was nothing I could do about it as it was a mechanical failure not a person failure like the LBC Ride: Gravesend Loop.

I hate not completing things that I have started to do, I like to focus totally on that task till I have completed it. If I have failed at certain things I learn from my mistakes, try again and at the very least go further than I did before. Bumble B will be out of commission till I have the replacement wheel which will be in around a week or so. While his out of commission I may take him to my local Brompton dealer to get his rear hinge replaced & could even see about a loaner Brompton.

I even heard that just after I had to retire that someone had a puncture, infact by the end of the ride there was 4 punctures & a leaky value. This ride had a big "body count" as it where. Had we angered the cycling gods in someway? who knows......

Until the next ride.....peace
BBB