I woke up Saturday morning hearing something tapping on my window. I didn't know what it was but at 04:00hrs I didn't really care & just rolled over.

I went to the window sleepy eyed & yawning. Opened the curtains and at first my brain could process that my eyes where seeing.

Rain was lashing at my window as the wind howled.

Tonight was the LBC Sight, Lights & Street Signature Ride.
The weather reports said it would unsettled weather though out the day.

Boy they had that so wrong.

I actually worked out that it was the London Brompton Clubs 2nd birthday. So it was kind of fitting to be doing the signature part of the ride later on which our navigational Jedi Master David P had worked out later that night.

Stepping out of Oxford Circus station I was hoping that the weather was gong to be good for this ride, I had packed everything I needed incase things did turn for the worse just incase.

I was meeting my partner in crime OrangeBrompton & my co-founder of the London Brompton Club MickB at Piccadilly Circus.

While I was powering down Regent Street towards Piccadilly Circus I noticed that BBB chain was slipping abit. I knew that it was soon to change his chain and rear cogs but this was the first time it was actually slipping ALOT to the point where BBB was almost becoming un-rideable.Seeing that this ride wasn't a big long hilly ride I continued and just made a mental note to get replacement chain and cogs as soon as I could & not to put too much power though BumbleB.

Managed to get to Piccadilly Circus and waiting for Orange & MickB to arrive so we could head off to The Lord Cyde Pub just on the southside of the river where a good friend of Mark W let us use the pub as a staging area to begin our ride. We have been to this pub last year on a similar ride and it was very kind of them to let us use it again. 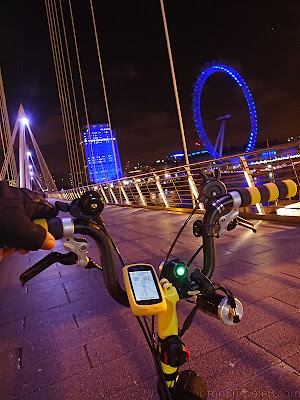 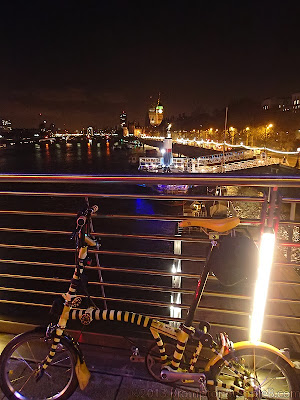 Having met up with everyone and saying hellos to a couple of the regular drinkers in the pub we started to head out into the London night.

Unfortunately Mark W (King of the Hills) couldn't be with us on this ride as he was working the next day but took the time to see us off. 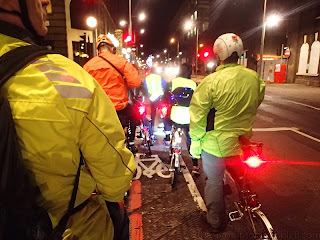 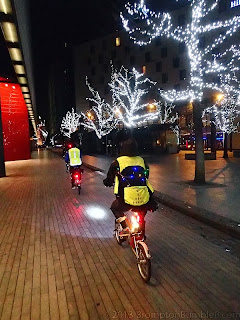 Off into the darkness. We went to a few of our favourite night time spots along the river. 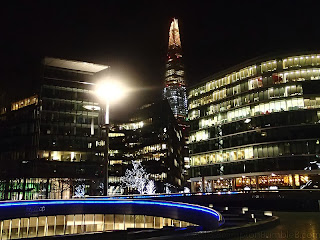 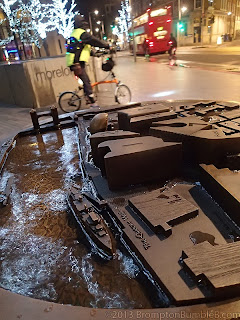 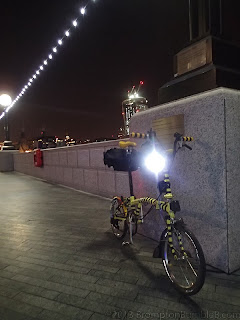 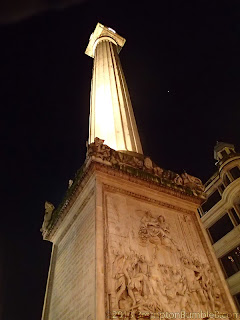 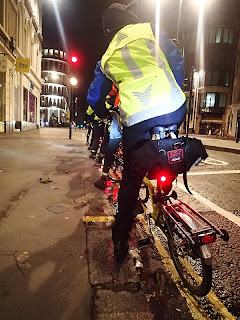 We headed off down towards Oxford Circus and someone spotted this great looking light archways. We had to stop off and get some photos, I decided to use my iPhone 5C's video function for the first time and see if I could get some video of riding though the arches


What I did find funny was that in certain places in London there is what can only be described open urinal. I've seen these a few times in central London and it was a shock to my cycling partner in crime to see. I couldn't help my giggle the whole time at the look of shock on his face.

Not long after this we started to loose a few riders as it was pretty late. The few hardcore of us where going to do the second part of the ride which David P had carefully planned out. We was going to spell out the letters LBC and track it using our GPS's so later on when you viewed the data you would actually see the letters LBC.

A pretty cool ending to the ride seeing that its the London Brompton Club's 2nd Anniversary.

This took us a little while and was abit of a hard slog but we finished it not long after sunrise.

We all headed back to Kings Cross where we looked for something to eat and found this place for breakfast. Interesting concept of having a full English breakfast in a little pot. Another good ride, actually it was 2 rides in 1. It was great seeing everyone as always and huge kudos for David P for the Jedi Master like navigation. If you look below at my Garmin data you can see the LBC letters we mapped out. Pretty cool eh