Today was promised to be a good ride with the iBikeLDN Summer Ride in good East London, along the Thames River. The weather was going to be good maybe a slight shower at some point but nothing major.

As always there was goging to be a good turn out by the London Brompton Club and we arranged to meet up at St. Paul's Cathedral before heading to the iBikeLDN starting point at City Hall.

On our way to City Hall we stopped of by an installation we have seen a few times for a few snaps as we had plenty of time to get to City Hall by the Thames River. 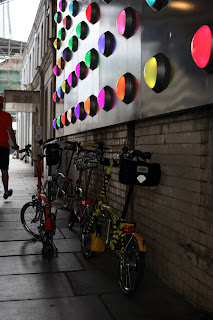 Gathering at City Hall I see some faces I haven't seen for a long time and some new ones. As always Bumble B is the center of attention. Sometimes I wonder if all this attention hasn't gone to his headset. *shakes head*

This is where my Brompton buddy Phil Sin gave me a little present, well a present for Bumble B that I will blog about later on. I was REALLY touched by it and can't thank Phil enough :)

After a little safety talk and roughly where we was going from our ride leader Anthony we walked along the Thames a little bit and headed off on route. 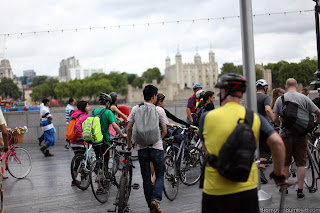 I definately like having music on these rides, I've even been looking into a small system for our LBC group rides. Maybe not as big as the music bikes on the iBike Rides. Watch this space ;)
As always whenever you see lots of cyclist rolling though we see people coming out asking what we are doing. I don't think they believe that we are just cycling to enjoy the sights of London and not protesting about something. Sometimes folks we ride for the sake of riding. We even beckon some if we see them with bikes nearby to come and join us. 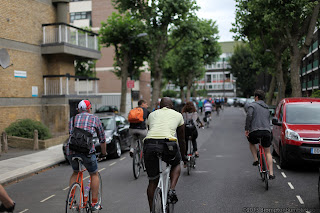 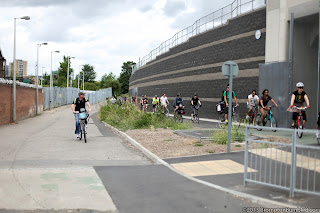 After the Southwark Park we heading off with kicking music blasting away. 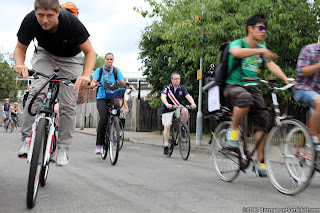 When we started to head up Greenwich Park it started to spit a little rain but we soldiered on and it only lasted a few mins. When we got to the top of Greenwich there was quiet alot of tourist up there anyway and when with about 100 cyclists rolling up we was quiet a spectacle. A BIG group photograph was needed so everyone gathered together. There was so many of us that my lens wasn't wide enough :D 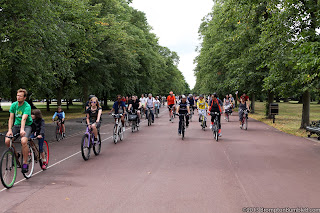 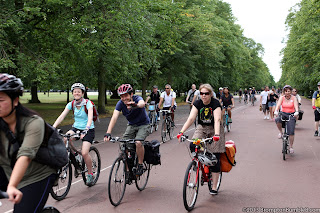 When we arrived at the tunnel it was going to take a long while for everyone to use the lifts so I just picked up Bumble B and ran down the stairs. Much quicker 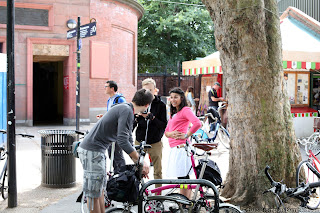 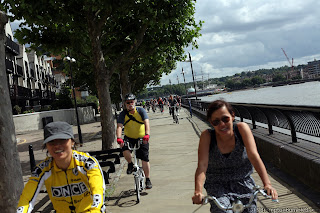 While riding near to the River disaster  struck, one of the music bikes had a puncture but no fear with so many cyclist around with tools we soon got the music pumping and we was on our way. 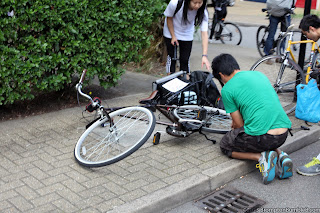 We had to catch up with the rest of the folks but we made it in the end. The sun was popping in and out but it was nice to sit on the grass relaxing. 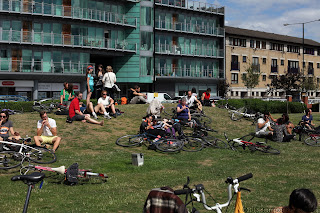 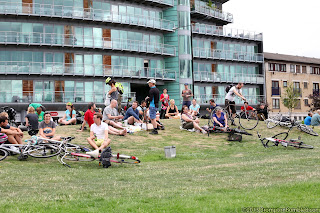 If your gonna relax do it right I say >:D my poor feet. 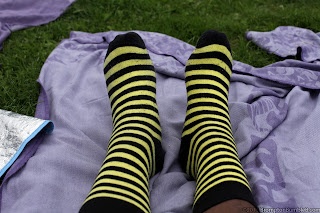 Well after while I decided to head off home, me & a couple of the LBC memebers where goig int e same direction towards Tower hill underground station and headed off saying our goodbyes to everyone and hoping to see them on other rides soon. I even gave out quiet a few of my Club cards to a few new Brompton owners and hopefully they will be joining the website and checking out my crazy ramblings here.

See you at the next ride