Well after the iBikeLDN last Saturday and seeing Mr.O with his saddle bag I definitely had to get one.

I bring you the Carradice Zipped Roll Saddle Bag (2ltr) in black.

Ordered it from the awesome folks at SJS Cycles for the silly price of £24.99, I feared that I would miss it as it would be posted by Royal Mail while I was out but SJS Cycles managed to pack it in a way that it would fit though the letter box, so no going to the sorting office a day later. 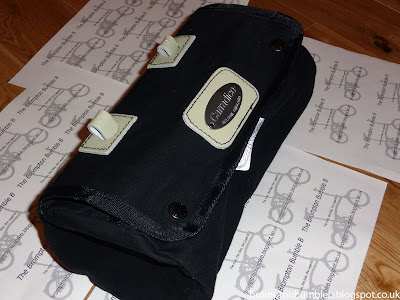 As you can see it looks awesome in black, it does come also in green with honey coloured straps but for Bumble B the only colour would be the black version. Big flap and then a large zip to keep everything inside and not spill out all over. Also a nice reflective panel, which I'm already thinking of some kinda of customization at a later date ;)

Reading the paper that comes with the bag its made of "Duck Cotton" which means it is completely waterproof, infact the wetter it gets the more waterproof it is as the material/stitching expands and closes off any gaps where water could get in. Also breathable and can be re proofed so in theory this bag could last you many yrs and many bikes

As with all Carradice products they are all hand made and signed by the person making them. Mine was made by Susan.

I haven't actually ridden with it mounted yet but I'm guessing my first outing with it will be on the LBC Ride: Greenwich Loop on the 17th November 2012. Will be posting about how it performs on ride soon...