Death of another rim

Over the last few months I have been getting the sense that BBB's rear wheel rim maybe wearing out. Under braking I would feel a "pulse" as it were. It's happened before so I know the signs well.

Ever since I got the new black AeroHeat rims I have been looking after them much more than the double walled original Brompton rims. Even with all the care I have taken with them the rear rim visibly split.

I basically came back from meeting up with the LBC gang that was having a ride down to the Olympic Velodrome at the Olympic Park. I wasn't on the ride itself but needed to see a few folks as I had some Brompton bits from "Ben's Box of Goodies" (once again thanks Ben)

On closer inspection I could see the rim had actually split on both sides of the braking surface as you can see with the photos below.


It was an emergency so I went straight to my local bike shop ran by Noah who now had his own bike shop just down the road from me. Noah was the first person to ever service BBB so I knew I could trust him with my boy. 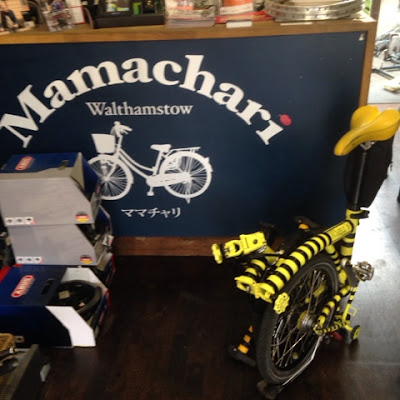 Noah changed the rim over to a spare original Brompton rim I had but told me that the AeroHeat Rim had some structural cracks. I didn't know about this and thought I had just worn it out but check this next photos out for the true horror. Another 2 huge cracks *shock horror* 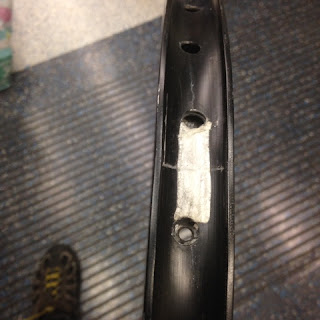 These cracks where on the opposite side to each other on the INSIDE of the rim where the rim tape goes. I wouldn't normally remove the tape to look so I wouldn't have seen it myself with my normal checks.

I thought damn I've been riding with that for at least a couple of months as that is when I noticed the "pulse" under braking. As you can see it hasn't been knocked or hit anything as the rim looks in good shape and lots of metal on the braking surface.

Quick message to Phoenix Cycles and looks like I can get it changed under warranty where I got the AeroHeat rims originally so BBB is there now getting another AeroHeat so his all matching again. The whole reason why I got both rims changed back then when only the rear rim had worn out was that he could be in line with his color scheme.

I currently have a loan Brompton which happens to be black and yellow so not to much of a shock for anyone seeing me without the legend who should be sorted over the next few days.