The legend does #DunwichDynamo XXIII

Last weekend we did the Dunwich Dynamo XXIII, 113 miles from Hackney, Londonfields to Dunwich Beach in Suffolk coast.

The last 2 years we have said that we would do the Dunwich Dynamo but due to work etc the human couldn't the last 2 yrs but this year, the timing was right.

Excited wouldn't even begin to cover it.

But first things first I had to figure out what I would take with me. I didn't want to be too heavy and only take stuff I would actually use on the ride. Figured out that if our average speed was about 12mph I would finish around 10:00hrs if we set out on the official start time of 20:00hrs. Checked the weather & any rain would be after 10:00hrs. Decided to leave my full waterproofs as I would only be used for a short period near the end of the ride and by that time I would be much into the ride to let a little rain bother me.

Packing my B'Twin 700 Ultralight windproof jacket that I've had for awhile as its much lighter and packs smaller than the B'Twin 300 waterproof jacket.

I took everything here but decided not to take the hydro pack & bladder at the last moment and very glad I did.


I wasn't sure about how many water/food stations would be on the ride but Daniel said his friend, who by the way had cycled all the way from Japan (not for the Dynamo I might add)would be taking lots of water for everyone to share if needed. So in that case I just packed a few electrolytes tablets to add to my water bottle when I refilled.
With my mind at ease on my water supply I loaded up with just the food, windproof jacket, spare long finger gloves, clear glasses, recharge pack in the Mini O bag & all my tools, spare tubes etc Topeak Aero Wedge saddle bag.
With the start at 20:00hrs & only 30min ride away, we had plenty of time get ready.
On leaving the HiVE I felt excited and dare I say it a little nervous. As I rode down to London Fields Park in Hackney the gentle humming of Bumble B settled me down some. When BBB hums I know his in perfect order and ready for anything.
We would be riding with what is now known as "The Bee Team" consisting of Jenny, Samantha, Daniel and a few others. 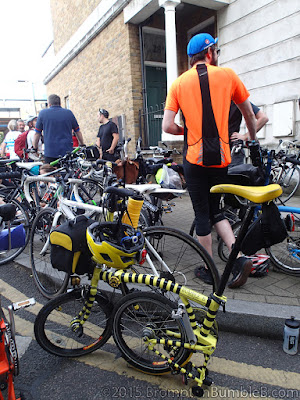 London Fields Park was pretty busy with riders of all kinds of bicycles of all shapes and sizes. Just before the start I noticed that BBB’s rear frame clamp wouldn’t engage properly after I changed out the suspension block. Lucky a fellow rider knew abit about Bromptons (works in Evans) and sorted the problem out short term that it would engage so that was 1 less thing to worry about. Cheers buddy you saved our bacon. 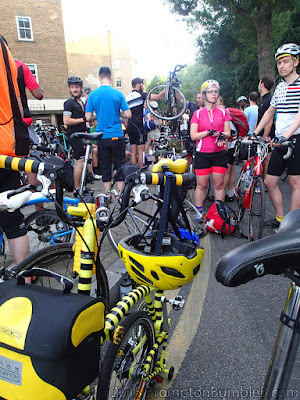 Everyone that we have ridden with in past events where there and it was a bit hard to see where my friends where. Just before the start I did manage to say hello to my cycling partner in crime OrangeBrompton. I knew I wouldn't be able to keep up with him on this ride but made sure we wished each other good luck and maybe see each other at Dunwich Beach.
As the official start time approached riders started to move towards the start line as it where. 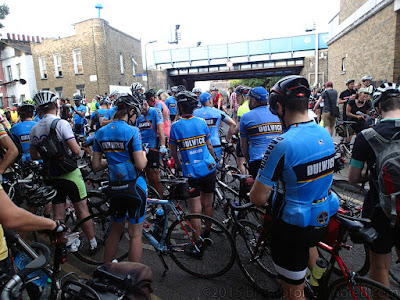 And we was off, our first few miles where just getting out of Hackney which I knew quiet well. Heading up towards Epping we went riding along the roads which started to get quieter and quieter. 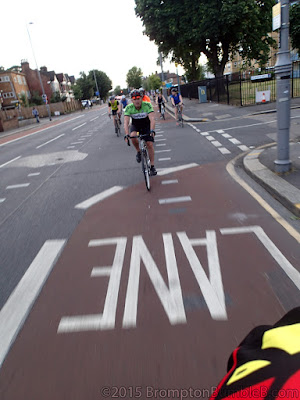 One of our first "pit stops" 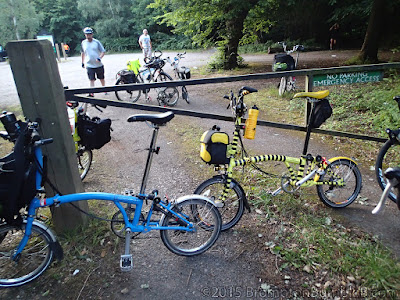 We was motoring along pretty good as the darkness came.
The thing I love the most about the Dynamo is that the pubs & halls along the way in some of the villages we pass stay open later just for us to get water, food & even beer for the hungry riders.

I have to say for an "unsupported" ride it was more supported than paid supported rides I have been on in the past. 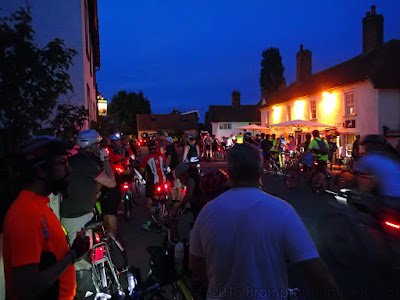 Eating up the miles the darkness was getting darker, even more darker in the countryside than in the city but with our lights we didn't have any problems seeing what was ahead of us. 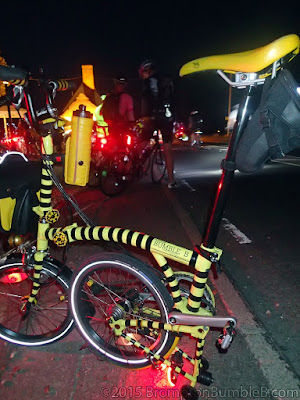 The food stations where coming thick and fast. I had no idea there would be so many food stations as I could have packed a lot less sandwiches. Definitely glad I left the hydro pack at home as I wouldn't have needed it.

Our first major food stop and a well earned break around the 50 mile mark. 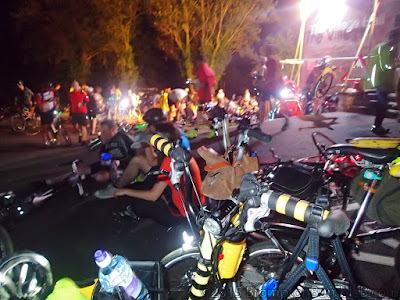 OH MY GOD that spicy soup thing was AMAZING. My compliments to the organizers at this half way pitstop. Saw a few faces that I have seen on a number of rides in the past and was good to say hello and give each other abit of encouragement. 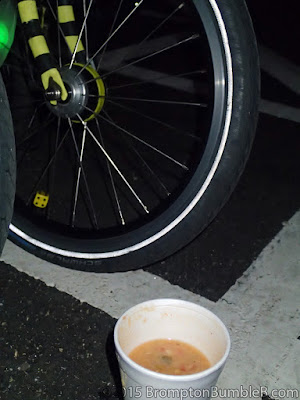 Seriously it was AWESOME & SPICY! 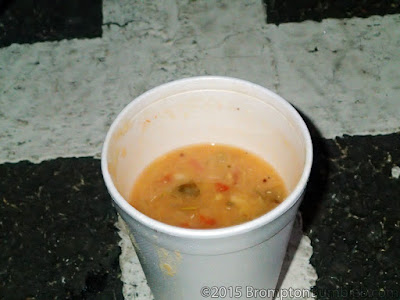 After having that amazing soup I felt I had been completely recharged and ready for 200 miles :D

Well it was time to eat up the miles, we still had a long way to go so lets get to it.

Getting into a good cadence we kept a decent pace going, the new change in my rear cogs was paying off as I was spinning less but kept a good speed going.

Finally we could hear the morning songs of the birds surrounding us. We dawn was arriving and it was going to be a lovely warm day. Cycling though the night every so often we had to put on an extra layer but then find we had to take it off again as we got warmer. Most of the time I just put on my windproof jacket which worked a treat.

Cycling though out the night does funny things to a person ;)

I have to say I was still surprised by all the support we was having along the way, even at silly o'clock in the morning there was people supporting us, cheering us on, keeping us supplied with water & snacks. Even my cycling partner MyOrangeBrompton was sending me txts every so often giving me encouragement as we went which was a HUGE help too. 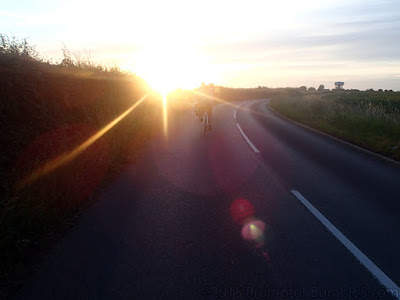 As the sun came to greet us we where starting to really eat the miles up knowing that our goal was so close and we had definitely broken the back of this ride and where going to make it all the way to the Dunwich Beach. 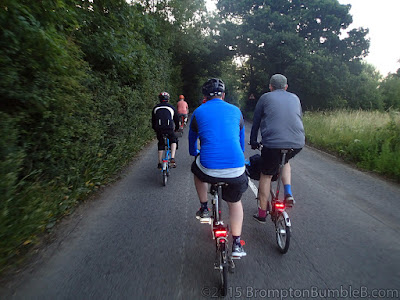 Another very welcome pitstop where we could have a pretty awesome home made hotdogs and coffee. This “dog” was the best hotdog I’ve ever had, very tasty and made by a very worldly cyclist himself. 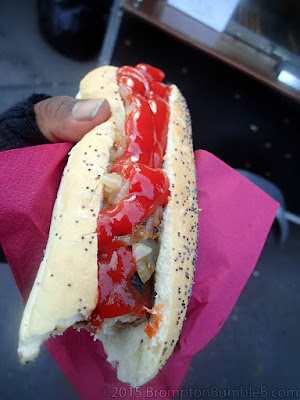 For some of us it was all to much and just had to catch “40 winks” poor Gus :D 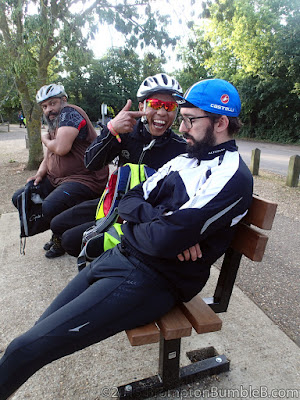 We was getting very close now and I was keeping an eye on my Garmin Edge 800 as I’ve always wanted to take a photos of the screen as it hit 100 miles. 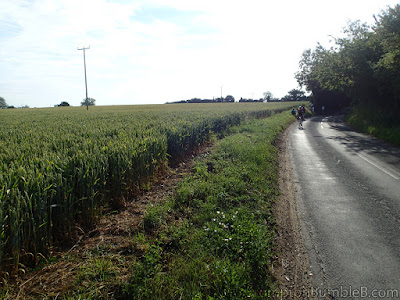 FINALLY it’s happened. I’ve previously done a 100+ mile ride but this was on St. Crispin's Day ride and with the clocks changing my Garmin crashed and lost  over 90miles worth of data. As they say “If it isn't on strava / Garmin connect it didn’t happen”


Just another 14 odd miles left now and no more hills to speak of. I could feel the change in the air and actually started to see some cyclists riding back to Ipswich Station to catch trains back to London.

On this section of the ride we past a young chap and his dad cycling together, I have to say this young lad was about 10 yrs old maybe younger and this kid was really giving it some. A few times he even passed "The Bee Team" and it was actually getting hard to keep up with this kid. I thought seriously this can't happen and I have to say I did have to put it a decent effort to keep ahead of him which was pretty embarrassing but DANG his fast. Oscar was his name and his been doing the DD for the last few years :D *kudos kid* 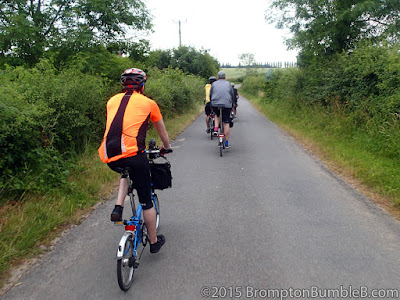 But then I caught someone saying there where cycling all the way back to London. The Dunwich Dynamo Double?!?!?!? Yup nearly 230 miles round trip. Pretty crazy but these guys where HARDCORE. 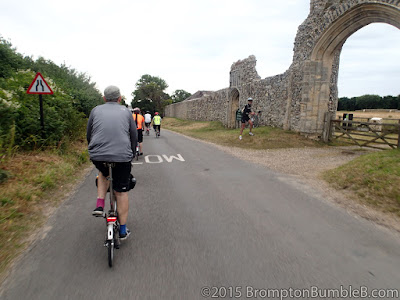 Finally we rolled up to Dunwich Beach itself.
WE HAD MADE IT. The Dunwich Dynamo XXIII was in the bag, JOB DONE! 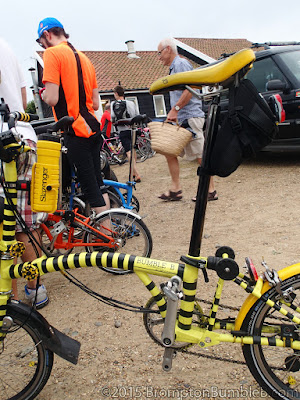 Just after we arrived at about 10:10hrs it started to rain. I’m truly glad it started just after we finished cause doing all that and in the last bit get rained on, I wouldn’t have been a happy bunny at all.

Checked my mobile and had got another txt from my cycling partner MyOrangeBrompton saying he just saw me as he was leaving on one of the out going coaches and said well done.

I did get the chance to have some food as I waited for the 12:00hrs coach back to Surrey Quays.

We had to wait awhile for our coaches home as there was major traffic getting in and out of Dunwich as you could imagine. Finally got on the 12:00hrs coach with BBB safely tucked away in the luggage compartment of the same coach so I didn’t have to wait around at the drop off point to get back to the HiVE.

Just managed to snap this quick photos of everyone on the coach fast asleep, well who can blame them, I didn't stay up much longer after taking this snap but you can see I'm still buzzing abit from doing my second 100+ mile ride.

I'd like to thank EVERYONE on this ride, my fellow cyclists, the cheerers, the pub landlords (for staying open a few more hrs for hungry/thirsty cyclists), coach drivers & loaders, the staff at the Dunwich Cafe...... and many more I've probably forgotten.

It was an AWESOME ride and with friends made it even better, couldn't have done it without you ALL.