The Edinburgh Bicycle Cooperative in Sheffield do a great little annual ride. My good friend Alan Knott invited the legend down and we of course said yes.

Driving down to Sheffield I knew there would be a few hills on this ride but me and the legend where ready for them all. Arriving a little late for Edinburgh Bicycle Cooperative (who kindly allowed me to park my car for the ride) but lucky there was someone there waiting for us to get to the start point. After suiting up we went into the centre of town where another ride was taking place which was a part of the #space4cycling campaign. It’s always good to see fellow riders from the north as I don’t get to see them often, especially my good friend Alan Knott. 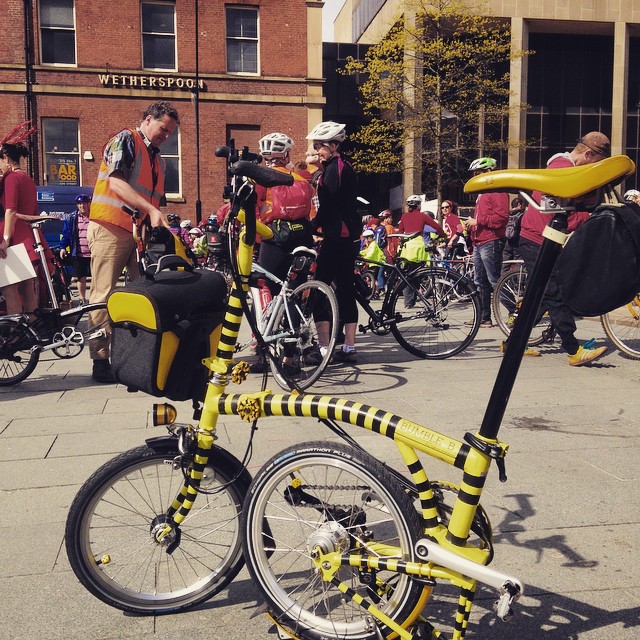 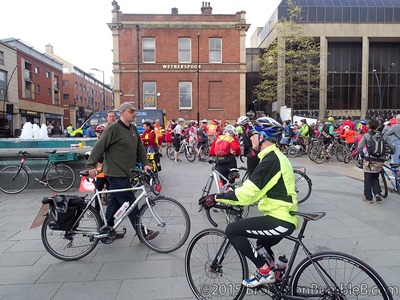 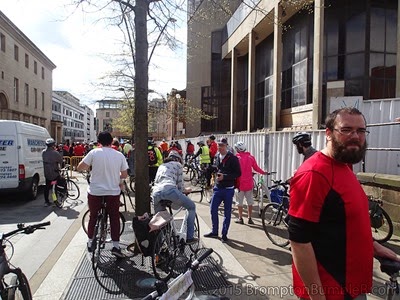 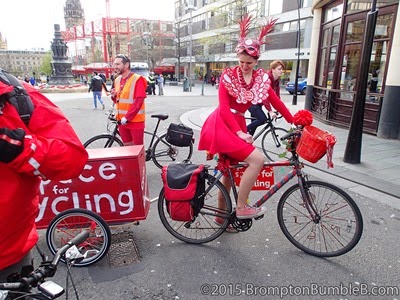 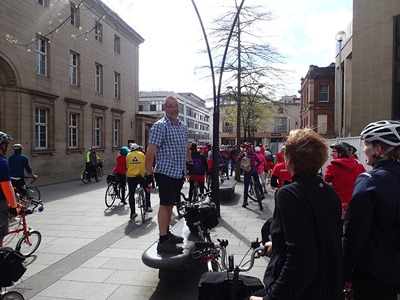 We only joined the #space4cycling ride for a few hundred yards as we heading out of town to kill some hills. 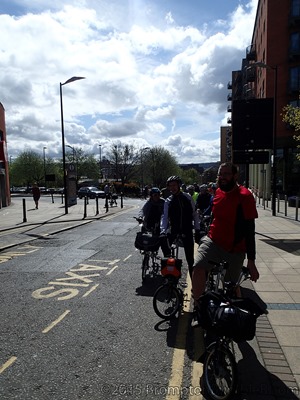 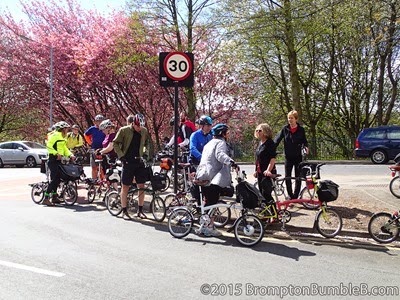 As always the pace was good one which everyone could handle and everyone making sure they got any turns we did and kept together. 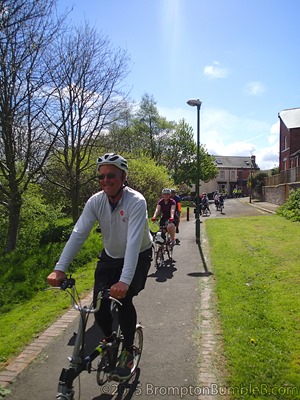 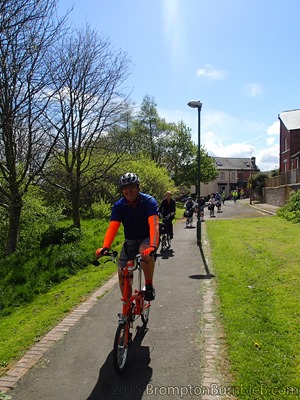 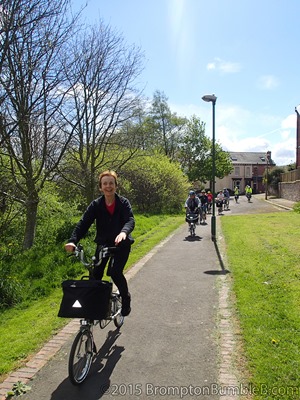 As you can see many smiling faces on this ride. 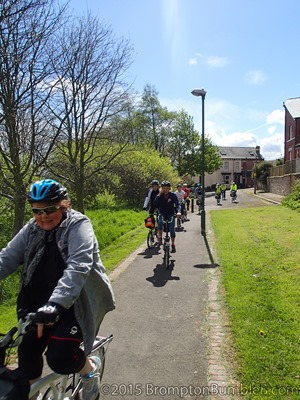 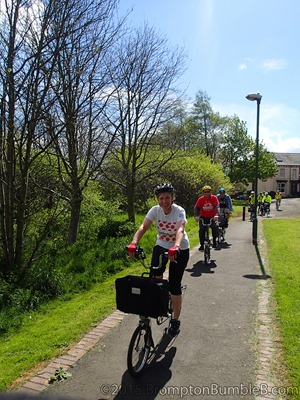 One thing about Sheffield is that it has tram lines, so you have to be pretty careful where you ride in the town as with small wheels they can fall in to the tram tracks. As we made out way out of the busy streets the hills started to loom ahead of us. I wasn't looking forward to this but I just put my head down and kept going as best as I could.

According to Strava there are 2 Category 4 hills, Kirk Edge Road. This surprise cycle art was great and we did see quiet a few other riders out on the road training with big smiles when they saw a peloton of Bromptons. 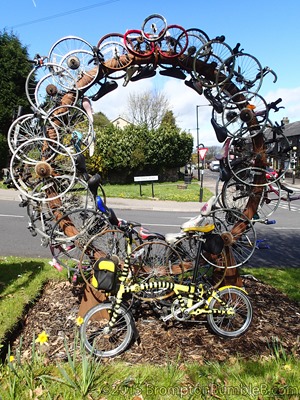 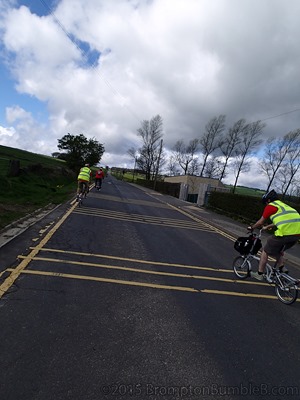 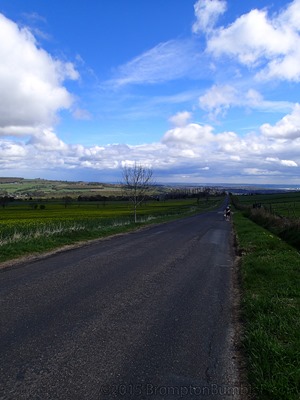 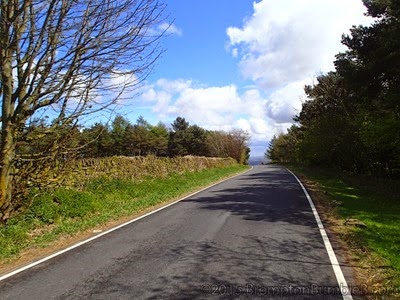 I have to say when I did get to the top there was a lot of cheers and clapping from the others that had already ascended this hill. It was abit of a killer but now I knew there was the fun bit, going DOWN….. 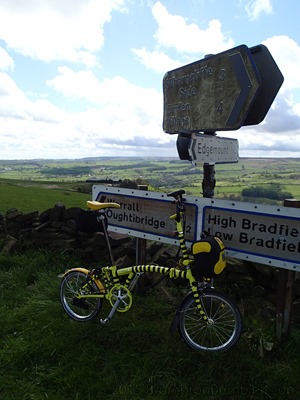 A couple of shots of the summit & a breather. 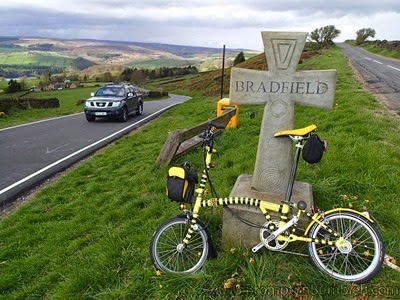 I will admit I stopped a couple of times on the proper big hills but on the really big one after what looked like I was getting left behind I got into my rhythm and actually caught up and over took a few people which I was pretty surprised at. When I did get to the summit I didn’t feel as bad as I thought I would but then it could have been the cheers and encouragement I was getting.
Going down was a little more trickier than going up as the road was a little more winding and the road surface wasn’t as good either. Took it pretty easy tow hat I normally do and once we hit the bottom of it everyone waited. While we was waiting someone suggested about feeling our rims to see how hot they where. I could have fried an egg on BBB’s to be honest and I wasn’t going that fast either.
A few hard-core riders went around the Damflask Reservoir while we waited. It did start to rain a little at this point but wasn’t too long. 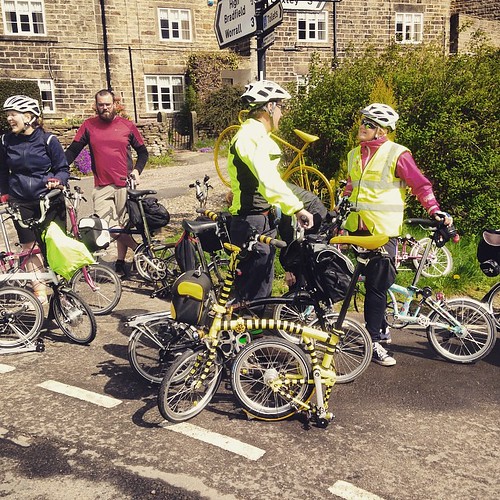 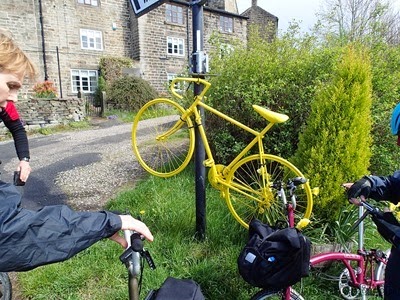 Finally we made it to our little lunch spot which I have to say was a real god sent as I was hungry as hell at this point. Ordered up a Cajun Chicken Burger and of course desert Sticky Toffee Pudding. I was quiet surprised when it did arrive as the portions where HUGE even by my standards. So big that I couldn’t finish my main course but definitely tackled the dessert and won. No dessert will ever get the better of me EVER. 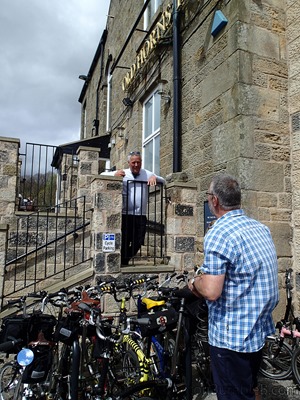 The ride back was a little slower as we all had a little more weight to carry due to the damn good food at the “OLD HORNS INN” but thankfully it was mostly level. It did rain a little but not much when we was leaving this fine pub. 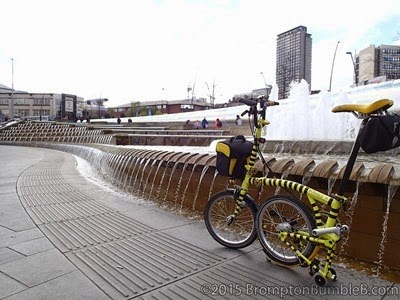 When we did return to Sheffield Town centre there was ALOT of police vans around, it seemed we had just come back when a big football game had just finished and the fans where returning home after the game. After arriving back at the rail station a few had trains to catch back home. I had another little ride back to Edinburgh Bicycle Cooperative to where I had parked the car.

Many thanks to Alan Knott for inviting me & Ian Joustra for leading. Good to see everyone at the ride that I haven’t seen for awhile and seeing a few new faces. Hopefully will be seeing a few at the Brompton World Championships in London in a few months if not sooner.

till the next ride…..bee safe
Posted by Brompton Bumble B at 22:30