So my cadence and speed sensor died a good few months ago on the legend  and seeing recently I gave him a really good Spa Day at Brompton Junction London I thought I'd get him fully loaded again.
I use a cycling GPS (Wahoo Elemnt, which I may change to back to Garmin in near future) which can connect other sensors for heart rate, speed, cadence and others for more data gathering to help with your training and logging mileage.
Because of the Brompton design with the foldable rear frame you can't just buy any cadence and speed sensors. Most of the current designs are either 2 separate devices or a small all in one device but because of the design of the folding rear frame those all in one small devices won't work.You can also get sensors that attach to the wheel hub but I've never used or trust that design personally.
I found the (PowerTap ANT+ Dual Speed Cadence Sensor) a the design could be used on the Brompton.  After +3yrs of used attached to the legend i had to change the battery but i found that the battery cover wouldnt lock anymore due to the plastic degrading. This particular sensor appears to be now discontinued. So went looking and found the POSMA Bike sensor which was very similar design to the PowerTap. 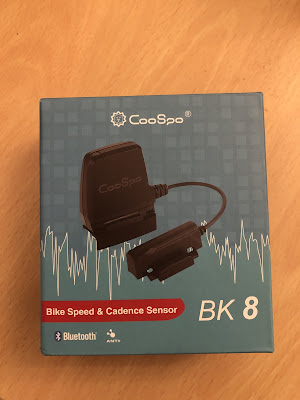 Attaching the sensor was just as easy with the original sensor. I actually attached it the wrong way round as the original sensor the larger box sensor was actually the speed sensor and the small part monitored the cadence.  So flipped it around and paired up within seconds to my Wahoo Elemnt via ANT or Bluetooth. 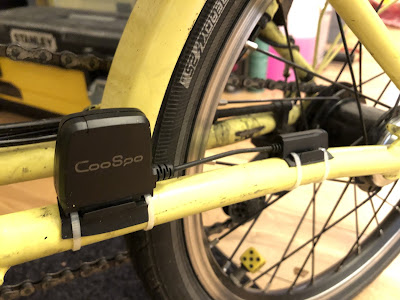 Please note you wont get speed data using this sensor when using Strava as Strava get speed data via GPS
Amazon Link POSMA BCB30 Bluetooth 4.0 & ANT Smart Wireless Waterproof Fitness Tracker Bike Speed and Cadence Sensor
For £40 UK Pounds you can't go wrong with this. Other designs I've seen are lot more cost and the design where they attach to the hub are alot more expensive & bulky.
till the next ride, bee safe.....
Posted by Brompton Bumble B at 08:12