This event last year was our first "Century Mile Ride"  we had ever done and had great memories of it. As soon as we found out it was open for registration for 2015 we of course entered without question, In matter of fact we entered twice by accident we was THAT excited about it.

A quick email to the head "Minion" Rob and everything was sorted but at the same time we also had the honor of being made"Brompton Minion" by Rob and asked me to get as many London Brompton Club members to attend this ride. When entering this ride each rider gets a cycling cap & bottle of wine/juice. We of the London Brompton Club would be getting a specially designed limited edition version of the caps which was an added bonus for our members.

On the day of the ride I had to change BBB's rear tire as I noticed the sidewall of my Schwalbe Marathon Plus tire was looking abit odd. A possible sidewall failure which we have had a few times in the past, so better to change it out now than wait for it to fail on the out on the road especially on a 100 miler.

Bumble B was prepped, cleaned and ready to go. We was meeting a few of the LBC clan at Wellington Arch at Hyde Park Corner, Geoff guided a small group of London Brompton Club members to the start at Chiswick Boathouse 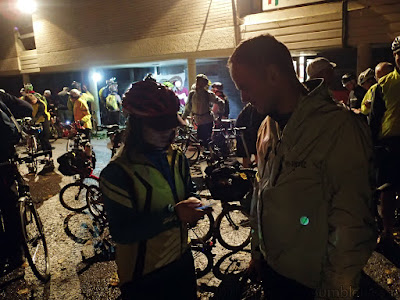 Getting to Chiswick Boat House in good time we all signed in, got our passports & cycling caps 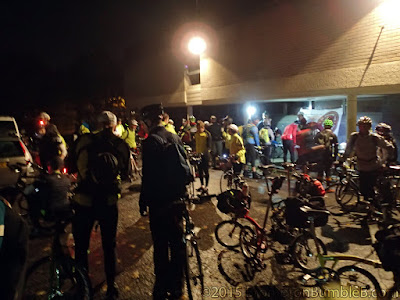 On the stroke on midnight we all set off. This would be a the first cold ride I've been on for quiet a awhile but I made sure I layered up properly and never felt the cold at all other than the exposed areas of my face. The route was taking us though central London showing us a few sights before we headed out west towards the first cake stop at Halliford Mere Lakes and Pavilion.

Coming up to the 30 mile mark I wasn't feeling so great. I felt very drained and hardly any power in my legs. I was really needing to get to the cake stop pretty badly so I could have something hot to drink and rest a little.

Once again it was a little hard to spot the entrance and I heard a few riders missed it completely. Lucky I remembered from last year the entrance and called out to the rest of the LBC that I was with that we nearly passed it. 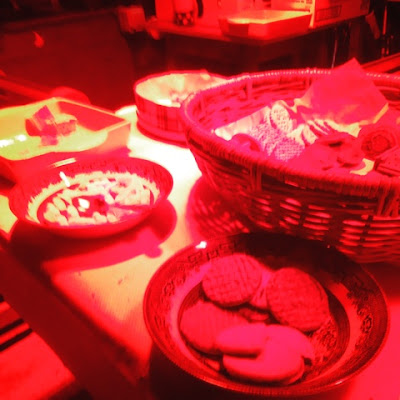 Hot chocolate and a few slices of lemon cake & I felt a whole lot better. I guess I was "bonking" slightly as to why I felt so bad earlier plus it was pretty cold night even though I had layered up properly..

Our little group left the cake stop but we went the wrong way. We was supposed to go anti-clockwise on the loop that would take us to the Twyford to pick up the wine/juice & have hot food.

We had gone to far to turn around and go the right way so we just continued as it was the same distance anyway. Thankfully James & Simon where great at navigating our way to Twyford which was a welcome sight.

Got into the hall and was greeted with the smell or hot food and drink. But first things first I had to sign in and get my little "passport" stamped. I was greeted by a few of the LBC members who had gone ahead. Big smiles and greetings exchanged. Then I knew I had done the big chunk of the ride and it was just a mere 44 miles back to the end. After wolfing own a great  chicken stew which I remembered from last year and tasted just as good if not better. 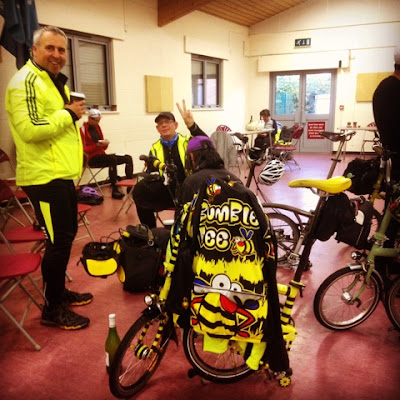 Our little LBC gang left the warmth of Twyford Scout HQ & back into the darkness. 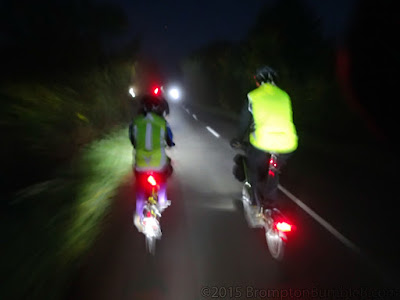 It was time to eat up the miles and get this ride finished with. With the darkness & cold finally giving way to the light & warmth of sunrise we could all feel the energy returning. 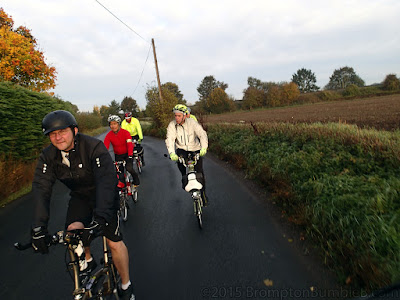 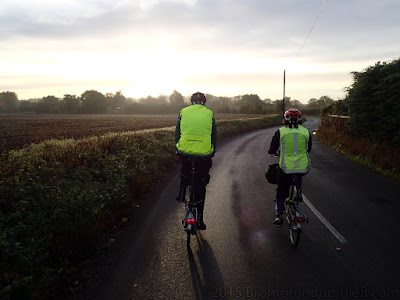 The 30 odd miles to the the Halliford Mere Lakes and Pavilion for the final cake stop and refill. I charged up my Garmin Edge 800 making sure I didn't stop it to make sure I didn't loose any data like I did last year at this time. Didn't stay too long this time as we wanted to really get the ride finished with as tiredness for me was starting to catch up with me again. It's been a long time since I've done a long ride and I knew my fitness level wasn't as good as it should be. 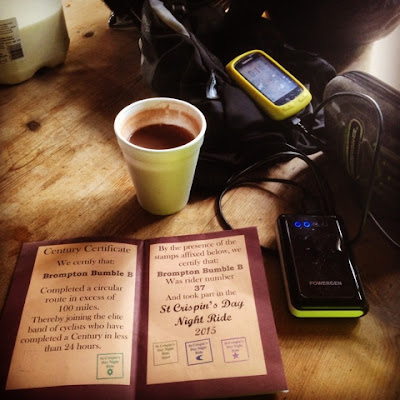 Another Hot Chocolate, a few biscuits, water refill and a quick photo. Kind of missed the view when we first got here

On the way to the finishing line we passed though Bushy Park right next to Hampton Court Palace, We stopped for a little photo with the gang. 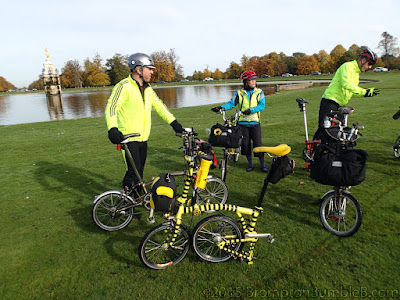 We was coming up to the 100 miles and felt good seeing it on the Garmin. Just a couple of miles later we was done, my 2nd century ride in 2015 & my 3rd one ever.

It was a great ride and good to see all the St. Crispin's Day Minions again. 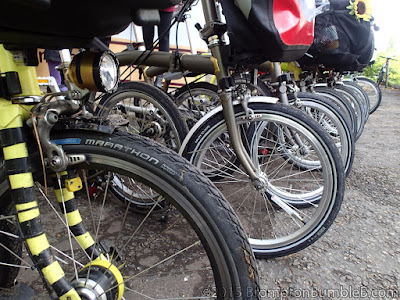 After a few photos had to tackle the most important thing the bacon roll and lovely cuppa tea. 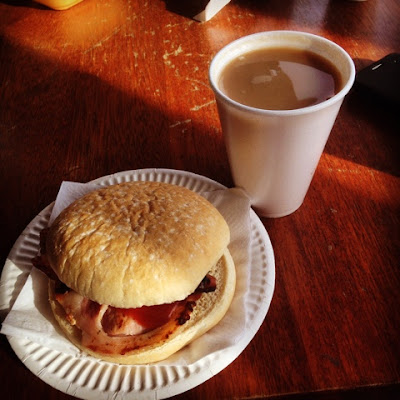 As always here is my cycle data, this time COMPLETE :D

Just before leaving I noticed you could purchase one of the St. Crispin's Day cycling jerseys & for £5 you couldn't go wrong. Luckily I managed to get one in my size which I wouldn't be surprised was the last one. 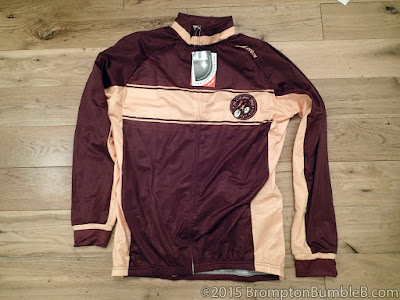 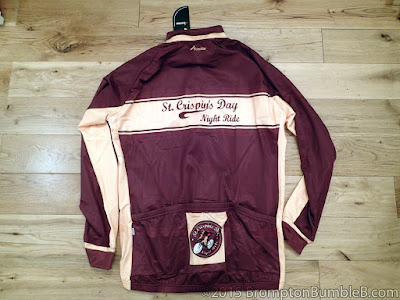 It's not as thick as my Bumble B winter cycling jersey, especially along the arms but then again I think this cycling jersey is more for autumn than full on winter. 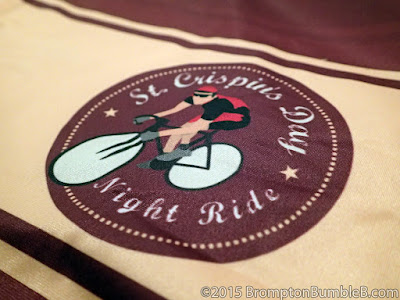 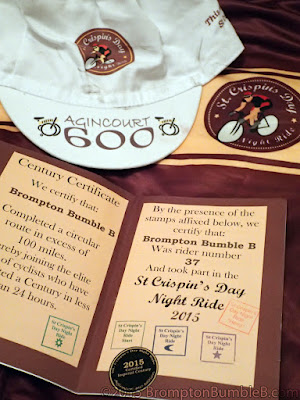 Want to thank everyone that attended the ride, cheered us on and everyone at the pit stops along the way and organizers of the ride. I especially love the custom Bee cycling cap Rob sourced for me as well as a few Brompton specific caps for the rest of the London Brompton Club.